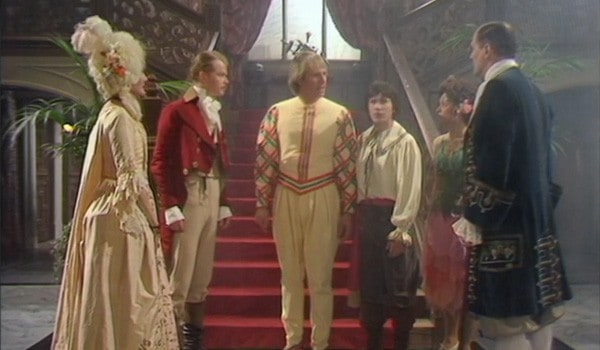 I’ve looked at some of the best historically-set Tom Baker Doctor Who serials, and next up is what many call the last “pure historical” Doctor Who story. By that, they mean that there are no sci-fi or fantasy elements other than the Doctor and what he brings with him. That style of historical is was only done rarely during the first and second Doctor’s eras. Black Orchid (1982) is a short ‘n sweet two-parter where the fifth Doctor (Peter Davison) and his companions Nyssa (Sarah Sutton), Tegan (Janet Fielding),  and Adric (Matthew Waterhouse) land in 1925.

At Cranleigh Halt railway station, the Doctor is mistaken for a cricket player — appropriate, due to his costume. Though I really wanted one of his space-born companions Nyssa or Adric to comment about why are all these other people dressed just like the Doctor? Tegan, being an Australian flight attendant from the 1980s, would already recognize the cricket whites. Basically, this extended scene gives Peter Davison a chance to indulge his love of the game. 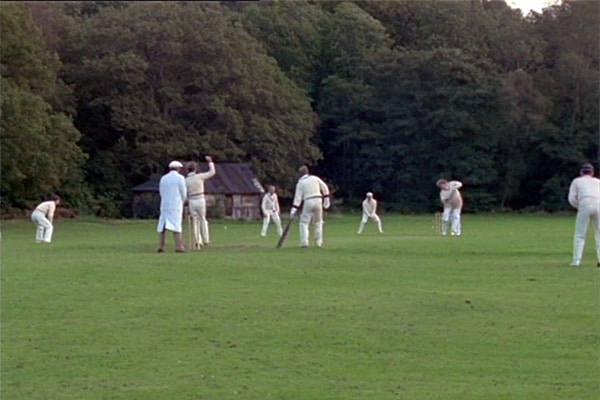 As he’s such a good player, he and his companions are invited to stay at Cranleigh Hall, where they’re throwing a charity masquerade ball. Oh, and a murder has happened, which the Doctor will discover … and another murder happens, that he’ll be accused of. The murder-mystery is terribly obvious, of course, and it’s all an excuse for the characters to enjoy some fancy dress. Plus, one of the young ladies in the house is twinsies with Nyssa — actress Sarah Sutton gets to play a double-role as the posh young Ann Talbot. Double identities and masks then becomes a theme. It’s all quite cute and light and fun, with a bit of casual racism thrown in (was that lip-plated South American Indian necessary?), which seems par for the Doctor Who course of this era. 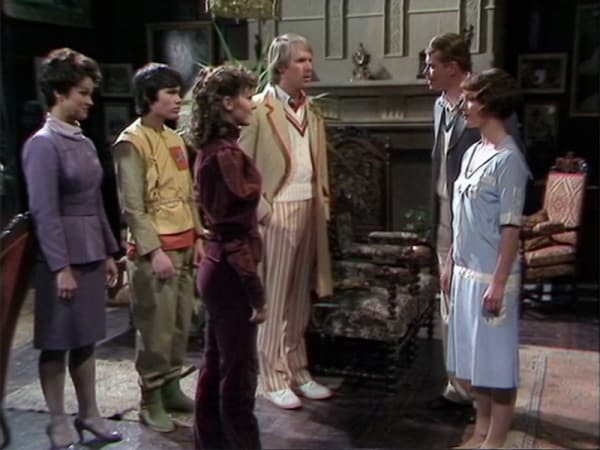 Nyssa, on the left, meets her doppelgänger Ann, on the right. Ann is wearing a nice sporty 1920s dress with a dropped waist and sailor-style collar. 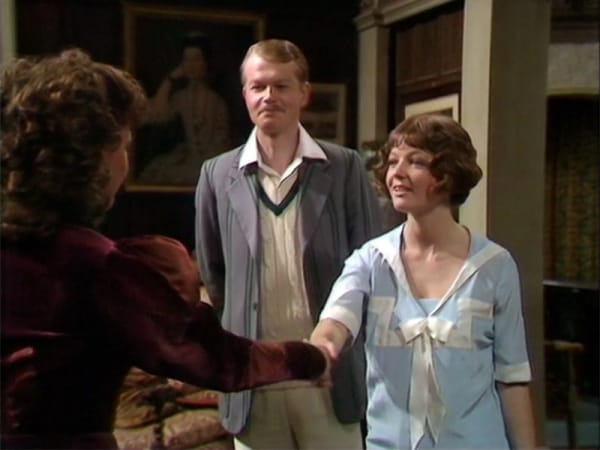 Better view of Ann’s dress. The collar has both the sailor collar & an interesting detail below that.

What about the costumes? The 1920s stuff is perfectly nice, as it should be when you’re drawing from the vast BBC warehouse of early 20th-century garb. The masquerade costumes are more “modern costumey” than “1920s-does-costumey” IMO, but it’s fine, especially in one notable case that I’ll get to in a sec. The costume designer for this Doctor Who serial was Rosalind Ebbutt, who has worked her way through quite a few of the Beeb’s TV shows, period and otherwise. She also did the costumes for The Buccaneers (1995), The Tenant of Wildfell Hall (1996), Emma (2009), six episodes of Downton Abbey (2011), and currently Victoria (2016-). 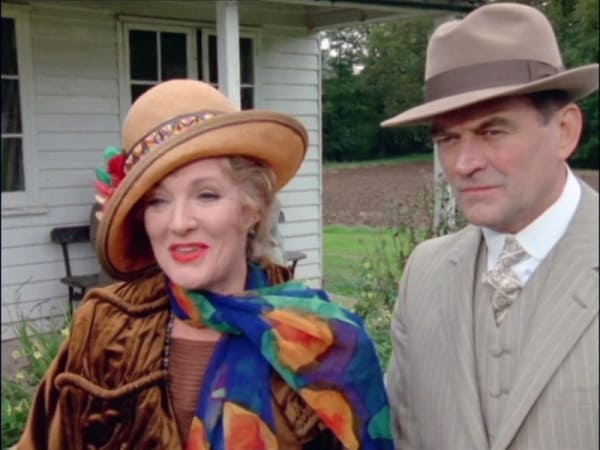 At the cricket match, Lady & Lord Cranleigh are quite posh. She has a great hat, a lush brown velvet coat, & flashy scarf & hat trim. 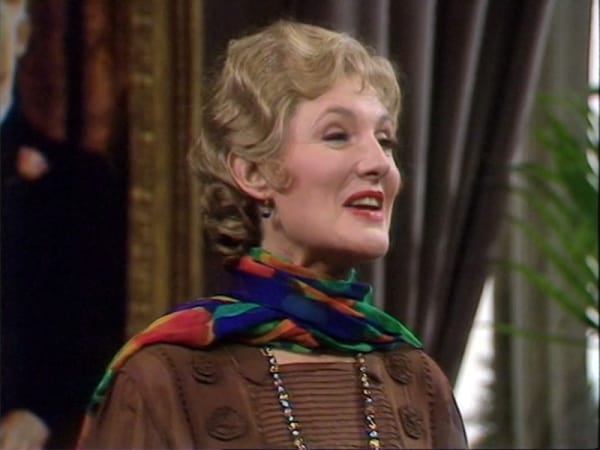 Back at the estate, we see Lady Cranleigh has perfectly waved hair underneath her hat, & she’s wearing a brown dress with self-trim. 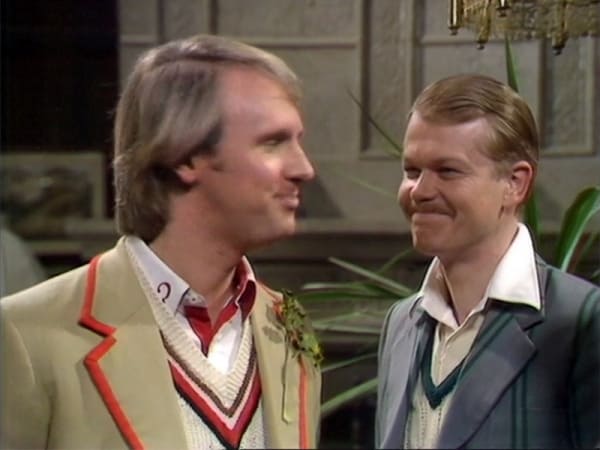 Speaking of hair, young Lord Cranleigh has 1920s-style trimmed & slicked-down hair, while the Doctor’s hair is longer & floppy. It’s a little touch that some modern (& non-BBC) shows don’t do for early 20th-c. dramas. 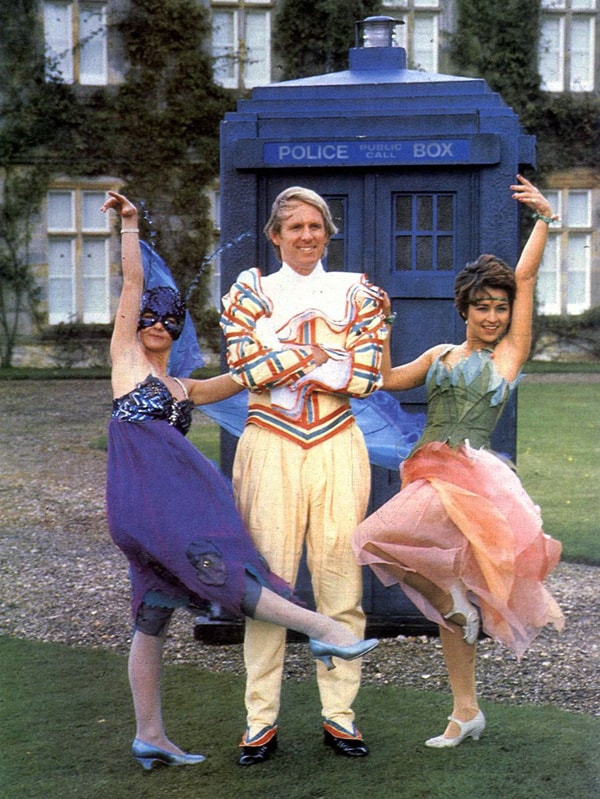 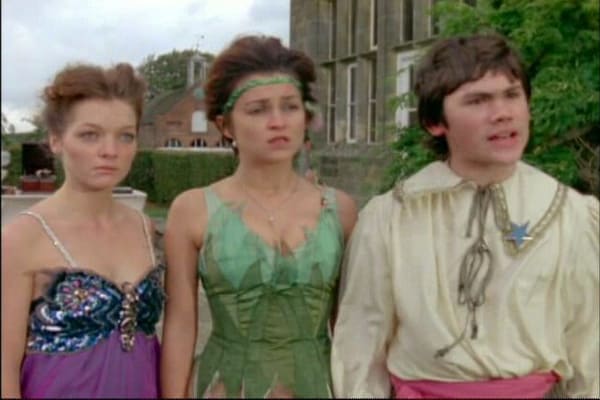 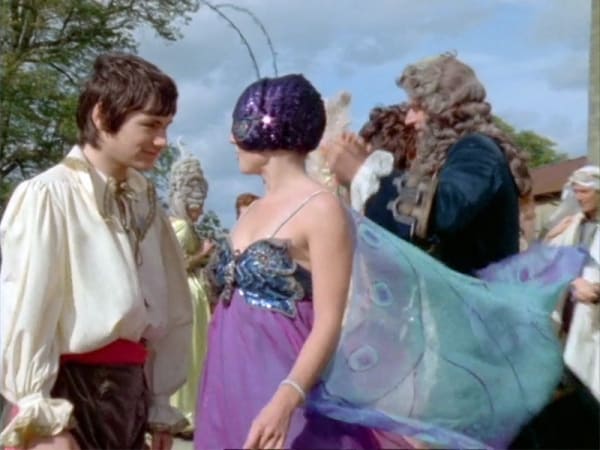 This dress does look pretty when the wind kicks up. 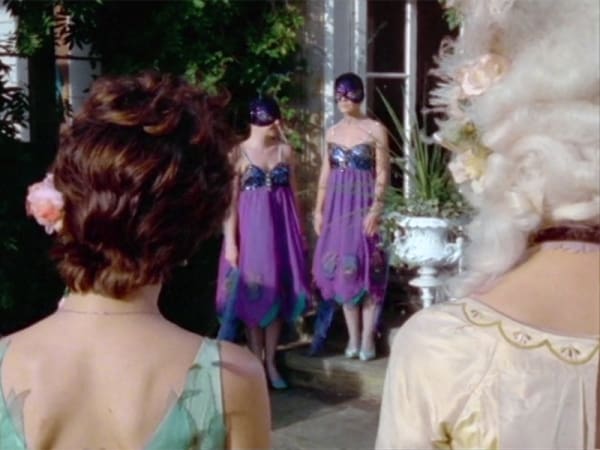 Ann had the idea that she & Nyssa wear the same costume, of course. 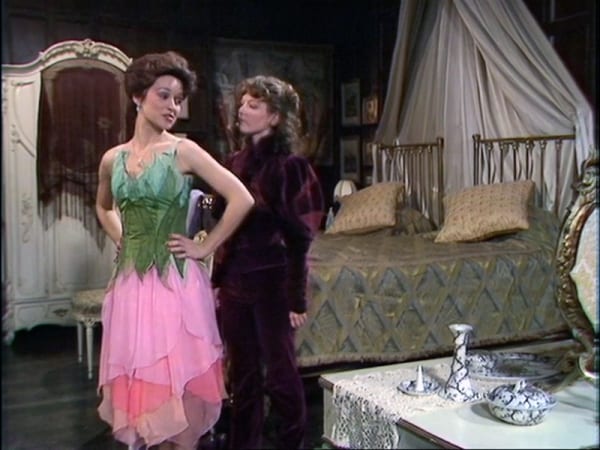 The fitted shape of these dresses just don’t say “1920s masquerade” to me. 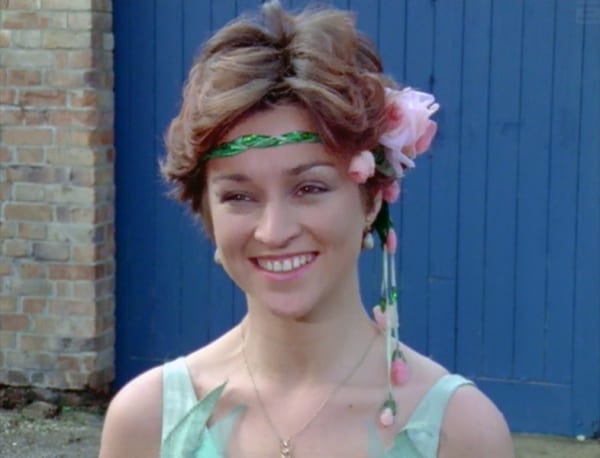 At least the excuse for Tegan’s hair is that she IS from the 1980s.

The one costume especially worth pointing out is the fancy-dress outfit Lady Cranleigh wears. It’s a lovely yellow 18th-century gown that was later used on an extra in Annie Lennox’s “Walking on Broken Glass” music video in 1992 and again in the rebooted Doctor Who in 2006, “The Girl in the Fireplace,” worn by Sophia Myles as Madame du Pompadour. 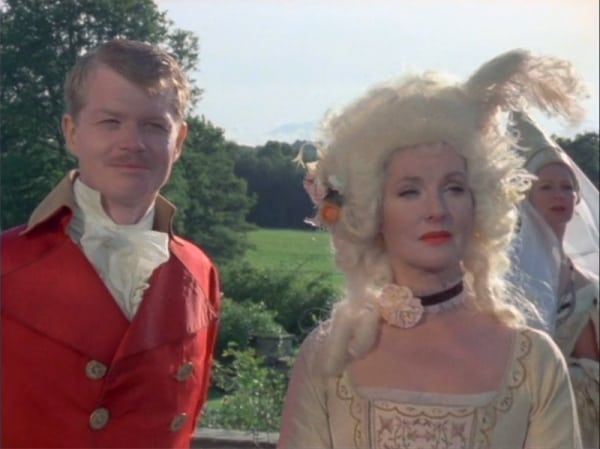 Can just barely see that the stomacher has hooks & eyes on the side, which is a vast improvement over sewn-in stomachers or the dreaded back-lacing. 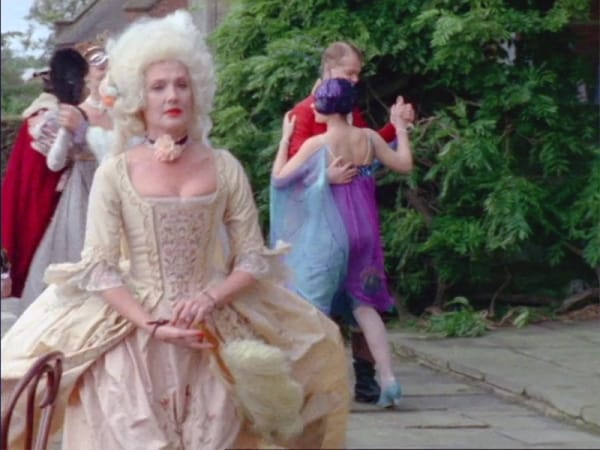 She’s carrying a folding feather fan, which is a cute nod to the 1920s. 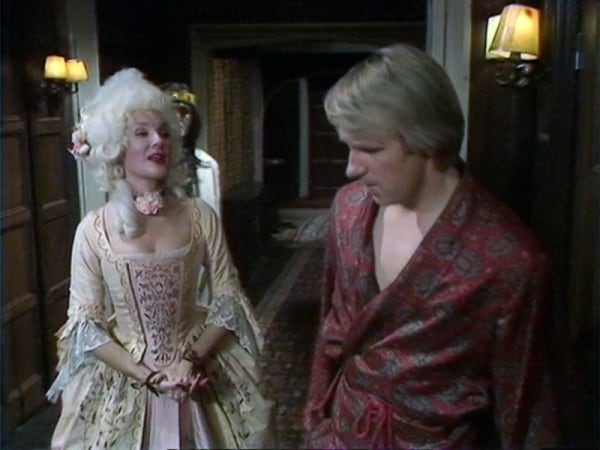 Lots of nice embroidery on this yellow gown. Oh & the Doctor tromps around in a dressing gown too. 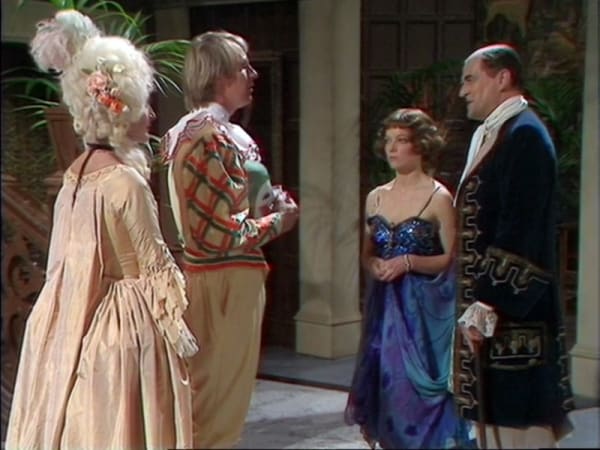 Hard to tell in the poor quality of the Amazon / BritBox stream, but I think the fabric of this 18th-c. gown as a pink/peach undertone. Whatever, it’s pretty! 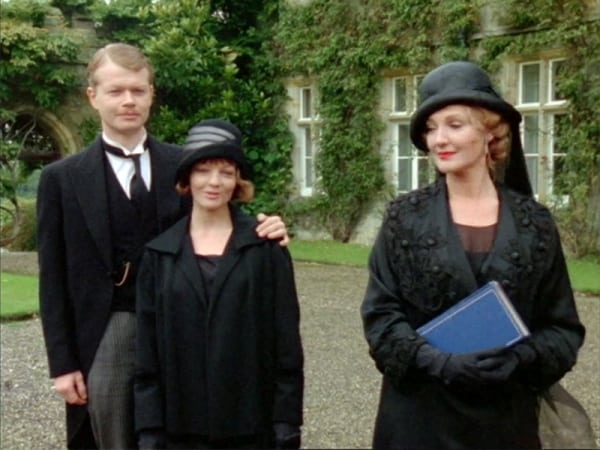 Are you a fan of Doctor Who historicals? Do you remember Black Orchid?