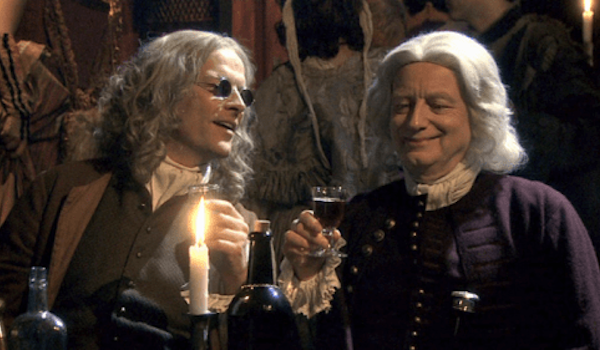 I’m kind of in the minority here at Frock Flicks, because I actually like historical mystery shows and will watch them just for the hell of it, not even for costume content. Which is fortunate, because the costume content usually sucks in these shows.

So, now that I have access to BritBox on Amazon Video, I’m finding all of these shows that never made it across the pond to American audiences, and if there’s one thing that Brits seem to really enjoy, it’s murder-mystery shows and historical miniseries. And occasionally, someone gets the brilliant idea to combine the two and we end up with awesome shows like Cadfael.

In fact, it was because I had been re-watching Cadfael recently that Amazon suggested City of Vice (2008) as something I might enjoy. The premise intrigued me: Henry Fielding (celebrated author of Tom Jones) sets aside his writing to put together a crack team of investigators known as the Bow Street Runners, whose mission is to solve crimes and bring bad guys to justice. And it’s set in the 1750s, so maybe there will be some interesting costume content aside from the standard “rag people” that invariably represent pre-20th-century Londoners.

The series only lasted one season, and I’m halfway through the second episode as I write this and I have to say, I’m conflicted. City of Vice lacks the finesse of, say, Cadfael, but that could also be because it also lacks Derek Jacobi. Every film would be improved by 500% just by adding Derek Jacobi to it.

And while I know that in real life, John Fielding, Henry’s blind brother, was able to distinguish thousands of people from scent alone, the show’s version of John (played by the non-blind Iain Glen) is just a little too precious for me. Also, the moralizing, while accurate for the period, hits me as somehow “off” — I’m still trying to work through why that is, though. Anyway, we’re here to talk about the costumes, right? Right. So, costume-wise… Well… It’s a lot of middle-class and working-class menswear. And since the premise of the show is the Fieldings’ work around the demi-monde of 18th-century London, the womenswear so far is either whores or cross-dressers. Actress Holly Bailey as “Dying Jane.” Pretty much sums up the bulk of the women’s costuming in the show. Via StarNow. “Mollies” from the second episode. Via Angie Mudge’s Makeup Portfolio.

Ultimately, this is one of those historical shows where the emphasis is definitely on making historical London look like an absolute cesspool, which translates into everyone looking like Mr. Susan from The Mighty Boosh episode “Monkey Hell.”

Ok, I fully admit that this is probably way too obscure a reference for most of you, but you get the basic gist. Rag people. Everyone of them.

Plenty of mud, all it’s missing is some pigs. So unless you’re super-committed to the mystery element, you might give this one a pass.

Opinions otherwise on City of Vice?