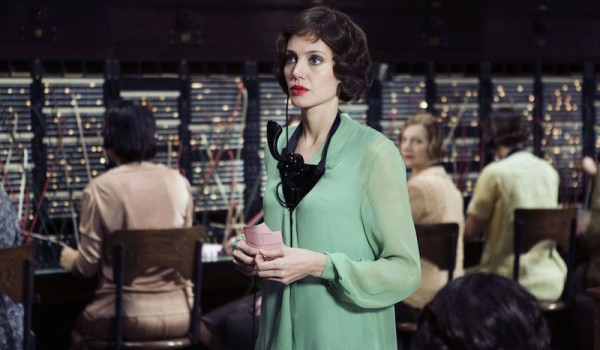 I vaguely heard about The Changeling (2008) when it was originally released — 1920s, a mother’s son is kidnapped, the police “return” him but the mother is convinced he’s not her son — and while I was vaguely interested, the whole idea didn’t grab. Well, I was recently in the mood for something dark, and the stills I’d seen of Angelina Jolie in costume looked good, so I decided to fire it up. I was quite pleasantly surprised!

First of all, it’s based on a true story, which always leads to fun Wikipedia-ing after the film. And, the story isn’t just about a switched kid and the mother’s reaction. I don’t want to spoil things, but it gets into police corruption and a morbidly interesting real-life serial killer that will have you Google-ing at 2am to learn more.

Despite being mostly praised for her beauty, Angelina Jolie can act, and I found her really convincing and touching as the mother in question. She certainly does the Mama Bear well! She’s so beautiful, but she really can act!

The costumes were designed by Deborah Hopper (Flags of our Fathers, Letters from Iwo Jima, J. Edgar, Jersey Boys), and it’s a two-edged sword — they’re BEAUTIFUL, which means it’s a fun film to watch, but they’re TOO beautiful for Jolie’s role, which detracts from the story. If you can just accept that Jolie is so randomly glam, you’ll do fine, it just felt like the visuals don’t match the story.

The issue is mostly that Jolie doesn’t look like your average, everyday 1920s working mother. To wit: At work for the phone company… Compare to the real Christine Collins. Ok, so the outfits are on point, I guess it’s just that the real Collins wasn’t Stunningly Beautiful?

That being said, it’s not that she’s dressed like a cabaret performer — the outfits read as authentic to the period. According to Variety, designer Hopper used lots of real vintage and it shows:

“Hopper, who also costumed Eastwood’s ‘Flags of Our Fathers,’ had to be equally inventive to clothe the nearly thousand cast members of ‘Changeling.’ Scouring vintage clothing houses from L.A. to Canada, she found cloche hats, roller skates and fur-trimmed coats for Jolie’s character, snappy dark wool suits for the detectives, dropped-waist dresses for the women, and jumpers, knickers and long socks for the boys.” (Craft spotlights)

The color scheme is nicely done, and according to Hopper:

“To achieve that feminine, very maternal, strong working woman, I used soft peaches for the feminine side, and I used deeper greens and richer brown fabrics (to emphasize) her stronger side.” (Changeling — Dress Jolie without sacrificing historical accuracy) This green dress is probably the standout number. Check out that embroidered hem! I think it’s the lipstick — if they’d toned that down, it all would have worked better. And the rest of the cast looks very convincing!

What do you think, should I cut The Changeling some slack on glammy Angelina Jolie?