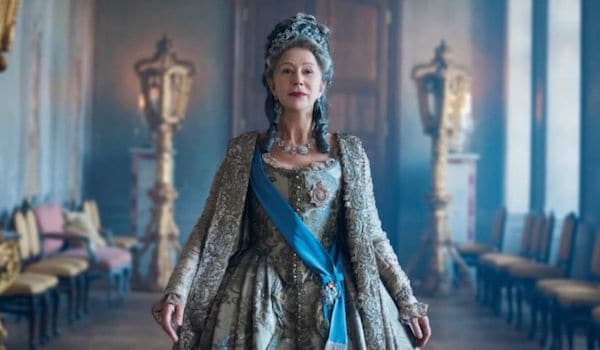 I think it’s fair to say that many of us have been waiting for the HBO/Sky miniseries Catherine the Great (2019), starring Helen Mirren as the titular Russian empress. It’s been hyped on various media websites for at least a year now, but other than the announcement of the leads and a couple of tightly composed promo shots, not much else was known until a few weeks ago in advance of its release, and that always makes me slightly nervous … as if the production company isn’t sure enough of the end product to give potential audiences more to go on than a couple of stills and some rather vague interviews with the principle cast.

So, when HBO finally dropped the first episode of four last week, I went into it a bit trepidatiously. I was reasonably certain that no matter what, the fact that Helen Mirren would, of course, be fabulous, but that’s like accepting the fact that water is wet. She is always fabulous, no matter the material. And the fact that she’s listed as the producer of the series, well, I suppose she’s got a more vested interest in the series not sucking than other roles she’s done in recent memory. 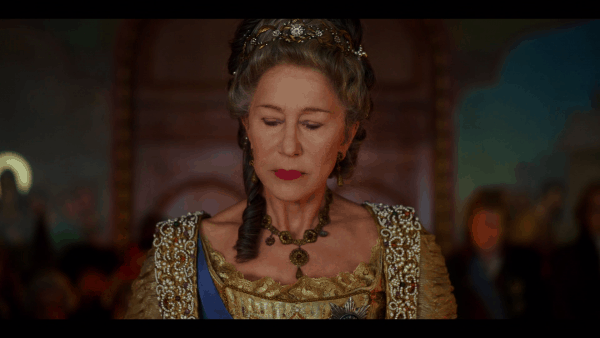 I will put the caveat out right now that I don’t know a whole lot about Russian history, but then again, I probably know more than the general target audience of this show. So, when the opening sequence began, I was already in a bit of a quandary. The script garbles a lot of the first 20 years of Catherine‘s life in Russia, which it kind of spits out in weird fits of exposition between scheming courtiers, so that by the time I could get a reasonable handle on the timeline, I was already confused.

Near as I can tell, the story begins in 1769, based on the coming-of-age ceremony of Paul, Catherine’s son and heir, which provides an anchor point for the plot of the first episode. But major players in the coup that brought Catherine to the Russian throne are introduced as near strangers, mainly the “young” Lieutenant Potemkin, who is being played by the not-exactly-young 50-year-old Australian actor, Jason Clarke. And indeed, the historical Catherine would have been 40-years-old, and Paul was 16. In all cases, the actors are obviously significantly older than their historical counterparts, which I guess I understand from an aesthetics point of view … Helen Mirren is 76, almost twice the age that Catherine the Great would have been in 1769. Casting everyone else according to the actual ages of the historical figures would have made her look even older by comparison. I’ll be honest: the fact that everyone was significantly older than the script was telling us they were was rather distracting. 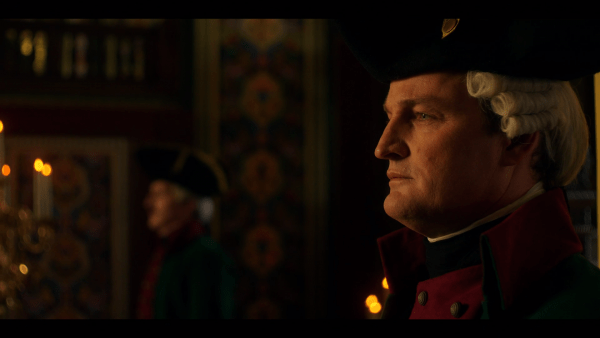 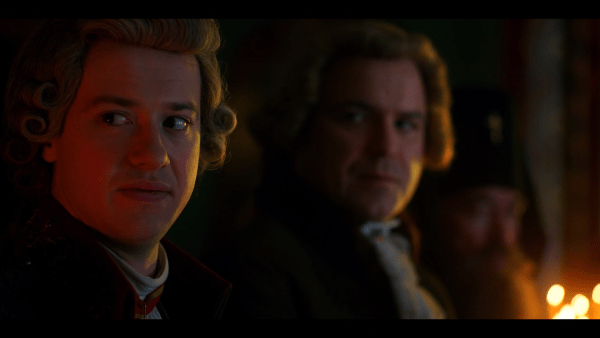 The worry lines on Paul’s forehead make him look like the world’s oldest 16-year-old. Then again, it couldn’t have been easy being Catherine’s only legitimate son…

And because I wasted so much of the first 10 or 15 minutes of the episode worrying about whether or not it was set in 1769 and how on earth Catherine had no idea who Grigory Potemkin was when he had been part of her inner circle since her successful coup against her husband seven years earlier, I will admit that I struggled with absorbing anything else of meaning from the plot. What I did grasp was that Catherine and her longtime partner Count Orlov were trapped in a loveless union, that Orlov was probably going to physically assault someone before the episode was over, and that Catherine’s BFF, Countess Bruce, was basically Catherine’s surrogate vagina through which men are tested before being passed up the food chain to Catherine. There was something about an imprisoned threat to the throne who gets gruesomely, yet expeditiously dispatched almost as quickly as the audience can piece together who he is (hint: Ivan VI, deposed as a baby and imprisoned for two decades), and we see that Catherine’s main adviser is attempting to both cling to his power with her while grooming her son for a probable overthrow of his mother’s regime at some point.

“Whatever, Sarah. What about the costumes?”

Well, glad you asked. There’s a lot of interesting tidbits about the costumes from Catherine the Great that have finally made it into the media in recent weeks. And in all honesty, the costumes are pretty decent. The costume designer, Maja Meschede (who worked as a costume assistant in The Duchess and Miss Pettigrew Lives for a Day), has given some nice interviews with outlets such as Jezebel, Forbes, and Slate. Interesting tidbits include the fact that Meschede acknowledges that not all the costumes are designed to be historically accurate from the skin-out:

“We make very comfortable corsets with elastic elements and Helen had a zipper in her corset and she could put it on fast. We use the lightest materials possible to help make them lighter because if you look at original boning with the corsets, that becomes even more heavy so we used a lot of tricks and safety pins instead of a cage. And whenever possible we got Helen out of the corset for a moment or out of the skirt just to help every day. But Helen was amazing. She never complained.” — Maja Meschede.

I really appreciated the fact that Meschede is upfront about the modernizing elements worked into the costumes, without the usual posturing about how historically accurate everything supposedly is or the eye-rolling about how uncomfortable period clothes are. Also, it was a nice detail to add about how Helen Mirren is a professional and wasn’t bitching about the clothing being too restrictive or whatever. Part of why I love her. Listen up, starlets, this is how you fucking do it.

One of the most noticeable details of Catherine’s court dresses in the series are the incorporation of the long ruched sleeves, ostensibly taken from Russian peasant costume. Over this is worn a sort of loose robe, which Meschede interpreted as kind of a sleeveless robe a la francaise. 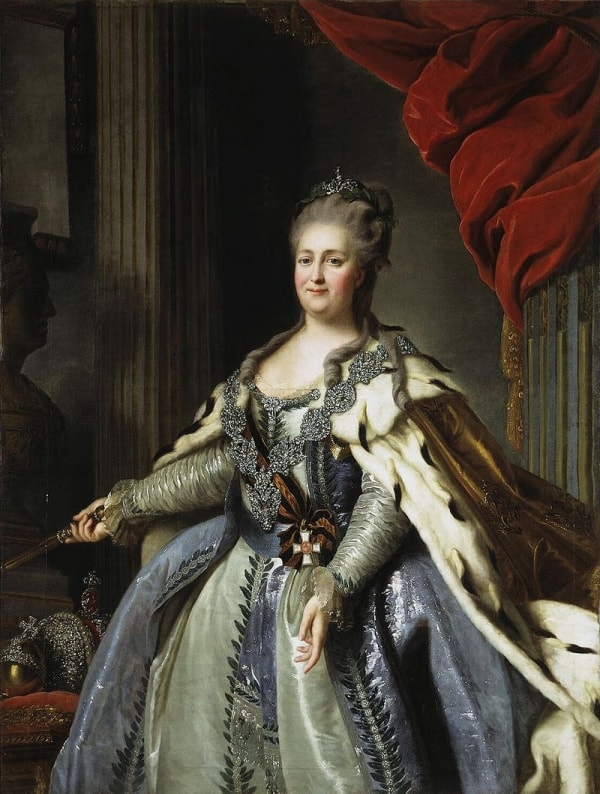 Catherine II of Russia, Portrait by Albert Albertrandi, circa 1770. 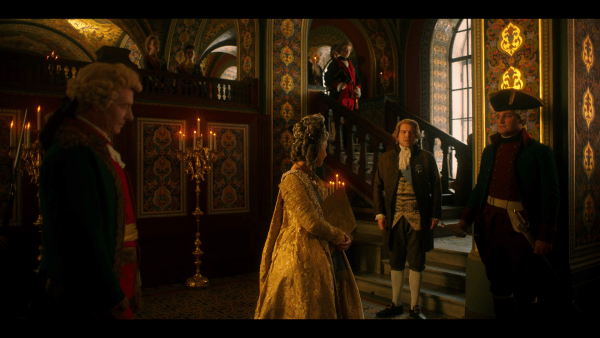 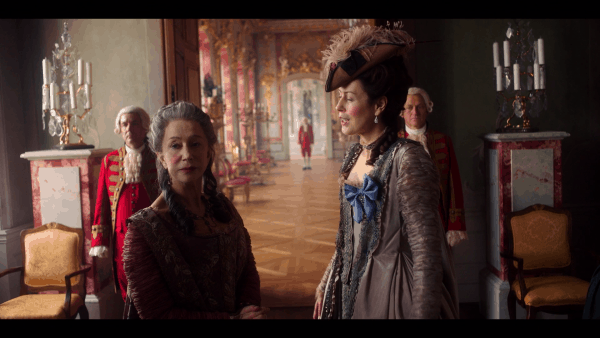 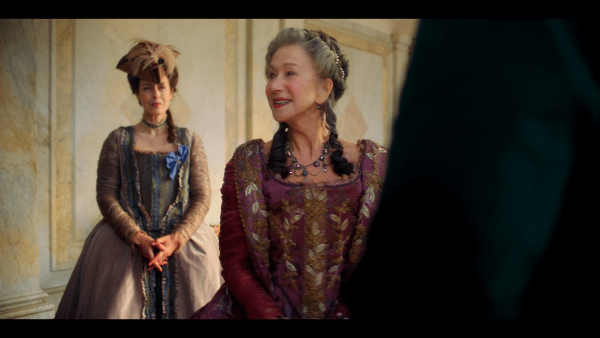 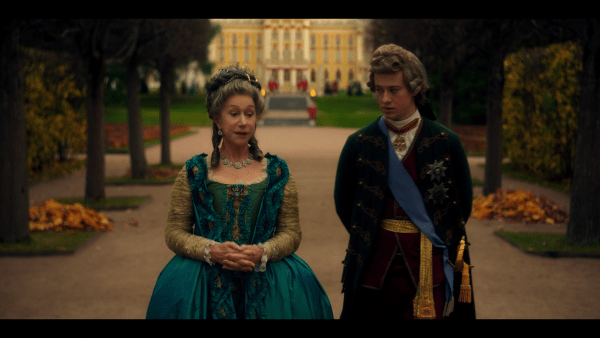 Clearly not skimping on the details (something I really do appreciate and wins a ton of points in my book), the show even throws little Easter eggs, such as Helen Mirren’s initials picked out in pearls on the back of her gold State Speech gown: 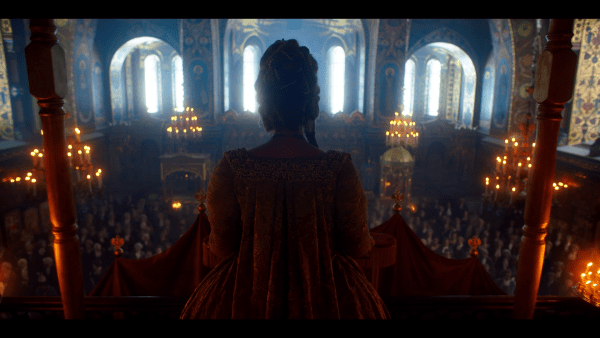 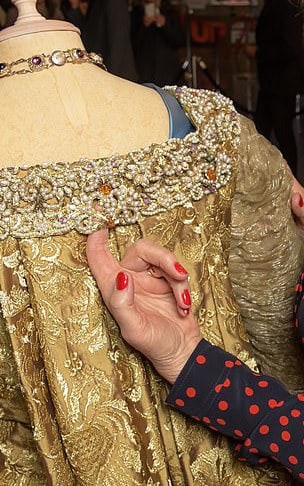 And the nod to Mantegna’s Dead Christ in the scene in which Catherine views the assassinated body of Ivan VI: 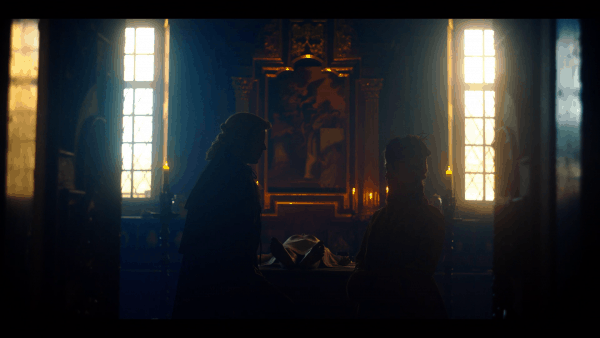 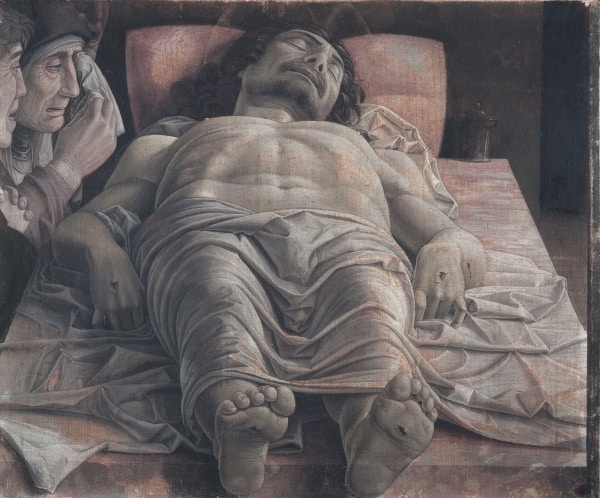 I also appreciated the details of Catherine’s informal clothing, which were varying flavors of Orient-inspired robes, banyans, and jackets. 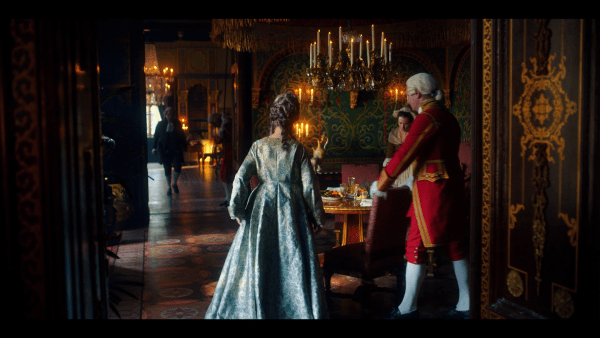 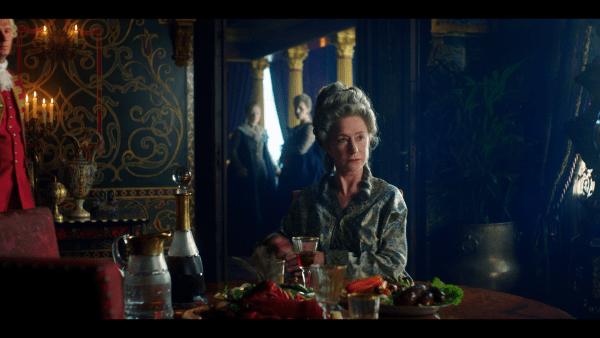 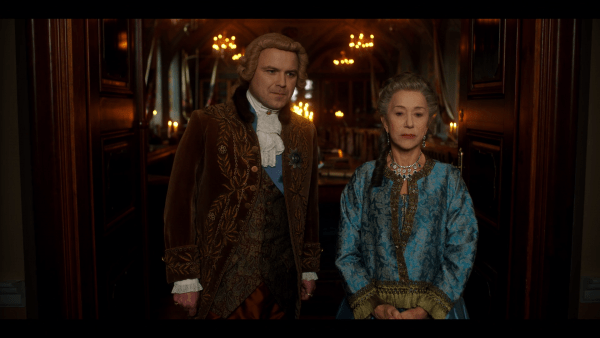 Meschede also mentions renting costumes from places such as Tirelli Costumi, which is probably where most of the male court costumes came from. I’d say this one is a likely candidate for being one of Tirelli’s inventory: 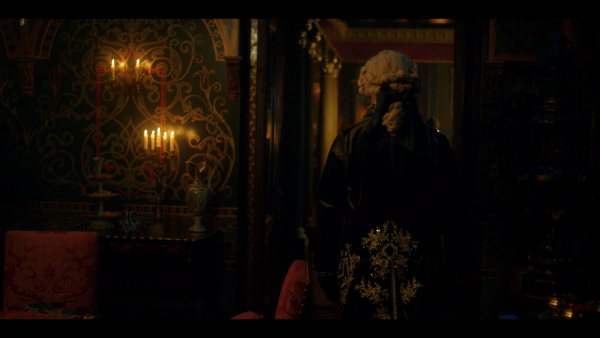 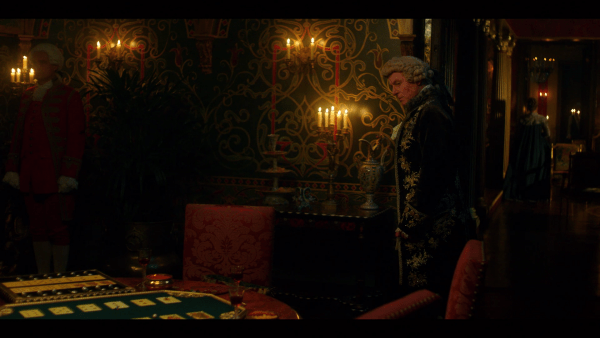 A fun detail at the end of the episode is the Transvestite Ball, a tradition started by Catherine’s predecessors, in which courtiers would cross-dress — men wore women’s clothes, and women wore men’s clothes. Catherine was apparently quite fond of these parties, and evidently everyone took them very seriously. 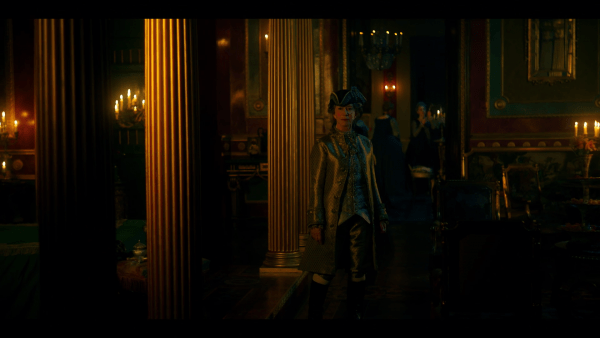 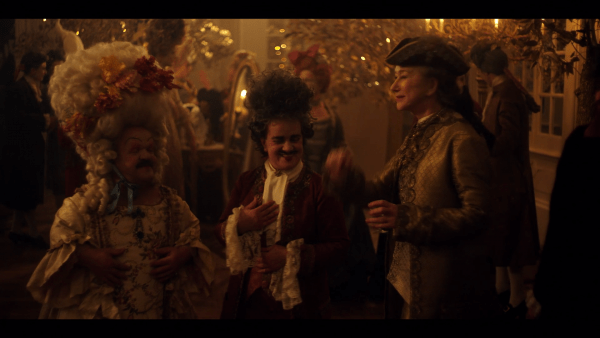 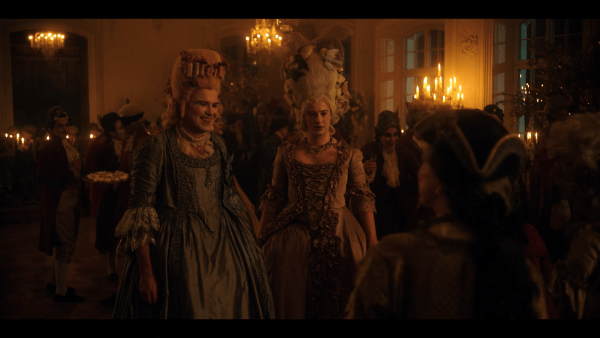 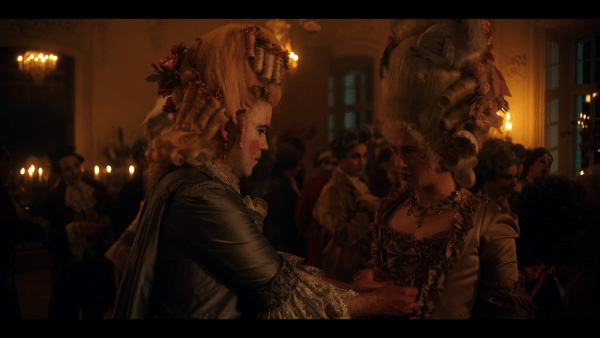 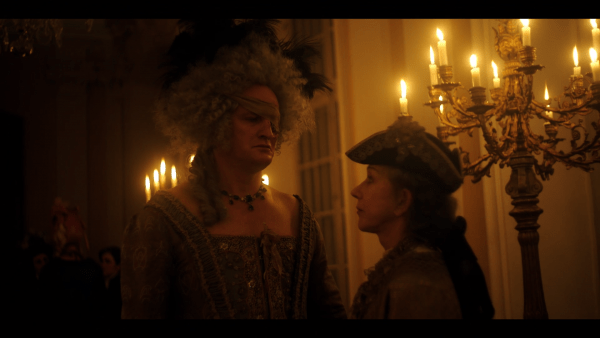 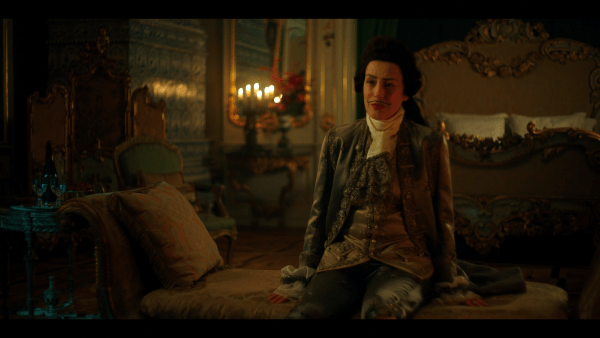 Overall, I am not so put off by the mishmash of history to continue to give the series the benefit of my doubt going into the second episode (which airs tonight on HBO). And the costumes, so far, are a solid B+. So, stay tuned for next week’s recap!

Are you watching the new Catherine the Great miniseries?