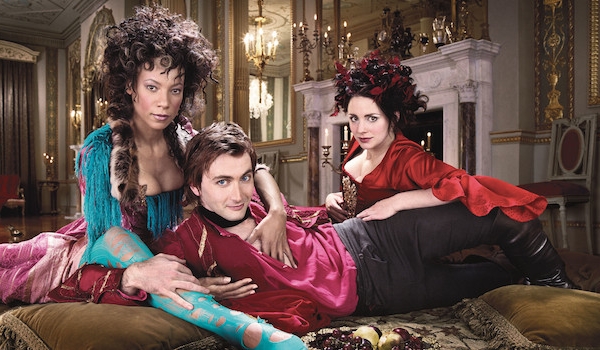 David Tennant stars as the famous lover Casanova in this BBC miniseries while Peter O’Toole plays his older self, Laura Fraser plays Casanova’s love interest Henriette, and Rose Byrne is the chambermaid to whom the O’Toole Casanova tells his life story.  Whew!  Although it’s a period film (set in 18th c. Venice, Paris, London and Naples), it’s very modernized, both in its script, shooting style, and particularly the costumes — which range from relatively period (altho they appear to have had a small budget — Henriette wears the same red gown for years) to completely not-based-in-reality goth-ified costumes (if you’re shocked when they arrive in Paris, just wait until they get to Naples!).