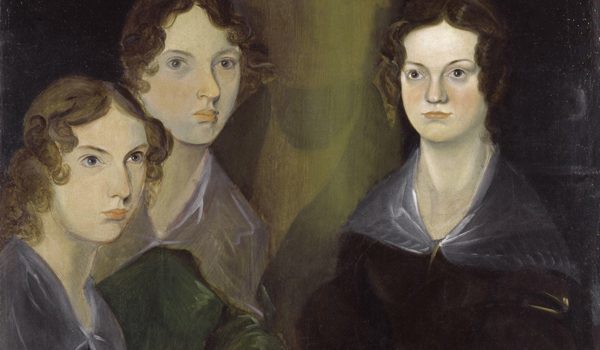 Are you ready to wander the moors with me and Charlotte, Emily, and Anne Brontë? Because it’s time for some serious gothic moping, bitches! Let’s get tragic and tubercular with my favorite authors and two filmed versions of their incredibly unexciting lives — as we await the American premiere of the latest Brontë biopic, To Walk Invisible, coming to PBS on March 26, 2017.

The life of the Brontë sisters has been made into movies before, even though the women really didn’t do much worth noting aside from writing their brilliant novels. Honestly, they sat around in a little house out in the middle of bumfuck nowhere England (yes, I’ve been there twice, it’s cute, but dull). They left for a few short stints to attend school and work as governesses. And then each one got tuberculosis and died. The end. Boring-ass story. OK, Charlotte went to London briefly and did marry her father’s terribly stuffy curate (that’s like an assistant pastor), and gasp she was pregnant when she died, so at least one of these chicks got laid. But no good came of it. This life story is not the stuff that high drama is made of. Photo I took at my last visit to the Brontë Parsonage in Haworth. Maybe growing up with a cemetery in your front yard makes you predisposed to gothic drama.

Of course, that’s the mystery. It drives people crazy to think that the women who created the high drama in Wuthering Heights, Jane Eyre, and The Tenant of Wildfell Hall had zero action in their own lives. It’s called IMAGINATION, folks! The Brontës had it, like whoa. They were well read and, in their isolation, they loved to make shit up. Their whole lives were filled with fan-fiction. Seriously, think about all the Kirk/Spock fan fiction created by women in the 1970s. With no personal experience of gay male life (and no internet for research), women created stacks of elaborate porn ‘zines, in story, verse, and pictorial forms. Don’t ask me how I know, just trust.

Anyway, back to the Brontës. I previously reviewed 1946’s Devotion, which was an awful attempt at stirring up some romance into the Brontës’ lives. Also, crappy crappy costumes, but I guess that goes without saying given the production date. I had slightly higher hopes for these two subjects, first a BBC five-part miniseries titled The Brontës of Haworth (1973) and then a French feature film Les Soeurs Brontë (1979). Let’s take them one at a time… Branwell painted this portrait of his sisters around 1834, and it remains about all we know of what they looked like. And this self-portrait doodle is all we know about Branwell. With all the time in the world, this feels like you’re at home with Charlotte, Emily, Anne, Branwell, papa Brontë, and auntie. I’m not sure if this is a good thing. Yes, the five hours are thorough and historically accurate. But dayum, I’m a literary completist, and I found myself bored at times. Yup, a whole lot of derpy bonnets. Don’t say I didn’t warn you.

The first three episodes are dominated by Branwell’s frankly pointless life, and I’m reminded that the best thing he ever did was to paint himself out of that portrait of his sisters. It’s like he finally realized what a loser he was in comparison to his brilliant sisters. Except his goddamned patriarchal father never did! Patrick Brontë Sr. spent all his time and money putting Branwell forth in hopes the boy would be a great painter or at least make a decent living somewhere. But nope, the boy was only skilled at warming a barstool in the local pub. Why the crazy hair on Branwell? Go look at that self-portrait. Now look at this. Shitty screencap, but check the side-eye Emily gives her dad. She can’t even.

If you’re going to spend this much time on the topic, then why not delve into some details that were reflected in the Brontë sisters’ novels. The only part of their childhood we see is playing with toy soldiers, which, yes, was an influence on their fantasy juvenilia writing. But even better would have been to show the school Charlotte attended for several years, which was probably the model for Lowood School in Jane Eyre. She had been at this unpleasant boarding school with her older two sisters, Maria and Elizabeth, who died at ages 11 and 10 when Charlotte was 9 (all the children were born within about a year of each other). This is all we see of the Brontës’ childhood — toy soldiers. Meh. There were also a number of teaching and governess positions that Charlotte and Anne took that are simply dropped. Even Emily tried teaching once and hated it terribly. But this is all glossed over fairly lightly in favor of dwelling on Branwell attempting to be a grand artist. I don’t get it — we know he sucked, and the girls triumphed, so why lionize him? I mean, other than male bias? REALLY? Charlotte sending the sisters’ writing to London publishers, that’s where the story should focus. Kendra has been teasing me for ages, saying I need to watch this movie for Snark Week. She’s just a hater and doesn’t recognize the true genius of the Bronte sisters. The biggest thing really wrong with this movie is that it’s French, because it’s just weird to have these iconically English writers speaking in French the whole time, especially when it’s filmed on location in north England. Recreation of the famous painting with Branwell in the center. This has the reverse problem of most shitty paintings in historical movies — it’s TOO good; Branwell was a crappy painter so the original was a lot more homely. As a 115-minute movie, it’s still a bit meandering, due to the subject matter, and there’s still too much focus on Branwell. The title is The Brontë SISTERS, “Soeurs” means “Sisters,” not “Brother and Sisters,” sheesh. This movie starts with the portrait Branwell paints of the sisters and him, and halfway through the film, he finally scrubs himself out of it. So there’s that. And while this film does show Anne’s time as a governess, her distress seems to be a mere backdrop for Branwell’s affair with the lady of the house. Yes, it happened, but again, I want more of the sisters, less of the bro story. Then there’s Emily (played by Isabelle Adjani, a few years before Queen Margot) as a cross-dressing tomboy, which is quite the fictionalization. Between that and Anne’s perpetually crimped hair, this version loses a few historical accuracy points. But for sheer gothic drama and hand-staple-foreheadness, this version delivers. We’ve got moor-wandering, tortured poetry, artsy cinematography, dark hallways, enigmatic clouds, and pretentious classical soundtrack. I would have loved it a lot more if I’d seen it as an angsty teen when it first came out. Anne has a crimping iron and is not afraid to use it. Charlotte & Emily’s schooling in Brussels is covered, if briefly. They argue about going to London to see their publishers (Emily bails on the trip). And after her sisters die, Charlotte goes to London as a celebrity (for 5 seconds).

OK, you’ve seen the competition, and the bar is set pretty low. Now let’s find out how the Brontë sisters look on TV in the latest version. Brits have already seen it, and Americans get it next weekend. Will you be tuning in?