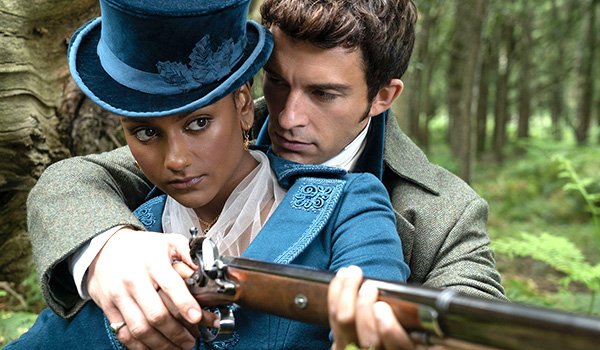 Frock Flicks note: This is a guest post by Deb Fuller. She’s a horse-crazy independent costume historian in the Washington, DC, area. She started riding at 9 and hasn’t stopped, nearly 40 years later.

This article contains mild spoilers for season 2 of Bridgerton, (2020-), but if you’re like most frock flickers, you’ll have watched it at least once by the time you read this article.

Kate Sharma is the educated, independent, outspoken lead of Bridgerton, season 2. Given her strong character, it is not surprising that she is the older, spinster sister of this season’s ingenue, Edwina. One common and extremely overused trope in period shows is that strong women must buck social conventions and insist on riding astride, not aside in sidesaddle.

If Bridgerton had been set in the early 1900s and Kate was a fierce suffragist, this would be accurate. One way that suffragists and other women’s rights advocates asserted themselves was by donning trousers and riding astride. You see that in Downton Abbey when Lady Mary bobs her hair in a fit of liberation and then starts riding astride in the hunt. But Bridgerton is set in the Regency when there were a lot of opinions about the proper way for ladies to ride.

Kate is introduced to the viewers by galloping past Anthony Bridgerton (on a Friesian, of course) in the early morning. When Anthony finally catches up, he’s surprised to see a woman riding astride. He asks if her maid knows she is riding astride and when she asserts herself as being an independent woman, he says that her secret is safe with him. 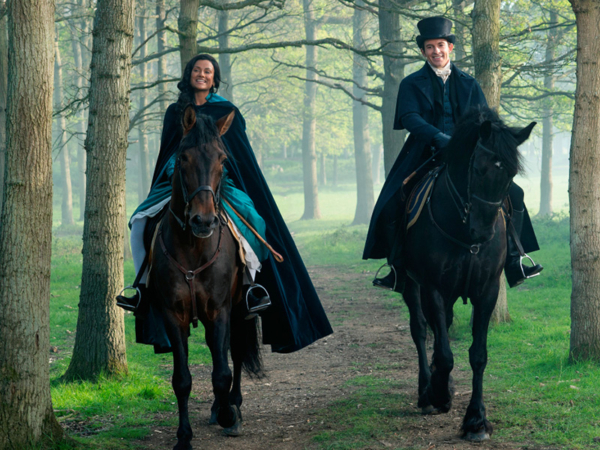 Anthony is being overly polite and is hinting at the fact that during this time period, riding astride was scandalous as people thought it would stretch a woman’s vagina. No joke. This is especially unthinkable for an unmarried lady, as if word got out, no one would want to marry someone with a blown-out hoo-ha. This cartoon from Punch magazine aptly illustrates this point and even makes a further dig at the young lady by the sailor’s remarks, who is implying she is of loose morals. 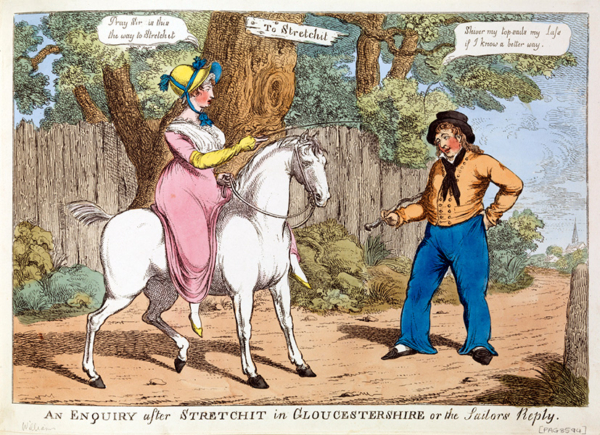 I can accept Kate riding astride as she grew up in India, outside of the social conventions and prying eyes of the Western world and the ton. I don’t know much about the history of Indian women and riding, but from what little I’ve read, women were avid riders and supposedly never rode sidesaddle. They also learned polo, which was invented in India as well. So riding astride in the wee hours of the morning fits Kate’s character and background. She knows it’s scandalous, but she wants to have a little bit of freedom before every move that she and her sister make is meticulously scrutinized.

What’s completely irritating is that she plopped on a horse in one of her silk dresses, complete with all the layers of petticoats. That is not only ridiculous but uncomfortable. No one rode in silk clothing apart from a cravat and a top hat. Silk is too delicate to withstand all the dirt, sweat, and horsehair. You’d also slide around too much in the saddle. I directed a horse camp ages ago, and one of my boys quickly regretted wearing Umbros with his chaps. Shorts and chaps are common in the summer — but not slick, polyester basketball shorts. Ouch!

Trousers with riding habits started to show up from the late 1700s and are still used today. As ladies got more adventurous with riding, they lost the petticoats and just used trousers under their skirts. You still saw women riding in regular dresses as well but trousers under riding habits were common by the Regency. Later in the 1800s, they became the standard and are necessary if you are wearing a safety apron. Given that Kate is from India, she would have been perfectly comfortable in trousers and it would have added more credibility to why she was riding astride. 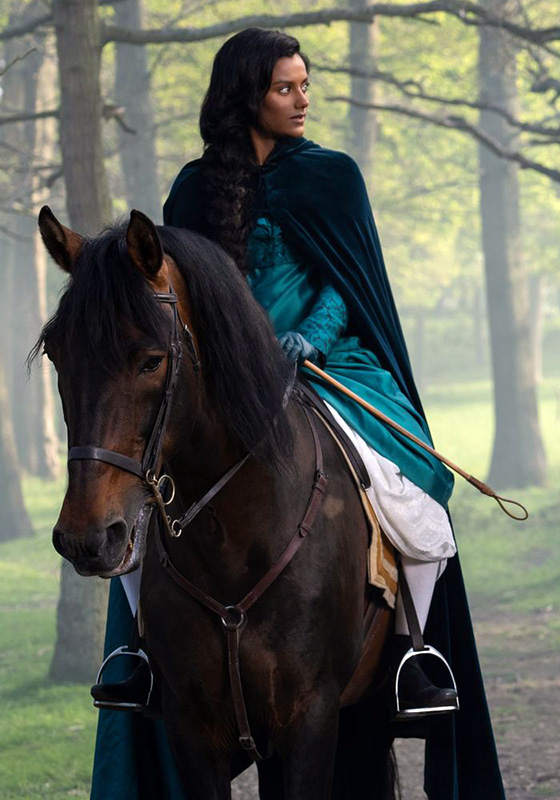 I smile through all the chafing from riding in silk. Oh and please ignore my scandalous petticoats and my ankle.

Later, Kate joins the men in a hunting expedition. She’s dressed in a lovely riding habit but again, is riding astride. This completely goes against her character. Previously, Kate insisted to Lady Danbury that she was perfectly capable of teaching her younger sister how to be a proper English lady. She is also her sister’s main chaperone for the season and makes sure her reputation is flawless. So why risk her sister’s reputation by riding astride among men, especially when she is already pushing convention by asserting herself as a competent hunter? 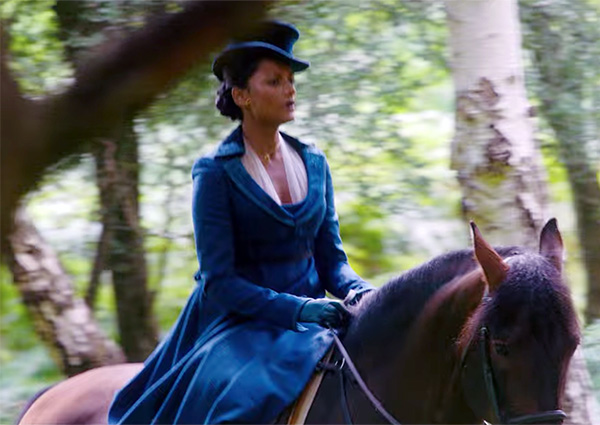 A hapless maid, who has been dragooned into chaperoning, is seen in the background awkwardly riding sidesaddle. This is a nice touch as maids wouldn’t know the first thing about riding, but no lady of society would want to be Kate’s wingman for such a manly pursuit. 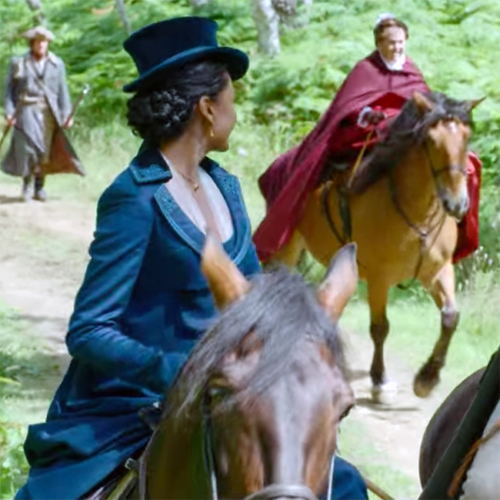 Bridgerton obviously makes a point of not using historically accurate costuming but still attempts to be accurate in most other areas such as manners, etiquette, and scandal. There is no need to use a tired trope of “rebellious woman riding astride during the time of sidesaddles.” Had Kate ridden sidesaddle for the hunt, that would have further established her character as being well-versed in all the nuances of English high society as well as shown how she is also an independent woman. Like corsets being uncomfortable, riding sidesaddle was neither difficult nor lesser than riding astride. In fact, women pushed the development of the sidesaddle so they could go riding with men and not be left behind. By the Regency, women had been riding alongside men in their sidesaddles for well over 200 years. The costumes were so much better this season. Now it’s time to clean up these tired old tropes.

OK then, what tropes bugged you about Bridgerton?