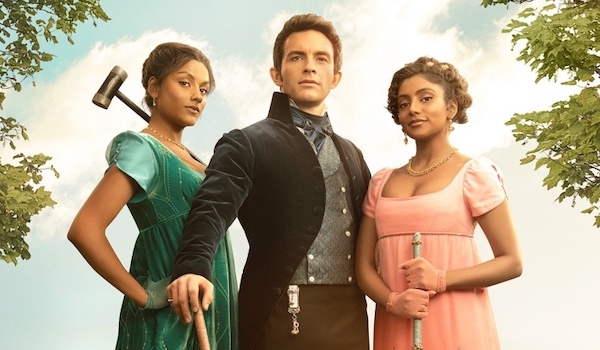 Hopefully we’ll do a more comprehensive, well-thought-out post about Bridgerton season 2 (2022) very soon. But knowing that you, like I, probably spent the weekend bingeing it (alright, I’ve made it through six episodes), I thought we’d better talk sooner than later! For those living under a rock, Bridgerton (2020-) is a Netflix series adapting the Julia Quinn romance novel series. The first series was set in 1813, and it’s about the Bridgerton family, a viscount-y family with a whole bunch of daughters and sons who are focused on the social season and marriage market. Season one’s costumes were designed by Ellen Mirojnick, and she created a sartorial world that was high on fantasy, color, and sparkle. Season two has a new designer — Sophie Canale — but obviously she needs to work in the same world.

First off, I’m not going to get into characters or plot, or how well the adaptation follows the book (or post any real spoilers). Our task here are costumes, with one very important exception: 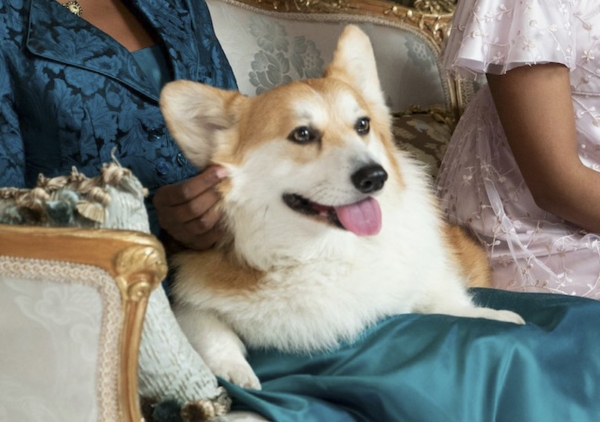 NEWTON IS CLEARLY THE BEST THING ABOUT SEASON TWO.

With that out of the way, let’s meander through some of the things I’ve been thinking about, costume-wise!

Finally, this show has found OUTERWEAR. Sure, with low necklines and often with short sleeves. But 1) outerwear is probably the best part of Regency fashion, and 2) I am no longer quite so worried about all these ladies freezing to death. England is frequently cold, people. 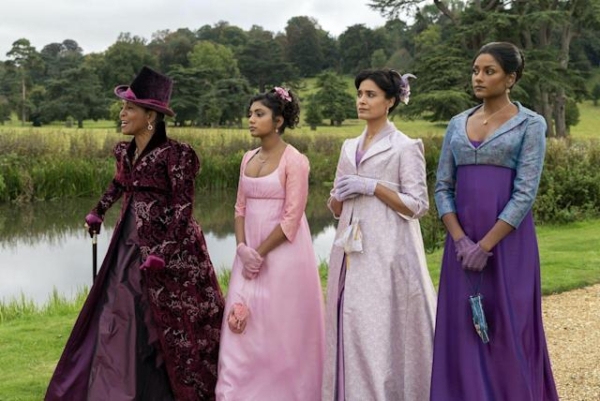 Lady Danbury has always been good for outerwear, but look! Pelisses and spencers! (Is that a shrug on Edwina? or is it a part of her dress?) 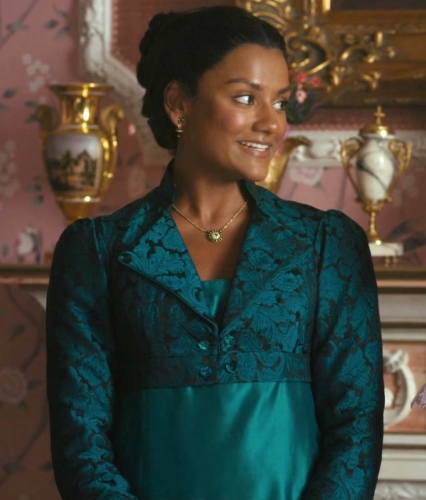 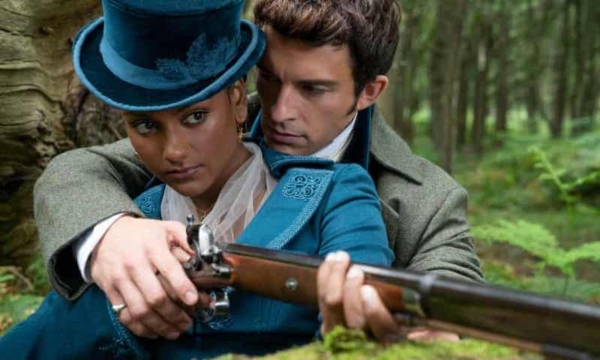 You can never go wrong with women’s hunting/riding gear.

And speaking of outwear, Lady Bridgerton’s pelisses continue to be my favorite style in the show: 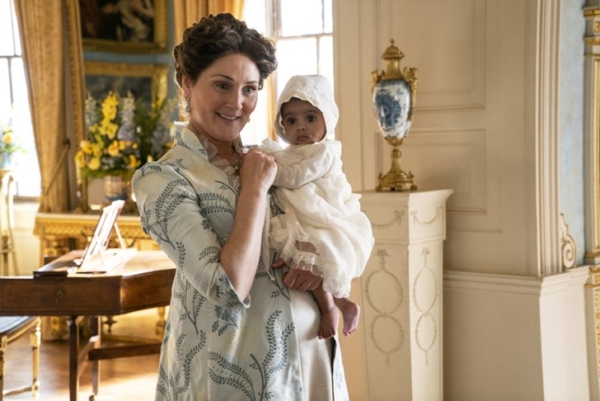 They’re so damn elegant, with 3/4 sleeves, a high neckline in back, and a sheer ruffle along the neckline. 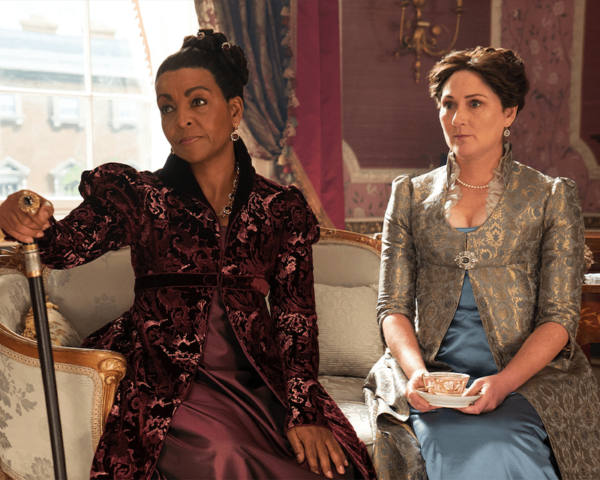 She still manages to show cleavage when needed! 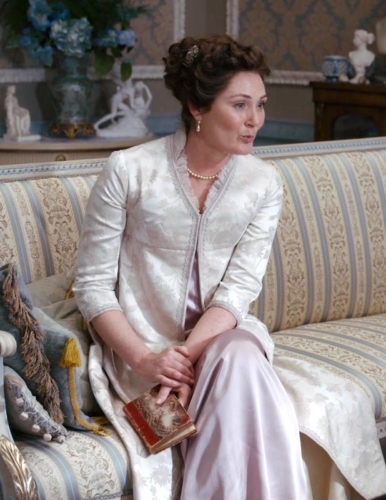 Why do so many of the dresses look so damn bridesmaid-y? Well, it doesn’t help that a lot of them have very modern style sheer lace and/or beaded overlays: 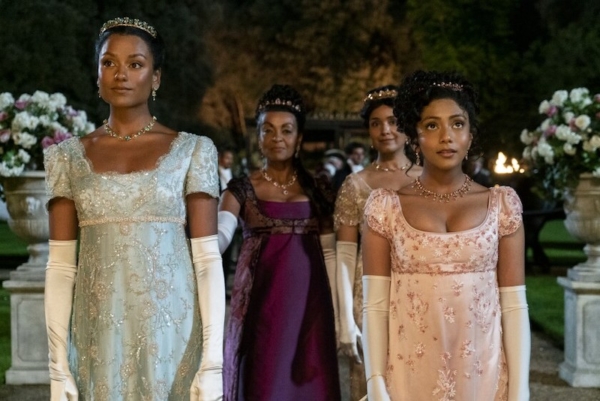 I hope these cost thousands of dollars, because I feel like I could find them on AliExpress… 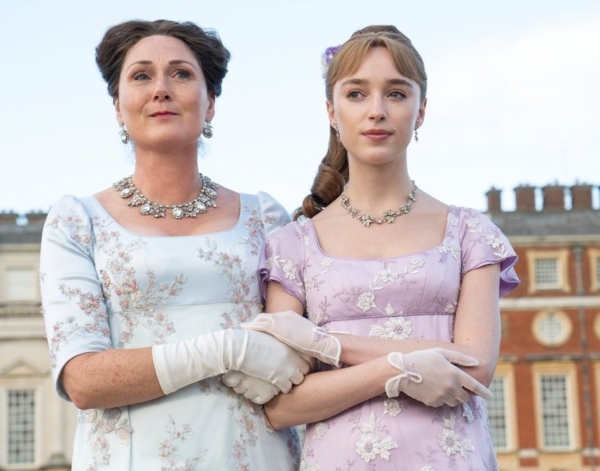 Lady Bridgerton’s overlay was one of the few I really liked. They placed the embroidery in continuous patterns, AND it was very delicate (unlike Daphne’s giant daisies).

It’s also because they wear these styles for day, which is just so not Regency: 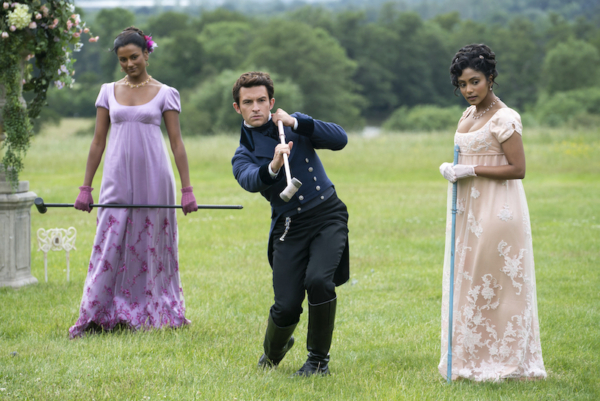 THESE ARE BALL GOWNS.

And unfortunately, many are made from satin. I think we all associate satin with polyester, although I’m convinced these are silk satins; and we associate poly satin with bridesmaids. 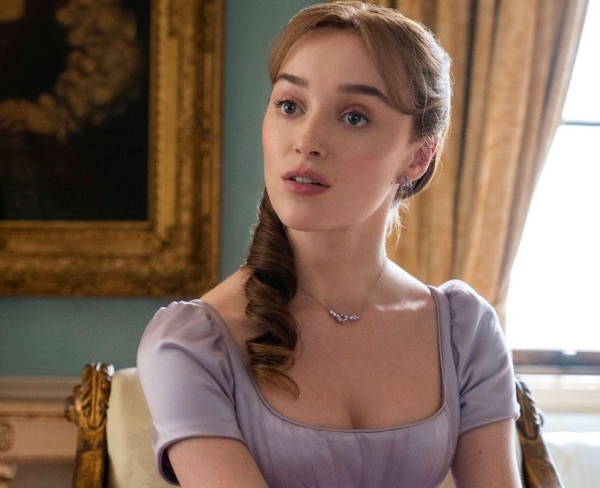 Kate’s isn’t bad, although the tulip sleeve seems weird for the period.

Side note, satin can be lovely, but there are certain things you shouldn’t do with it: 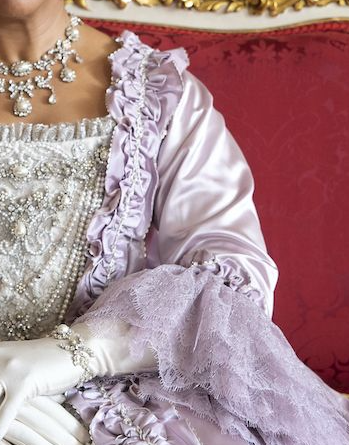 The dresses are so much more interested when there’s more going on: 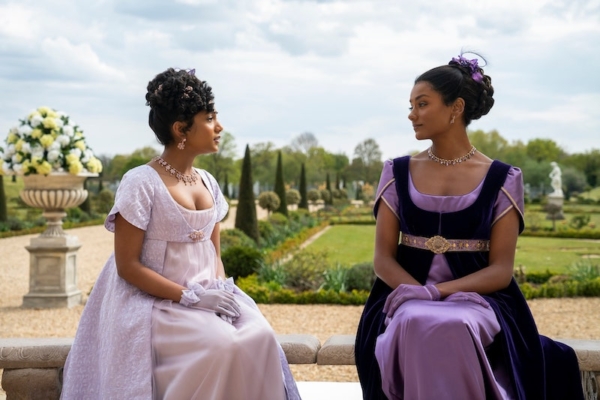 I can’t stop staring at how they’ve given Lady Featherington the “proper” back pleats in her gowns, but sewn them closed until the natural waist to give her a fitted silhouette that’s totally different from everyone else on the show: 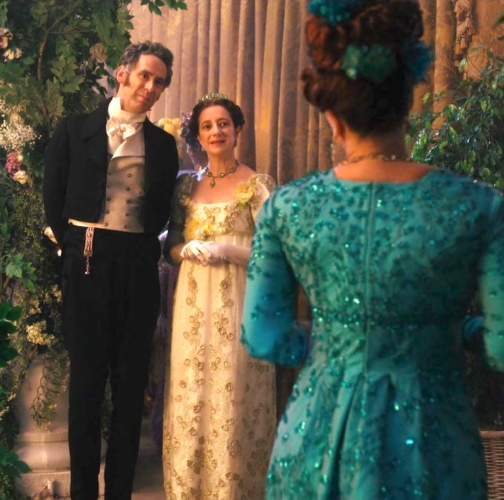 Did Polly Walker have a “waist” clause in her contract?

I continue to be personally offended by the hats: 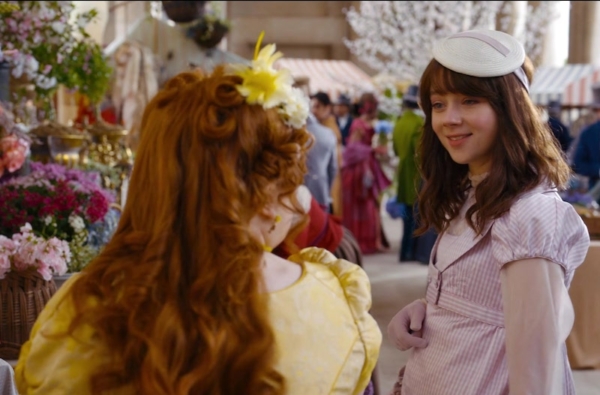 Pretty sure I screamed when that came on screen.

Now, let’s talk hair! Penelope’s dresses fit her better this time around (I think they’re trying to show age progression), but wearing her hair down makes her look younger, which then defeats the purpose: 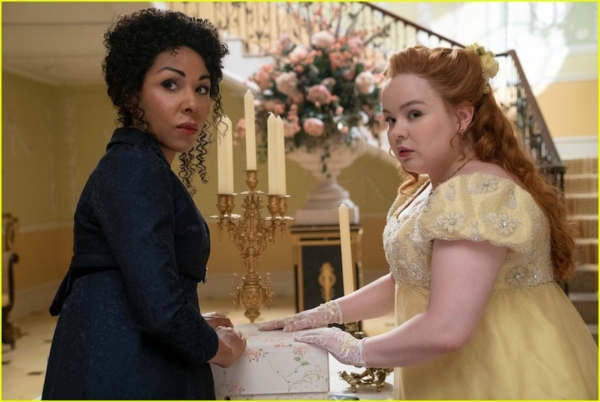 I’m glad it’s up in front, and I’m sure they don’t want us to see Penelope as a viable bride yet.

Hair designer Marc Elliot Pilcher sadly died right after winning an Emmy for season one. They’re definitely trying to stay in the same universe with the new designers. Sometimes that works: 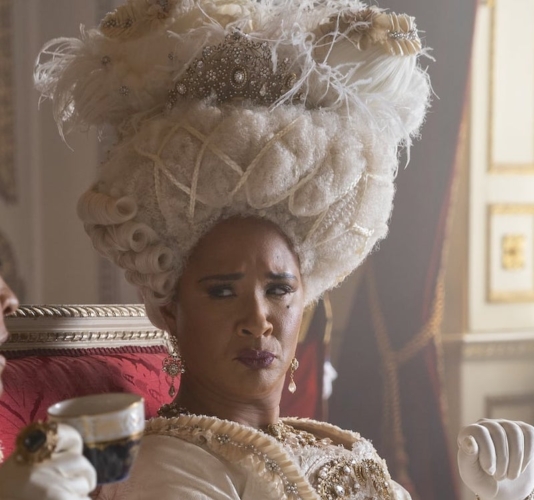 This one was my favorite, most especially the asymmetrical rolls, but all those feathers on top are great. 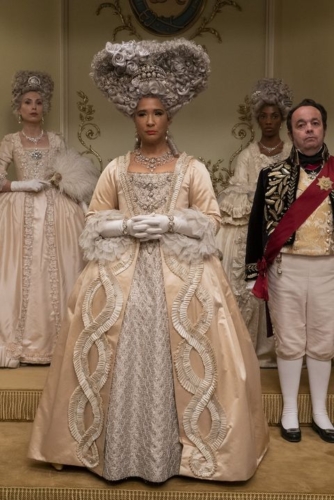 Semi-Minnie Mouse, but it worked.

And sometimes it falls flat: 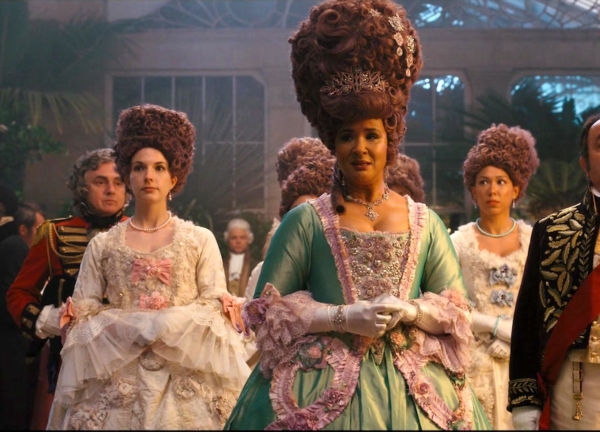 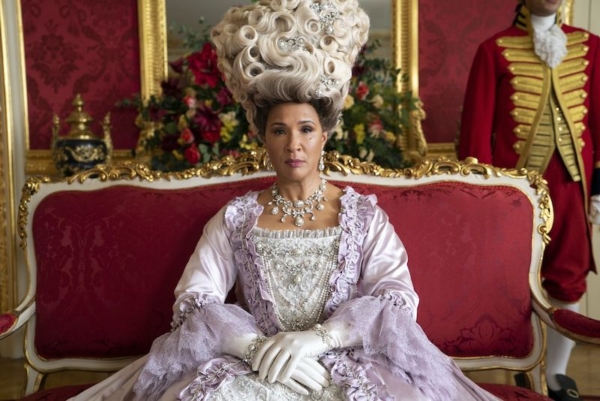 This one listed WAY too far forward, it was mesmerizing.

Although I hate her bangs, Eloise looks SO MUCH BETTER with her hair up: 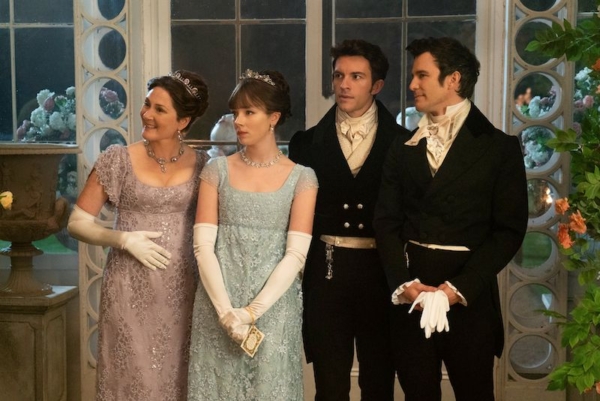 And while I realize she’s fighting like mad not to be “out,” she looks so terrible when its down: 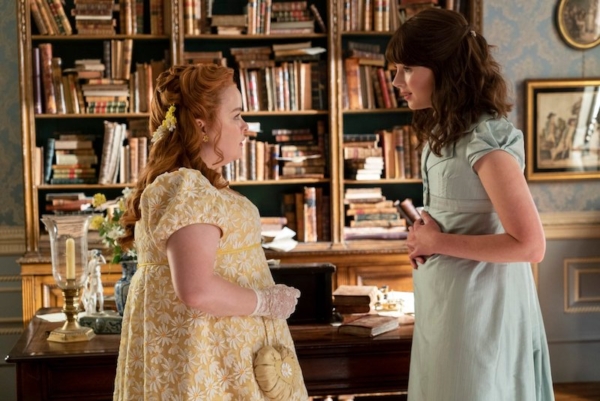 I can get that she’d try to get away with wanting to look younger as much as possible, but her mother let men call on her with her hair down? WTF?

Cressida Cowper has gone from baskets on her head to brioches: 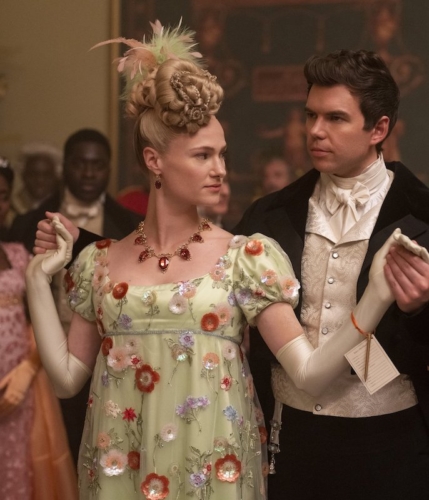 And Marina was desperately in need of some tendrils or something else to soften this look: 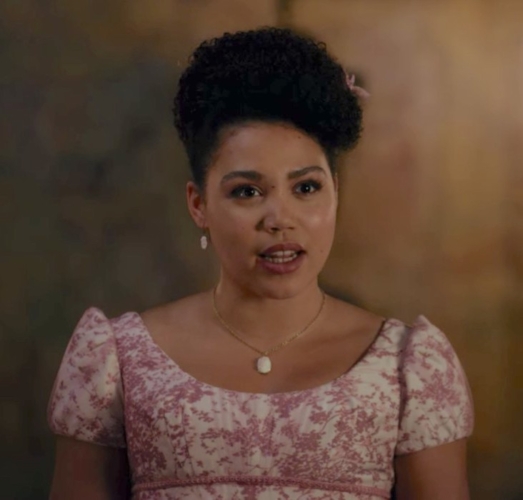 I think they were trying to make her look hausfrau-y?

What’s stood out for you, costume-wise, so far in season 2? Please, no spoilers, or at least add a spoiler alert!