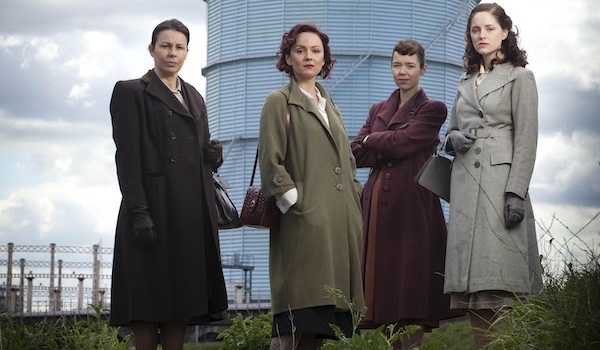 This ITV miniseries was really great, from the script/story to the acting to the costume design.  Anna Maxwell Martin (who you may know from Becoming Jane or Bleak House) is a stunningly talented actress — one of those you should pay to watch read the phone book.  She stars with three others (including Rachael Stirling from Tipping the Velvet) as four women who worked as codebreakers at Bletchley Park (the center of the British codebreaking effort) during World War II.  Now the war is past, and they are all trying (and frequently failing) to settle into a “normal” life — harder to do, because they aren’t allowed to talk about their war work.  Martin plays Susan, who is following a series of murders being publicized in the newspapers, and who recognizes a pattern that the police aren’t seeming to catch.  She gathers her former co-workers and they set about trying to solve the murders, once their attempts to notify authorities are disregarded. The story is a great mystery that will have you in suspense the whole time, and that’s layered with the interesting backstories of the war codebreaking, plus the difficulties the very different characters face as they try to navigate life, plus the general sexism of an era in which the idea of women being brilliant was laughable. The costumes are VERY well done, showing a nice range of early 1950s wear, with differences among the characters showing through their clothes.  No fall-over-yourself ballgowns or anything, but fabulous daily wear done RIGHT.