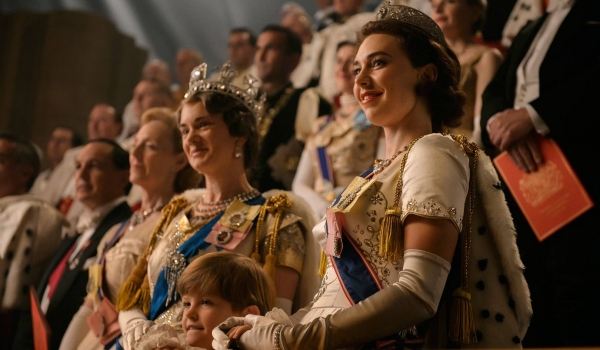 I admit, I tried watching The Crown when it first came out and it failed to grab me. Then Kendra admitted to giving up on it, so I was unprepared for the wild hair I recently got when I decided to binge-watch it (must have been all the promos coming out for season four with Princess Diana and Maggie Thatcher that got me to finally cave in). While the history might not be totally factual, the series doesn’t pull any punches, and between that and the truly amazing couture in the first two seasons, I found myself sucked in.

So, in honor of this random Tuesday, I decided to do a feature, in no particular order, of some of the iconic dresses worn by Princess Margaret in seasons 1 and 2 (season 3, of course, is where we have to end our coverage since our official cut-off date is 1969). Right off the bat we are made very aware that Princess Margaret is very much compensating for a stifling life as Elizabeth’s under-utilized understudy, and she’s doing it through high fashion. She’s all Dior ballgowns and Cartier diamonds. Costumers Michele Clapton (season one) and Jane Petrie (season two) do a fantastic job recreating the essence of 1950s haute couture, with all of its internal structure and outward effortlessness. Some gowns, however, sort of fell short of the mark. I am sure this is a direct reference to a gown worn by the real Princess Margaret, but it looked very out of place in the show. Perhaps that was the point, after all this is Margaret adrift in her own aimlessness. Margaret is always on the cutting edge of fashion. While her sister follows conventional styles, Margaret is making waves with silhouettes that Elizabeth could never pull off, such as this figure hugging evening gown. And this also extends to her non-formal wear, as well. This wiggle dress that she wears during her first one-on-one meeting with her future husband follows the same lines as the evening gown above. Jane Petrie and Vanessa Kirby beside the gown Petrie designed based on Princess Margaret’s wedding dress. While you can’t see it so well in the photo, the sheer organza overlay on the bodice has some particularly tricky finishing details that got a lot of praise from me.

What’s your favorite dress worn by Princess Margaret in The Crown? Share it with us in the comments!