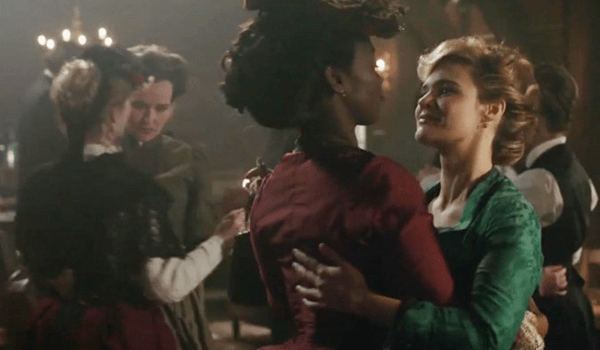 Happy Pride y’all! For thems not in the know, June is Lesbian, Gay, Bisexual, Transgender, and Queer Pride Month, with 2019 being the 50th annual celebration in the U.S. This dates back to the Stonewall Riots in 1969, when drag queens and transgender people lead a fight against a police raid of a gay bar in New York City. That kicked off the LGBTQ civil rights movement that has helped queer people gain a measure of freedom and security to be our authentic selves in public.

Obviously, our work isn’t done, and it’s still not safe for many LGBTQ people to be out where they live. The current U.S. administration is trying to push back legal gains (and the situation is even more dire in some countries), so we have to remain vigilant and vote for local, state, and national leaders and laws to help safeguard our rights.

One place that’s made amazing strides is film and TV representation. In historical media, LGBTQ characters were once completely ignored because the past was assumed to be heterosexual (and white, as we’ve mentioned in other posts). But actual research has turned up tons of evidence to the contrary, and filmmakers are starting to get the hint. The past year, in particular, has seen a range of frock flicks with queer storylines, including some high quality productions.

So here’s an attempt to catalog LGBTQ historical movies/TV series, plus ones with a major queer character and storyline. Not all of them are spectacularly good or happy for queer representation, but if you look through the production dates, you might get an idea of how far we’ve come!

I’ve listed them chronologically by historical setting, up to the 1960s or so, since that’s how we tag things here on the blog. Click any highlighted title for our review. Olivia aka The Pit of Loneliness (1951) — 19th-century, adapted from the novel by Dorothy Bussy What queer-themed frock flicks would you add to the list? Any historical shows with LGBTQ characters or storylines missing?