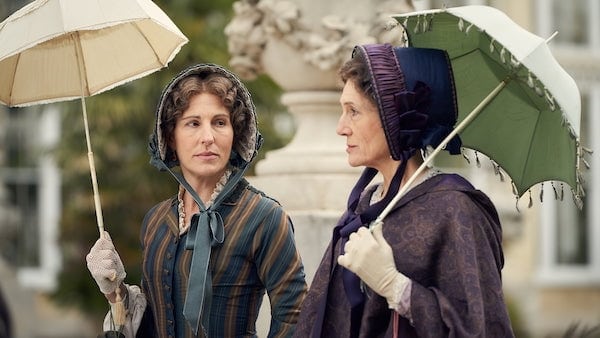 Belgravia (2020) is a new, six-episode series on the Epix channel from Downton Abbey creator Julian Fellowes, based on a novel Fellowes wrote himself. Set primarily in the 1840s, it’s about two families intermingling — one, longtime aristocracy, the other, new money, made in trade. But it’s about much more than that — there’s a key backstory that I don’t want to give away (okay, it’s obvious if you watch the trailers, but if you don’t, it’ll be more enjoyable) that’s pretty dark, and that connects these characters. Overall, I’ve been surprised to enjoy it as much as I have (only 3 episodes are out so far in the U.S.) — I think because I hadn’t watched any trailers and I was expecting more Downton Abbey-type soap opera, but the story is dark and real and well written/acted … and costumed!

The series stars a number of great actors, including Tamsin Greig (who will forever be Fran from modern-set Black Books to me, but who also played Miss Bates in the 2009 version of Emma) and Harriet Walter (Sense and Sensibility, The Governess, Chéri, The Young Victoria, Suite Française, The Spanish Princess), both of whom are giving great performances. Other key actors include Alice Eve (Stage Beauty, Ordeal by Innocence), whose dark eyebrows don’t match her blonde hair (a pet peeve of mine — I’m not saying it never happens naturally, but it screams “MODERN BLEACH JOB” when I see it on screen); Tom Wilkinson (Sense and Sensibility, Oscar and Lucinda, The Governess, Shakespeare in Love, The Importance of Being Earnest, Girl With a Pearl Earring, Belle, The Happy Prince); Ella Purnell (Ordeal by Innocence), who reads as super modern casual to me; and Tara Fitzgerald (Sirens, The Tenant of Wildfell Hall, Frenchman’s Creek, Jane Eyre, The Virgin Queen, I Capture the Castle, Exodus: Gods and Kings, The King).

The costumes were designed by James Keast (The House of Eliott, Aristocrats, The Ruby in the Smoke, The Shadow in the North, Desperate Romantics, Titanic, Mr. Selfridge, The Scandalous Lady W, Victoria). He’s VERY good at understanding character, working with small budgets, and — importantly for us! — keeping things historically accurate. He told The Telegraph that he made most of the principals’ costumes for the principal characters, but the secondary and extras’ costumes were made by a “London costumier”; some of the extras’ costumes were retrimmed and reused up to 10 times.

Now, the only REAL problem I have with the costumes is a true-ism we have at Frock Flicks: the 1840s are the death of fashion. Okay, so that’s hyperbole, and there are other eras that are equally dumpy, and of course there are lovely aspects of 1840s fashion, but unfortunately for me, the 1840s is all derpy bonnets and crocheted gloves and sipping tea and looking very maternal and Handmaid’s Tale-y. You know I’m saying something when I find the flashback Regency scenes to be more exciting, costume-wise. 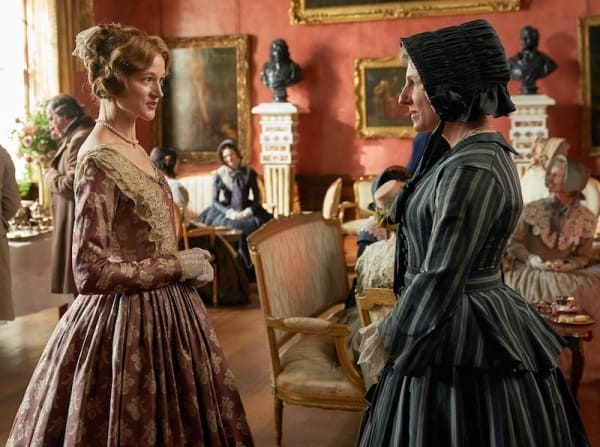 Keast tries, using a lot of lower V-necks (which ARE historically accurate to the 1840s-early 1850s, but less common than the high necks that look so extra dumpy), but there’s nothing like ladies wearing dumpy bonnets INSIDE (which, yes, they had the option to do) to make me want to get out my butter churn. 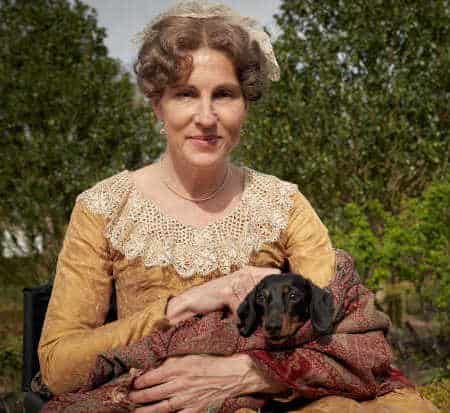 Potentially balanced out by the fact that Mrs. Trenchard has a PUPPY (character name Agnes, real name Emma). WHO’S A GOOD PUPPER! When her husband tells her to get the dog out of the bed, and Anne just rolls over and cuddles her, I was thinking “Solidarity, Anne!”

I will say that I did enjoy the novelty of watching women wear multiple petticoats as they did in the period, instead of the more usually seen 1850s-60s cage crinoline (although I am worried, given that The Telegraph quotes Keast as saying:

“I made a couple of petticoats from duvet covers, to try to create bulk without the weight. But they kind of collapsed in on themselves with the amount of fabric in the skirt. I ended up having to use more and more petticoats, which was a problem for the actresses because the weight of the petticoats was, to some of them, unbearable. It makes you walk a certain way, it makes you walk up steps, get into a carriage, a certain way, due to the weight. But the wealthier you were, the more petticoats you had. The actresses are eager to get to the late 1840s, when the crinoline has been invented.” (Uh, try 1850s, per the Victoria & Albert Museum! If there’s going to be a season 2, they’d better get that right!)

With my personal-taste caveat given, Keast’s focus was on demonstrating class differences, which are the core of this story. He told The Telegraph (whose article I’ll be quoting throughout this post), “You have all these people with lots of money who can all afford to dress very well, but the trick is to convey their class and background through what they’re wearing. I wanted a different attitude toward what they wore to suggest their characters.”

Anne Trenchard “was probably wealthier than a lot of people because of her husband’s business [as a property developer], so she wears very expensive clothes,” but The Telegraph says that Keast always gave her costumes a practical element. “If you were going to buy yourself a nice frock and it was going to cost £1,000 to £2,000, you’d think twice, and be aware that it would cost a fortune to clean. I gave her that mentality.” 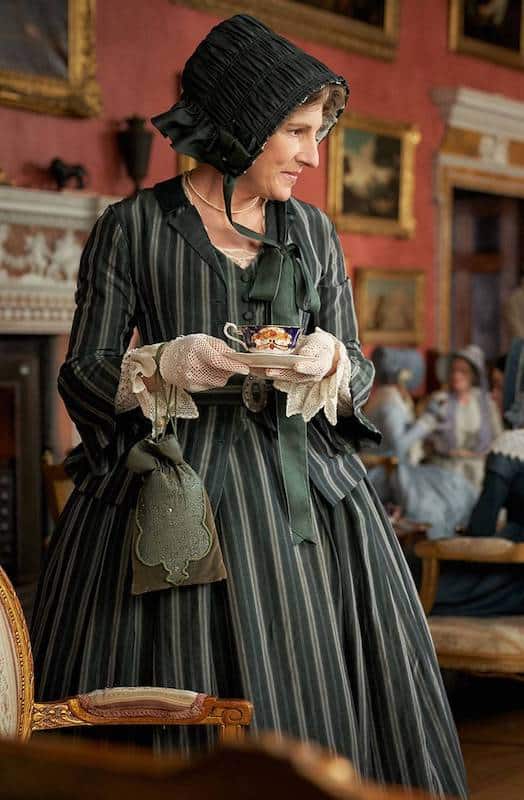 Mrs. Trenchard wears a lot of dull stripes, like this outfit, recycled from North and South (thank you Recycled Movie Costumes!). This is the same fabric Keast used in his falling-collar redingote from The Scandalous Lady W, and that a million other designers have used, by the way, and I’m getting sick of seeing it. 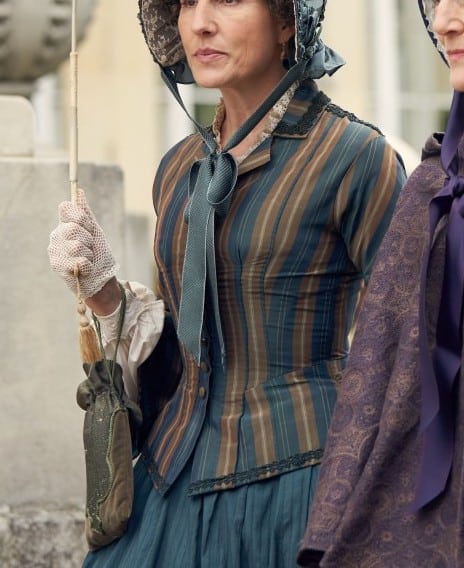 A different outfit, but a similar vein — I’m not loving the fit, but that kind of stress wrinkles are hard to avoid in this era. 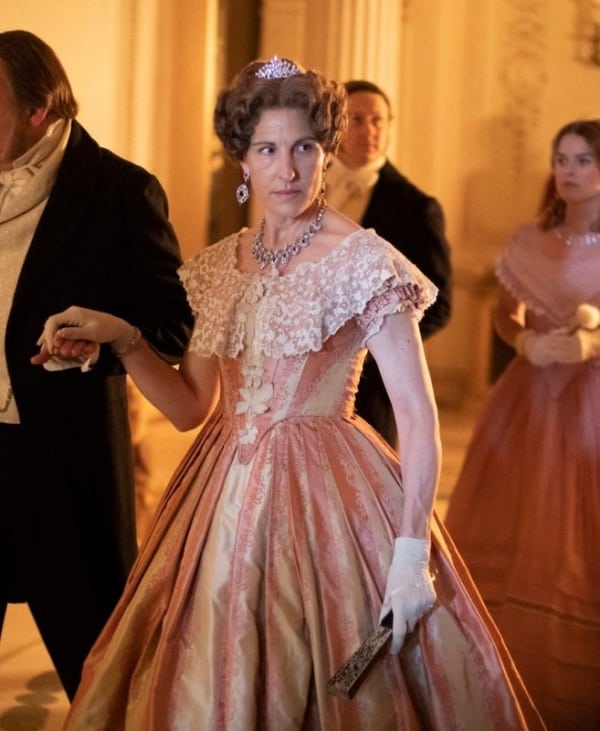 Her ballgown is definitely fancy, but tasteful — note the higher neckline than you COULD see, and the beautiful lace. I’m not 100% about the scrapbooking flowers down the center front, however. 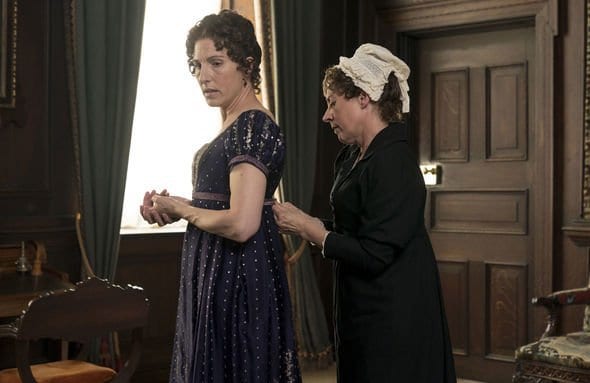 This dress was my favorite. 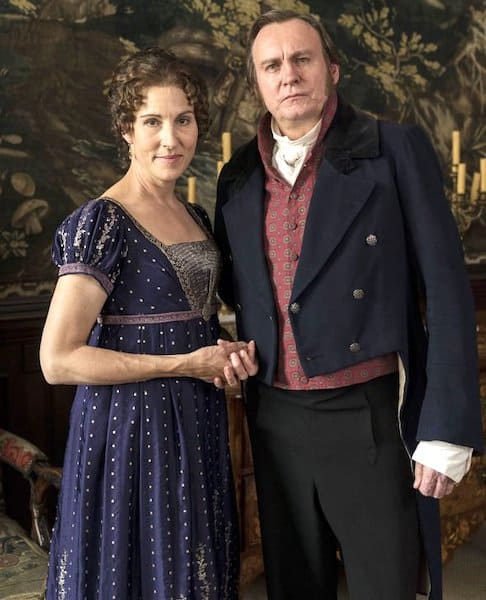 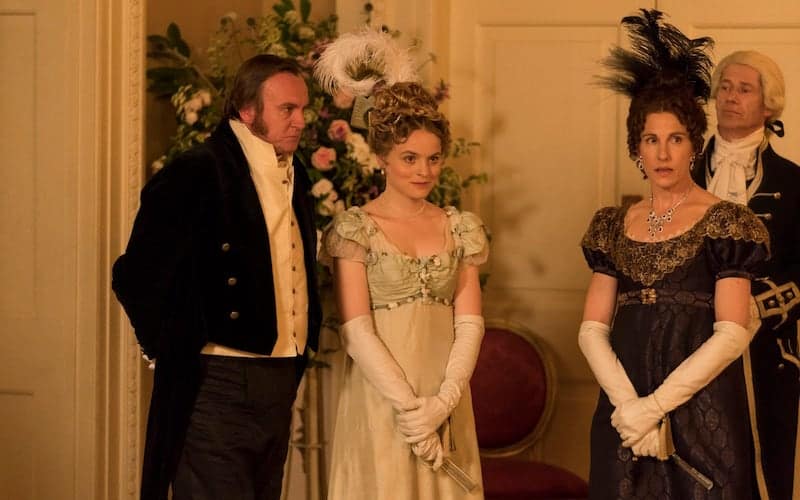 This was pretty too (along with daughter Sophia’s dress).

On the other end of the class spectrum is countess Lady Brockenhurst, played by Harriet Walter. She’s upper crust AND wealthy: “Lady Brockenhurst’s dresses are much paler and much grander. She was brought up with this assumption that someone would always be there to clean everything for her.” 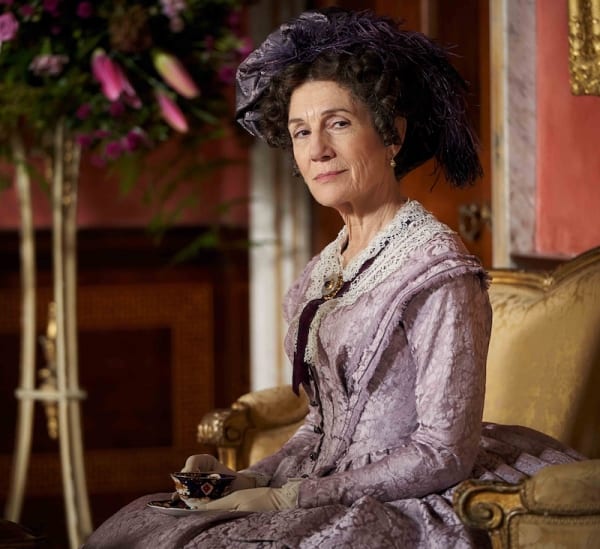 This lavender dress was probably my favorite. LOVE the fabric, the subtle use of fringe, and the turban-inspired cap. 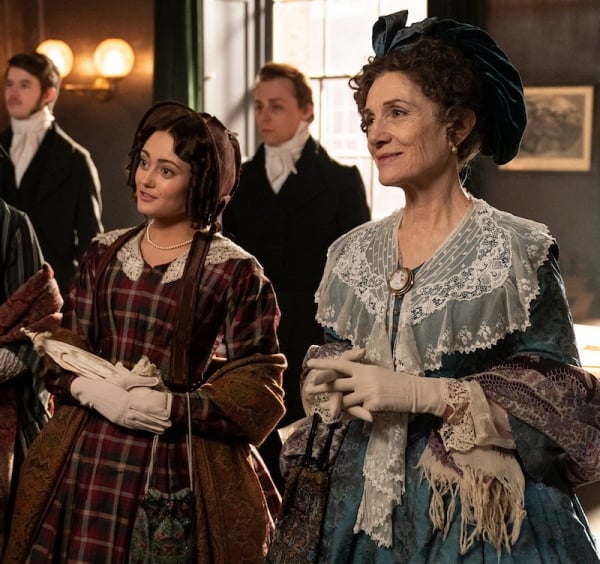 Lady Brockenhurst always wears beautiful lace, which would have been super expensive. 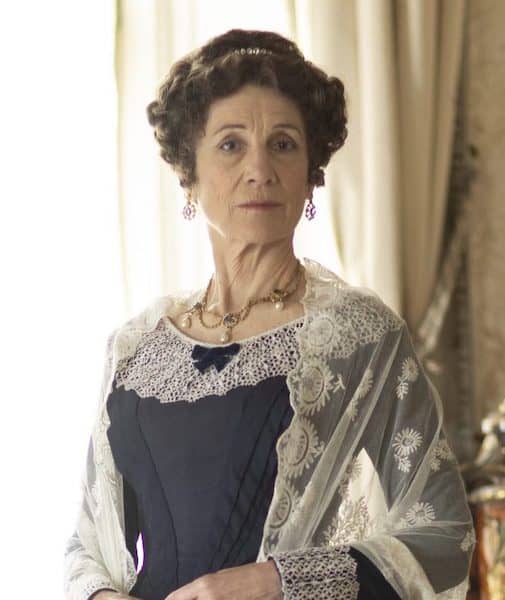 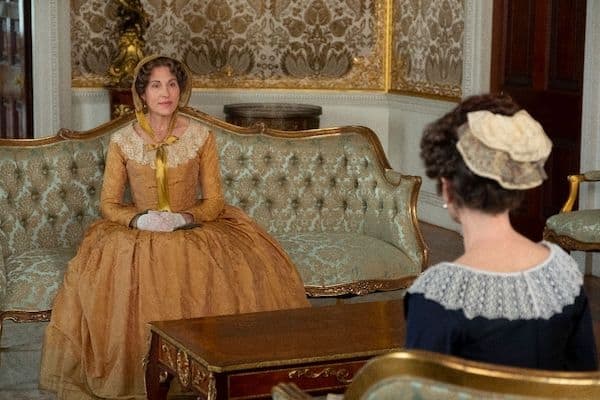 She even manages to make an indoor cap not too TOO dowdy, which is impressive. 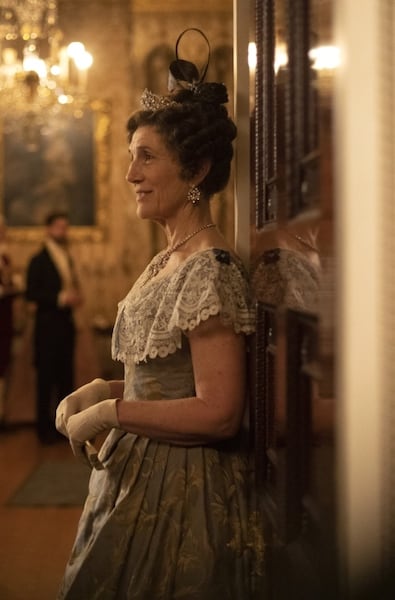 My main question is why she would have suddenly busted out 10-years-out-of-fashion 1830s hair for her fancy party, which would be an event she’d want to be MORE fashionable for than in her daily life. I know, costume/hair designers love these silly 1830s styles for how OTT ridiculous they are (thereby demonstrating the OTT-ness of the upper classes).

Susan Trenchard is Mrs. Trenchard’s daughter-in-law, and is wealthy and class climbing: 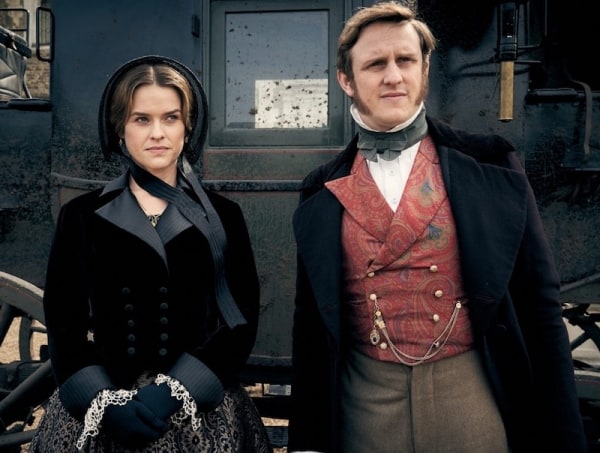 I do admit to loving menswear-styled Victorian womenswear, so that’s something. 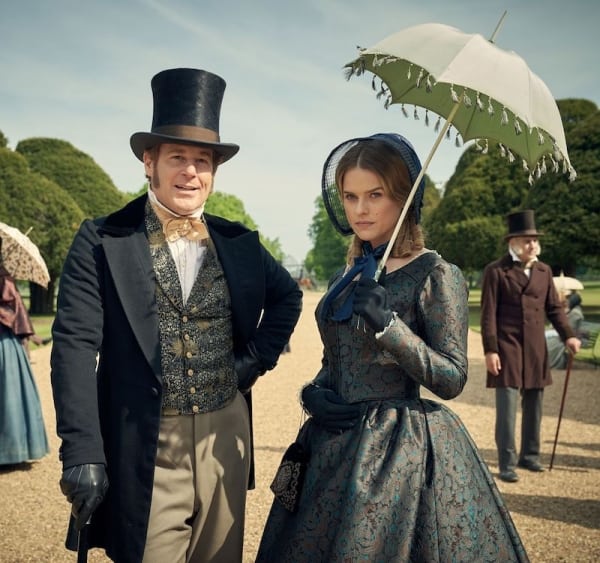 I have some questions about this — the fabric choice, the bodice seaming — but I’m letting it slide, because I like the sheer bonnet and the tassel-y parasol. 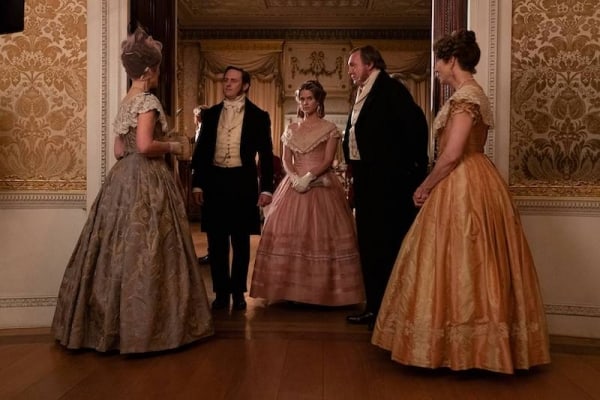 Susan is wearing possibly the most up-to-date gown among these three.

Ingenue Maria Grey and her mother, Lady Templemore, are aristocratic but cash poor: 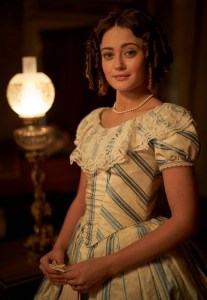 Okay, somebody explain to me 1. The shitty fit on this bodice, and 2. The unflattering, un-period aesthetic stripe layout. 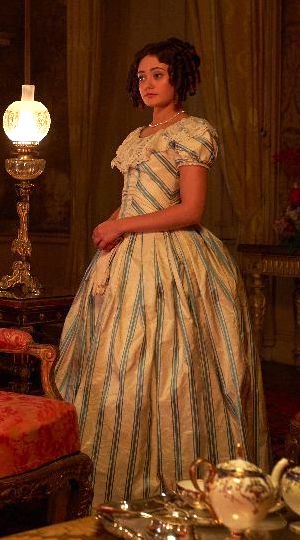 Because I don’t get it!! 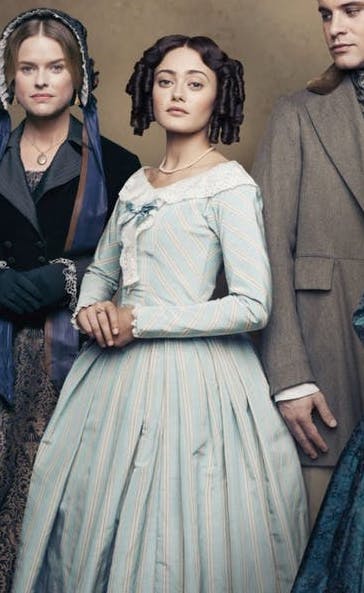 Maria’s family is cash poor, is that why her bodices don’t fit?? 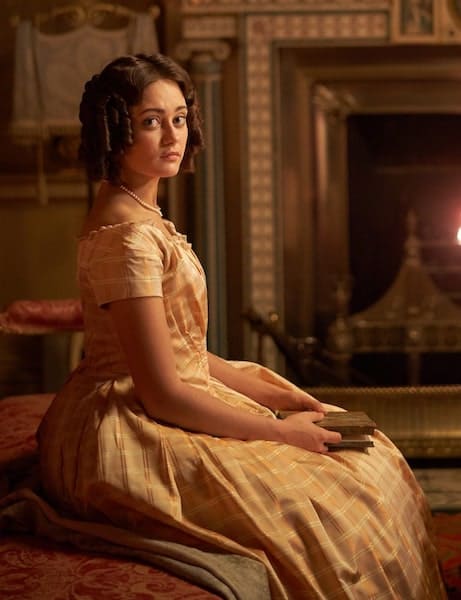 At least this fan-front style is supposed to fit like this. 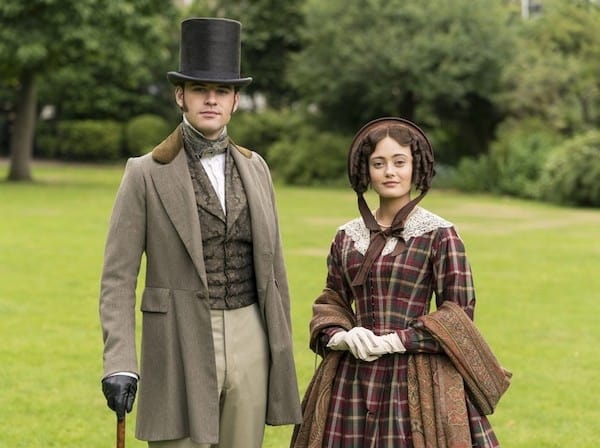 Hallelujah, something that fits right! Of course, it’s my Dickens Fair nightmare, but oh well. 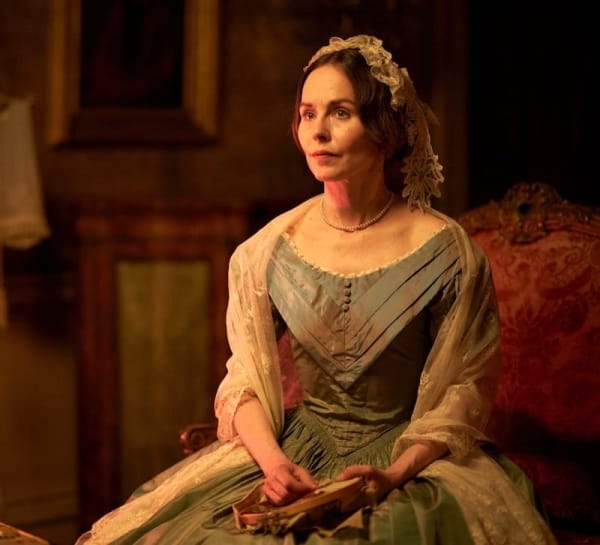 What are you thinking about Belgravia?