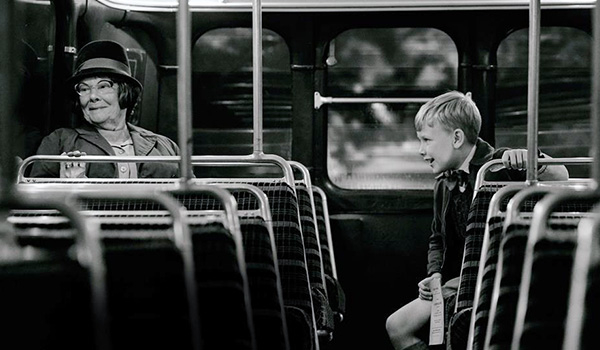 I wasn’t thinking I’d review Belfast (2021) for the blog because it’s set in August 1969 and thus violates our vague rule of “no movies after Trystan was born” by a few months. But I knew I wanted to see it, and when I did, I loved it so much that, fuckit, you’re getting a full review! Because I want everyone to see it, lack of period costumes be damned! I mean, it does have appropriate costumes for the movie’s period, but they’re not what we get excited about when we think “period costume.” Yet I’m excited about this movie and could easily watch it again.

If you haven’t already heard about this flick — since it came out at the end of last year and was heavily promoted on the awards circuit — Belfast is written and directed by Kenneth Branagh and it’s a fictionalized look back at his childhood when he and his parents left Belfast in Northern Ireland for England. Being Kenneth Branagh, even during lockdown, he easily assembled a stellar, and mostly Irish, cast with Caitríona Balfe as the mother, Jamie Dornan as the father, Ciarán Hinds as the grandpa, and Judi Dench (who’s of Irish descent) as the grandma. 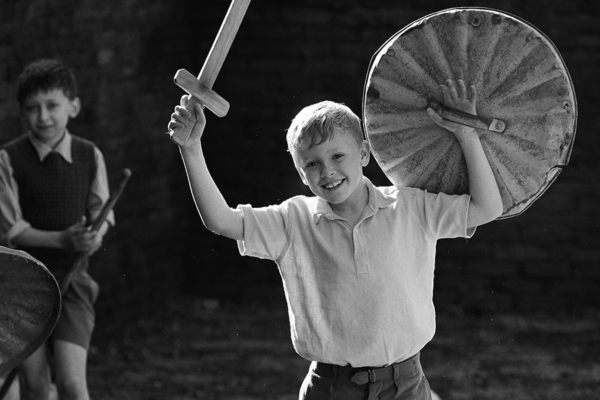 But the real star is Jude Hill, who plays 9-year-old Buddy, and the story is told through his eyes. His family is Protestant, and they live in a mostly Catholic neighborhood, which is under attack by Protestant gangs. Buddy’s family gets caught in the crossfire. The politics of the time aren’t really explained or dwelled on, although that drives the overarching action. Because the audience is getting Buddy’s perspective, we only overhear snippets of the adults talking about the situation and bits of the TV news. Buddy’s bigger concerns are how to impress a cute girl at school, and the meaning of a minister’s sermon about taking the “right” fork in the road. 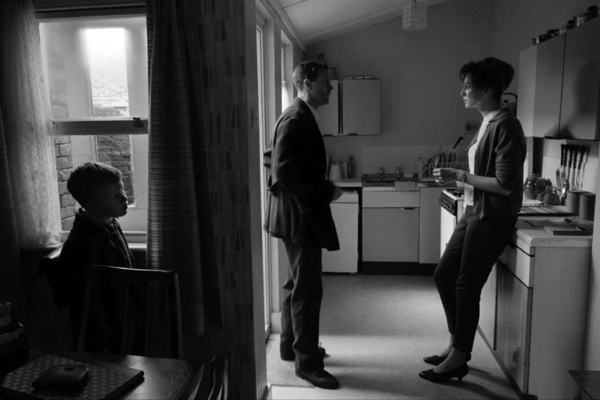 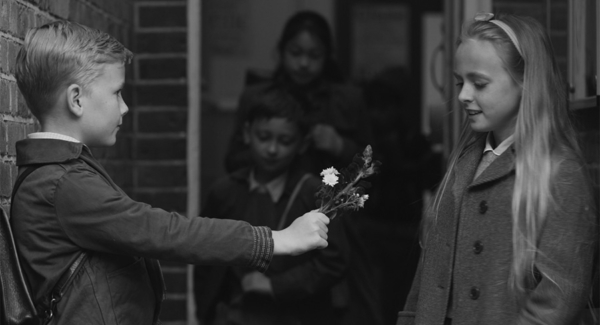 Writing this out, the film doesn’t sound like much. The plot nominally is whether or not the family will leave Belfast (it’s no spoiler that they do, given that this is based on Branagh’s life). But what’s wonderful about this film is the performances and the way it’s framed. There’s an affection for these characters and a fondness for this setting that comes through every scene. It’s not overly sentimental; the movie has dark and gritty moments too. It feels remarkably well balanced. Branagh won a well-deserved Best Original Screenplay Oscar for this movie (his first Oscar after five nominations too). The black-and-white cinematography is dramatic and beautiful, plus the late-’60s soundtrack really adds to the mood. 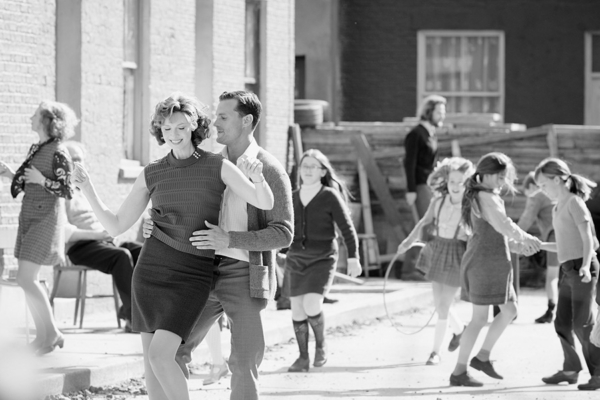 Costume designer Charlotte Walter is not necessarily a big name, but she’s done a fair bit of 20th-century period TV shows and movies, such as Blithe Spirit (2020) and Red Joan (2018). The characters in Belfast are working-class and, again, the focus is a young boy, so there aren’t any flashy costumes to be seen. But everyone looks right for the time and place. Walter did her research, as she said in a Focus Features interview:

“I looked at photographs. Because of what was going on, there are a lot of photographs from that period I could find online. Belfast was remarkably well photographed in the late ’60s. There are amazing photographs of everyday life, as well as soldiers in the streets. I remember some remarkable shots of kids in jumpers, shorts, and shoes with holes in them talking to uniformed soldiers.”

She also used a lot of vintage clothing. In Filmmaker Magazine, Walter said:

“I wanted to use as many original clothes as possible. The fabric of the original clothes was very particular. It was a time when manmade fibers were just starting to be popular. Because they were not natural, they had a sort of three-dimensional feel to them. They were quite harsh in a way.” 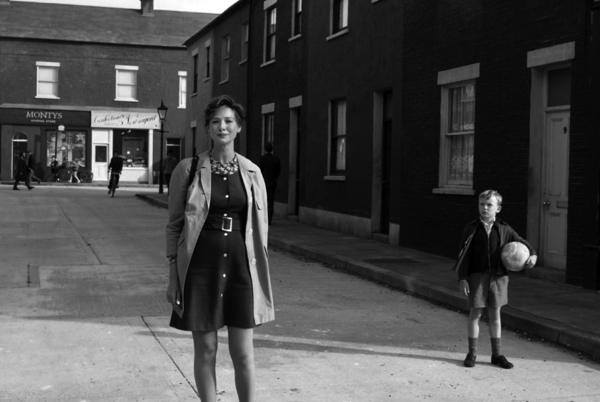 Walker also talked with the writer-director about how his family would dress, since this film is semi-autobiographical. In Filmmaker Magazine, she said of Branagh’s parents:

“They would get ideas from reading a magazine or going to the cinema. They wanted to dress slightly like the people they saw in films, but obviously within their boundaries of what they could afford.” ​​

Caitríona Balfe, in particular, gets some sassy outfits that show she’s a modern woman even as she maintains her home, hearth, and traditions. 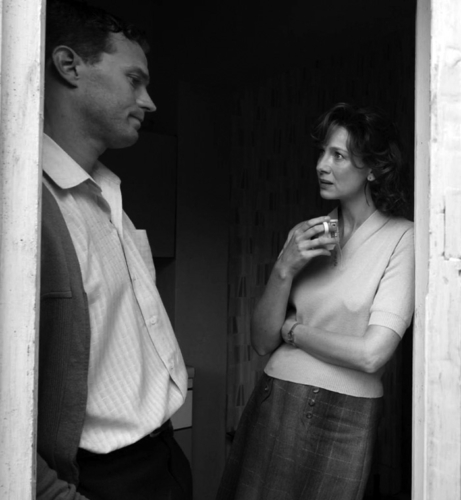 Walter continued in Filmmaker Magazine: “Ken said to me that both his mom and his grandma were great knitters. So, I thought, ’Of course they would knit themselves cardigans.’” 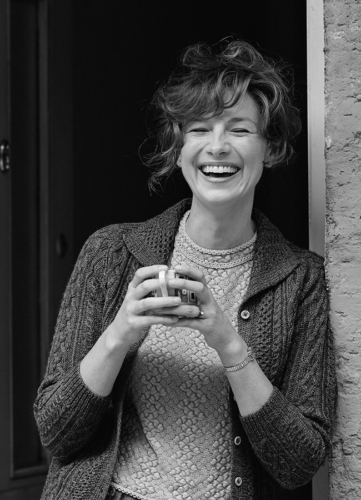 Not only did Walter use vintage clothing, she used vintage fabrics. In Filmmaker Magazine, she describes creating Judi Dench’s Granny costumes:

“I had two pinafores. One was an original ’60s pinafore dress — they’re practical dresses that you could work in as well. But also, strangely, I’d kept some fabric that had been my grandmother’s, which she’d used to make a similar garment for herself. I’d always hung onto this fabric thinking it was interesting and very ’60s and thought, ’One day, I’ll use that.’” … So, I had it made for Judi.” 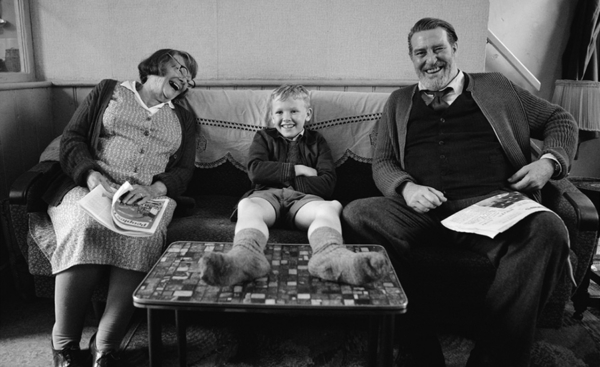 Make-up artist and hair designer Wakana Yoshihara also researched the period to create accurate looks for the actors. In an interview with Cinema Daily, she said:

“There are so many documented photographs available from that time because it was a very specific time in history. So there are a bunch of pictures for children, the adults, and people in the parks. I wanted everybody to look like somebody from those pictures and render the similarity. Most of the pictures that I had for the research are black and white. So when I saw the rushes, the dailies, I compared our work and the pictures that we had to see what we could improve.” 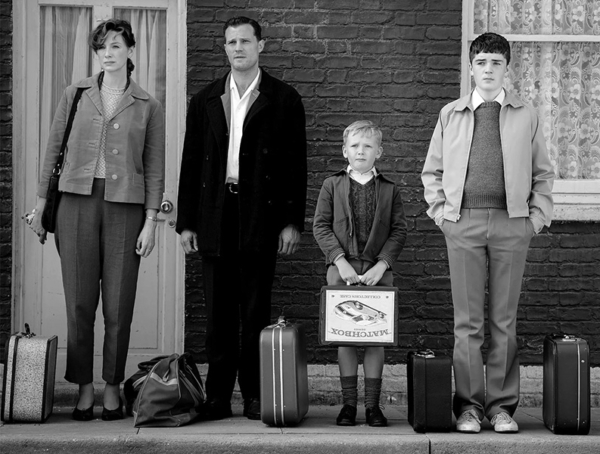 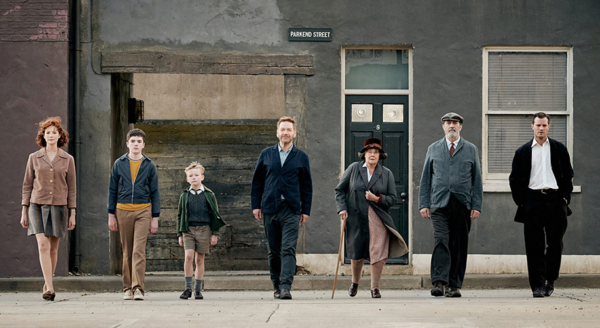 You really should see Belfast — you won’t regret it!