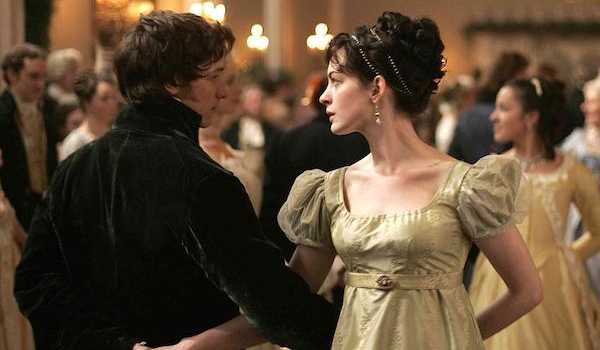 Shockingly, I actually really quite liked this – so long as I ignored the fact that the main character — a Regency-era writer named Jane Austen — had any relationship to the Jane Austen whose books I adore. The filmmakers took the few hints that exist about Jane’s youthful flirtation with Tom Lefroy and turn it into a Big Passion, complete with lots of references to her later writings. I thought it was actually quite well done — good acting, witty script, pretty to look at. All in all, it felt like I was watching a pretty good Austen adaptation, and that’s saying something! Of course, it’s pretty much a made up story and I’m not sure if Anne Hathaway is my idea of a young Jane Austen… The costumes ranged — set in 1796, the costumer chose to put the actors in a mishmash of high-waisted “Regency” styles and long-waisted 1780s styles. It doesn’t really work, because you can’t tell if they’re trying to distinguish between ages or classes (no rhyme or reason to who is wearing which style). Most of the high-waisted dresses are cut waaaaaaaaaaaaaay too narrow. I thought the 1780s style dresses, although incongruous, were very pretty and accurate to about 5-10 years earlier.