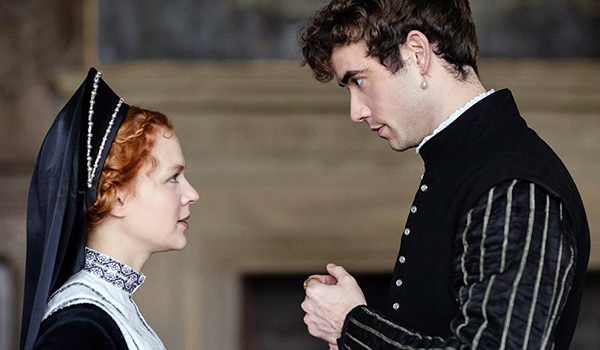 I left off at episode three of Becoming Elizabeth (2022), disgusted by the rapey storyline yet generally pleased by the costumes. Well, the rest of series was just more of the same and also a slog. Ep 4 opens with the young Elizabeth admitting to Kat Ashley that she’s had sex with Seymour multiple times and is afraid she’s pregnant. 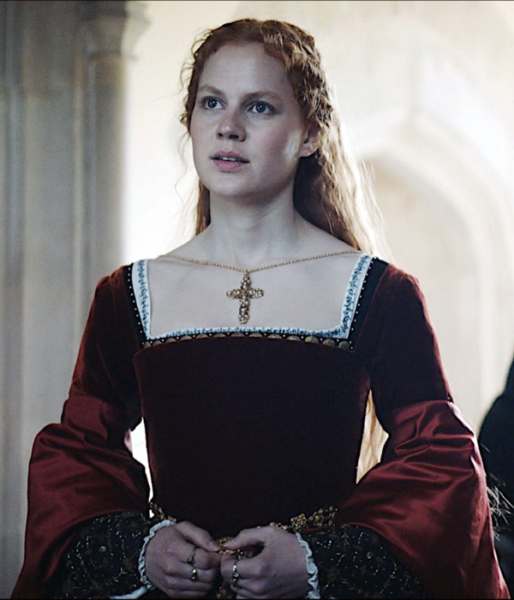 This is the first time she’s worn an all-red dress — when she’s afraid she’s knocked up. Kinda obvious costume design there. 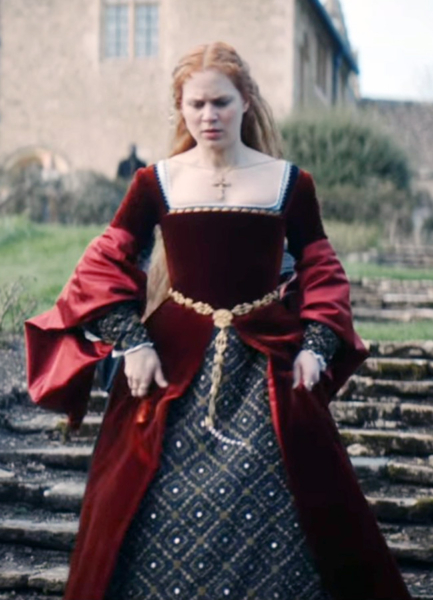 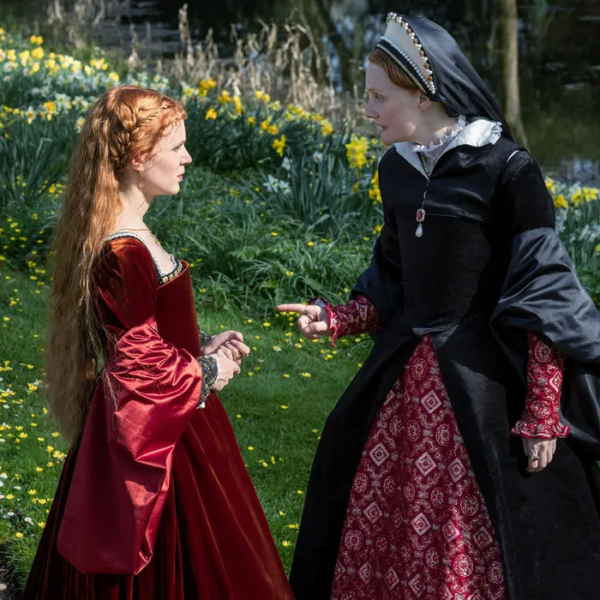 Mary might be the only decently portrayed character in the series — she’s shown to be canny, wise for her age, generous at heart but also guarded as needs be, and while true to her religion she’s not a crazed zealot like some portrayals of Mary Tudor go for. 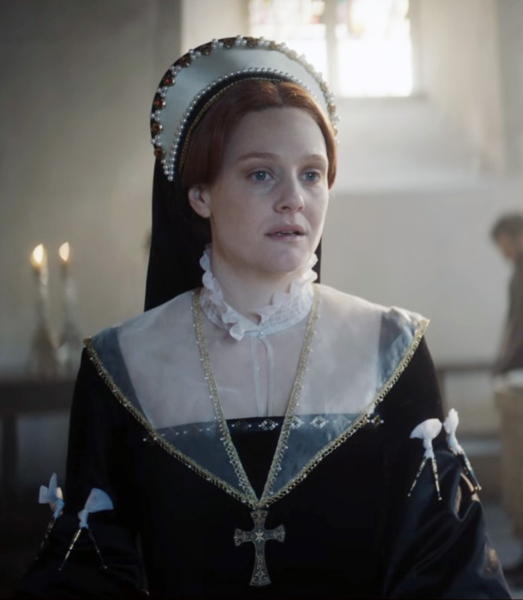 The double partlet look is elegant & a little glitzy. 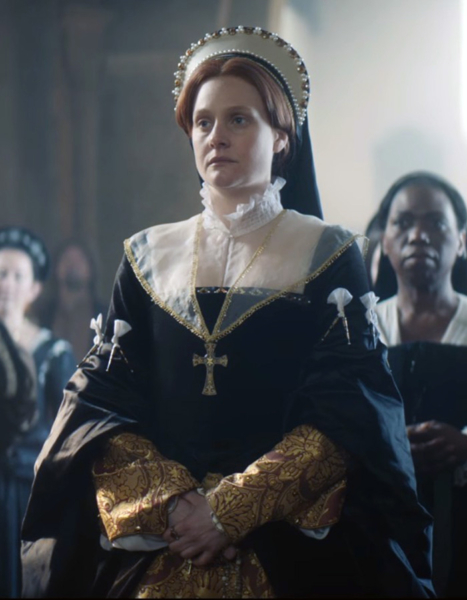 Where have I seen that before? …

Oh that’s right, in this portrait of Mary ‘s distant cousin, archduchess consort of Austria and the sister of Phillip of Spain, who Mary Tudor would marry in 1554. 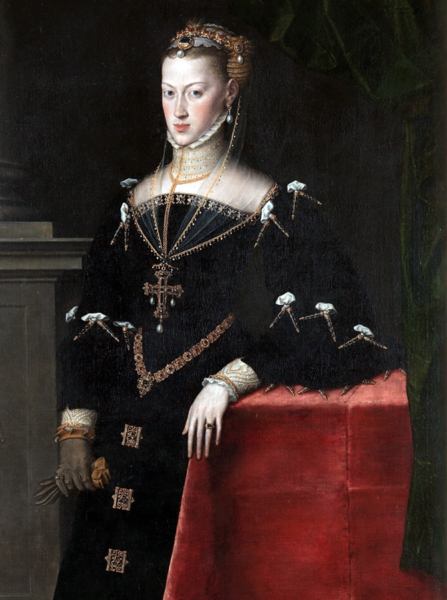 Of course, it’s not the Catholics but the people working for Edward who are shown as zealots here, beating up and stealing from Catholics in the name of the Protestant church, hanging and burning people hither and yon. For all the Reformation stuff the show tries to shove in for gratuitous violence, the Archbishop of Canterbury, Thomas Cranmer, isn’t even a character in the series! He’s the one who had huge influence over Edward when it came to pushing the Reformation.

Meanwhile Catherine Parr was definitely pregnant with Seymour’s child but doesn’t give a fuck about that and barely about him, just her standing at court. Which doesn’t matter because, as we all know, she drops dead as soon as she pops out the baby. Which nobody cares about — hey, that part is historically accurate!

Thomas Seymour goes from feckless molester of any-age-of females to pouty “the world is out to get me” in 5 minutes, and before his wife’s body is cold in the grave, he proposes marriage to Elizabeth, at court, whispering behind the King’s throne. Seymour is such an ass — he may well have been so historically, but as I noted in my first review, this series paints him as a “roguish” and “charming” jerk who you “just can’t help but love.” There’s precious little judgement of him for being the creepy predator and political schemer he ostensibly acts like. Even when he’s executed, that’s for political reasons (historically) and the show leans in on a brother vs. brother angle.

I’m so fucking OVER men getting away with being painted as sexy for being assholes! If he’s an asshole, make it clear that he’s an asshole, and any character attracted to him is deluded and being taken advantage of. Falling in love with an asshole shouldn’t be valorized. Writers and show-runners have choices in the stories they tell and how they depict characters, especially when the history is murky. It’s pure misogyny to keep letting gross men lord it over women on every level unchecked and unquestioned..

Ep 5 has Seymour and Elizabeth fucking up against a wall and Elizabeth saying she loves him. Which, UGH. WHY. Srsly, The Things I Do For This Blog. This show tried really hard to kill my boner for all things 16th century.

There’s a speech in ep 7 by Elizabeth where she yells at Edward and the court for being such scheming, suspicious jerks, and it would have come off a billion times better if the show hadn’t shown her fucking Seymour and being in love with him. Don’t want folks to think you’re a whore like your mom? Maybe don’t flirt outrageously with and actually have sex with the husband of your former step-mother. Oh, and don’t wear your mom’s necklace either. Not a good look, IMO. This show doesn’t paint Elizabeth as a particularly smart kid. 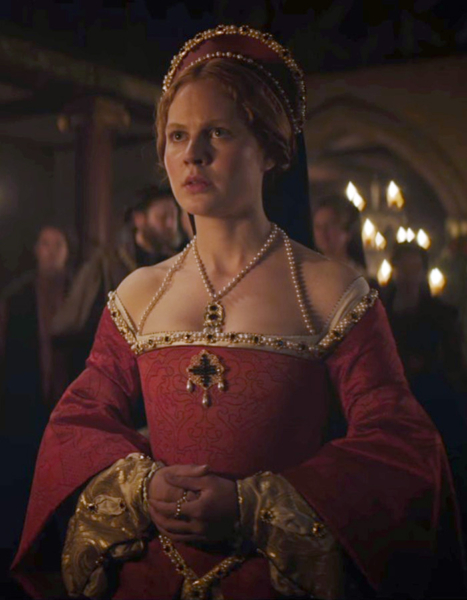 But she’s also wearing a nice repro of this gown: 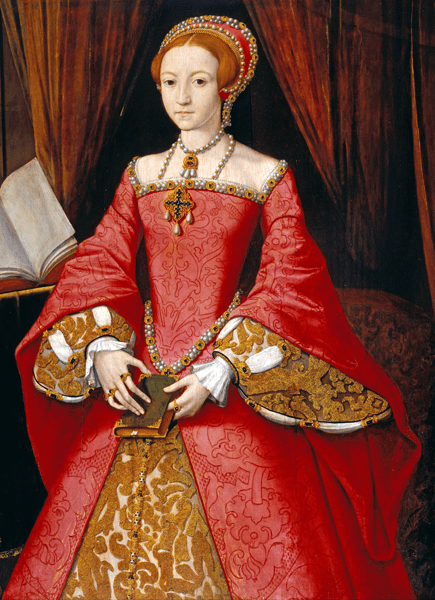 1546-1547 – Elizabeth I when a Princess attributed to William Scrots

That necklace is NOT the Boleyn “B” unless you squint and purposely mis-read it. 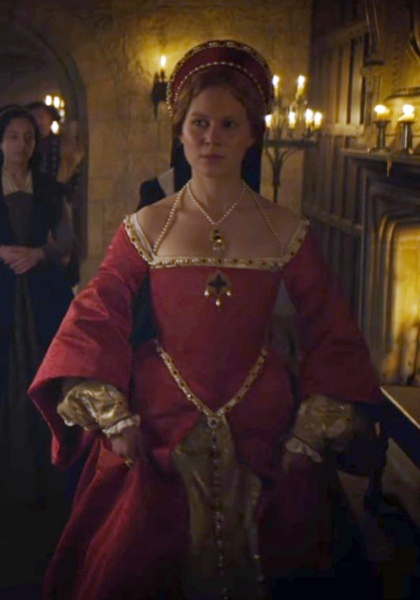 The repro fabric on this gown is really impressive though! 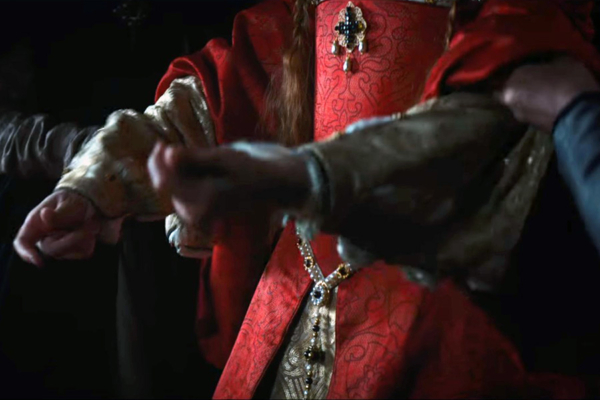 And I appreciated seeing all the layers when she was being dressed in this gown: 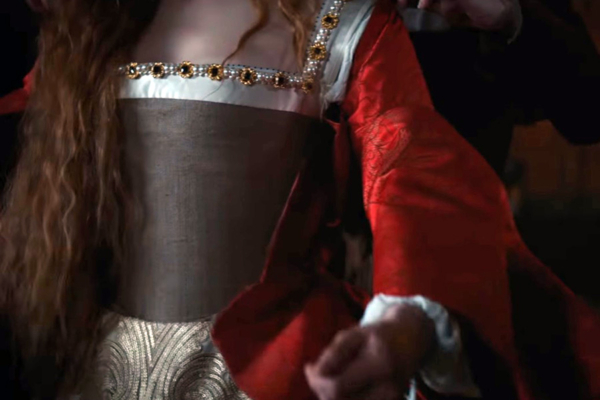 One thing I wanted to mention from the get-go that the show does get right is how there’s always a number of servants around titled folks like Elizabeth, Mary, and Edward. When they sleep at night, they have two or three servants sleeping in the same room. That’s one of those things you always read about, but isn’t depicted often onscreen. And it’s a key reason why conspiracy theories like Elizabeth having been pregnant at some point in her life would be so unlikely — she was surrounded by people, who’d have to have been bribed or otherwise silenced about any such event.

While I have issues with the whole portrayal of Robert Dudley and his relationship with Elizabeth (which for this show’s purposes has to be super-duper second fiddle to her Twu Wuv with Seymour, barf), I did like the introduction of Amy Robsart. Finally, she’s more than just a fatal stair-fall-victim. 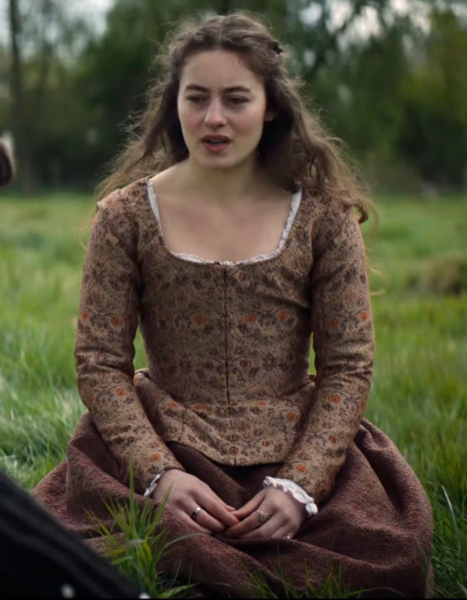 I was SO annoyed by the end of episode 8 though — Edward doesn’t die quite yet, which means someone plans for a second season. Fuuuuuuuuck. While part of me is intrigued because Romola Garai as Mary Tudor is one of the few good things about this series. But I don’t trust the showrunners to do anything else that tempts me to actually pay much attention to this mess.

One thing I did like about the final eps is that Starz played teasers for the upcoming Catherine de Medici series. Yeah, yeah, I have 16th century in my bones, and finally there’s a show about a person who hasn’t been totally done to death. At least The Serpent Queen looks more fun than this mess, which couldn’t decide if it was about a misunderstood teen romance or historical politics and couldn’t do either concept justice.

Did you manage to make it through Becoming Elizabeth?