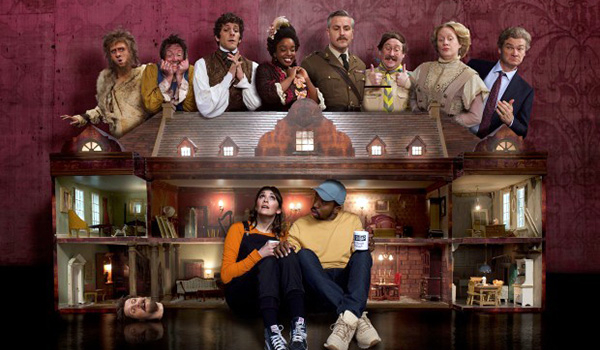 Looking for something light and historically adjacent? The BBC comedy series Ghosts (2019-) is good fun and currently available on HBO Max and BritBox in the U.S. The plot follows a modern couple who inherit a dilapidated mansion that’s inhabited by the ghosts of people who’ve died there over the centuries. Due to a near-death accident, the wife of the couple, Allison (Charlotte Ritchie) becomes able to see and hear the ghosts, while her husband, Mike (Kiell Smith-Bynoe) can’t. Mayhem ensues as they try to fix up the house and sometimes rent it out to make money for repairs.

There’s a main group of ghosts that Allison interacts with, plus lesser seen ghosts who “live” in places like the basement and don’t have as, uh, fleshed-out of characters (these are mostly medieval plague victims). The series slowly rolls out the backgrounds of these central ghosts, so we learn how they died — often rather hilarious, weird, or somewhat sad. Through Allison, the ghosts also learn about the current day, such as the lives of their families and descendants, and how technology works. Plenty of fodder for jokes there!

Many of the writers and actors in Ghosts are from Horrible Histories (2003-21) and Drunk History UK (2015-17), so this series has a similar vibe. If you enjoy those, you’ll probably like this one too. Costume designer Lucy Williams worked on Drunk History UK and a Horrible Histories TV special, so the costume style is not dissimilar here. Each ghost wears their same outfit throughout the series, being the clothes they died in. That identifies the historical era they’re from, so let’s look at them chronologically.

And I’ll note that although each character is stuck in the clothes of their original time period, the characters learn, grow, and change as they experience things, especially via Allison, so their mindsets aren’t stuck in the past forever. This becomes apparent in terms of various relationships that are discussed in the series, showing that if hundreds-of-years-old ghosts can become queer-friendly, everyone should be able to figure that out.

On to the ghost roll call, beginning with Robin (Laurence Rickard) the “caveman” ghost, who has been on the site of what’s now Button House the longest. He pretty much looks like a cliche movie/TV prehistoric person wearing raggedy animal skins. The character gets some good lines though. 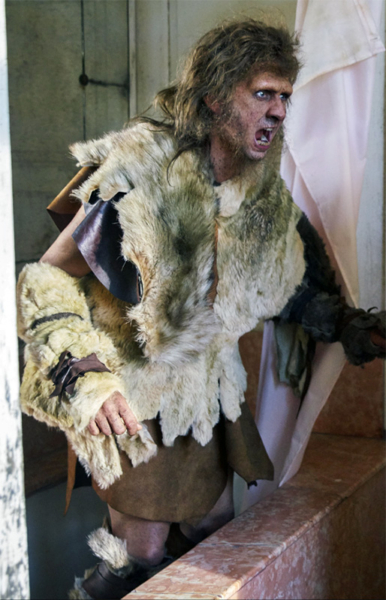 I side-eye the historical accuracy of this outfit, but he’s an enjoyably well-written character so I won’t bother to pick it apart.

Sir Humphrey Bone is an Elizabethan nobleman who was beheaded, so he carries his head around. The running gag is that his body (played by Yani Xander) drops his head (voiced by Laurence Rickard). Unfortunately, he’s mostly used for that gag in the first couple seasons, so he doesn’t have a lot of dialog and interactions with the rest of the characters until late in S2 and then his backstory is shared in S3. 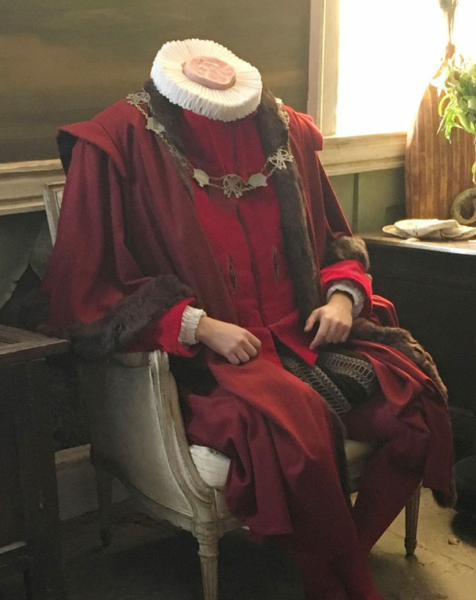 Nice standard-issue 16th-c. English upper-class man’s outfit. I like that it appears to be wool & has some fur trim. The ruff sets off the severed neck nicely.

Mary (Katy Wix) was burned at the stake as a suspected witch, so she’s supposedly from the early to mid 17th century. She’s very reticent to talk about her burning, so her story doesn’t come out for a while. Mary’s costume kind of bugs me because it’s so poorly or weirdly fitted, and I don’t understand what those layers are supposed to be. Is she wearing a princess-seamed kirtle over a loose jacket and a smock? I don’t get it. 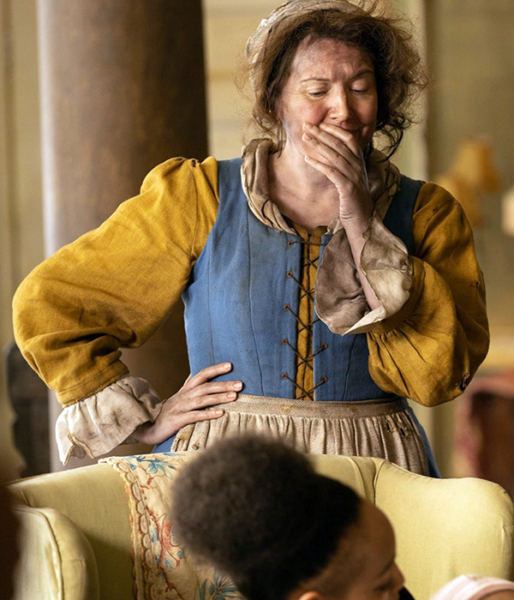 I’m bothered by the seaming on her blue kirtle. 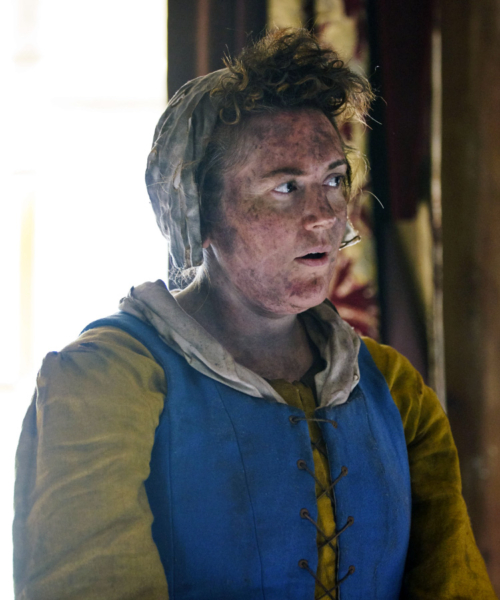 At least it doesn’t have metal grommets! I somehow doubt they’re hand-worked, they could be dark colored metal eyelets or metal worked over with dark thread. And it should be spiral laced. Yeah, I’ll nitpick the eras I care about! The cap is OK & and *not* an unfortunate biggins.

Kitty (Lolly Adefope) is a Georgian-era lady who’s extremely bubbly, chatty, and friendly, annoyingly so at times. I’m about halfway through the series, and it looks like we don’t get the real deal on her backstory until late in S3. But she has one of the most interesting historical costumes, so we can talk about that! Since there’s no back pleats (and no back-lacing, yay!), you could call this a robe à l’anglaise and a rather nice one. The trims and lace are appropriate, she’s wearing an accurate neckerchief, and her hair is lovely. The gown’s colors are a bit bright, but that works for a TV comedy. 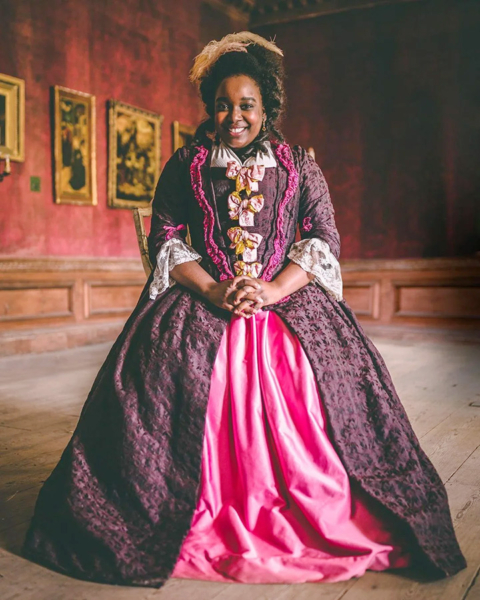 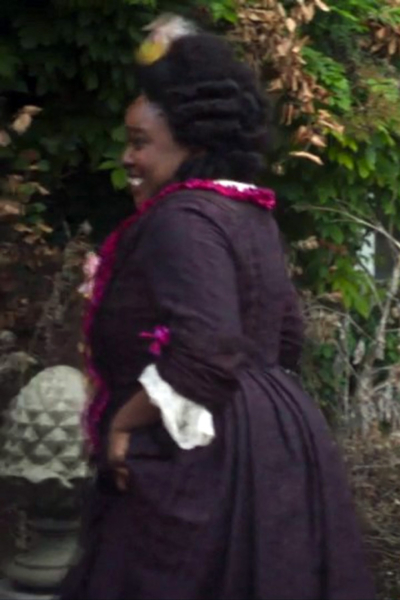 No back-lacing, that’s a win! 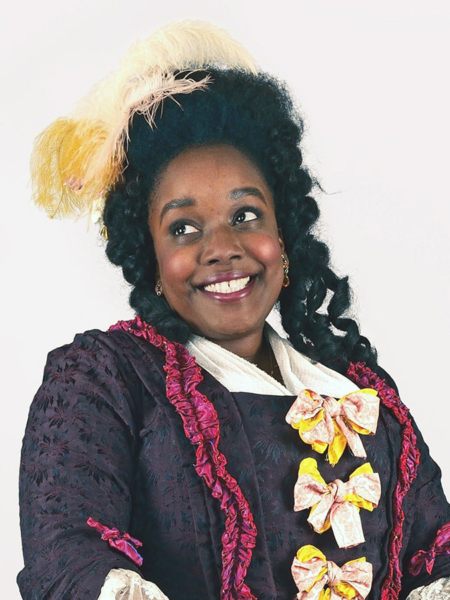 From here, it looks like a proper pinned-in stomacher. 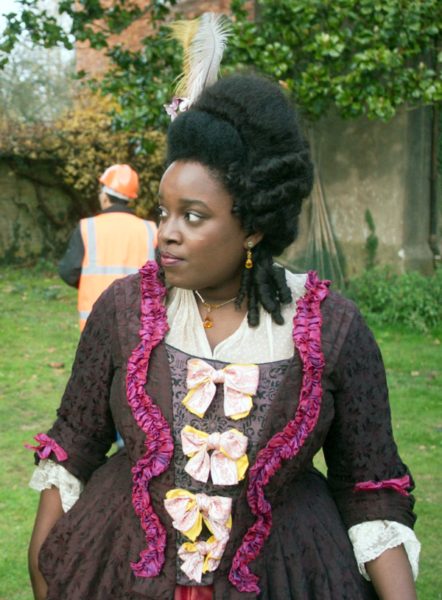 But here, it looks like a contrasting stomacher is sew in on one side & pinned on the other. Hmm…

Thomas Thorne (Mathew Baynton) seems to be from the Regency period, claiming Lord Byron as his poetic nemesis. Thomas is a melodramatic artsy fellow and a super Romantic, capital “R”! The reasons why become apparent in S2. 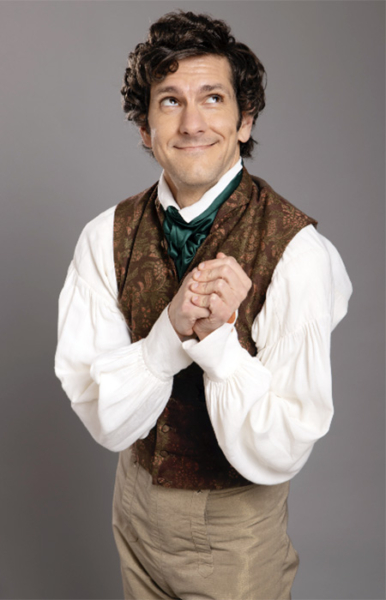 Lady Fanny Button (Martha Howe-Douglas) is the great-grandmother of the last person to live at Button House, the distant relation who Allison inherited it from. Lady Fanny is snooty and obsessed with manners. I think hers is the most historically accurate for her time of 1908-10s, and this may be the most elaborate outfit in the show. Hard to tell in photos, but her gown is a combo of pale lavender and ivory that’s typical of her period, and I find really pretty. 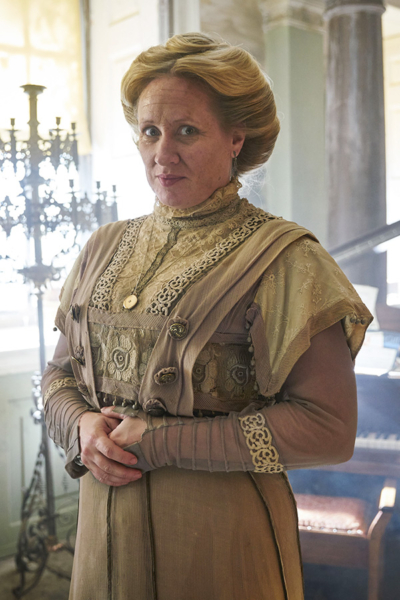 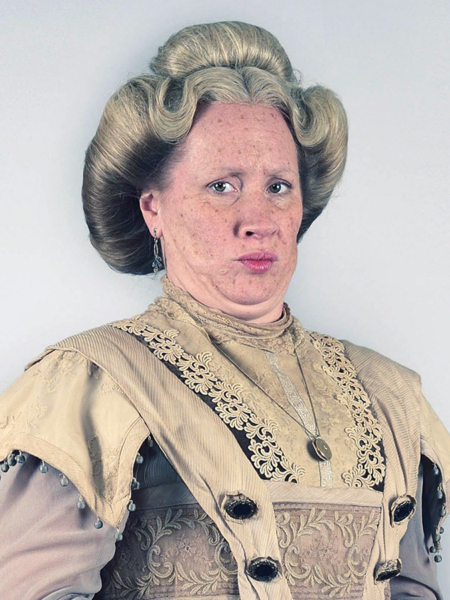 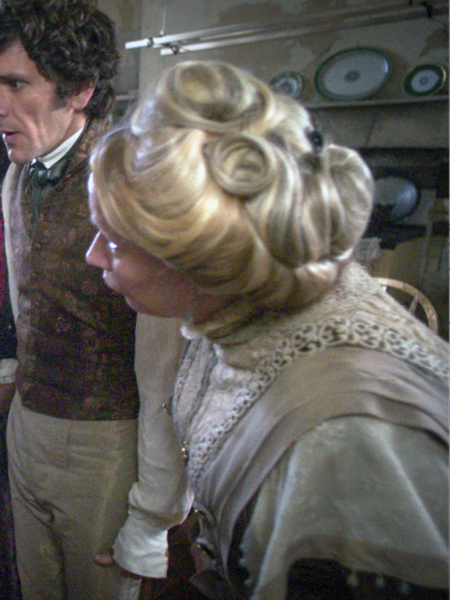 She rocks the elaborate updo too.

The Captain (Ben Willbond) died in the Second World War and is the very model of a modern major-general, sort of. He’s wearing a uniform, which, as per usual, I don’t have much to say about, though he’s a great character with more going on than it seems at first. 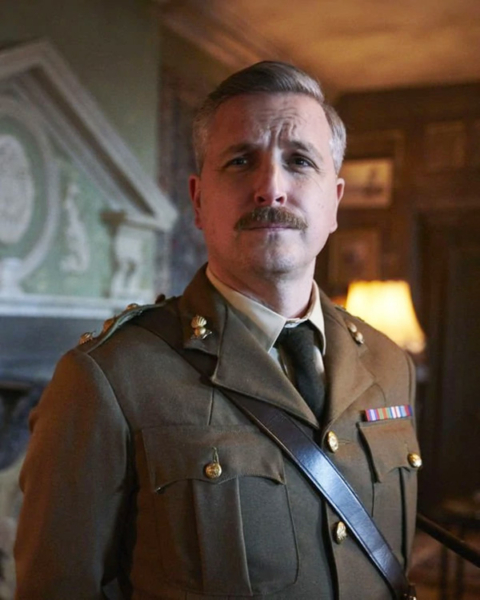 Pat Butcher (Jim Howick) is a scout leader who was leading an archery demo on the grounds of Button House in 1984 and was accidentally shot by one of his scouts. Modern scouts uniform, so nothing to say about that, but he’s a sweetheart of a guy. 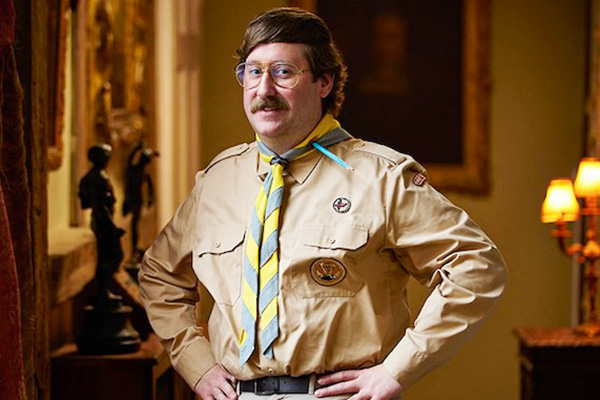 Julian Fawcett (Simon Farnaby) is a Tory MP who died in a 1993 sex scandal, so he’s left not wearing pants for eternity. HI-LAR-IOUS character. 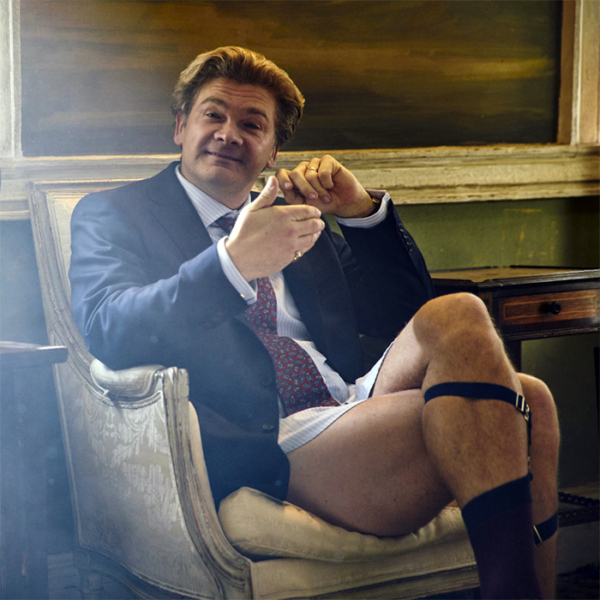 And yes, I know there’s an American remake that premiered in 2021 and starts a second season this fall. I may watch it at some point to compare, no idea yet!

Have you watched the original or the remade Ghosts?