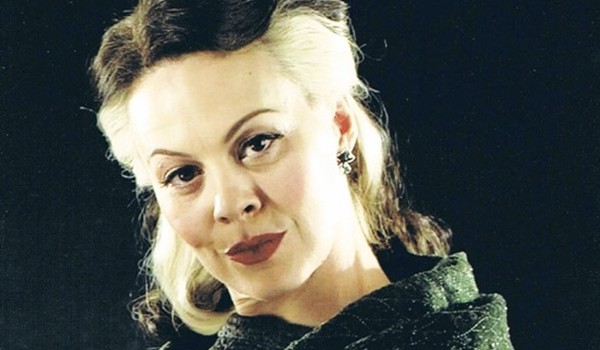 Hi everyone! It’s been a while. I sort of fell off the deep end of sewing commissions over the fall and winter which meant I had to cut waaaay back on the Frock Flicking. But it’s a new year, and commissions are done and over with, so I figured what better way to dive back into the blogging than to do a feature on one of my favorite Badass Babes of the costume flick genre, Helen McCrory.

Now, the youngins probably will immediately recognize her as Narcissa Malfoy, of Harry Potter movie fame (get off my lawn), but after this post, you’re going to have a whole new world opened to you of seriously wonderful historical movie villainesses. I like to think of McCrory as the anti-Helena Bonham Carter; while HBC has played her share of evil characters (and of course, also did a stint side by side with McCrory in the Harry Potter movies as Narcissa’s sister, Bellatrix LeStrange), McCrory slides into the villainess role with an air of polished refinement, as opposed to HBC’s brand of crazy bad girl. There’s just something deliciously natural about Helen McCrory in a baddie role, and lucky for us, she has quite the repertoire of costume flicks to discuss. So let’s start from the most recent and work our way back.

Bill hasn’t been released yet, and there’s still precious few stills of the costumes floating around, but it promises to be an … interesting … take on William Shakespeare’s “lost years” during the waning part of Elizabeth’s reign. Brought to us by the Horrible Histories crew, it’s not fully clear what type of character QEI will be (she’s typically cast as either an a young ingenue or a threatening old woman, and judging by the two whole photos and the recently released trailer of McCrory in Elizabethan drag, it looks like they’re setting her up for the latter). I do like that McCrory went on the record that she insisted on playing QEI with visible smallpox scars, which allegedly gave her children nightmares (because nothing is as terrifying as an old lady?).

Special Frock Flick points if you watch the trailer and can name the film that the gown McCrory is wearing comes from. 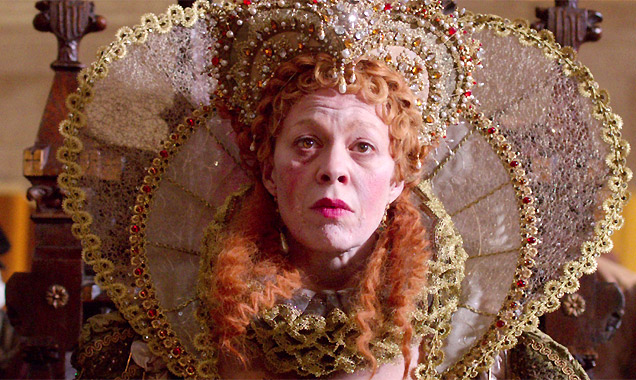 In the Kate Winslet vehicle we are all waiting for over here on this side of the Atlantic, McCrory plays Madame Le Nôtre, wife of gardener to the Sun King André Le Nôtre. Since Le Nôtre is being set up as Winslet’s love interest in the film, we can expect McCrory to be one of the principle antagonists. As you will see further down this list, this isn’t McCrory’s first romp in the 17th century as a scheming noblewoman, either. 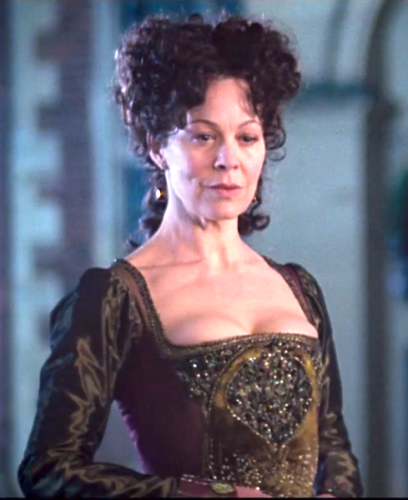 Nothing about this face says “Hello, welcome to Versailles!”

I will fess up that I haven’t gotten around to watching much of this show, but what I have seen has been pretty good. McCrory plays Madame Kali, a spiritualist, and someone who very likely is up to no good (NO SPOILERS PLZ) at least judging by the sheer amount of green eyeshadow they have her wearing. Also, that hair. Practically screams “I do not have your best interests at heart.” 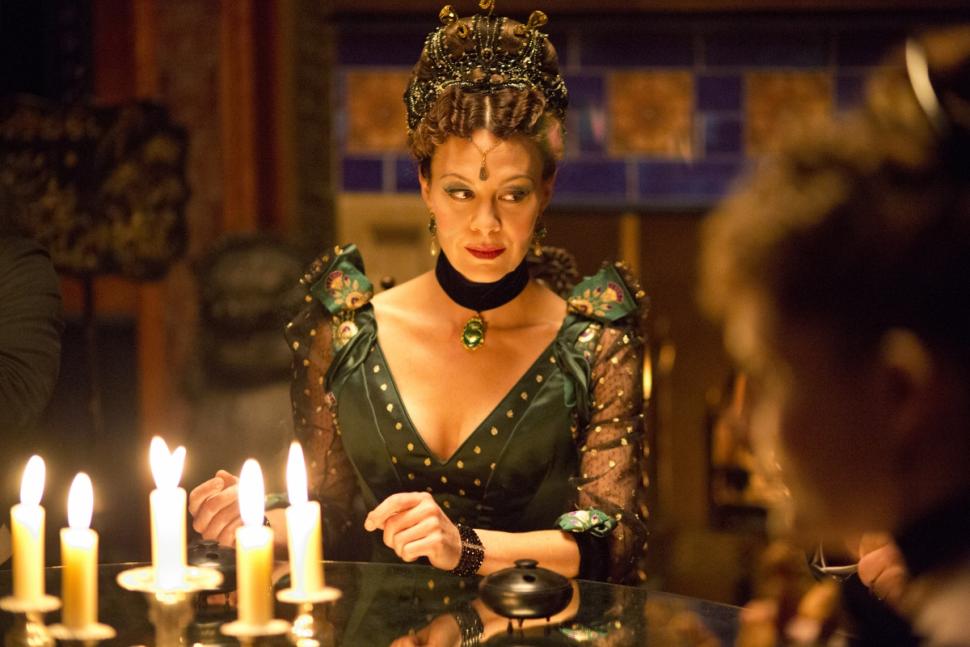 Would you trust someone who wears her hair like that?

Another British TV series that I fully admit to being remiss in watching, Helen McCrory plays Polly Gray, the matriarch of a Brummie gangster clan living in post-WWI Birmingham. She’s violent, unhinged, and wears a lot of saturated reds and violets and generally looks like she’s been rode hard and put away wet. I’m going to watch this series solely for the fact that McCrory excels in this sort of role, and I hope I’m not disappointed (again, NO SPOILERZ). 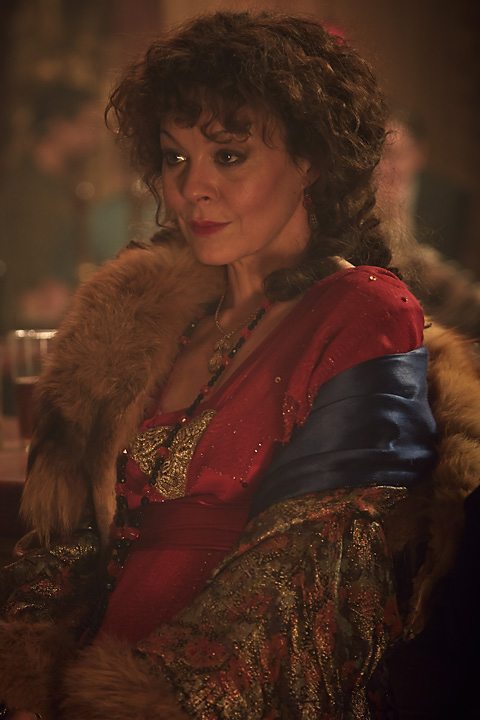 Trystan has already covered “The Vampires of Venice” and the costumes therein, so this is just a brief look at McCrory herself as Rosanna, the main baddy alien who is most definitely up to no good in that ruff. 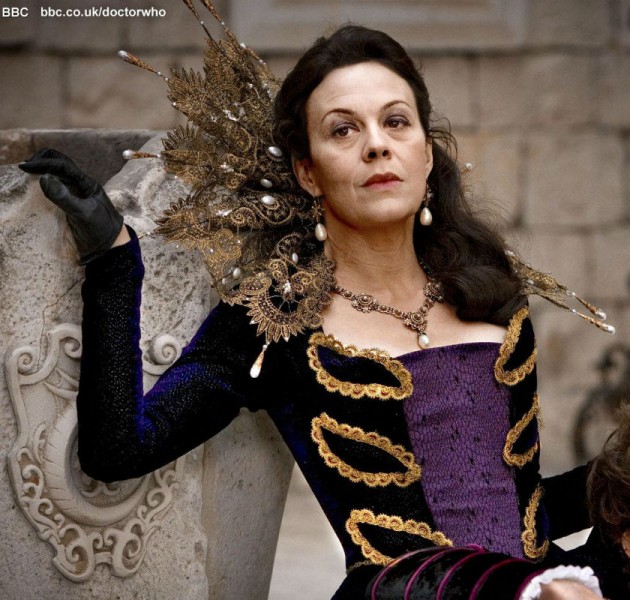 Where have I seen that ruff before?

McCrory makes what amounts to a cameo in this highly fictionalized biopic of Jane Austen’s early years. She is cast as Ann Radcliffe, the seminal female author of the Gothic genre that allegedly inspired Austen to write Northanger Abbey. However, their meeting in the movie goes less than ideally, as Jane discovers that Ann is socially awkward, probably crazy, and cut off from society in part because she insisted on becoming a published author under her own name. She all but tries to dissuade Jane from following in her footsteps, leaving Jane conflicted about her desire to be an author. 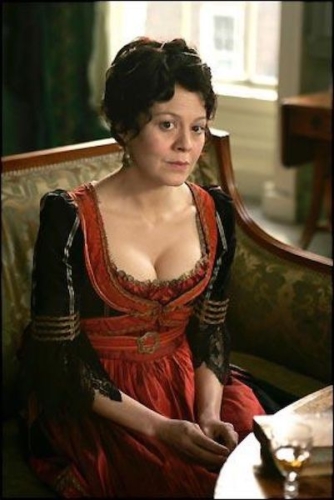 OK, I fully admit that I’m skirting the boundaries of the term “historical movie” with this one, but since the events of the film happened almost 20 years ago (crap, I’m old), I’m going to go with it. Also, I just love McCrory’s portrayal of Cherie Blair, wife of the former British Prime Minister, Tony Blair. She plays Cherie as cheekily anti-monarchist, who can barely control her eye rolling as she has an audience with the queen. She’s not in much of the film, but what little she is in is a joy to watch as she practically crackles with impish impertinence. 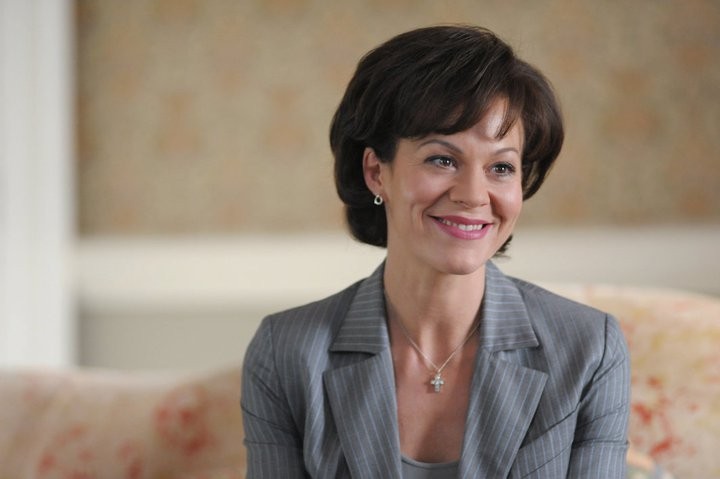 “This monarchy sucks, your majesty. I vote that we kick you out and start a democracy. Who’s with me?”

“Sherlock Holmes and the Case of the Silk Stocking” (2004) – Mrs. Vandeleur

I admit that I just discovered this little gem in the process of writing this article. Staring Rupert Everett (aka, my tall dark and handsome and completely unavailable boyfriend) as Sherlock Holmes, McCrory plays the questionable love interest of Dr. Watson, Jenny Vandeleur, an American psychoanalyst. Her accent isn’t bad, either. Is she a good guy, or a bad guy? You can find out for yourself because the entire show is on YouTube right now. 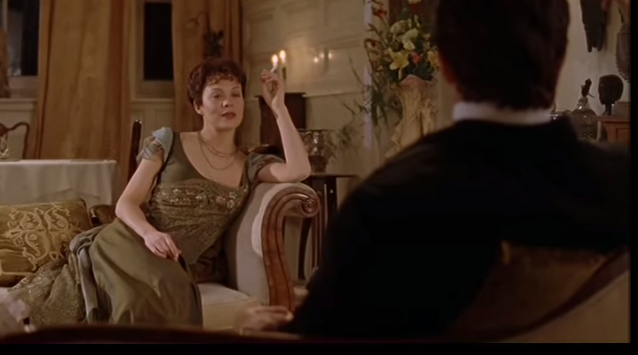 “I’m American and edgy. Dont mind me if I smoke while I deconstruct your charming sexist notions.”

My hands-down favorite role of McCrory’s is as Barbara Villiers, who, during her 20-something year reign as chief mistress of Charles II, was known as “the uncrowned queen” of England. In this miniseries, McCrory is fabulous as the undisputed top tart in Charles’ vast harem, until the king begins to tire of her and look for younger, tartier pastures. You could almost view this series as having two major story arcs that occur more or less in succession: The first is Charles’ reclaiming and restoration of the monarchy post-Cromwell, and the second is Barbara Villiers’ rise and fall against the backdrop of the sexual free-for-all that was Charles’ court. McCrory plays Castelmaine as someone who knows exactly what the king wants and how to make sure he gets it … Provided she gets hers first. 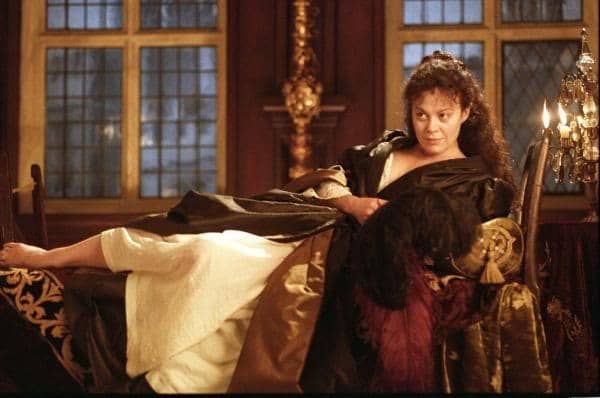 “I am completely trustworthy and totally innocent.”

I have left a few things off this list, true, but I think these are the highlights of a career of badassity. What’s your favorite Helen McCrory role?