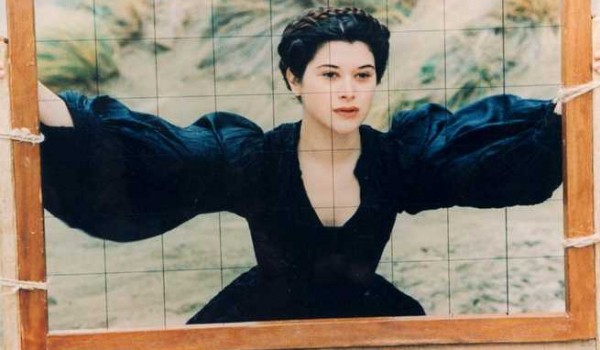 Artemisia was one of those films I was half-aware of when it first came out in 1997, but somehow never managed to watch it. I’ve even had the DVD sitting on my dresser for well over a year now, and I still hadn’t gotten around to it until an article by Tonya Klowden reminded me that Artemisia Gentileschi’s very public rape trial in the early 17th century was suddenly very important in the modern context of how a woman who was violated can be doubly and triply violated by the law and public opinion if she breaks her silence. So, I had this whole idea of writing this post about connecting Artemisia’s harrowing ordeal with that of Christine Blasey Ford, Anita Hill, the #MeToo movement, and so forth.

And then I watched the film.

Just do yourself a favor if you know anything at all about Gentileschi, don’t get yourself caught up believing that this film is anything more than a nice little fantasy about a pretty young girl who falls in love with a seriously weird-looking dude who teaches her stuff about painting and sex.

If you’re expecting it to be a faithful rendition of the seminal years of Gentileschi’s late-teens wherein she was raped by her tutor and then pursued him in court for restitution, you’re going to be seriously disappointed. 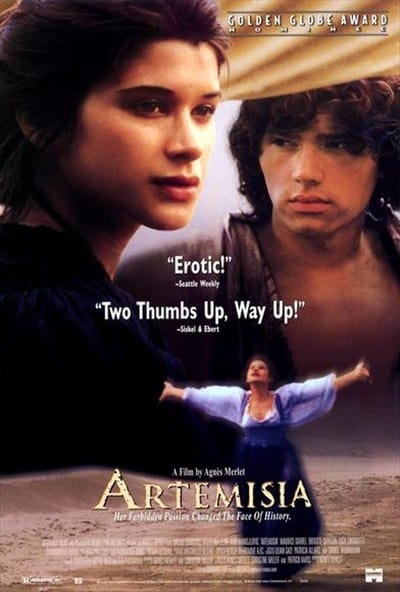 For starters, this guy in the promotional images isn’t Artemisia’s love interest. He’s just a random kid Artemisia knows and tricks into undressing for her so she can draw him naked. 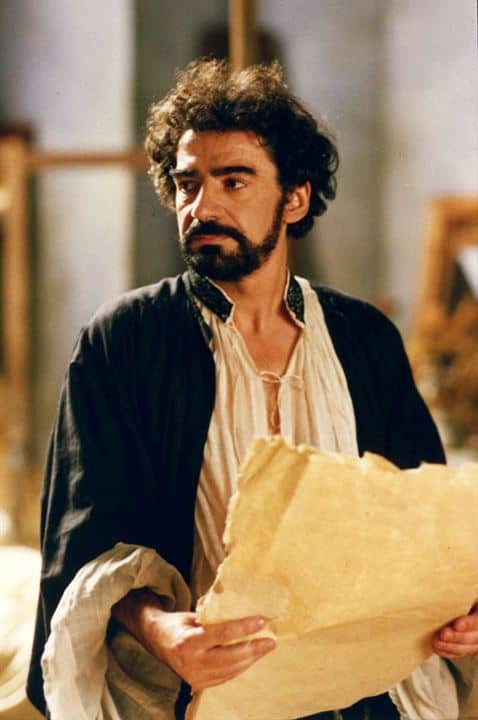 It’s this guy. Who does look a lot like Holofernes, but other than that, I’m not seeing the attraction here. 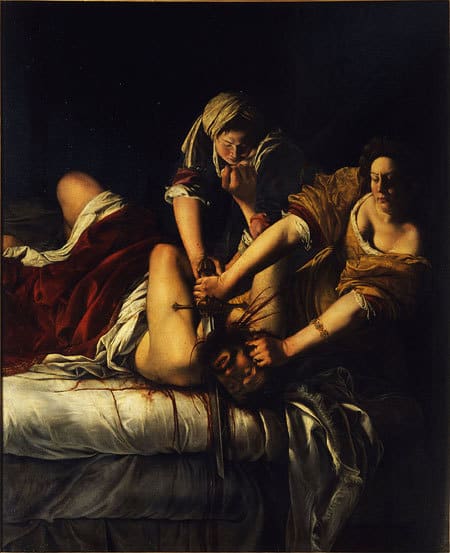 I definitely can see the resemblance.

For those of you who were not there, Artemisia follows a fairly standard formula: It takes a really interesting historical female character and then completely disregards the actual story and inserts some ridiculous fantasy-made-up-bullshit that entirely strips the history out and replaces it with a puerile sex-romp filled with beautiful naked bodies and some high-minded nonsense about true love or whatever.

Artemisia goes one step further, because not only does the film denude the content of historical facts, it completely flips what was arguably the most significant and defining moment in Artemisia’s life — the sensational rape trial brought against her tutor — and makes it about a forbidden love story between said tutor and Artemisia. Instead of Artemisia bravely accusing the man who raped her, even withstanding torture to get her to recant, the film makes Artemisia the one who pursued and convinced Tassi to become her lover and then when her daddy found out and hauled him before the court for raping his daughter, she bravely refuses to accuse Tassi of rape, even under torture. Tassi then valiantly makes a false confession to save Artemisia, and the lovers are forced to part ways forever.

And that whole “Tassi looks like Holofernes” angle comes into play in a big way in the turning point in the plot, but instead of Artemisia channeling all of her rage over being raped into the canvas (as is the current interpretation among art historians), the film tries super hard to make the connection between Artemisia’s pain over being parted from her true love by painting his face as one of Western mythology’s most notorious rapists.

So, what about the costumes? Well, they’re pretty decent, so I can at least give the film some credit for that. Costume designer Dominique Borg definitely was taking cues from Gentileschi’s artwork for Artemisia’s costumes.

Artemisia’s outdoor studio. Even with the considerable issues I had with the historicity of this film, I did love the way the set design and lighting worked to create the feeling of having stepped out of a Genteleschi painting. 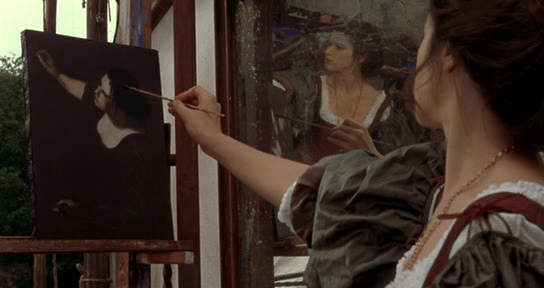 Artemisia painting her famous self-portrait, outdoors in natural light. Another thing that I can give credit to this film for is not inserting crappy re-paintings of these famous portraits. This is a reproduction of the actual painting, not made to look like Valentina Cervi. 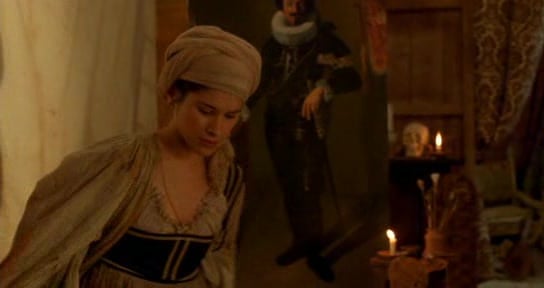 I was pleased to see lots of high-waisted bodices, as is appropriate for the first quarter of the 17th century. 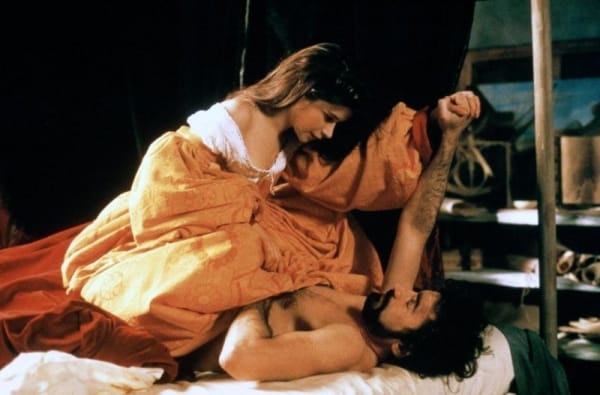 After basically going in dry and taking her virginity to great pain and bloodshed, Artemisia returns to paint Tassi and then teaches him how to please a woman. I don’t know about you, but none of my art lessons went like that. 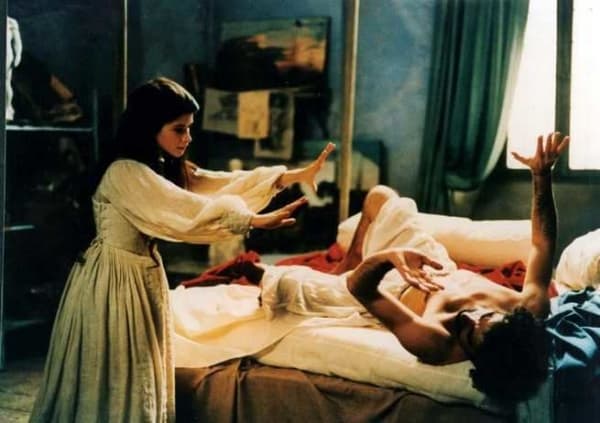 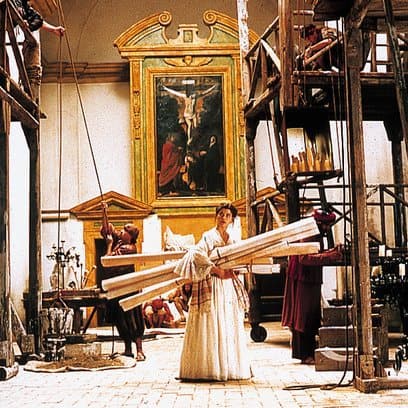 Artemisia delivers the cartoons she sketched for her father.

Does it irritate you when rape is whitewashed as a love story between two misunderstood lovers? Rant about it with us in the comments.