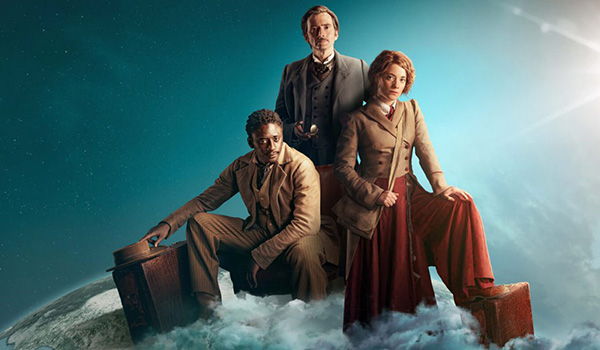 It’s just a couple episodes in, but the PBS adaption of Around the World in 80 Days (2022) starring David Tennant has potential. Having read the book, seen the 1956 film, and watched several theater versions, I have opinions about the material, and clearly this latest TV adaptation is not strictly faithful to Jules Verne. That has good and bad points, as always.

I do like that this eight-episode series gives a lot more time to tell the story, and this far in, I can tell that they’re using the time to flesh out the characters’ backgrounds and motivations, something that’s sorely lacking in the book. The original Phileas Fogg is almost of a caricature of an 19th-century upper-class Englishman — he is stiff, reserved, methodical, over-confident, and believes the English way is the best and most correct way of doing anything. He’s colonialism personified when he tours the world, seeing local cultures as exotic and beneath him and his English teatime. That said, he’s can be a decently moral person and treats individuals with respect. He manages to inspire trust and loyalty in his new valet Passepartout and love in the Indian princess Aouda. Most adaptions focus on Fogg to exclusion of the other characters, something this TV version remedies. Tennant’s Fogg is not the one in the book though — he’s tortured by something in the past and tends to be anxious and nervous. Hard to tell how that will play out over the series. 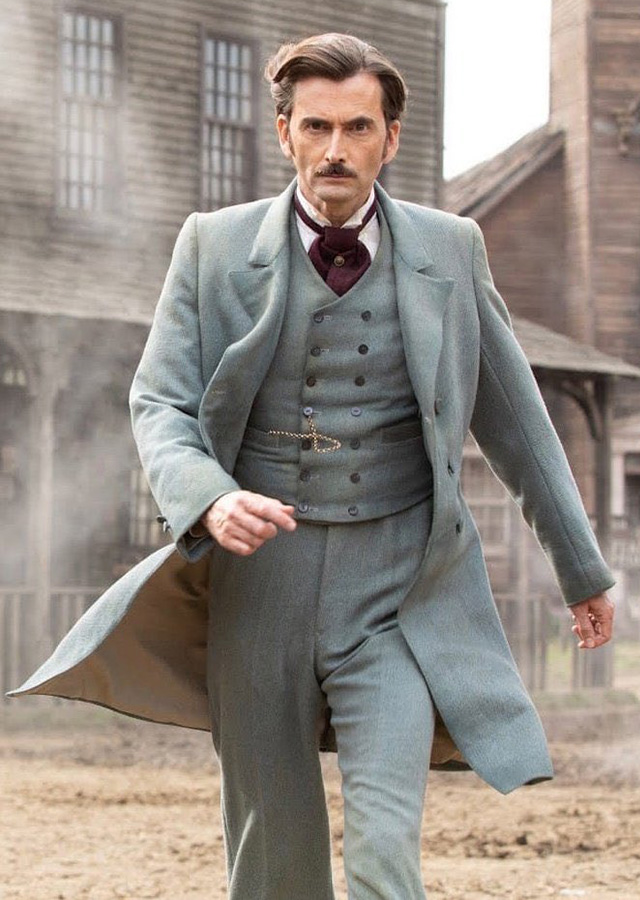 Apparently, he gets more bad-ass (or fakes it till he makes it).

Finally, Passepartout (Ibrahim Koma) is not just a useful Frenchman, ready to perform any service Fogg should require. I like that he has a complicated life before meeting Fogg, plus he gives his employer a bit of attitude. The character is just so one-note in the book and other versions. I enjoy any scene with Passepartout and want to see more. 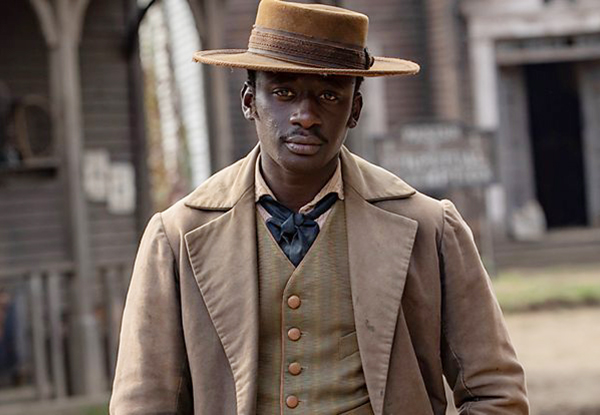 The more controversial addition here is probably the creation of a new character Abigail Fix Fortescue (Leonie Benesch), a reporter who follows Fogg and becomes part of his journey around the world. Her surname is a reference to the Detective Fix who starts following Fogg halfway through the trip, although he’s never on Fogg’s side or part of the journey. Abigail is … not great IMO. The dialog she’s given tends to be too cliche “modern liberated woman” talk that doesn’t fit in with the period. That said, other characters sometimes point out that what she says is ridiculous, so it’s not entirely like she gets away with anachronistic feminism. 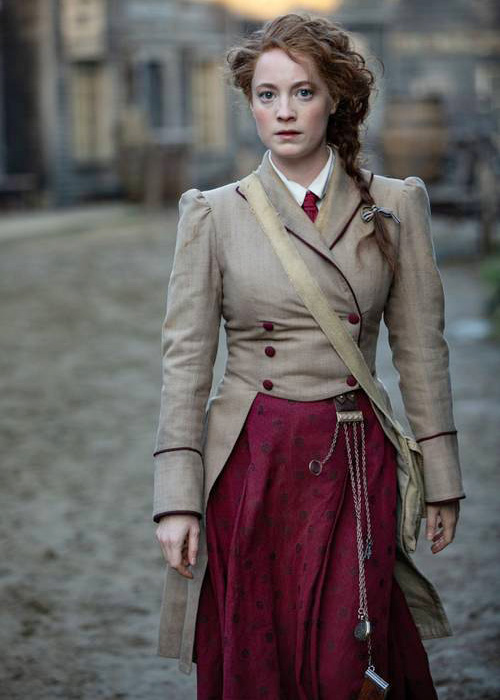 I don’t love this outfit. Everything about it is obviously done to be “adventurous” — skirt-like wide-leg pants, cutaway coat, half-up hairstyle. Compare with Anne Lister in Gentleman Jack (2019), who wears a more historically accurate long skirt & either a short jacket or a full coat, but walks fast, climbs fences, & does manual labor.

As for the costumes? Well, there’s not a lot to write home, or a blog post, about!  Abigail announces that the year is 1872, but she’s no fashion plate, and her clothes are a pared-down version of the period aesthetic. Fogg and Passepartout wear proper suits (Fogg even brings formalwear for dinner), but nothing flashy or particularly noteworthy. You can spot some bustle gowns in city crowd scenes. 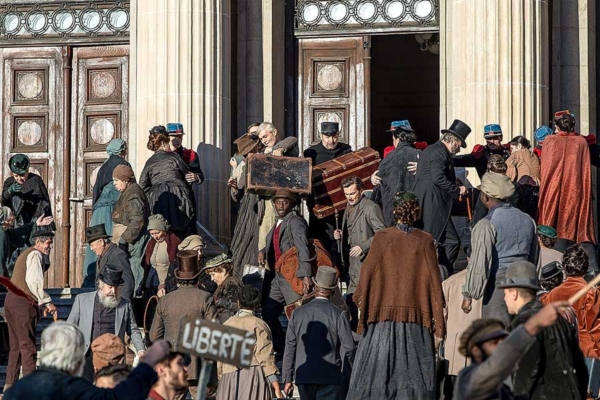 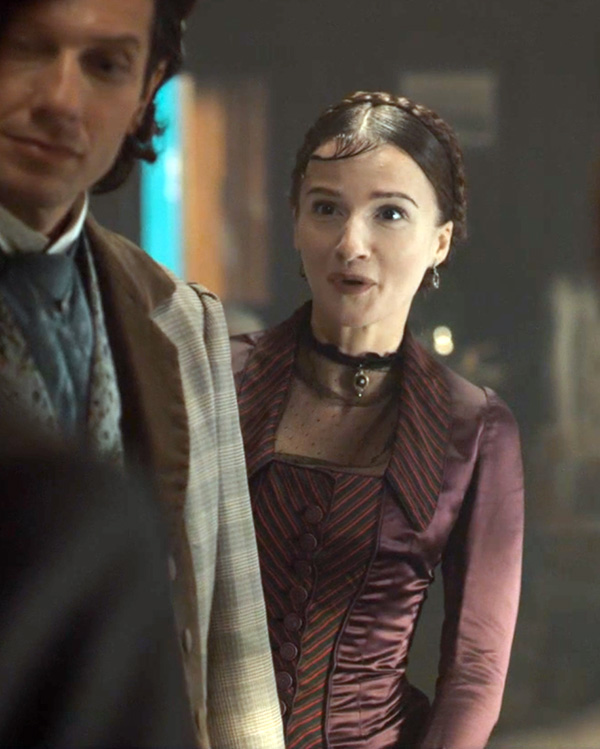 This Italian lady on the train has a great bustle gown — the bodice looks like Truly Victorian 405. But what’s up with the hair? 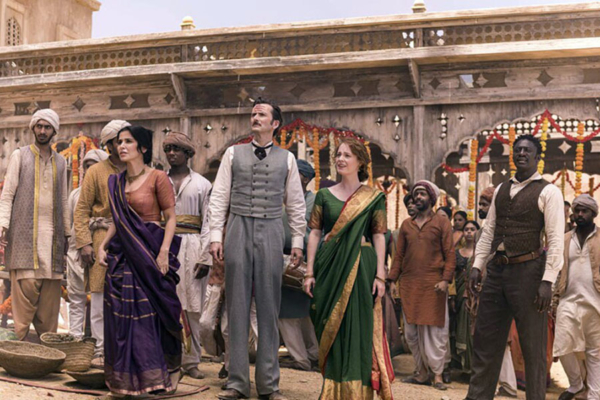 In India, Abigail wears a sari, & I hope there’s a decent explanation. 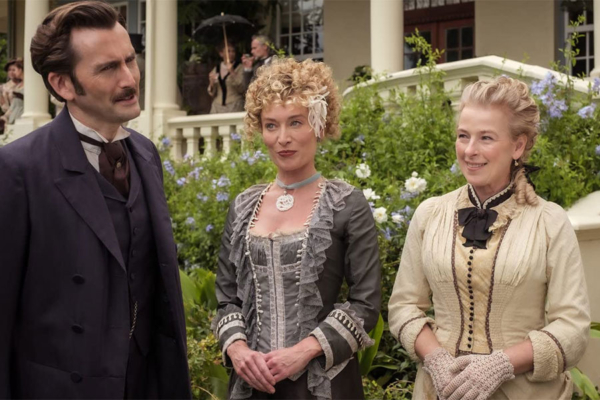 These women’s outfits are generally appropriate for the period, but the trim on Lady Clemency in the grey looks a little clunky to my eye.

Are you watching Around the World in 80 Days? What do you think so far?