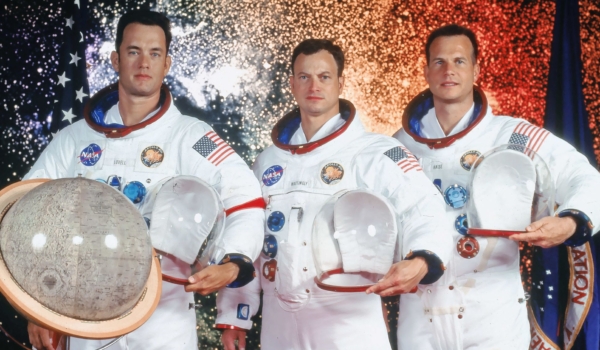 Last week I got a random desire to watch Apollo 13 (1995), and it wasn’t until a day or so later that I realized it was because I subconsciously remembered it was the anniversary of the Apollo 11 moon landing. Funny how that sometimes happens!

Anyway, I hadn’t watched Apollo 13 in years, so I decided it was a good time to revisit it with the distance of time and a more evolved sense of historical costuming for the late 1960s (yeah, yeah, the bulk of the action takes place in 1970, but just go with me here). One of the things I have always really appreciated about this film is that, steeped as it is in “HOORAY AMERICA” nostalgia, the story of the Apollo 13 mission is really one of success despite massive failure. Something about that always appealed to me. Also, the sets and costumes are fantastic, which is what we are really here to talk about.

Of course, one of the hardest things about this era of clothing is that, unless you’re dealing with fashion designers or rock stars, the menswear is pretty boring. Doubly so if you’re dealing with men in the military or government (check, and check), so the most interesting costumes in this movie ended up being worn by the female characters, such as Marilyn Lovell (played by Kathleen Quinlan), with a few other notable exceptions here and there. 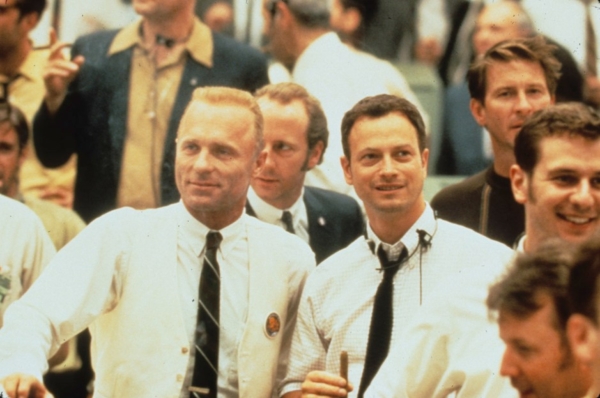 While the costumes were designed by Rita Ryack (probably best known to historical film aficionados as the designer for the 2007 remake of Hairspray), the film utilizes a good number of vintage garments loaned by vintage clothing collector Doris Raymond, including Marilyn Lovell’s amazing pink dress that she wears for the Apollo 11 launch party she and her astronaut husband, Jim, are hosting. I am absolutely obsessed with this dress, btw.

That macramé work on the front, culminating in long beaded tassels is just *chef’s kiss* 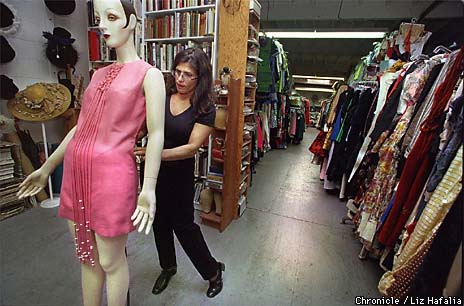 A photo from a 1999 article in the San Francisco Chronicle, showing vintage clothing collector Doris Raymond and the 1971 pink linen dress she loaned out for the film. The article notes that Raymond will often loan out a range of costumes from a few years before the set date of the film, to a year or so after, to account for the fact that most people will continue to wear clothes that are several years old. Sounds obvious when you think about it, but sometimes historical films get really bogged down by limiting their wardrobes to only the most fashionable clothing of that time.

Barbara, the eldest Lovell child, gets a number of cute outfits. This one was one of my favorites. I’m not sure if it’s actually a Gunne Sax dress, or simply one of several other similar prairie-style outfits that were popular at the time, but I love it.

You can see Barbara’s dress is ankle length in this shot. Also, note the amazing green, brown, and dark olive striped shirt on the guy on the right… 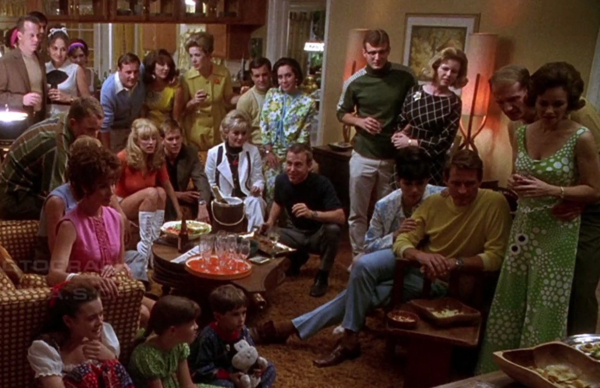 I. LOVE. THAT. GREEN. JUMPSUIT. Also, note the white go-go boots on Swigert’s girlfriend, and that white pantsuit. All of this is good, very good.

Speaking of white suits. Marilyn shows up to the launch of Apollo 13 wearing this fabulous white linen suit jacket with contrasting red edging.

Mary Haise, wife of Apollo 13 astronaut Fred Haise, coordinates her family in primarily red with pops of white and blue in this pre-launch meeting with the astronauts. It was not easy being an astronaut’s wife.

It also wasn’t easy being an astronaut’s kid. Barbara Lovell is seen throughout the film as a rebellious young teenager, but adolescence coupled with the high stakes of her father’s job, as well as the constant press intrusions, had to be really hard. Here she is wearing another cute outfit, picked out by her mother so she would look presentable during their publicized tour of Mission Control. I tried to find better images of it, but this was as good as I could get.

I really liked this white dress with black bow and belt worn by Mary Haise in this scene. The use of white on the wives and children stood out to me while I watched the film this time around. As you can see, it’s a color choice that’s repeated several times that draws the attention to the astronauts’ family members amid more somber earthy colors for the astronauts.

Finally, I wanted to conclude this post with a few pictures of the real astronauts and their family members. I think it’s interesting to compare these photos with the costumes used in the film (which at that point was released only 25 years after the actual Apollo 13 mission, so the late-1960s/early-1970s aesthetic was still pretty fresh in many people’s minds). 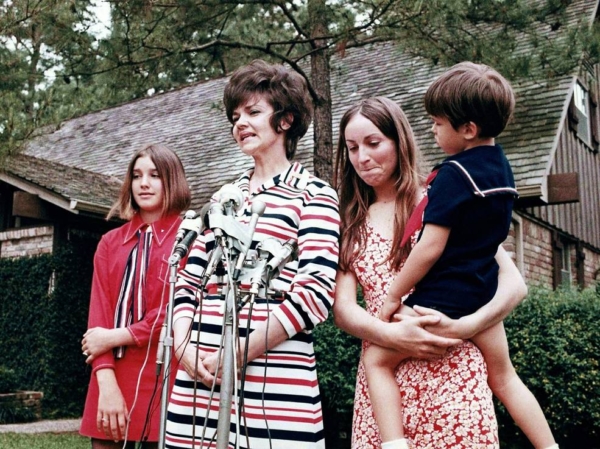 Marilyn Lovell addresses the press with her children after the successful splashdown of Apollo 13. I love her dress. Also, again, note that the red, white, and blue theme that is repeated throughout the film is present here as well. 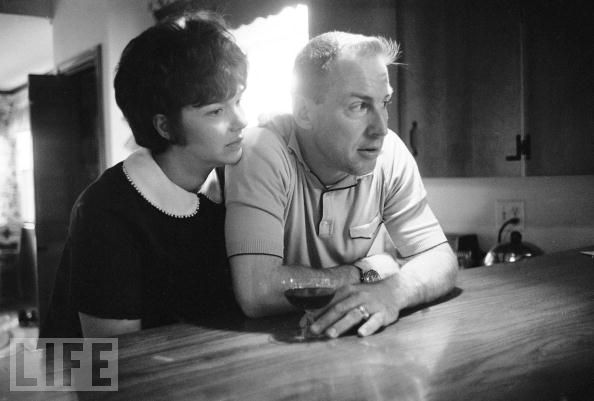 Marilyn and Jim Lovell, photographed in April 1970 for LIFE Magazine, after Apollo 13 retuned safely. You definitely earned that cocktail, Jim. 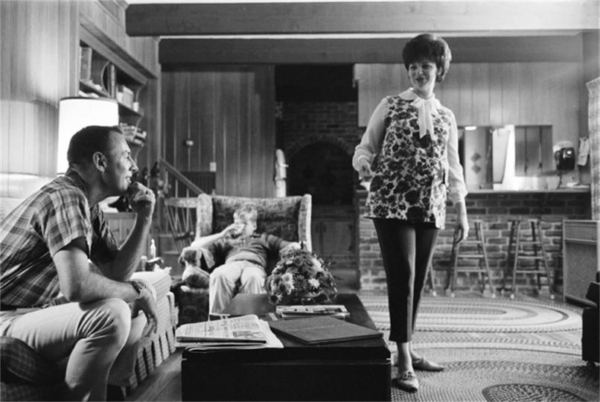 An interior shot from the same LIFE Magazine series. Comparing this photo to the set used for the Lovell’s living room in the film, they got it pretty close, don’t you think? 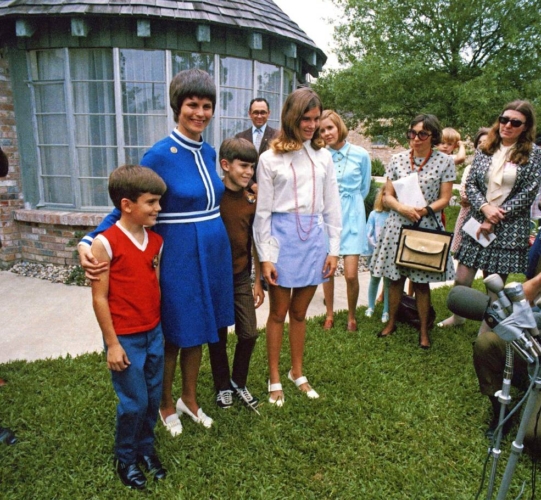 Mary Haise and her children, addressing the press after Apollo 13 safely returned. Again, there’s that intentional red, white, and blue color scheme. The “astrowives” as they were known, did have their clothing dictated to them by NASA for official photographs, even having colors assigned to them.

What did you think of Apollo 13? Tell us about it in the comments!