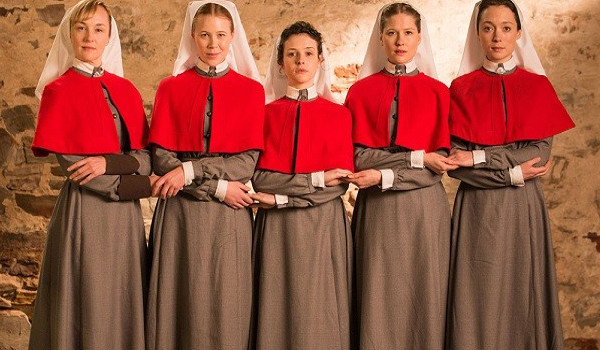 When I reviewed The Crimson Field (2014), commenters mentioned ANZAC Girls (2014) for comparison. I’d heard of the show but despaired of this Australian production making it to PBS or a streaming service where I could easily watch it. And then, randomly, I found it on my local PBS channel, playing at a non-primetime slot — folks, this is why you set your TiVO or other DVR to search for you in the background! 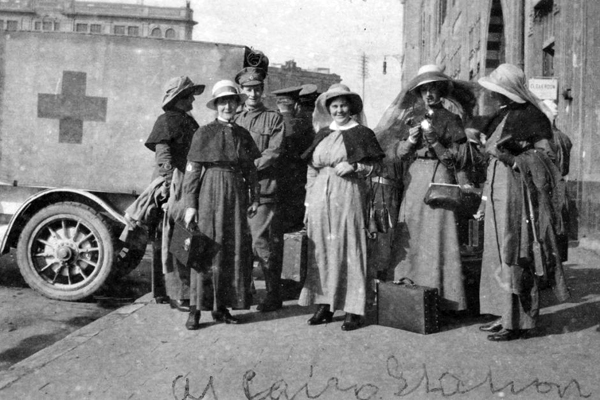 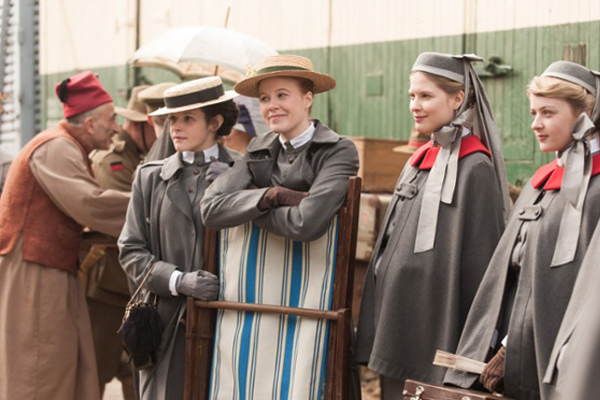 Fresh off the train at Cairo.

Anyway, I’ve had a chance to watch the six-part miniseries, and in general, I liked it even better than Crimson Field. First, the story of Australia’s and New Zealand’s World War I nurses is entirely unknown in the U.S., so it’s fantastic that this historical drama was made and is available. This also gives viewers a look at World War I events that are infrequently covered by filmed drama, such as the disastrous Gallipoli campaign and its ramifications. I found that the social and personal costs of this war were more thoroughly explored in ANZAC Girls than in Crimson Field as well — maybe because Australia’s and New Zealand’s involvement in World War I had different motivations than that of Britain. 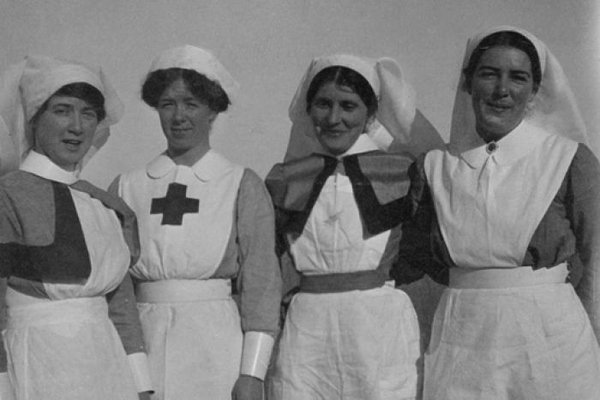 Historical photo of nurses in Alexandria, Egypt, in 1916.

The series follows four nurses (titled “sister” in that nun-like way that nursing was done in the period) and their leader (titled “matron”). Several of the characters are based on real women, whose diaries and letters were used in the book The Other ANAZACs by Peter Rees, upon which this TV series is loosely based. Co-producer and writer of ANZAC Girls Felicity Packard told ABC News Australia: “We wanted a range of interesting stories for the series and the choice really was dictated by their diaries. These are real people and real events. These things really did happen.” 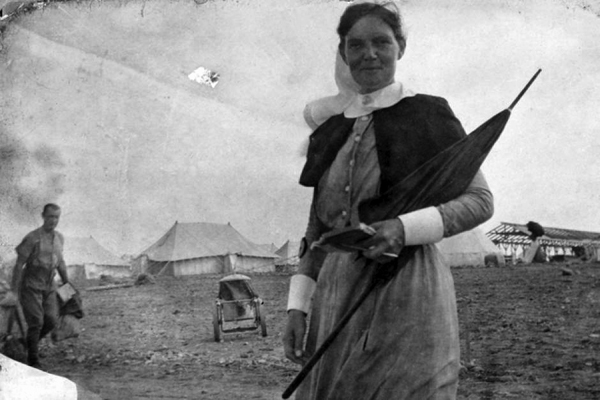 Historical photo of Matron Matron Grace Wilson on Lemnos, May 1915. 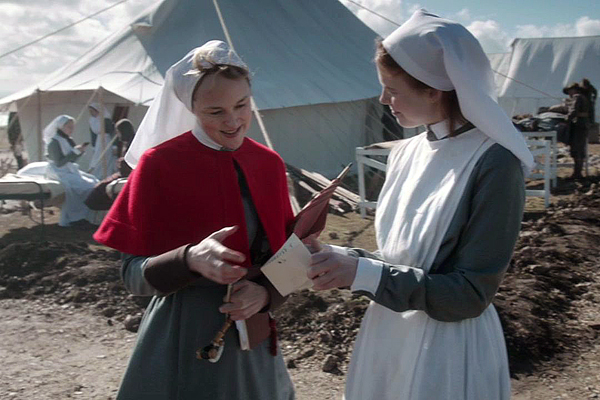 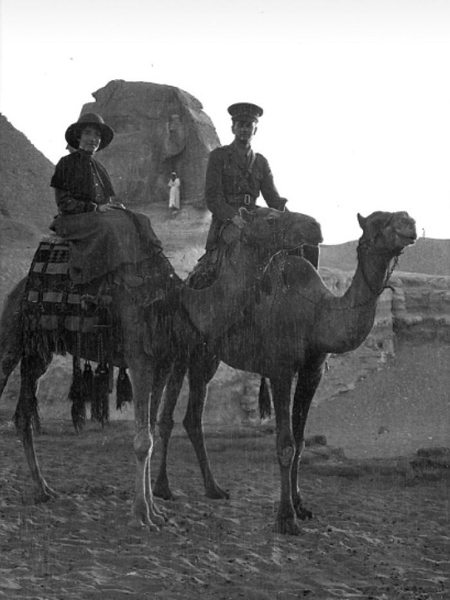 Of the main five female characters, three are specific historical women. Matron Grace Wilson (played by Caroline Craig) was a real nurse who achieved high rank through her exemplary service in both WWI and WWII. Sister Alice Ross-King (played by Georgia Flood) was indeed engaged to Lieutenant Harry Moffitt (played by Dustin Clare), and Ross-King later served in WWII, receiving the coveted Florence Nightingale Award. Sister Olive Haynes (played by Anna McGahan) did serve at the outpost hospital on the Greek island of  Lemnos, where she met Private Pat Dooley (played by Brandon McClelland). McGahan said it was “an incredible honour” to play Olive Haynes in the series, explaining in The Daily Telegraph: “It was a really powerful experience actually. We were all very emotionally affected by the stories and our characters.” 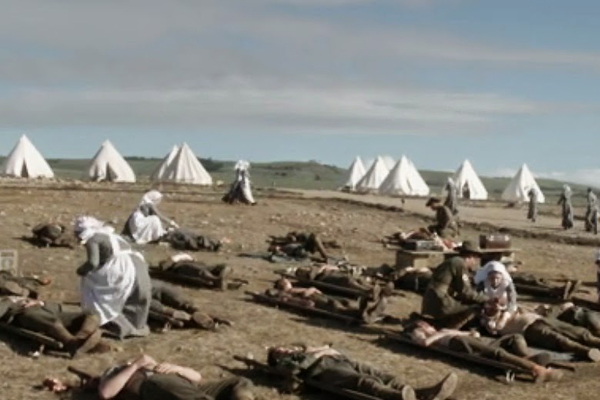 The ‘hospital’ at Lemnos. 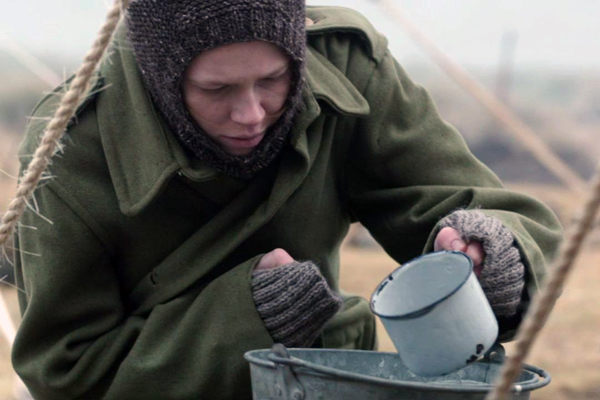 The women deal with first dysentery, then freezing cold on Lemnos, plus limited supplies for treating the wounded. 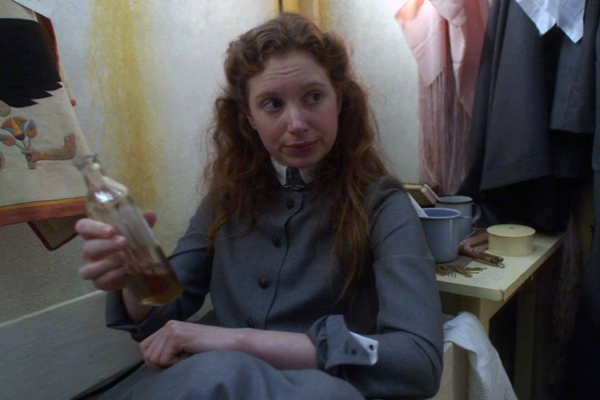 Conditions on the hospital ship drive one woman to drink. 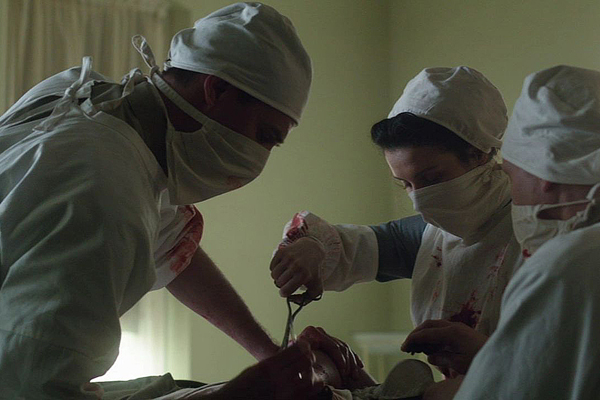 It’s hard to avoid blood & guts in this series.

While usually I’d talk about the costumes in ANZAC Girls, being a war story on the front, costume variety is lacking. The nurses wear long grey dresses with white aprons and caps, plus scarlet capelets. The men are in military uniforms, plus a whole lot of bloody bandages. Oh yes, this series is far more explicit about the wounds and misery of war than Crimson Field. It’s less MASH the TV show and more like MASH the movie when it comes to the hospital scenes (which there are many more of than in Crimson Field; another thing that makes it less soapy overall). In addition to showing men screaming in agony on the battlefield as nurses try to help, we even see how sexually transmitted infections were treated in the period (ouchie). The only time we see some non-uniform, non-blood-spattered costumes is in the rare moments that the nurses have some downtime for sightseeing and flirting with the fellas. They’re shown in some quite lovely 1910s gowns in light colors, very appropriate for hot conditions in Egypt. 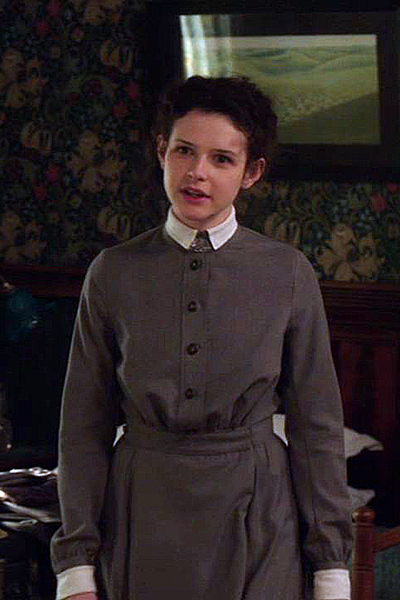 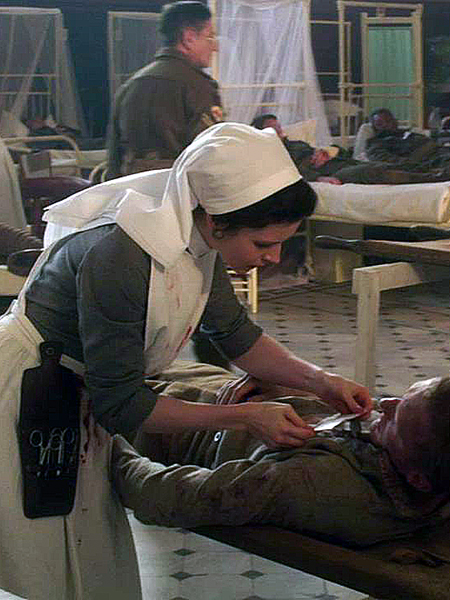 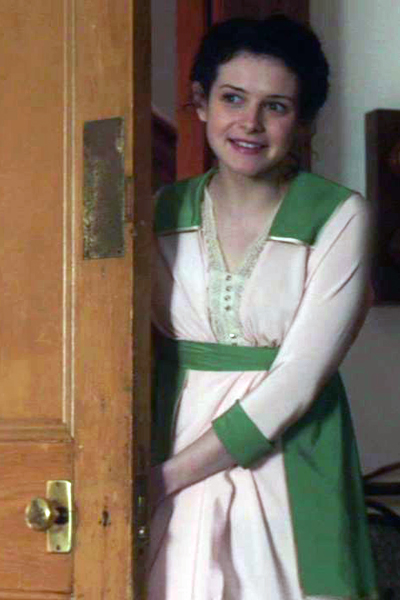 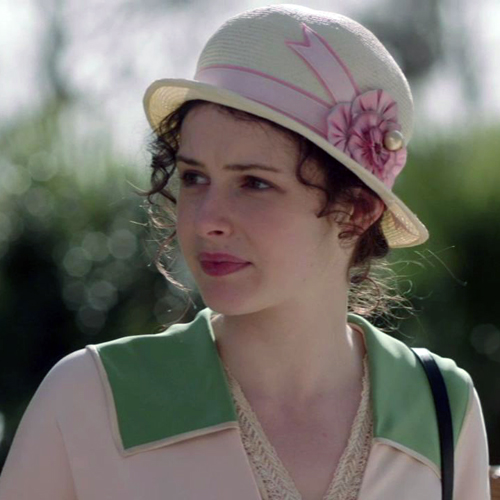 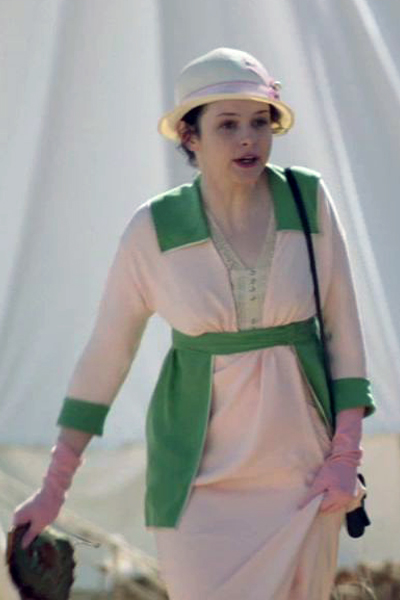 Alice out to tour the pyramids. 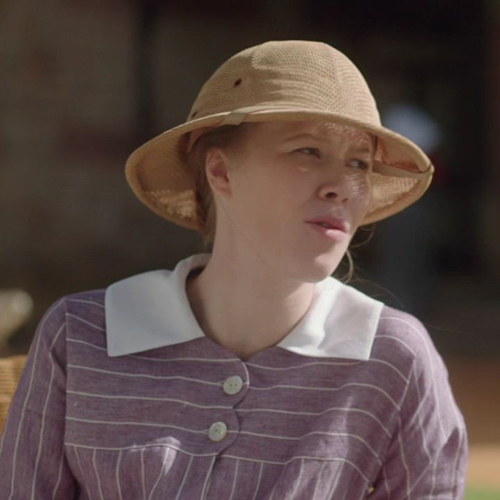 Sister Olive is the spunky one. 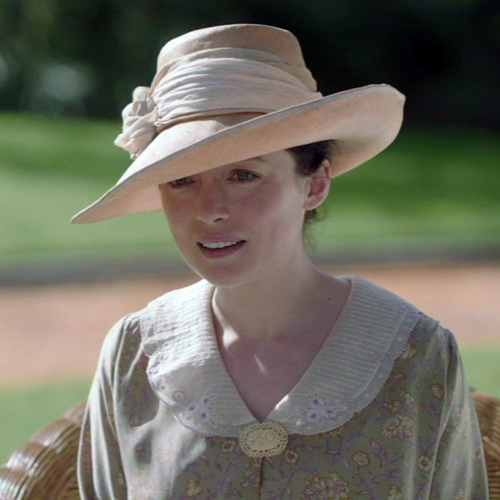 Sister Hilda is the innocent, religious one. 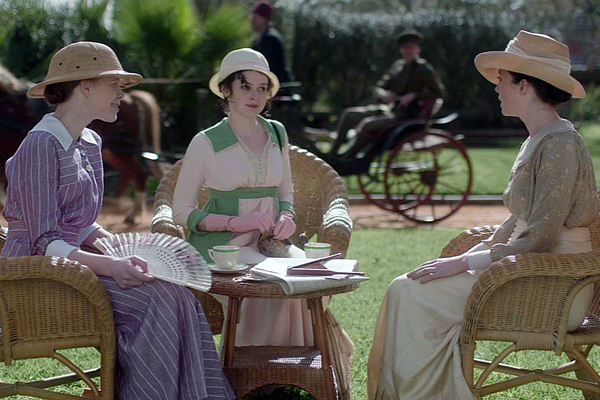 Three of the sisters on a day off in Cairo.

So no, this isn’t a lush period piece with gorgeous historical costumes. But it is a well-told, thoughtful, and entertaining miniseries about women in World War I, with the bonus of focusing on Australia’s and New Zealand’s efforts during WWI. With the emphasis on telling real, historical women’s stories, ANZAC Girls avoids becoming solely about romances and cliffhangers and mostly just tells about the complications of women serving at war. 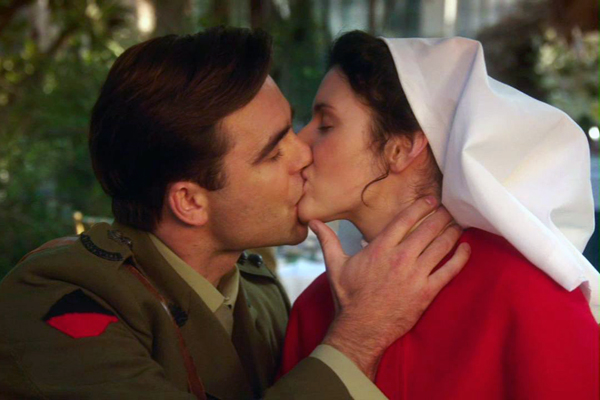 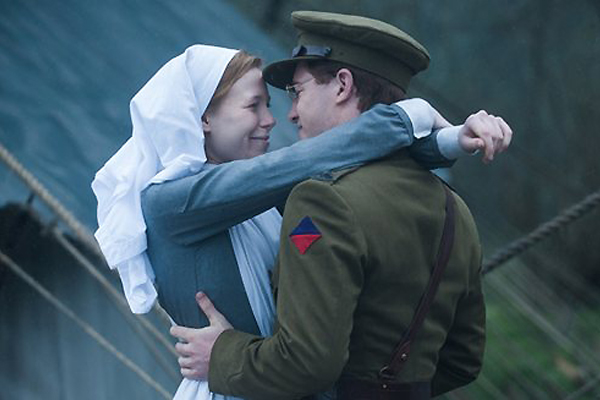 Have you seen ANZAC Girls? How do you think it compares to other World War I dramas?