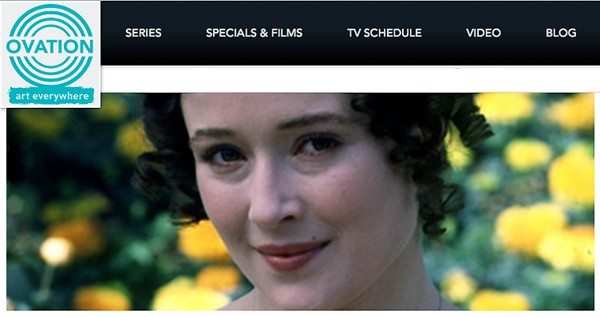 I understand that a lot of kids today don’t actually have “television” — meaning, they don’t have cable, they don’t use a TV antenna, they don’t watch anything broadcast by a TV network at any scheduled time. I’ve heard that they’re all streaming movies from Netflix, catching up with programs on Hulu, watching stuff via Roku, and subscribing to YouTube channels.

But I’m old school, and I still haven’t cut the TV cord. While I enjoy Netflix, my deep and meaningful relationship with my TiVo DVR helps me find all kinds of stuff via the billion cable channels (basic and premium) that we pay for in my household. Thus, a few years ago, I was pleased to discover the Ovation Network on basic cable.  Relaunched in 2007, this channel states its mission as ‘to inspire the world through all forms of art and artistic expression.’

The programming on Ovation harkens backs to the old days of the A&E Network when that actually stood for “Arts and Entertainment.” Let’s not forget that the network that co-produced the Pride and Prejudice introducing Colin Firth to the world has now devolved into Duck Dynasty. So it’s been nice to see a new arts-focused channel in the cable lineup.

Ovation has a few original shows about arts this and that, but of interest to Frock Flicks are the historical costume TV series it has in the schedule. This channel has been the main U.S. distributor for A Young Doctor’s Notebook, set in the 1910s and starring Daniel “Harry Potter” Radcliffe; as well as The Artful Detective (originally titled Murdoch Mysteries in Canada, where the series originates), a murder-mystery show set in the 1890s.

But when so many historical costume movies and TV series over five years old aren’t available for streaming (or aren’t on the service I have or worst of all, are only available on DVD), I’m happy to find a few of these anywhere. Ovation is helping keep the shows and movies in the public eye, even if less than half of American homes have access to the network right now. Hopefully, this channel will stick around for a while and won’t turn into yet another pit of reality train-wreck despair.

Where do you get your historical costume movie fix on TV? Do you have cable, streaming, or something else?