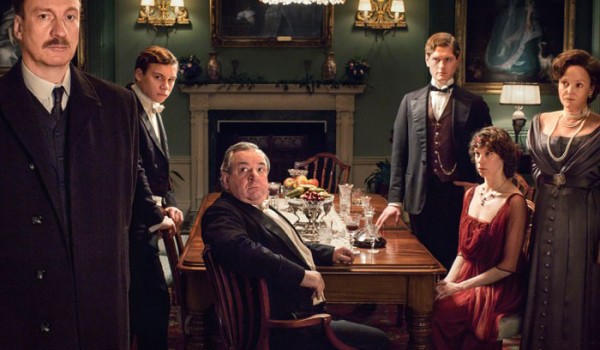 An Inspector Calls is a one-episode BBC TV movie based on a 1945 play. It aired recently in the UK, and hopefully will make its way over to our side of the pond! This version (there’s been a 1954 feature film, and various TV adaptations) stars David Thewlis and Miranda Richardson.

The basic set-up is this: in 1912, a rich family is having a dinner to celebrate their daughter’s engagement. Mid-dinner, a mysterious police inspector (Thewlis) shows up and starts interrogating the family about the suicide of a girl. As the story unfolds, you find out that each family member (and the daughter’s fiancé) have a connection to the girl. I don’t want to give away any more of the plot, so I’ll just say that A) it is very play-esque in that everything (minus flashbacks) happens in that one home, on that one evening, and B) there are a lot of strong performances. The story is all about trying to get both the characters and the audience to question class distinctions, and is very much in that vein of “impending upper-class doom given that World War I is around the corner.”

The costumes were designed by Amy Roberts (Upstairs Downstairs [2010-12], Wuthering Heights [2009], The Virgin Queen [2005], Cold Comfort Farm [1995], and many more). She was in luck in that since the story takes place over one evening, each character had one featured costume — although there were a few other outfits worn in flashbacks.

In general, I thought they did a great job of keeping the costumes to 1912 exactly with one exception: 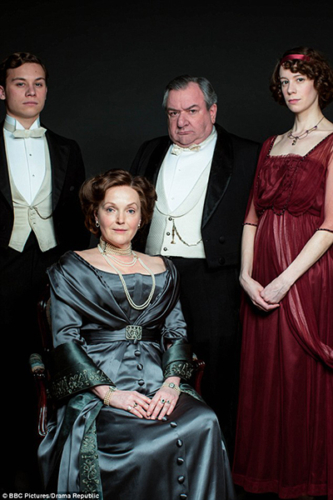 David Thewlis as the inspector was all dark suit, bowler hat, stiff collar: 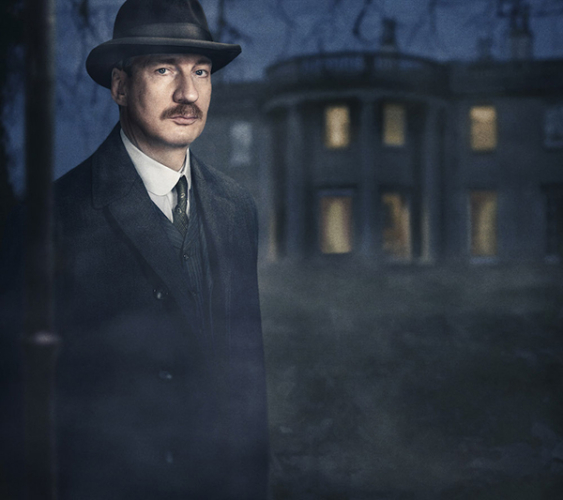 Arthur and Sybil Birling are the patriarch and matriarch of the family. They’re ALL ABOUT being as stiff and buttoned-up as humanly possible, which is reflected in their clothing: 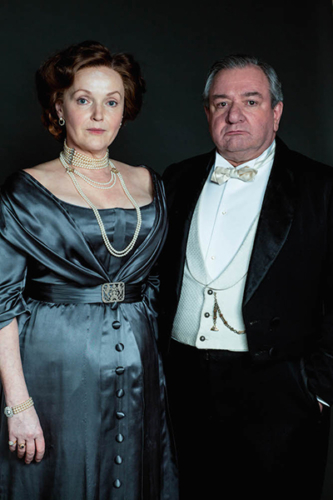 He’s got the cardboard shirt front and everything else that makes white tie fabulous. This pewter number on Miranda Richardson is nice, and you can sense the armor of her corset underneath, which informs her character. Love the dog collar and long pearls – SO Edwardian | (C) BBC/Drama Republic – Photographer: Laurence Cendrowicz 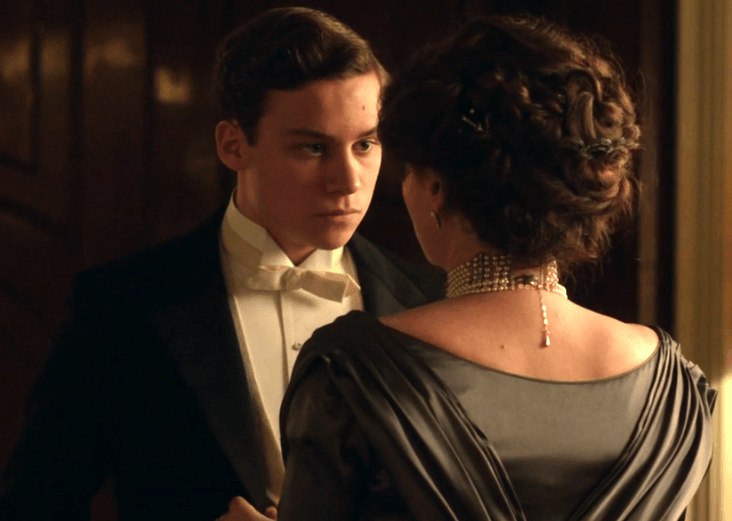 The back of Sybil’s dress. I like that the drape continues on the back, and that there’s no sign of closure in the center back, which is as it should be — 1910s dresses generally closed in a really interesting way that combined front and/or side closures. Also, great hair.

I found promo images of this dress, which is SO 1912 — love the layers, soutache, and buttons — but I don’t recognize it from the show. My theory is that it’s what’s worn under the coat seen on screen (what a waste!). 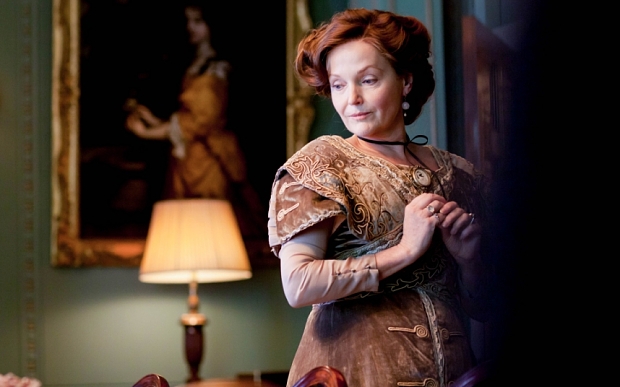 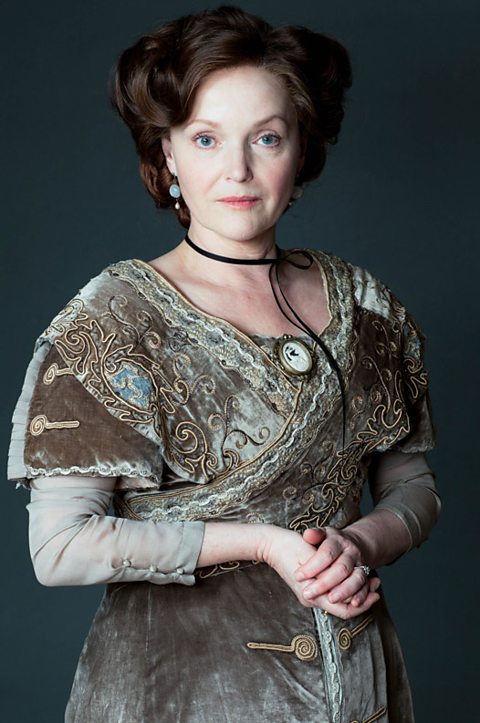 I mean, check this OUT! 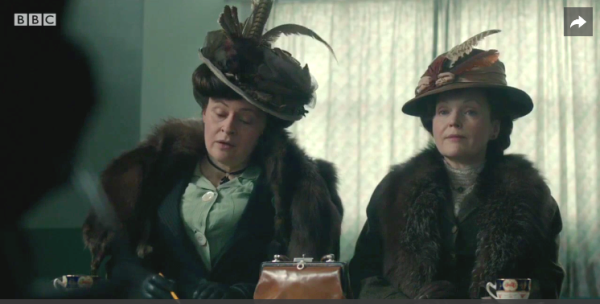 Is it what’s hiding under this fur coat? 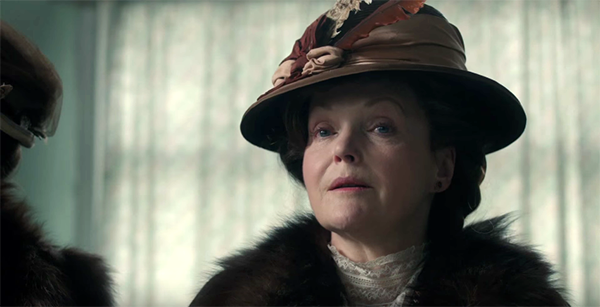 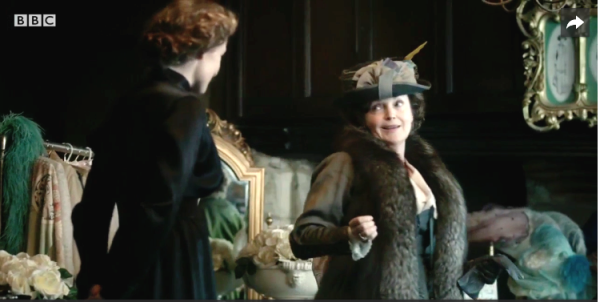 Another great fur-and-hat look, while shopping.

Their engaged daughter Sheila wears dark red, an interesting choice for an unmarried lady, but it’s really beautiful — and captures my favorite thing about 1910s costume: the layering. 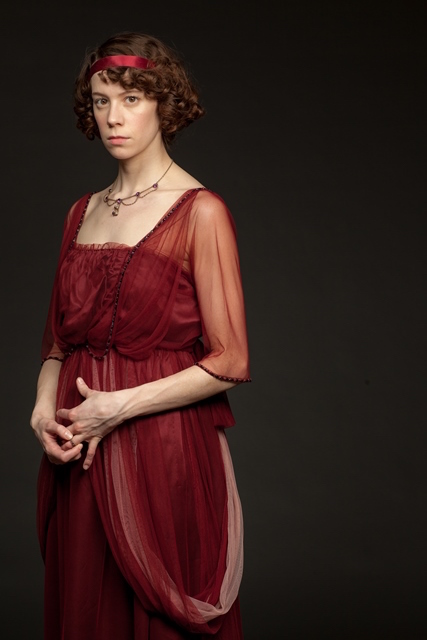 Sheila in a sheer net layered over a fitted bodice; LOVE the two colors in the hip drape. This is spot-on for 1912 | (C) BBC/Drama Republic – Photographer: Laurence Cendrowicz 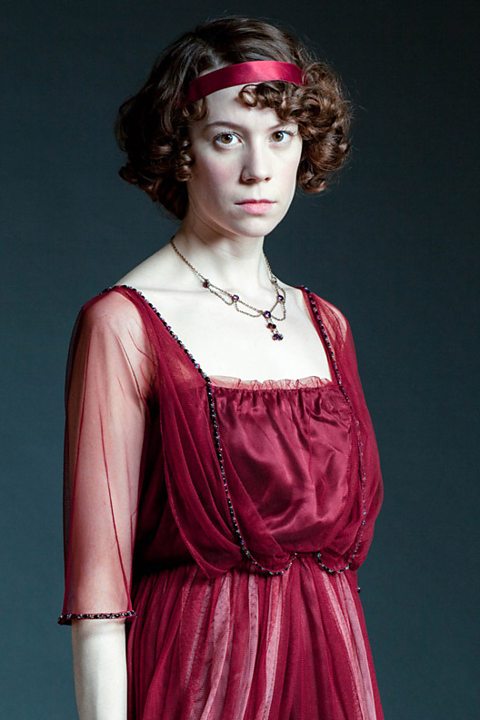 Love the tiny beading along the edge of the bodice drape and sleeve hem.

In her flashback, she goes shopping with her mother: 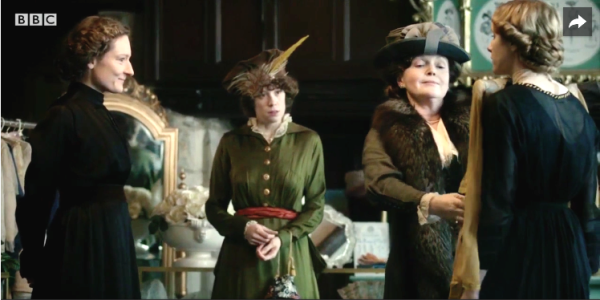 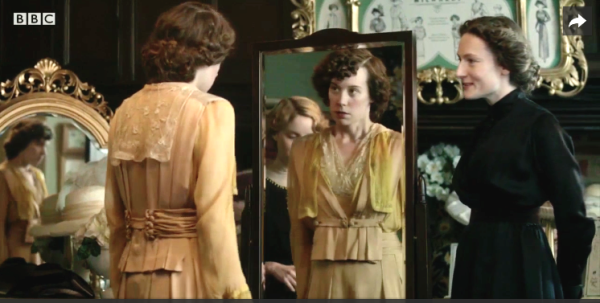 And she tries on this yellow dress, which has nice layering and a great sailor collar. 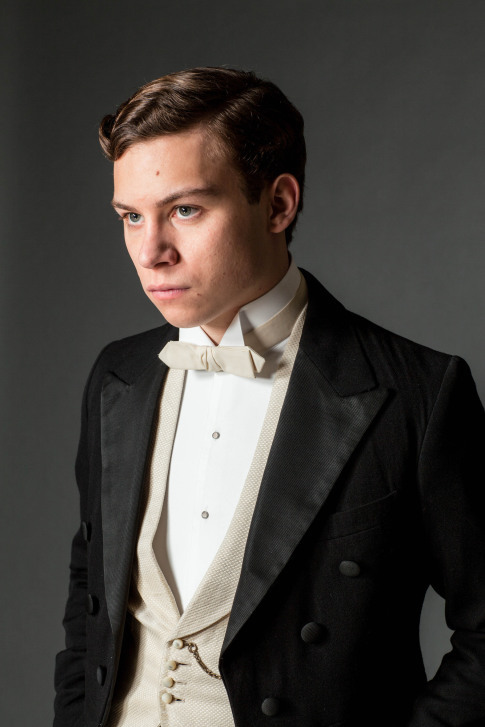 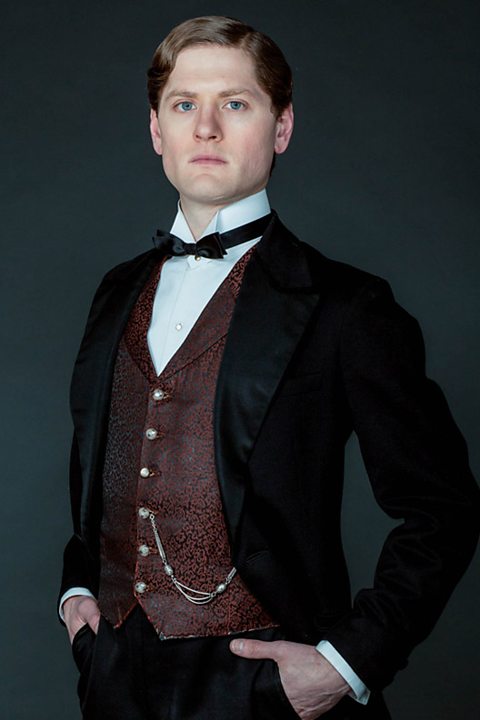 Black tie — would that be done, given that the other guys are in white tie? Note how the red in his waistcoat ties in with Sheila’s red dress.

Eva is the girl who (maybe) commits suicide. She’s poor and works in a factory, so this is her main look: 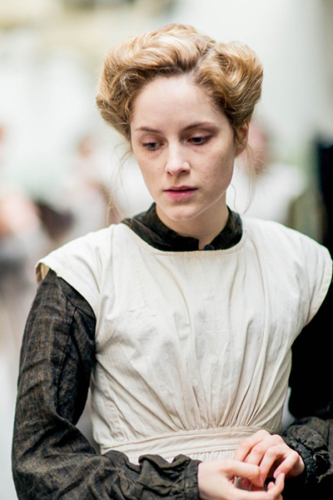 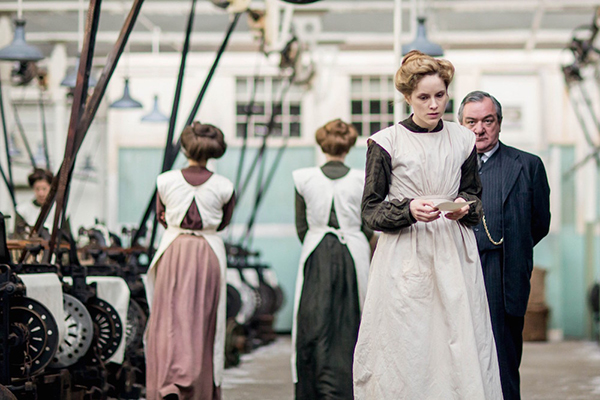 With some of her fellow factory workers. Hey, look at all those hairpins! Interesting that the factory workers are wearing slightly dated (compare to Sheila) hairstyles — not sure if I buy that, as working women were known for trying to be as up-to-date, fashion-wise, as possible | (C) BBC/Drama Republic – Photographer: Laurence Cendrowicz 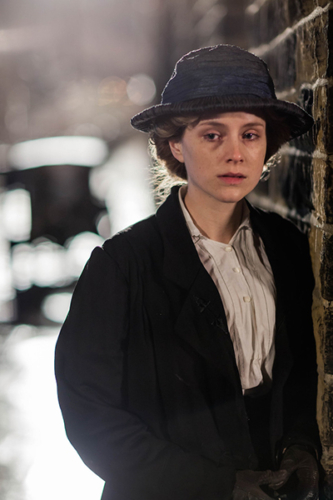 But some of her other looks are an improvement: 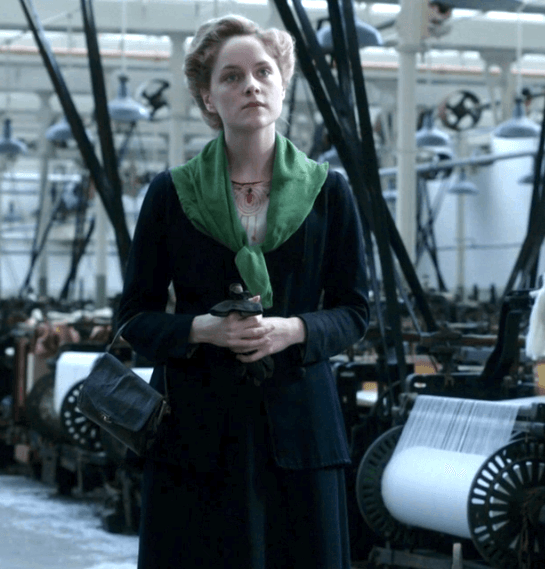 The green scarf elevates this outfit a bit. 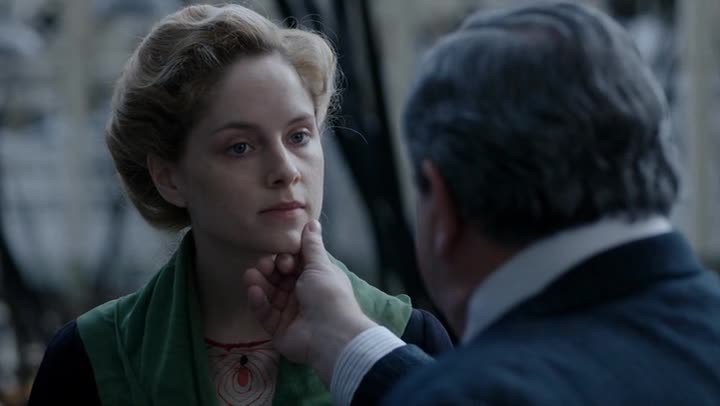 But the neckline detail totally looked like a spider to me. Weird. 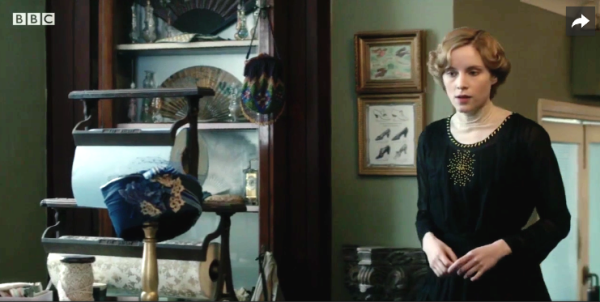 Nice beading on this otherwise-plain dress.

At one point in the flashbacks, Eva gets to dress up. I thought this was a really interesting (in a good way) color choice to put on a blonde: 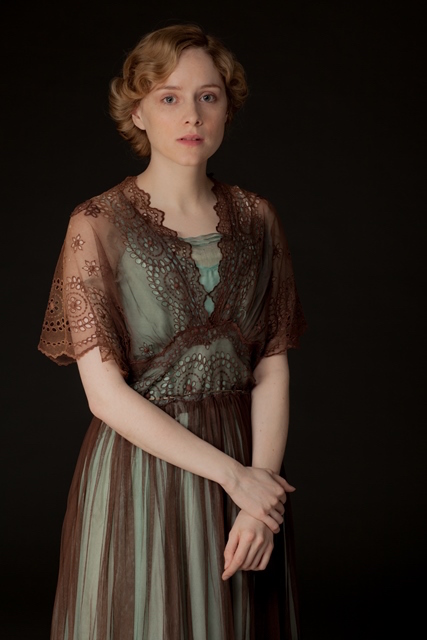 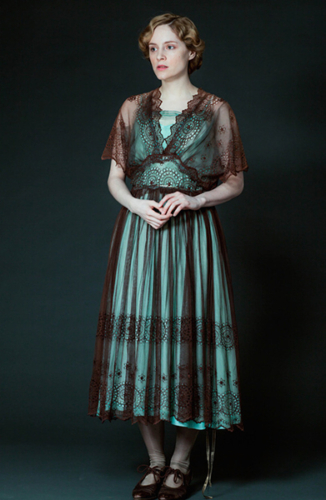 Overall, I’d give the whole thing a solid A — the story is very interesting, the acting is great, and the costumes are 99% perfect. We’ll let you know when this airs Stateside!

Have you seen An Inspector Calls yet?