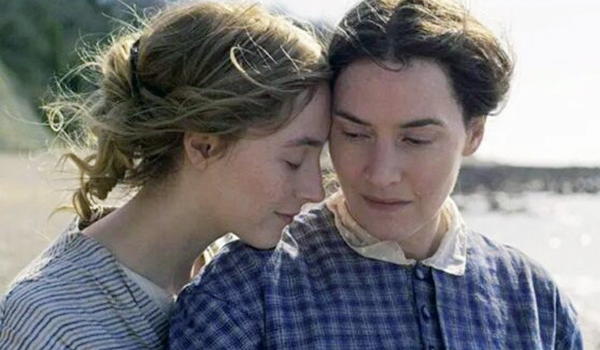 Before I give any review of Ammonite (2020), I have to rant a tiny bit about film in the time of corona and especially indie films (as opposed to big blockbuster flicks). Smaller film distributors, in particular, need to be more nimble this year and release their movies on all possible online streaming platforms available for rent, dammit! Because the small art-house theaters have had to close, so “limited theatrical release” is bullshit this year. What some films — like this one — have done is supplement their theatrical release with “premium video on-demand.” This is video streaming for, say, 48-hours only accessible through a provider like AT&T, Comcast, or DirectTV. It can cost the viewer anywhere from $10 to $20. Ammonite premiered in limited theaters November 13, 2020, while COVID-19 was running rampant in the U.S., and then on PVOD starting December 2, 2020, for $20 for 48 hours.

Even if the movie had been playing nearby, I wouldn’t have risked going into a theater to see it, so I’m stuck with the $20 viewing. Which, OK, it could be worse, but FFS, being on-demand means I can’t take screencaps, so it’s far less useful from a Frock Flicks perspective! That’s my long way round of telling ya’ll there’s not much I can show you about the costumes. Though at least this isn’t a shiny costume-heavy flick anyways. Just there were some details I’d have wanted to capture, hmph.

Two things that could sum up Ammonite:

While, OK, the costuming wasn’t much to talk about (I will, in a minute) the visuals are quite well suited to TV at home and don’t suffer from not being on a big screen. This is a small, tightly wound story about two women in love, without extensive dialog. There are worse ways to spend two hours.

The cinematography, at times, makes a not-so-subtle point about this being a man’s world full of men who run things from a man’s point of view. That’s the background that underlies the film and the relationship of these two women. One of them, Mary Anning, has created a life for herself without men and outside of their world. She finds and studies fossils in the small town of Lyme Regis in West Dorset, England (where much of the movie was filmed on location). The other woman, Charlotte Murchison, is so much reactive to the world of men — she’s “melancholic” because of a possible miscarriage, and her husband says it’s ‘not a good time’ to ‘make another baby’ when she tries to snuggle up in bed. Then her husband fobs her off on Mary so he can go do archaeology things on the continent. Later, Charlotte is able to suggest Mary live in their house because her husband would love having Mary as a ‘pet’ fossil hunter and he doesn’t need to know they’re boning. All of Charlotte’s actions are reactions to men, while Mary persists in her independence of the opposite sex. This doesn’t feel like anachronistic feminism to me because Charlotte is very much of her times. Mary is unusual, and that’s why her contributions have lasted, even if her name hasn’t been remembered.

This isn’t a biopic in any substantial way as the film gives only the roughest hints about Mary Anning’s life. That she discovered several important fossils, which added to scientific understanding of evolution and extinction, is noted. But more important to this movie is the fictionalized relationship between Mary and Charlotte, and, of course, there’s been some controversy about it. Director Francis Lee said:

“Given a historical figure where there is no evidence whatsoever of a heterosexual relationship, is it not permissible to view that person within another context…?”

And that’s a good way to question the assumed heteronormative nature of all people and history. Since there’s no surviving letters or material saying she had sex with a man, why does Mary Anning have to be straight? Why can’t she be queer? She did have significant female friendships, including with a young visitor to Lyme Regis, Francis Bell, and fellow fossil collectors, the Philpot sisters. The movie does include Elizabeth Philpot, and onscreen, their connection is hinted at being quite deep so probably a previous romantic relationship. Historically, Philpot was almost 20 years older than Anning and acted as a science mentor. Coincidentally, Kate Winslet, who plays Anning, is almost 20 years older than Saoirse Ronan, who plays Murchison.

The bigger inaccuracy is about Charlotte Murchison in Ammonite. The historical Charlotte was more of a partner to her geologist husband, encouraging him to leave a military career for science, establishing her own impressive fossil collection, and drawing her own important landscape and geological sketches. She did have health problems later in life, but she traveled with her husband early in their marriage. In 1825, Murchison and Anning met and went fossil-hunting in Lyme Regis, Anning visited Murchison in London once, and they wrote to each other. And historically Murchison was 11 years older than Anning. It seems the real Charlotte Murchison comes off worse in this movie than Mary Anning — she wasn’t a sickly doormat just moping around for a good lay after all.

The costume designer is Michael O’Connor, best-known for both fancy costumes like The Duchess (2008), Miss Pettigrew Lives for a Day (2008), and Tulip Fever (2017), and subtle historical clothing like Jane Eyre (2011), Suite Française (2014), and Fanny Lye Deliver’d (2019). Obviously this falls at the latter end of that spectrum, but he still did a little press for the flick.

O’Connor explained in Variety that the director, Francis Lee, had a lot of very specific ideas about how the film should look, and that included the costumes. Lee wanted a limited color palette that reflected the landscape of Lyme Regis and told O’Connor:

“…no red and no yellow, red would only be used for moments of passion. I’d show him colors that I thought were brown and he’d say, ‘That’s red.’ We were quite restricted in a way, but he had an intention to keep it quite pared down, and that’s why there’s a lot of green.” 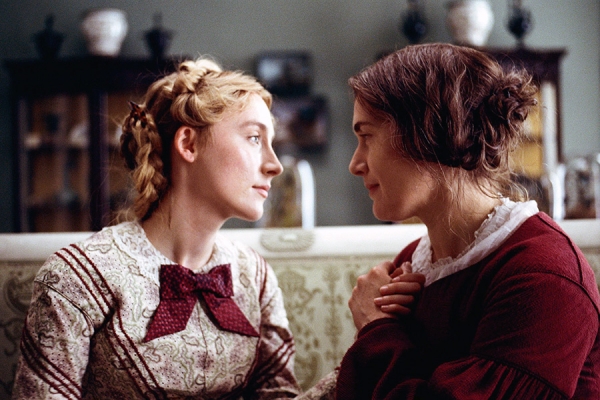 Only in the very last scene is there a little red.

But at least there’s some pattern. O’Connor continued:

“I was interested in prints of the time. There are beautiful prints from the Smithsonian. I wanted designs with sea elements so there’s a coral design.” 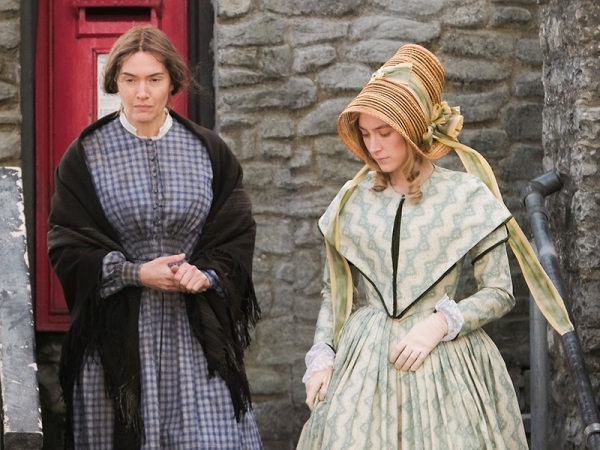 Mary in check, Charlotte in green wavy print. Sure, it’s something. 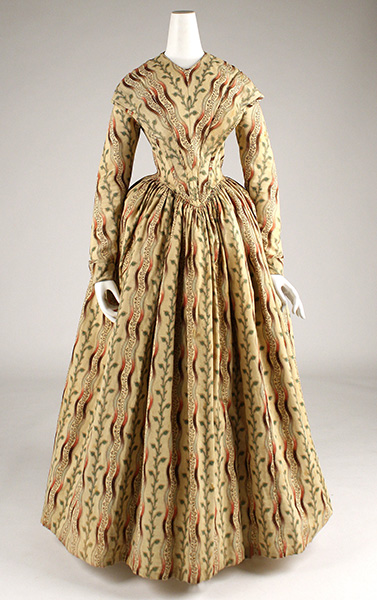 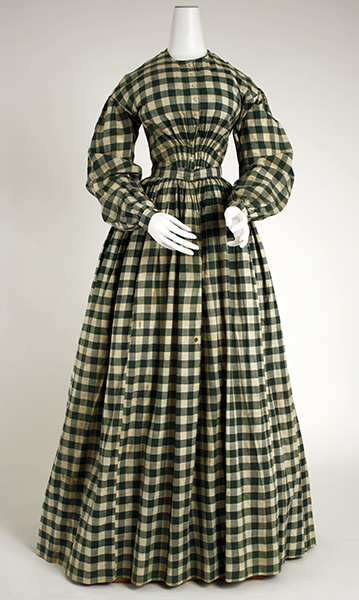 Mary Anning is supposed to be the serious, practical one. She mucks around in the tide pools and climbs grubby cliffs and stuff. So O’Conner gave her a bit of a masculine touch without being cliche:

“A lot of her costumes came about by thinking about each piece and saying, ‘That shirt belonged to her father and that was from one of the fishermen.’ The jacket that she wears for the beach is an old naval jacket with its back tails cut off. She also had to wear a skirt because it wasn’t feasible for her to wear just trousers under her gingham skirt which was typical of the time. It was very Mary Anning from the references I had of her, and I was always trying to bring the real Mary into the design.” 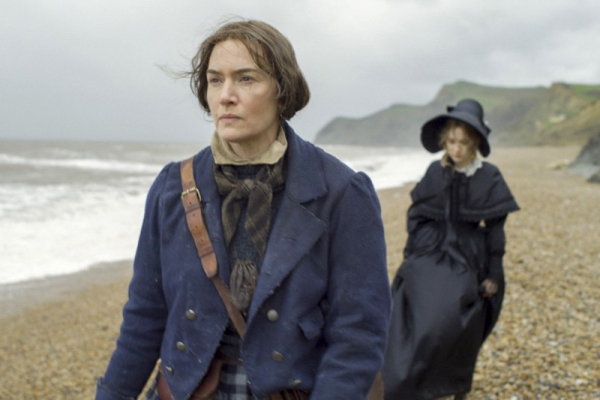 This must be that coat. 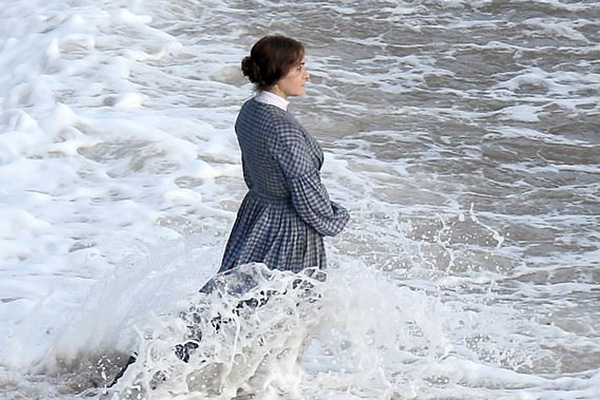 Standing in the waves, as you do. 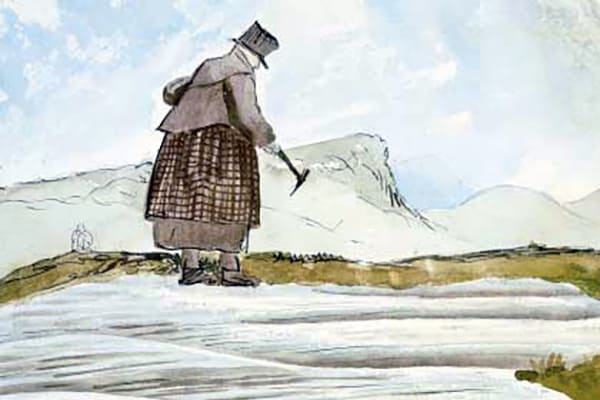 Charlotte Murchison got the more fashionable clothes, since she’s the visitor, she’s upper-class and wealthy. O’Conner used the same dress two ways in the film:

“You’d have a short-sleeved evening dress. She’s in mourning and I thought it would be great to start with a black dress and it could be her evening dress. Later we re-attached the sleeves to the very same dress and add a little cape and then it becomes a day dress. So, for two outfits, it’s one dress with a few extra bits.” 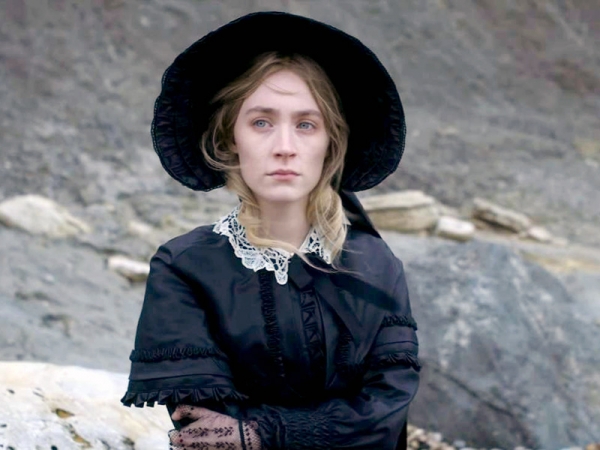 Charlotte is first shown in this full black outfit. 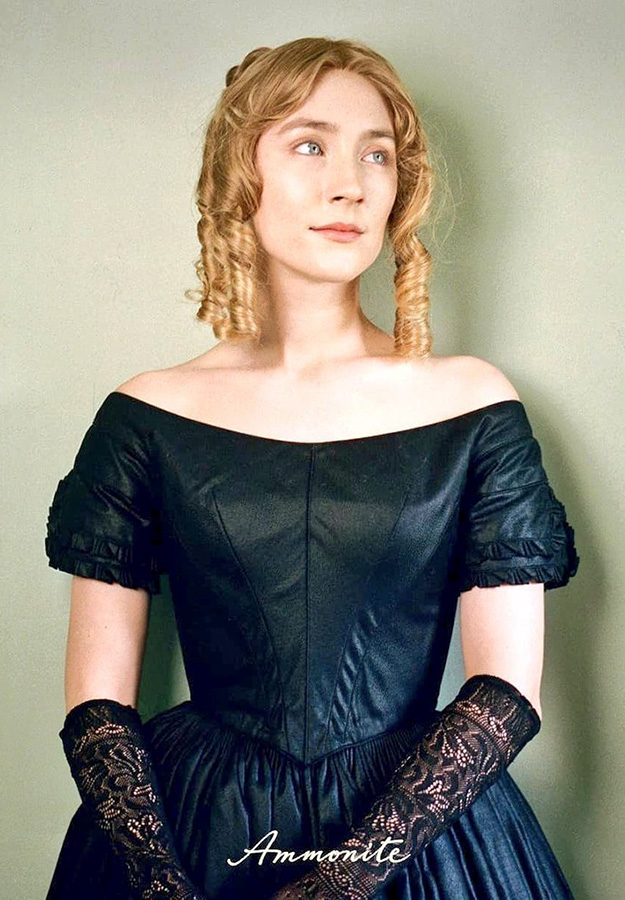 There’s two scenes where she dresses up, once for dinner & again for a recital. Same dress, just swap the sleeves & capelet.

One thing I have to note is that, for a movie set almost entirely at a very windy seaside, they did a great job of keeping all the women’s hair up! Only Charlotte really wore a bonnet, but both of them always had their hair up whatever they were doing. Charlotte even styled her hair in an appropriate 1840s fashion. OMG, it can be done! 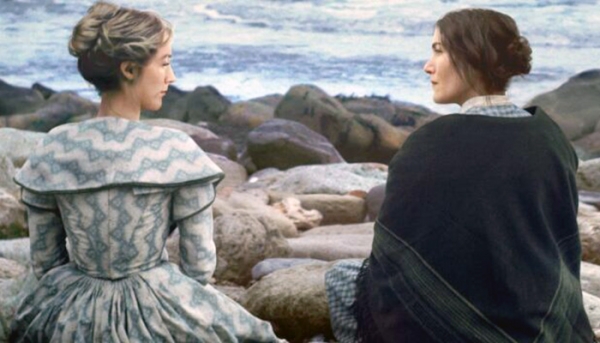 And during a couple dressing scenes and their sex scene (which is explicit and satisfying IMO), Charlotte’s corset is glimpsed. Just barely so I couldn’t tell details but I’m assuming because of the fit of her gowns that it’s reasonably appropriate for the period. Mary is shown not wearing a corset, which seems to make a point about her character that she’s cranky, anti-fashion, and just DGAF.

Will you be watching Ammonite on PVOD or waiting for wider distribution?