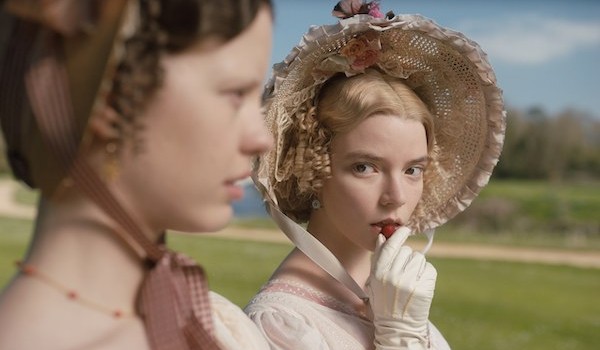 Apparently we need Yet Another One. Meryl Streep is Marmee; costumes this time by Jacqueline Durran.

The Voyage of Doctor Doolittle (Jan. 17)

Robert Downey Jr. stars as the man who can talk to animals; costumes by Jenny Beavan.

“On an isolated island in Bretagne at the end of the 18th century, a female painter is obliged to paint a wedding portrait of a young woman.” Costumes by Dorothée Guiraud.

Season 5 gets caught up in the American Revolution. Costumes by Nina Ayres.

A big-screen adaptation of the Jane Austen novel. Costumes by Alexandra Byrne.

A look at the lives of residents living in a Delhi mansion during the cusp of 19th century. Costumes by Joanna Eatwell.

A live-action film based on Disney’s animated film. Costumes by Bina Daigeler.

A story of the scientific and romantic passions of Marie and Pierre Curie, and the reverberation of their discoveries throughout the 20th century. Starring Rosamund Pike; costumes by Consolata Boyle.

True History of the Kelly Gang

The story of Australian bush-ranger Ned Kelly and his gang as they flee from authorities during the 1870s. Costumes by Alice Babidge.

Which of these historical costume movies and TV shows are you most excited about?