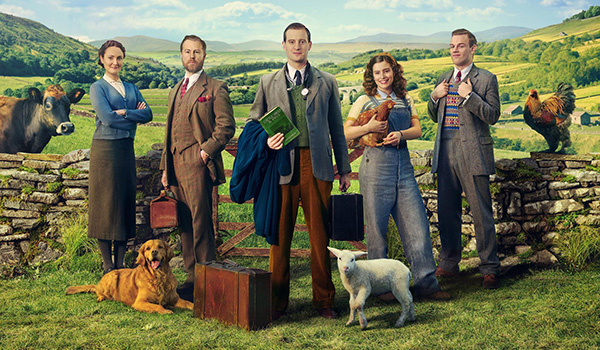 The new All Creatures Great and Small (2020-) doesn’t tread new ground. It looks and feels in many places like a shiny HD remake of the 1970s version (which I adore, of course!), at least judging by the first couple episodes. The storyline is obviously the same since both series are taken from the books, but the story beats and pacing are very similar as well, which I noticed strongly since I recently rewatched the older version.

The actors are walking the fine line between staying true to the book characters, paying tribute to the original TV show characters, and creating new versions. So far, so good. I don’t know that any of them will ever feel as iconic as the ’70s versions, but these ones are all enjoyable and satisfying enough. 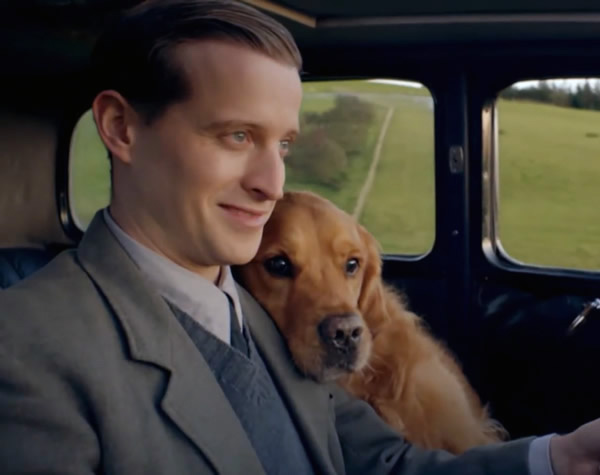 Yes, usually, I hate a remake, and especially when the original is so deeply imprinted on my memory and the public consciousness. Christopher Timothy became typecast as James Herriot, Robert Hardy will always be the best Siegfried, and Peter Davison was an ideal Tristan, it is true! But maybe the pandemic and lockdown have gotten to me, because I don’t have any hard feelings towards this remake or reboot or whatever you want to call it. The new show feels very much like the old one, and I’m not mad about it. This is the opposite of a gritty reboot! It’s a shined-up homage, and in these trying times, I’ll take it. YMMV.

There are two major differences between this show and the first version that are worth noting: 1) the Yorkshire scenery! 2) a few more posh costumes. Now, the first is really the biggest difference, and if you can, I strongly recommend watching the show on the largest TV screen possible (not just a computer screen, folks). This series is beautifully shot and will make you yearn for the countryside, no matter how much of a city-dweller you are, promise. The landscape is a character in its own right in this show, setting the emotional tone throughout.

Being Frock Flicks, we’re interested in the costumes, and while the 1930s remote, small-town farms of this story doesn’t usually mean fine frocks (and didn’t in the original show), we do get a little upgrade this time around. Most of the clothes are practical workaday gear on the local folks, lots of tweedy suits on the gents, some knits here and there. But the more upper-crust characters are even more markedly fancy in apparel here, such as Mrs. Pumphrey (the late, great Diana Rigg) and Hugh Hulton, James Herriot’s rival for the affections of Helen Alderson. 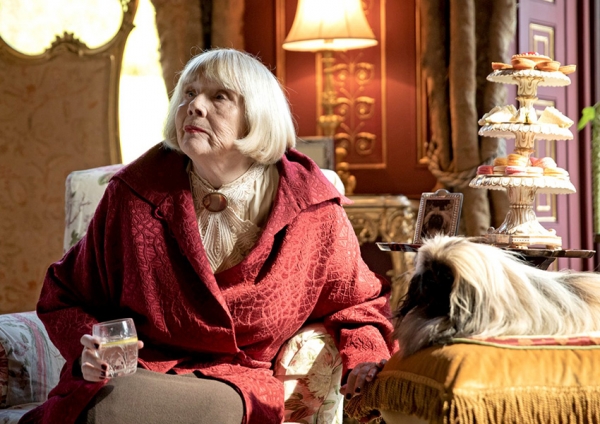 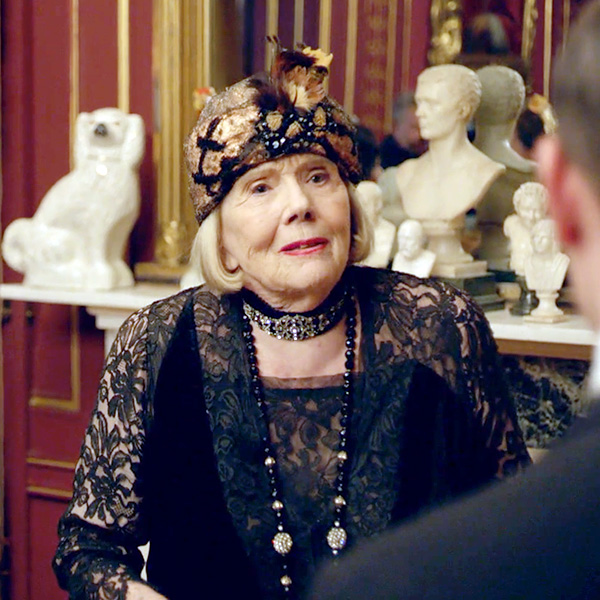 Her party (or her dog’s party, really) is the social affair.

Costume designer Ros Little (Poldark, The Crimson Field) did her research at least. According to an interview with the Yorkshire Post, she had insider info from her brother, Dr. Christopher Little, a veterinarian and a lecturer at the University of Glasgow School of Veterinary Medicine. That’s where Alf Wight (aka James Herriot), the author of the original novels, studied. Ros Little referred to 1930s photos of vet school students and talked to older vets who’d worked in Yorkshire. She notes that the character of James Herriot starts this series in somewhat more formal suits since he’s come from Glasgow, but: “He gradually moves into a more tweedy look and wears mostly corduroy trousers, which wouldn’t be what a professional man would wear but what farmers wore, something practical and washable.” 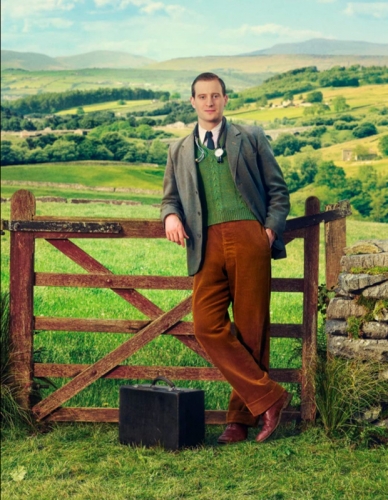 Nicholas Ralph as James Herriot (in his first screen role ever!).

Being a more eccentric character, Siegfried’s wardrobe gets touches of flash. Ros Little said in the same interview:

“Siegfried is a very strong character. He’ll wear a lovely maroon waistcoat and a flamboyant tie and always has a brightly coloured handkerchief. We wanted those flashes of colour and that bit of individuality, a little bit dapper without being impractical.” 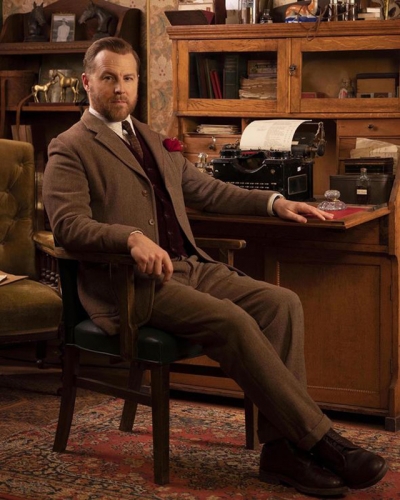 Samuel West as Siegfried — he was Leonard Bast in the original Howards End & has been in plenty of frock flicks since. 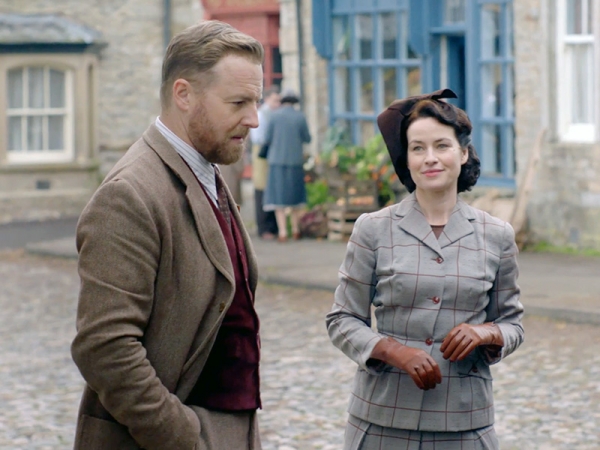 A bit of Siegfried’s maroon velvet waistcoat here as he buys a car from this lady in a smart suit (her outfit has maroon touches too).

Younger brother Tristan’s sweater has meaning behind it too. Ros Little said: “Fair Isle knitting was very fashionable at the time and Tristan is a dandy, sitting on a haystack while giving a few words of advice, so he doesn’t get his hands dirty.” 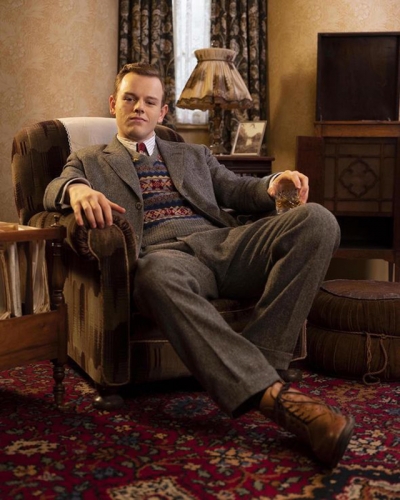 Callum Woodhouse as Tristan – most recently in The Durrells in Corfu.

This version of the books is a bit shined-up and accordingly, the female characters sport the ever-so-slightly more elegant costumes. Rachel Shenton, who plays Helen, said in This Is Y magazine:

“Helen has the best wardrobe, bar none. Ros [Little] and the wonderful costume department did an amazing job. She was the first woman in her village to ever wear trousers and in 1937 that was pretty bold. Helen loves her dungarees and corduroys and two pieces. She has serious style for a farmer’s daughter, practical chic. She is on the back of tractors and wrangling bulls and moving cattle around and you can’t be doing that in a dress.” 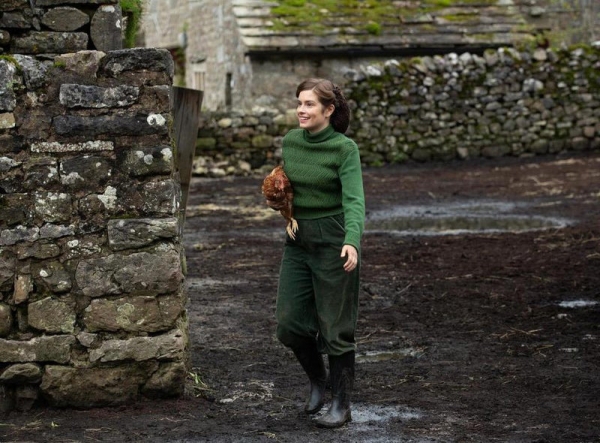 Rachel Shenton as Helen. Note her hair up in a snood.

For contrast to her everyday wardrobe, Helen gets a stunning peacock blue velvet gown for Mrs. Pumphrey’s party. As costume designer Ros Little said: “We wanted to have an astonishing change of mood. I designed the whole look around her dress.” 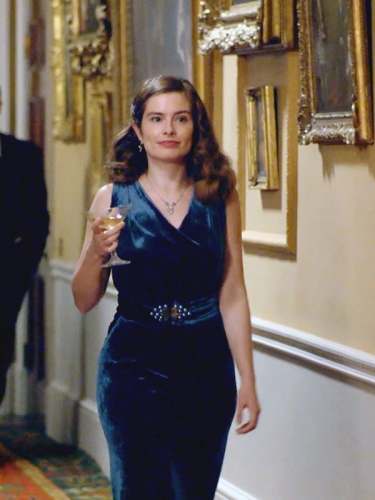 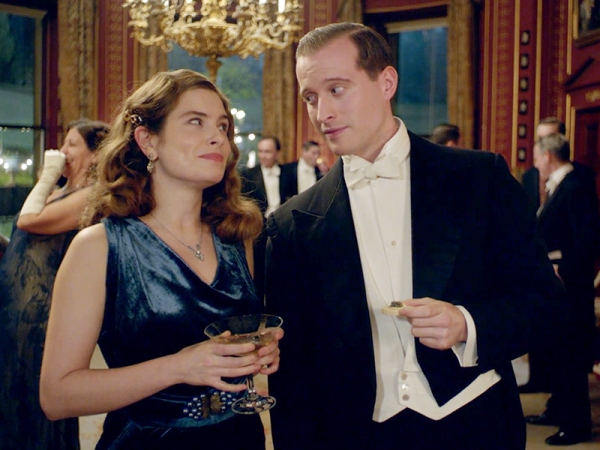 I don’t love that her hair is down with just a little side clip, but I guess it’s supposed to contrast with the older women who have more coiffed styles. 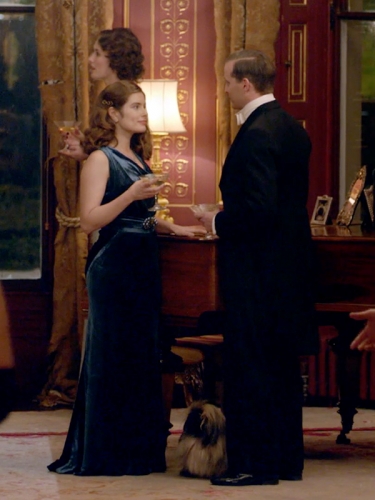 Siegfried’s housekeeper, Mrs. Hall, is notably younger in this series than the 1970s one. Maybe as the season goes on, she’ll get a backstory? That could be fun. Ros Little gave her wardrobe careful thought, showing this is a fully fledged character, saying:

“Mrs. Hall is a woman on her own. She needs a live-in housekeeper role where there would be no suspicion that she was anything other than a professional woman, so she is always very plain and her clothes are sensible and well-used. The cardigan we see her wearing a lot, it’s darned and a little bit frayed, but it’s a practical garment she puts on every day. Occasionally, we see her wearing a print apron. That is based on photographs of women in Yorkshire. They wore the same things day in day out and had a couple of different pinnies that cheered things up a bit. And she has a lovely coat and hat but it’s backdated. We don’t really see her shape. We don’t want to draw attention to the fact that she’s a young, beautiful woman.” 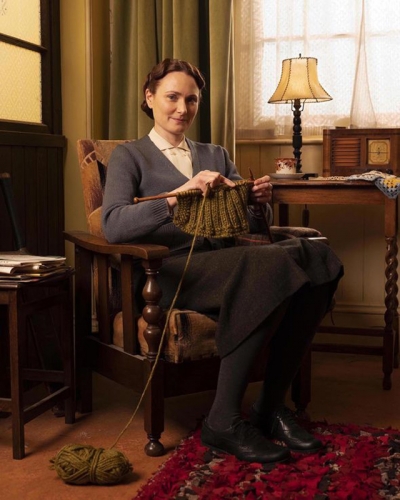 Anna Madeley as Mrs. Hall – she’s had a long career in costume dramas. 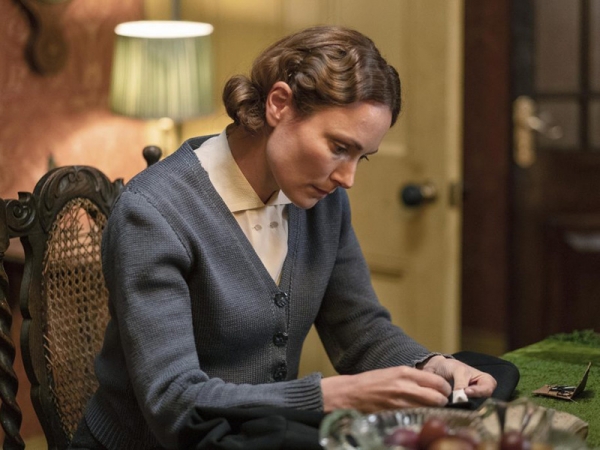 While the first season has finished airing in the U.K., we’re still in the middle of it here in the states. Look for it on your PBS station or the PBS streaming. Hopefully there will be more seasons, because, as the costume designer said: “If there is another series, which we hope there might be, it might film in warmer weather and we will see more original print dresses.” Wouldn’t that be lovely!

What do you think of the new All Creatures Great and Small?