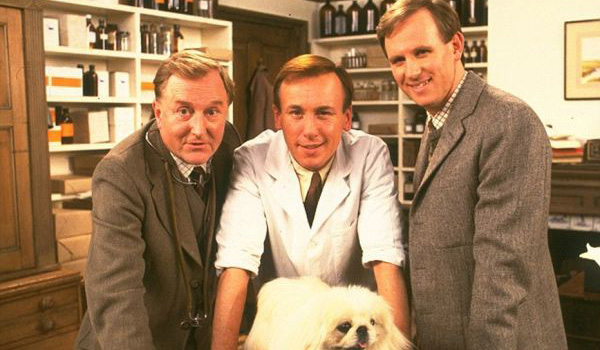 With a reboot (or revival or new version or whatever) coming to PBS Masterpiece in January 2021, I figured it was a good time to revisit the original All Creatures Great and Small (1978-1990). Only the first three seasons are currently available on BritBox, but that’s plenty enough to reacquaint myself with James Herriot, the brothers Siegfried and Tristan Farnon, and James’ love interest Helen, not to mention all the animals and quirky townsfolk of the Yorkshire Dales. This isn’t great costume drama, but it is awfully good comfort watching during a global pandemic, that’s for sure! No fancy clothes but lots of humor, warmth, pathos, and nothing that’ll bring you too far down. OK, there’s an occasional animal death, but it’s never gruesome and the characters are very humane about it. The bickering between Siegfried and Tristan will give you plenty of laughs to more than make up for any sad moments. Also, James and Helen’s wobbly romance in the first season is charming as hell. The show starts in 1937, and while it’s set in rural Britain, enough period costume details are still there. Helen’s hair is always on point, and village men usually wear hats, for example. Occasionally, James and Tristan take some ladies out to a dance, so we see everyone wearing nicer suits and full gowns. But 90% of the costuming is tweedy and simple. Carol Drinkwater as Helen in the very first episode, looking perfectly proper for the period.

One thing that’s amazing to discover is how well the production team did with costuming and makeup despite filming a batch of scenes in the London studios and then go off later to location in Yorkshire to film. In her book, Dishing the Dirt: 30 Years Behind The Scenes in Television Make-Up, makeup artist Maggie Thomas said:

“Continuity pictures became so important. For instance, we would always see the vets leaving and arriving at [Skeldale House], although we never ever went inside the real house on location and the costume and make-up had to match up exactly several weeks later when we saw them arrive back in the studio set of [Skeldale House] hall.”

In All Memories Great and Small, costume designer June Hudson agreed on the topic:

“Continuity is one of the greatest challenges for a costume designer. It is one of the hardest things to get right. I would take Polaroids and stick them in my script, next to the scenes, so that when you came to do the studio, you just look at that photograph. It was the only way to do it, otherwise you were never, ever going to get it right. The smallest details, whether a top button was done up, if they wore rings on a different hand, if they had a watch on … the viewer notices, so it is a very tough job.”

All about those details! Also, there was a certain amount of realism. This was the ’70s on the BBC, so no special effects. Certain things with the animals were done live. In his book, Is There Life Outside The Box?: An Actor Despairs, Peter Davison explained:

“People think we cheated, or something. I tell them that the BBC are not going to pay for a stunt cow that I can put my arm up. … The series was set in 1937, when vets didn’t have the luxury of modern 1977 rubber gloves, so therefore neither did the actors portraying them. All we had was a bar of soap, a bucket of warm water, and Jack Watkinson, our veterinary adviser, to show us what to do.”

There’s your historical accuracy for ya! When James, Siegfried, & Tristan are in the vet surgery, they swap a white coat for their tweedy jackets. That’s about it for costume changes. The rich Mrs. Pumphrey pampers the hell out of her pekingese Tricki-Woo. This also lets us see one of the few dressed-up ladies of town (here, with a bit of Helen). Tristan, as the younger brother, often wears sporty sweaters. Helen has a hat because she’s visiting in town. And a lovely ’30s wedding ensemble when James & Helen do tie the knot.

Are you a fan of the original All Creatures Great and Small? Will you be watching the new version?