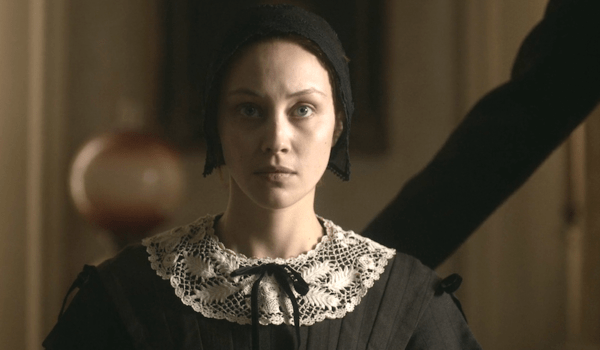 Alias Grace — the 2017 Netflix miniseries adaptation of the Margaret Atwood novel — is probably more interesting for its story and historical context than for the costumes. It tells the (based on a true) story of Grace Marks, convicted of a double murder in the 1840s, and the psychologist who is trying to figure out if she is insane about 15 years later. The costumes are very well done, if not particularly shiny, and yes, this is NOT an era I get the least bit excited about costume-wise. But more importantly, it’s a well acted and engaging story, even if I didn’t love the ending.

The adaptation was written and produced by Sarah Polley, and she tried (and, I think, succeeded) in making this the antidote to all the Harvey Weinstein Hollywood BS. There’s lots of press out there about Alias Grace being a woman-led production — check out these articles at Indiewire and the New York Times for more.

I’ll try not to get spoilery in here, but to talk about the show, I may give some elements away — so read at your own risk!

Sarah Gadon (of The Girl King) plays Grace, and I found her very convincing and engaging. My main problem was with how the story resolves the question of guilt in terms of the murder. It’s a very 19th-century explanation, and while on the one hand that’s interesting to watch, the practical side of me doesn’t buy it; so the idea that Grace’s character can be so good and honest in one track in her life, but then be involved in a murder, doesn’t fly. Of course, that’s the thing the series is trying to grapple with, but I felt that the Victorian explanation for things makes me feel unresolved. 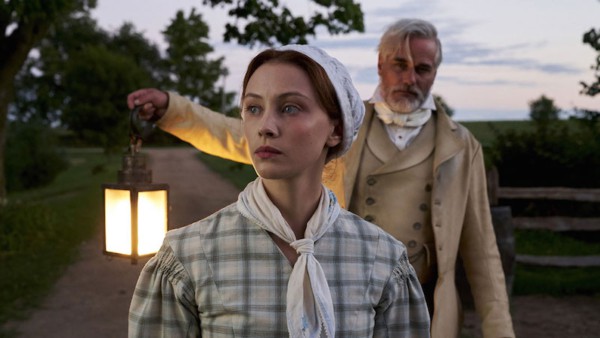 Edward Holcroft plays Dr. Jordan, and I spent the entire series thinking he was Matthias Schoenaerts and wondering why they’ve given Schoenaerts such shitty wigs in every other production (which, to be fair, only really applies to A Little Chaos), because clearly if they’d just cut his hair I would have found him hot. Ooops! Holcroft also gives a strong performance, and it’s interesting to see him grapple with Grace as an unreliable narrator who he really wants to believe and understand. 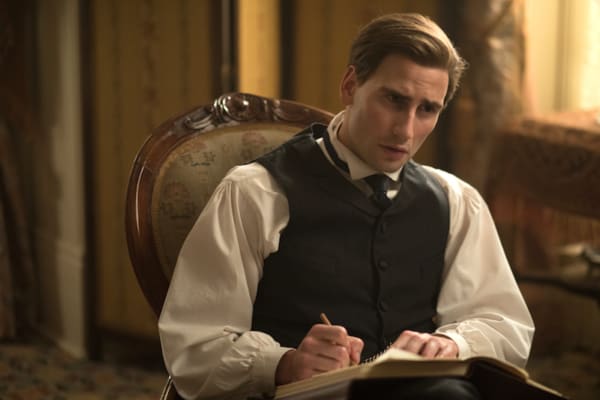 The costumes were designed by Simonetta Mariano, who as far as I can tell hasn’t done any period work before except an episode of Ben Hur (2010). She clearly knows her stuff both from an historical as well as character angle, and I’d say the costumes were quite spot on for both the 1840 flashbacks and 1850s current-day scenes.

Of course, you get a TON of servant wear, as that’s the main focus of the story. The Guardian reports:

“These outfits were not created to be aspirational. Alias Grace’s costume designer, Simonetta Mariano, says that the fabrics were muted – ‘stained and faded and bleached by the sun’ – because Grace lived an unspeakably hard life. Her modesty is vital, partly because ‘if you were a maid, you couldn’t be more attractive than your bosses,’ she says. The onus was on maids to make themselves invisible; to keep their tempting bodies hidden from men’s view.” (Margaret Atwood: the unlikely style soothsayer of 2017) 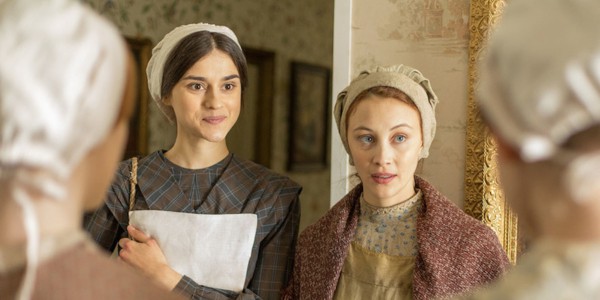 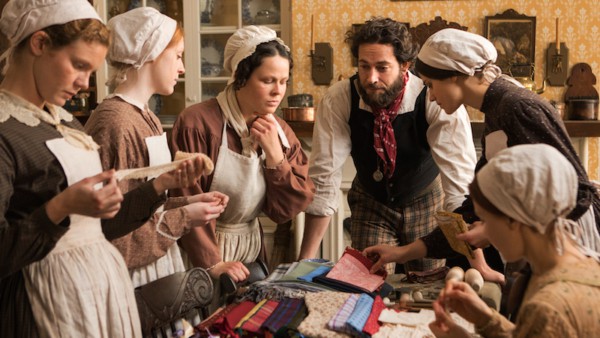 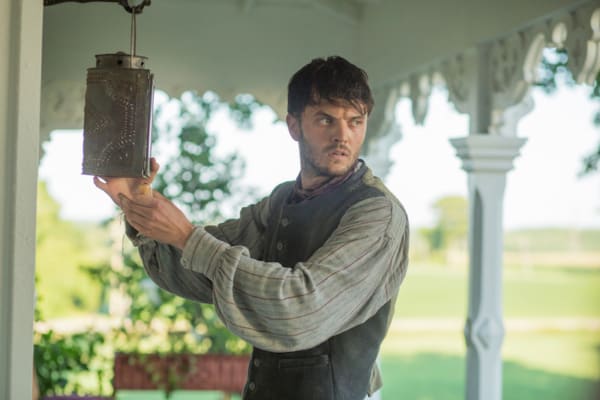 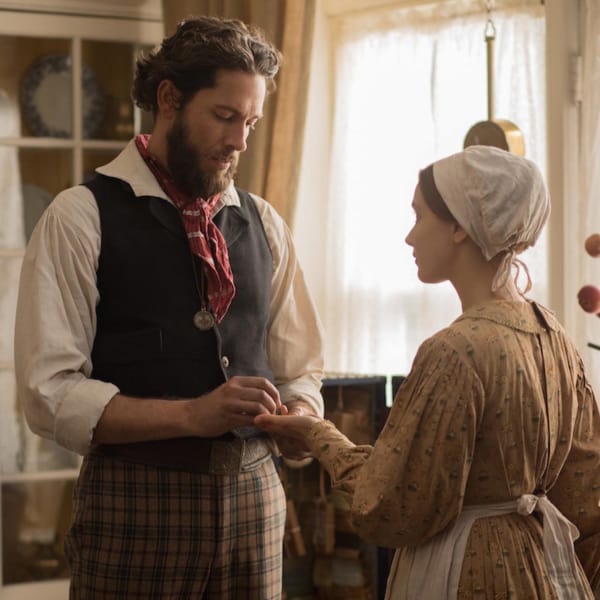 But there’s also some minor upper-class characters around to keep things more interesting: 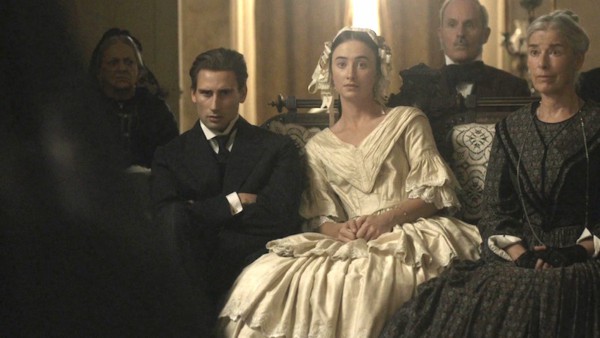 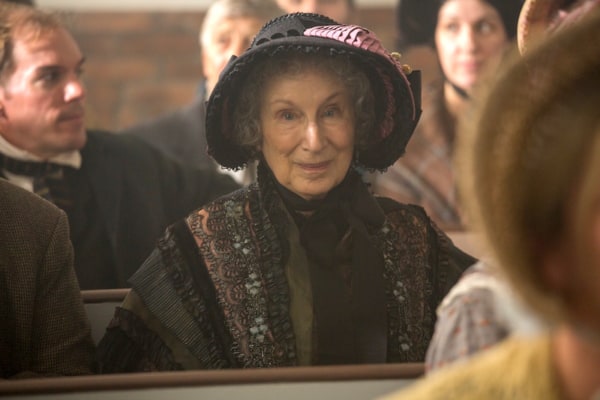 That’s Margaret Atwood in a cameo…

And you’ve got Anna Paquin (The Piano, Roots) as the housekeeper who shows up halfway through the story to hire Grace. She’s quite well-dressed, which is an important plot point.

I thought this pink plaid, gathered-front dress was the most successful. Racked reports,

“The other pink dress Montgomery [Paquin’s character] wears in the series, a colorful plaid look striped with yellow and green, was inspired by a pattern Mariano discovered while doing her pre-show Victorian research. A few days after putting it on her mood board, the designer discovered an identical fabric at a shop in Toronto. ‘When that happened, it was like a sign,’ she says. ‘Okay, I have to do this fabric. I have to do this dress!’” (How a Pink Dress Made It Into Margaret Atwood’s Murder Mystery) 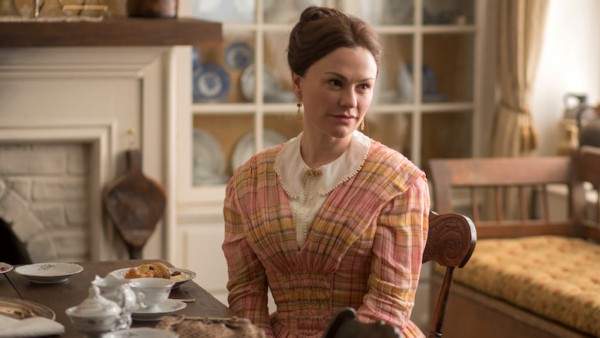 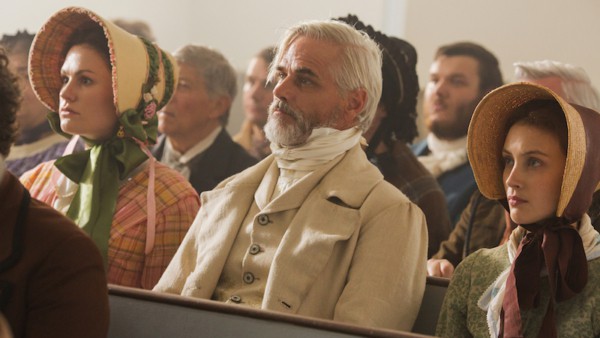 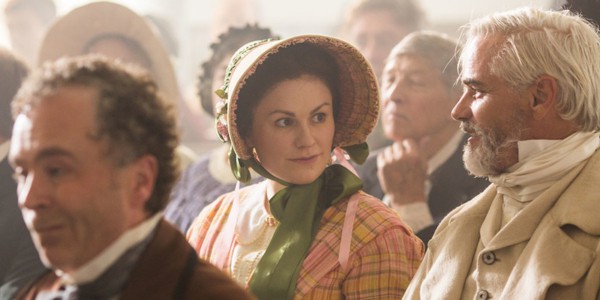 The other key dress is this pink one, which I thought was interesting from a story perspective but I didn’t love the closure/fit. The problem was that a cross-over front like this should, I think, close in the front; plus, that widely open neckline makes the dress pull off Paquin’s shoulders and get all wrinkly around the bust, which I couldn’t stop staring at. 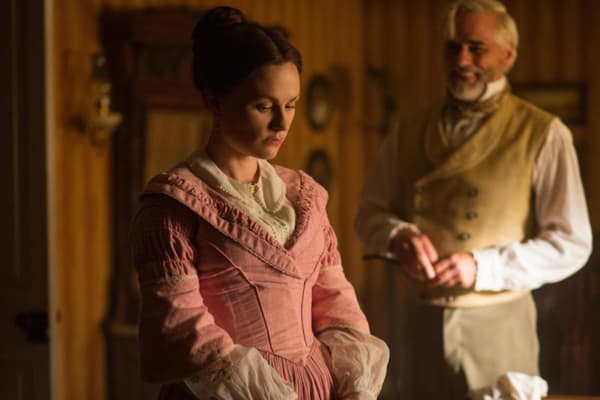 What’s great, though, is that they made a point of following the real history in putting Grace in this dress on the stand. Racked writes,

“Montgomery’s dress, which neither fits nor flatters her [Grace’s] figure. ‘I did that on purpose,’ Mariano explains. ‘Some people will think, ‘Oh, it’s a bad fitting,’ but it was important that it did not fit. She stole a dress that did not belong to her.’ What’s more, Grace didn’t even steal the whole dress: She wears it with her own simple chemisette (an undershirt popular during the 19th century) instead of Montgomery’s structured, collared version. The overall effect is that of an unsophisticated pauper playing dress-up, making Marks appear even more out of place.”

What’s even cooler is that the designer fought (and won) to have Grace wear a super frilly cap under a bonnet that is straight out of the only known image of the real Grace. Again, via Racked:

“Director Mary Harron wanted to keep the images ‘extremely simple,’ and the hat was quite literally the opposite of no-frills. Mariano conceded to removing distracting details on certain looks (‘sometimes five minutes before going on camera, tearing off all the ribbons on the hats,’ she says), but fought Harron on Marks’s bonnet. ‘I said, ‘I think the only chance for you to have something that looks like it belongs to Grace in her story is that bonnet, and you have to reproduce it,’’ Mariano remembers. ‘And with the help of the producers, we kind of convinced her.’” 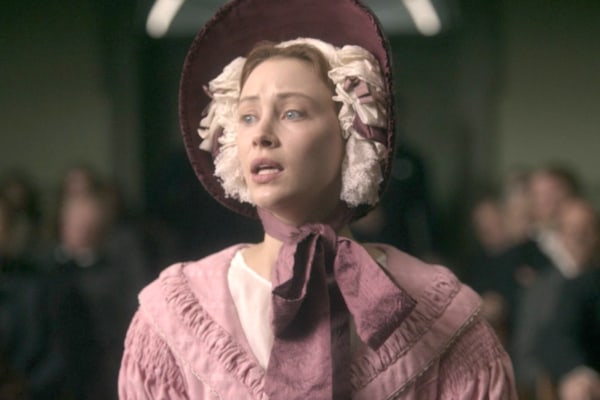 I was also confused by the closure on a number of gowns — that pink one above has visible lacing, but what’s going on with dresses like these two … is there hidden lacing under there or what? 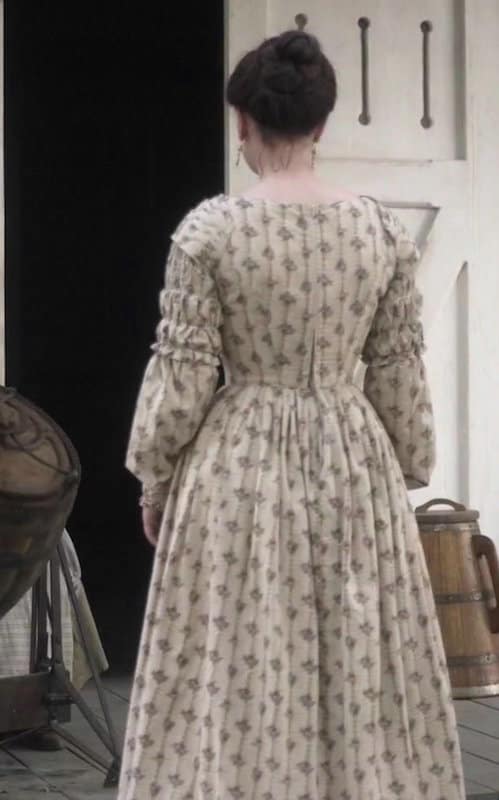 What did you think of Alias Grace?