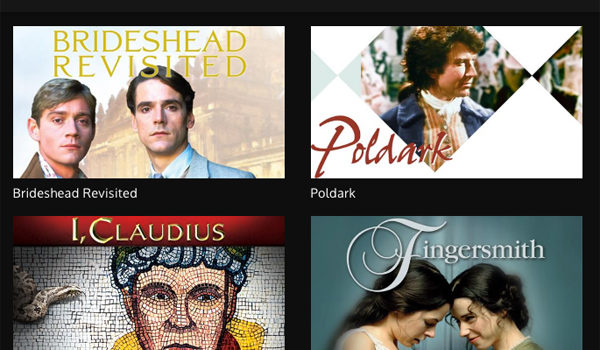 When you’re looking for historical costume movies and TV shows, not everything can be found on every platform. We’ve discussed various ways to find shows before, but I want to look at one option, Acorn TV. It’s a streaming service that specializes in British TV shows, both drama and comedy. Obviously, that leads to plenty of historical costume series and movies too. While you won’t find current stuff such as Downton Abbey on Acorn TV, this is where you go for classic Brit frock flicks like Upstairs Downstairs (1971-1975).  Acorn can be streamed, commercial-free, on your computer or phone, plus it’s available via Roku, Apple TV, Samsung Smart TV, Amazon Fire TV, and more.

While availability changes every month or so (similar to Netflix or Amazon), right now, some of the historical costume movies and TV series available only through Acorn include Lady Chatterley (1993) with Sean Bean, the Victorian lesbian miniseries Fingersmith (2005), Jeremy Irons in Brideshead Revisited (1981), 17th-century colonists saga New Worlds (2014), and the original Poldark (1975-1978), before Aidan Turner.

Other Historical Movies and TV Shows on Acorn

In addition, Acorn has costume dramas that can be found elsewhere, but IMO are difficult or expensive to find. You could download each of the 12 episodes of the delightfully wicked I, Claudius (1976) for $2.99 or buy the DVD set for $29.99, but one month of Acorn TV is just $4.99, where you can watch the whole series.

More movies worth watching on Acorn are The Crimson Petal and the White (2011) for gothy costuming, the silly fun of Lost in Austen (2008), brilliant Shakespeare sidelining Rosencrantz & Guildenstern Are Dead (1990), James Purefoy in Beau Brummell – This Charming Man (2006), and The Scarlet Pimpernel (1982) with Anthony Andrews and Jane Seymour. You’ll also find a wealth of historical documentaries (usually from the U.K.) on Acorn, covering topics such as royalty, art, architecture, and travel.

If you’re interested, give Acorn TV a whirl. Nope, we don’t make anything off this review or link — I’ve reached out to them to see if they’d be interested in some kind of sponsorship / advertising and heard nothing. Crazy, huh? That’s why we rely on donations because you fine folk are more reliable than big business, even if they’re in our niche. But do let me know if you try Acorn and what you think of it!