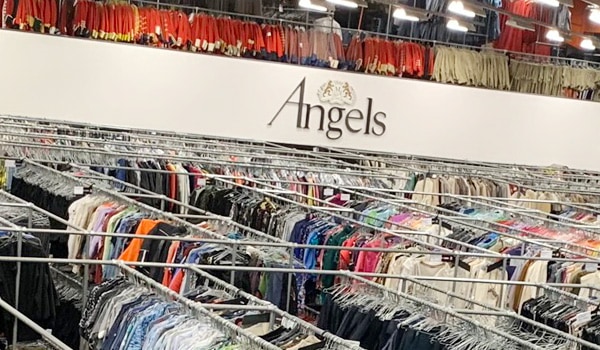 When we talk about recycled costumes in frock flicks, that’s usually because the outfits have come from one of the big rental houses. In Hollywood, Western Costume is the go-to, in Italy, it’s Tirelli, and in the U.K., there’s Cosprop and Angels Costumes. Of these, Angels calls itself ‘the largest privately owned collection of costume for film, theatre, and television anywhere in the world.’

Established in 1840, this remains a family-owned business, and Angels Costumes offer occasional tours to the public to visit the workshops and see the 9.5 miles of hanging costumes stored in a facility in the London suburbs. Of course I had to go behind the scenes and share what I could with all of you! Photos are limited for copyright and non-disclosure reasons, but what I show here was allowed, plus I had a lovely conversation with Production Director Jeremy Angel. 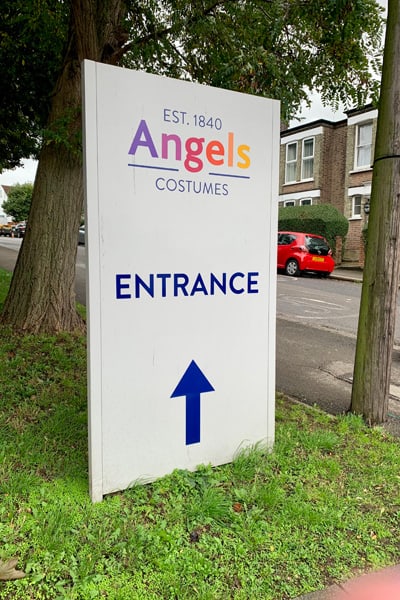 The HQ is situated in a nondescript area about an hour’s train trip from central London.

The tour starts in the workshops. These rooms are where highly skilled drapers, tailors, and seamsters do the hard work of creating garments from scratch. A costume designer like Colleen Atwood or Sandy Powell comes into Angels with the costume requirements for a production, and this can range in scope from building an entirely custom gown to retrimming a suit to making accessories. A film or TV show may hire Angels to costume the principle actors or the extras or both or anything in between. Every project may work a little differently.

The amount a costume designer consults with Angels can vary, as Jeremy Angel discussed:

“Some people come in with a very specific idea of what they want and that’s what they go after. Whereas others are much more open, and you can have a conversation.
‘I’m only looking at ’30s.’
‘Well, have you thought of looking at ’20s?’
‘Oh yes, I didn’t think to look at the ’20s.’
It’s things like that where you have to go back to look at where you are now, and you can include it. You’d never walk down the street now and only see someone wearing clothes that were made in 2019.” 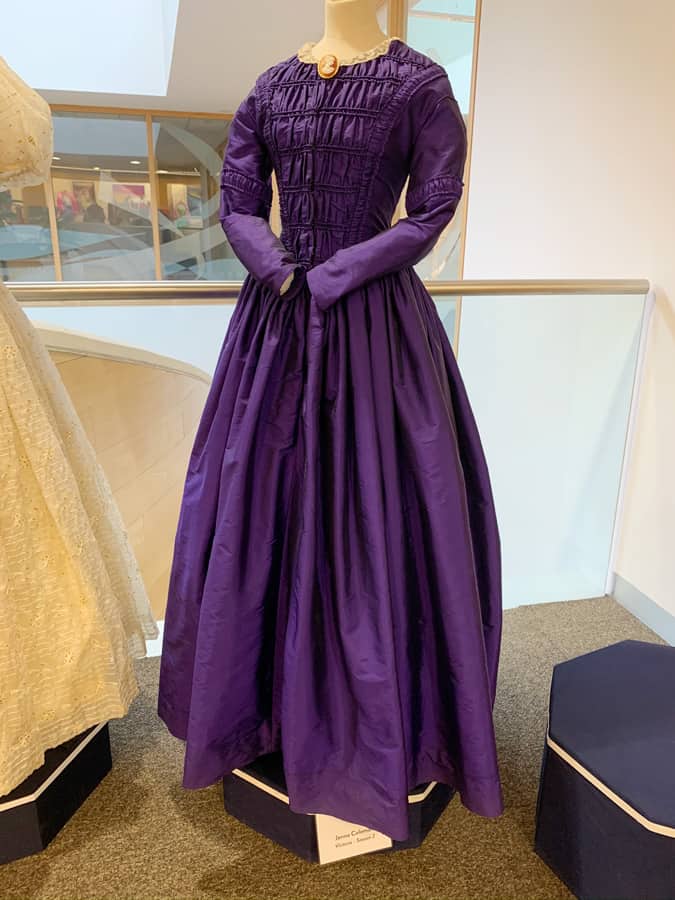 1840s gown worn by Jenna Coleman in season 2 of Victoria, on display at Angels. 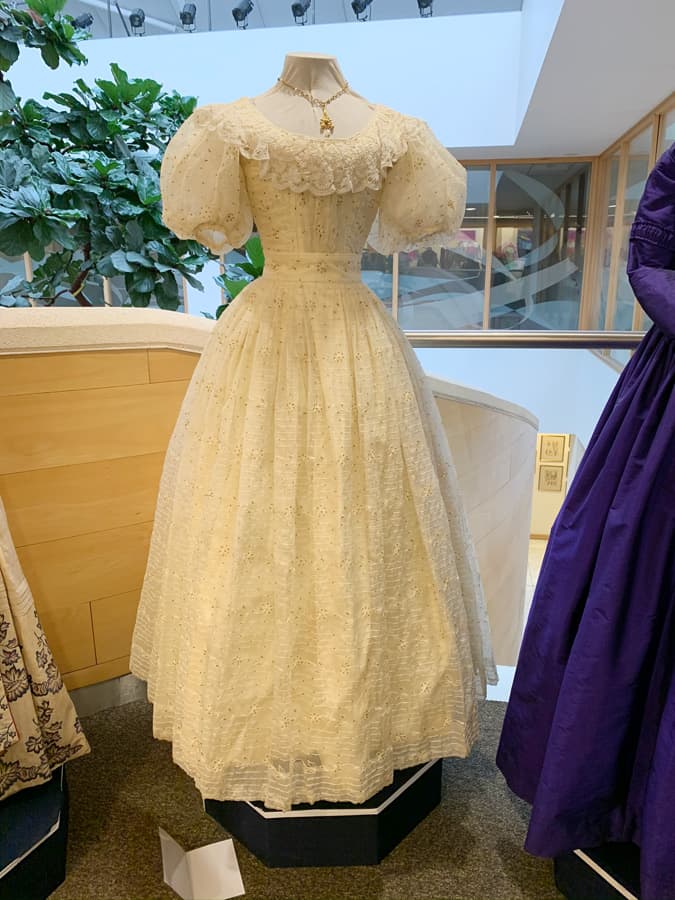 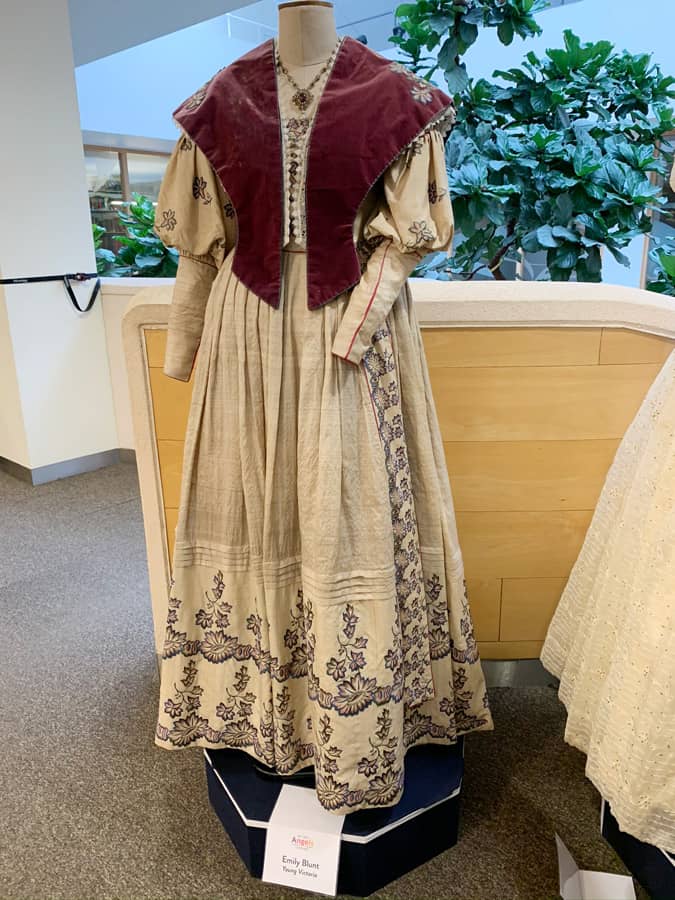 Embroidered gown (without petticoat!) worn by Emily Blunt in the film The Young Victoria (2009). 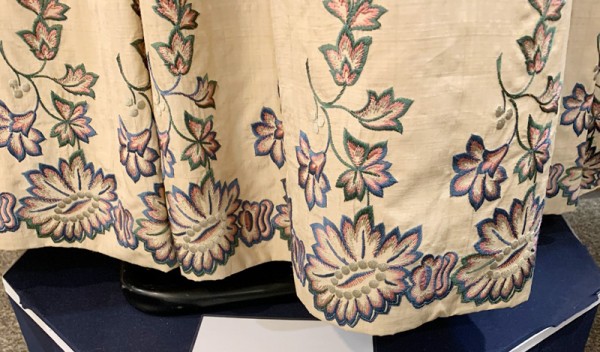 Here’s the thing to that leads to costume “recycling” — when a designer has Angels build an item, their movie or TV show can use that item exclusively first, including for publicity shots, and for a limited amount of time. After the contract period, the item that Angels has built goes into Angels stock. They own it, and they can rent it out to other productions forever. The costume designer designs the costume for Big Movie or TV Show XYZ, but Angels makes the costume and ultimately owns the costume.

Jeremy Angel explained this “made-for-hire” process and is amused that some of us have noticed how historical costumes get around:

“There’s a few blogs and websites out there that talk about costumes being reused, and I love those because you start reading the comments and people go, “I can’t believe they’ve done that.” Well, how many Elizabethan dresses that are that size do you think exist in the world? So of course it’s going to be reused. It’s lovely when things get reused, and people don’t realize it.”

There are exceptions to made-for-hire though, such as certain productions that have their own costume shops and studios like Marvel or Disney, which prefer to own everything. But even Disney has worked with Angels for new designs or to pull things from stock. Another exception is theater costumes, such as for the West End or Broadway. Because those outfits are subjected to a ton of wear — often eight shows a week! — the production buys the costumes from Angels, and they may last only two years. 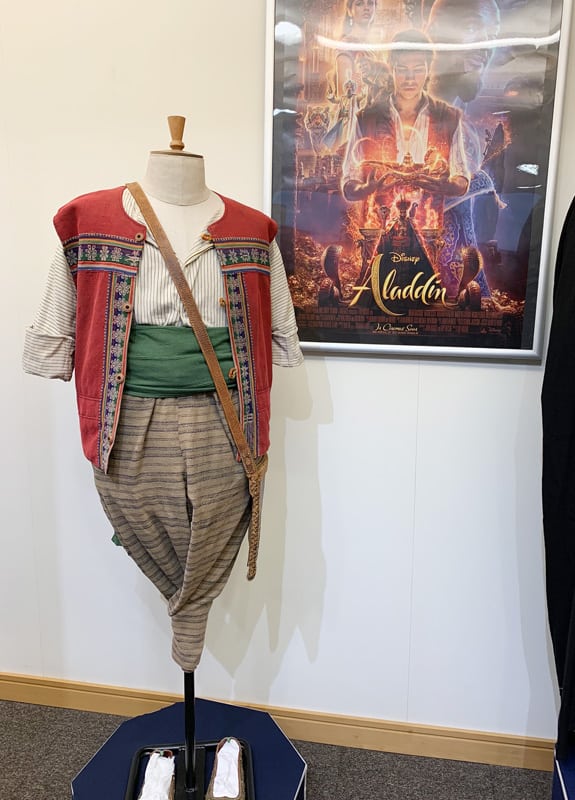 For the 2019 live-action Aladdin, Disney hired Angels to make these costumes, & they pulled pieces from stock for the main character’s outfit. 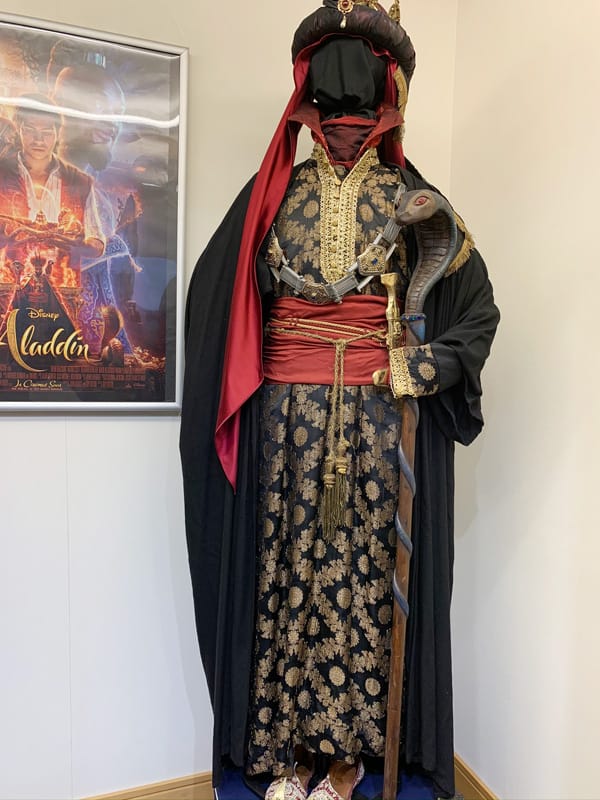 Jafar’s elaborate robes from Aladdin were a mix of stock & custom. 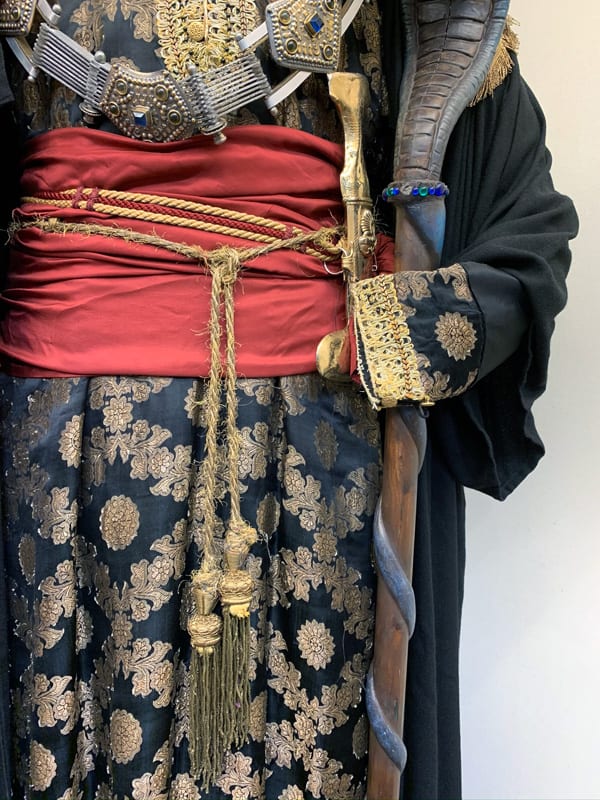 The film and TV costumes that Angels has been commissioned to build are primarily how Angels has amassed its vast collection over the decades. In addition to these custom works, about half of their Victorian garments are authentic antique pieces, which are used both for study and rented out. They own a variety of authentic garments from other periods, with their oldest being a pair of 1610 shoes. In the workshop the day I toured, an 1790s jacket was being studied for patterning, and over in the racks, several vintage 1920s dresses recognizable from use in Downton Abbey were hanging. 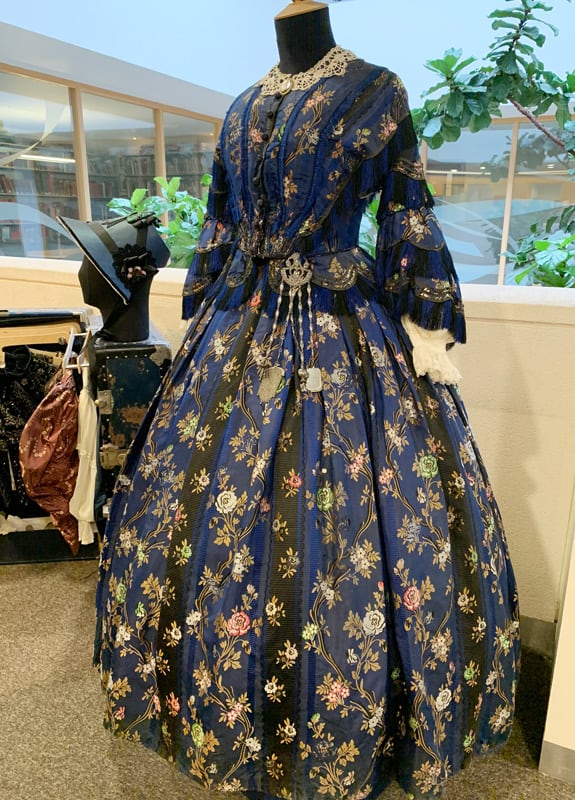 An authentic 1850s gown on display from the Angels collection. 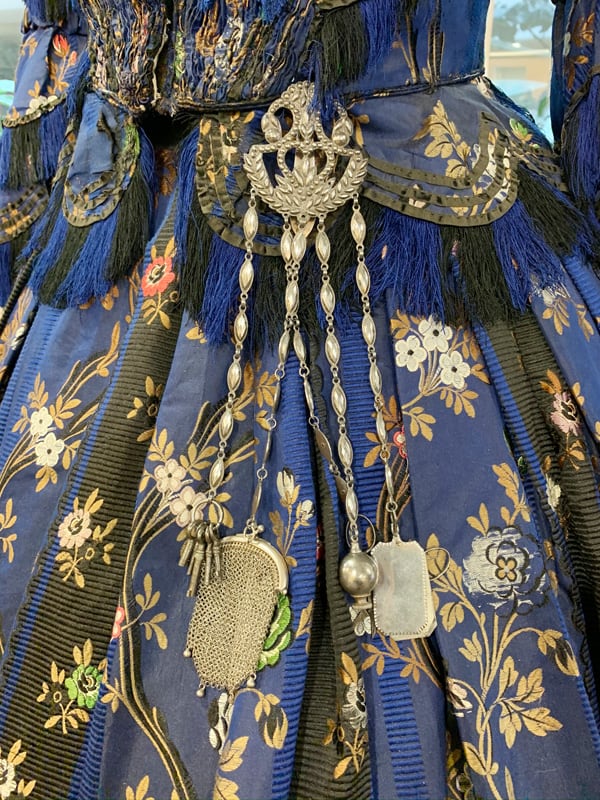 With a vintage chatelaine. 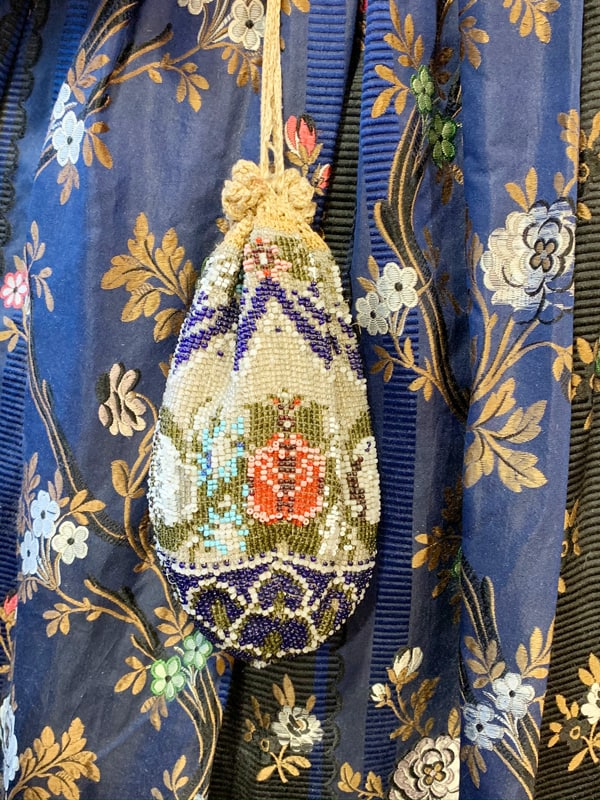 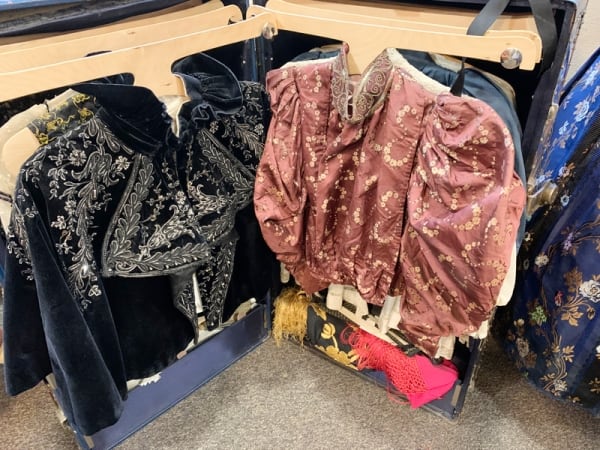 Several late 19th-century bodices on display. All of these items have been used in multiple costume dramas over the years, as well as being used for study.

Garments last at Angels for as long as possible, even the authentic items. Jeremy Angel explained:

“Take a Victorian piece, it can last a hell of a long time. Because when it gets worn down and overused, it becomes lower-class, and you can use it then. Once that becomes completely broken-down, you can start taking the fabric, if it’s original, and using the fabric to make other things. If we can’t hire it out anymore, we take it back to scraps. Also, the alterations department, they’re geniuses. We try to make things last a long time.” 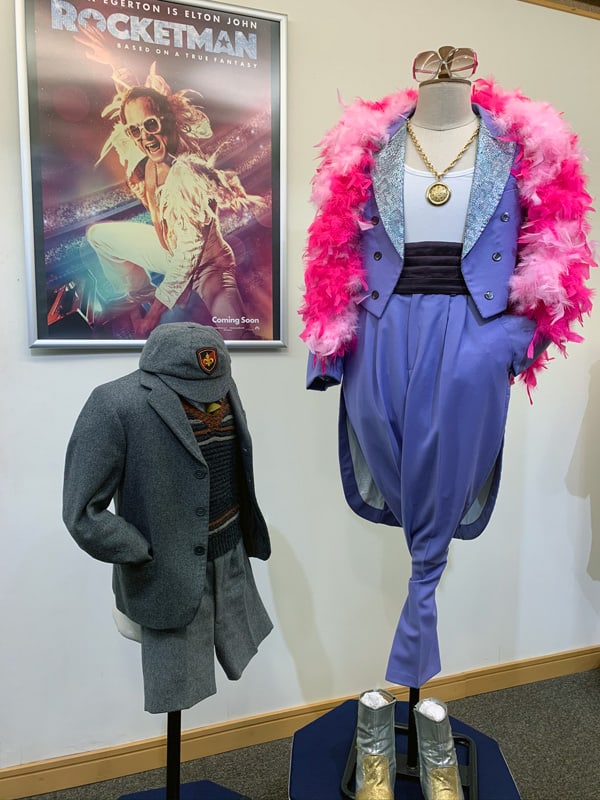 We don’t cover 1970s on the blog, but I was allowed to take pix of these recent productions (& I’d just seen RocketMan on the plane!). 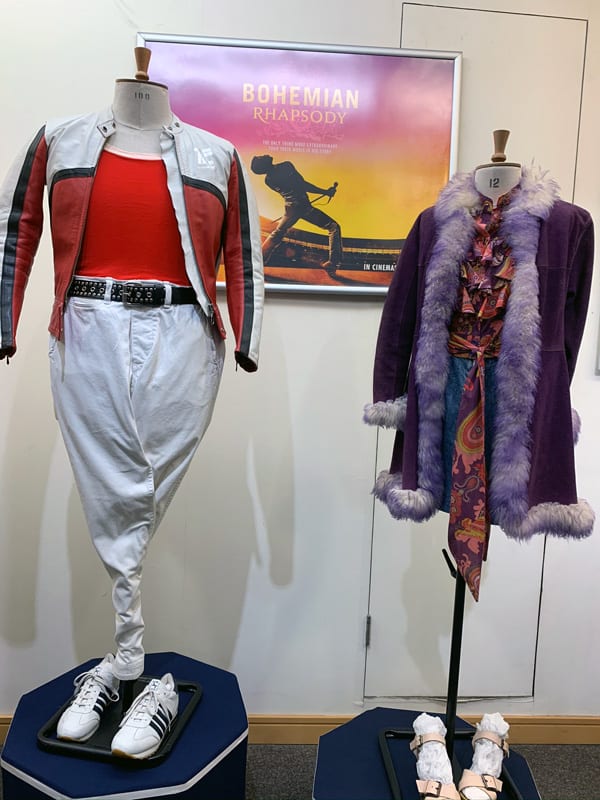 The workshop areas are relatively small compared to the vast warehouse section of Angels Costumes. This is the rental “stock” of costumes that can be used over and over again. The 9.5 miles of hanging garments are not cataloged, photographed, or computer-coded — they’re organized by hand and sorted by individual staff who simply learn and remember where things are. It sounds like a daunting job to me, but this is how the business has worked for generations. 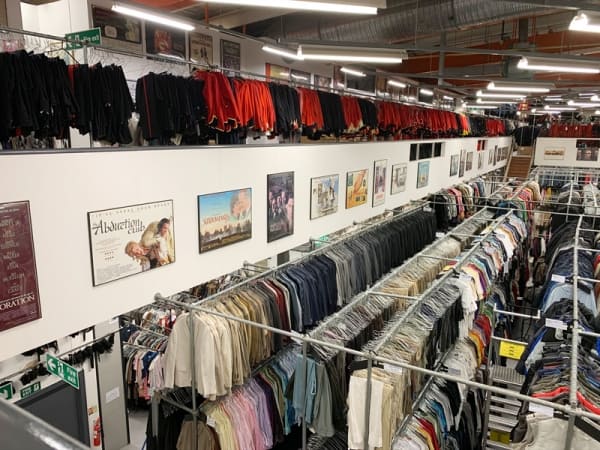 Garments are sorted by historical period then color, quality, and class, and items are all stored on sturdy metal racks three levels high. Air is recirculated through the entire building every 2.5 hours to keep out moths, and there’s a separate refrigerated room for furs and fur-trimmed costumes to absolutely keep out moths. A separate room contains all the jewelry, crowns, tiaras, and blingy headpieces. Certain special couture garments, called the ‘principal collection’ are stored in a gated area.  There’s a vast section of about 16,000 Georgian through Victorian costume pieces alone! Can you imagine just remembering where things are in there? 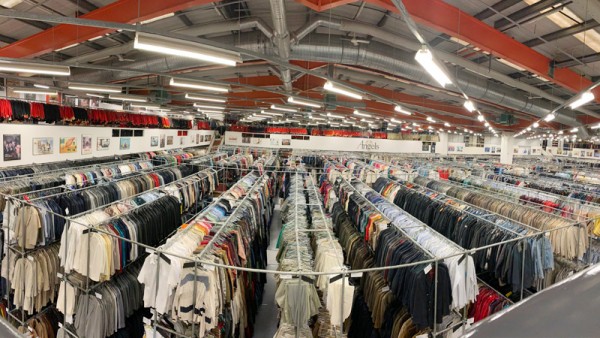 While the warehouse is vast, what’s really important are the details, a point Jeremy Angel and I agreed upon:

“It was very interesting when HD came along, a lot of people thought, it’s not exactly going to be the death of the industry, but it’s going to make things a lot harder. And, yes, it’s made things harder, but it’s made people realize detail is important. We always say it’s not that big, it’s THAT big even on the screen, and in HD it’s now THAT big and it’s crystal clear. So you have to make sure you’re accurate and you’re correct. And that is the worst thing for us, watching a film, is when they’ve done something wrong. Whether it’s the fact that there’s a military symbol that’s the wrong way round on a sleeve — the fact that these blogs exist to ask ‘can you believe they did that?’ That’s amazing, how people are paying attention to costume, that’s phenomenal. It’s a really good thing. Details are important. I love the fact that people watch for that.”

Preaching to the choir! If you’re in the area, I highly recommend seeing if a tour is available. Angels also has a book titled Behind the Seams that tells the history and inner workings of this costume house.