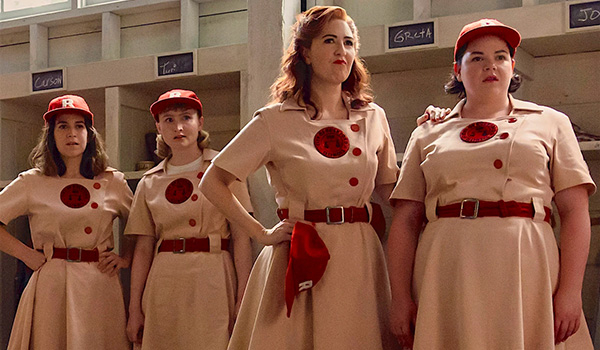 Most of us here at Frock Flicks have been on-record as hating the current trend of endless remakes and retreads of the same stories in movies and TV. Whether it’s yet another adaption of a beloved but none-the-less overdone classic novel or a supposed retelling of the same old bits of history or, worst of all, the gritty reboot. So I was trepidatious about Amazon’s TV series version of A League of Their Own (2022-). I enjoyed but am not precious about the 1992 movie, yet I wasn’t sure of the need to revisit this story. Oh boy, was I wrong, and am I glad to have been!

This isn’t really a remake or adaption — what the TV series of A League of Their Own does is take the concept and setting of the movie A League of Their Own and put in all new characters and stories. Because this is an eight-part series (so far), there’s space to tell multiple stories instead of just one arc. While the show has a lot of characters, they’re each well-fleshed out individuals that are slowly revealed over the course of the episodes. Some are more complicated than others but they all feel believable and interesting. The cast is excellent, and I really enjoyed watching them as these characters working through their problems and finding their way.

Much of the story is about personal discovery, within the larger frames of racism, sexism, and homophobia. That could be dark or heavy-handed, but it didn’t seem that way to me. Everything that happens has an appropriate historical context and resonates emotionally in the story. It’s well balanced. And it’s fun! There’s some snappy dialog (yes, some is rather modern but not in a “he’s a 10, I never trust a 10” way, whew), and so many fantastic scenes of female camaraderie, on the ball field and off. I can’t think of the last time I watched something where so many women onscreen were real friends, deep friends, silly friends, and more. This is the female representation we need, Hollywood! Actual women being actually human with each other. It does happen now, and I bet it did happen in the 1940s, so I’m glad to see it here.

When the advance press for this series showed up, there were some complaints about Black characters being added when the All-American Girls Professional Baseball League (AAGPBL), upon which the story centers, was whites-only. Some thought that Black women playing baseball wasn’t historically accurate, oh noes! how dare! it’s all a woke plot! blah blah blah. Well those whiners should watch the series and shut the fuck up because that’s not what happens at all. There are two main storylines that run in parallel and intersect at points. For that matter, there were several Black women who played baseball in the Negro Leagues from the 1930s through the 1950s, so this show is working with a historical precedent. Oh and seven women from Cuba played in the AAGPBL, so the series is reasonably accurate on that point too. 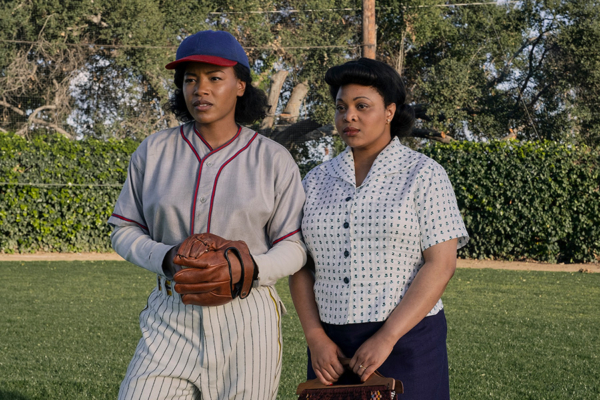 Max shows up at the AAGPBL tryouts with Clance — & is rudely turned away.

What’s more interesting, IMO, and even more historically accurate, is that this TV show adds back the queer women of the All-American Girls Professional Baseball League that the 1992 movie left out. The whole reason the league wanted its players to wear skirts and makeup and go to charm school was so they didn’t “look” like lesbians, but the fact is that many were. Maybelle Blair, pitcher for the AAGPBL’s Peoria Redwings in 1948, said recently: “Out of 650, I bet you 400 was gay.” Netflix’s documentary A Secret Love (2020) is all about Terry Donahue, also of the Peoria Redwings, finally marrying her life-long partner, Pat Henschel, who she met back when playing baseball. Josephine “JoJo” D’Angelo, who played on the AAGPBL’s South Bend Blue Socks from 1943-44, was dropped from the team because she got her hair cut too short and thus it was too obvious that she was a lesbian. There’s countless more real stories of queer women in 1940s baseball, and with this version of A League of Their Own, we’re finally seeing them onscreen. If anyone dares call it “agenda-pushing,” they just need to look to the history first, the history that’s been hidden, denied, and overwritten. #SorryNotSorry that it’s out in the open now!

Not only is the story based in history, the costuming is solidly of the period. I discussed the AAGPBL baseball uniforms, and specifically the Rockford Peaches, in my review of the 1992 movie, and all that applies here. Costume designers Trayce Gigi Field and Nancy Steiner (who designed the pilot episode) reproduced those uniforms well. They also created nice 1940s wardrobes for each character and a town full of extras that brings the era to life. I love looking in the stands at the baseball games and seeing folks wearing hats! Many of the main characters wear hats when not in uniform as well, and those who don’t are specifically the less femme characters. As Trayce Gigi Field told Fashionista: “They each have their own look and vibe. I was trying to give all the characters their own individuality.”

In Variety, Field talks about how she designed the wardrobe of each character according to their story arc. For Carson Shaw, the Iowa housewife who becomes the team’s coach:

“We went with hints of pinks, soft green and a little bit of brown. She wasn’t overpowering in her color. She was in a role that she thought she filled. As the show progresses, she becomes more carefree.” 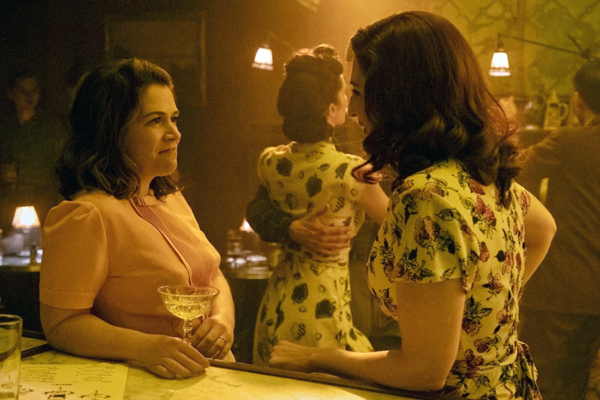 Carson & Greta early in the series. Also check out the print dress & hairstyle of the woman in the background. 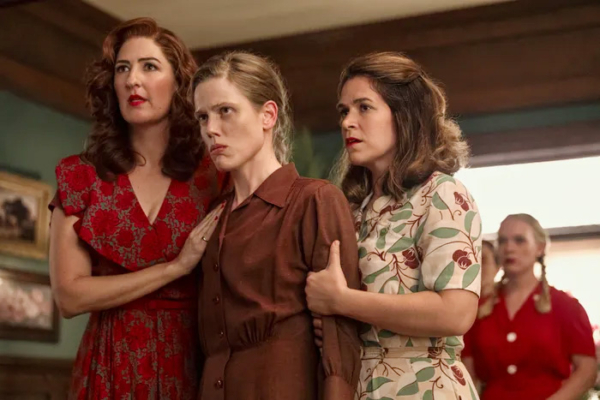 Greta & Carson help Jess through the required ‘charm school’ for the team. Nice variety of prints & details on their dresses.

Max Chapman, a Black woman who’s trapped by family obligations, goes through a more dramatic progression. Field said to Fashionista: “Max is trying to fit into a box of who she’s ‘supposed’ to be — what her mom wants her to be.” Her clothes start very plain and tailored, then Field says in Variety:  “Max wears dresses that start to have more detail, and by the end, she’s starting to feel herself.” 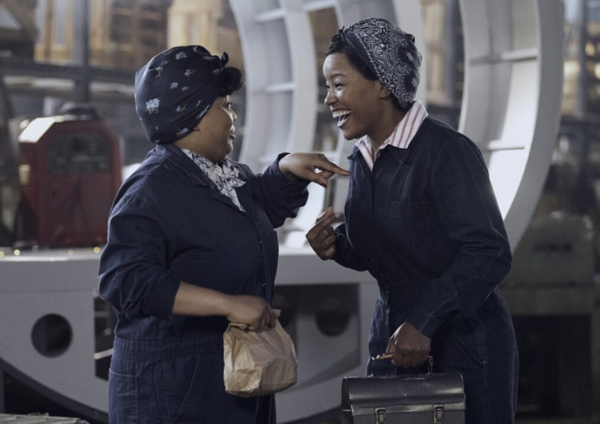 Clance & Max working at the factory. 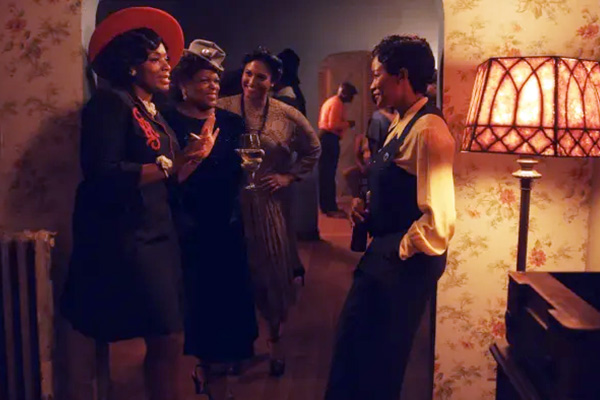 Max at a party later in the series as she begins to express herself.

Max’s best friend Clance Morgan is an aspiring comic-book illustrator, and in Fashionista, Field says of her: “She’s my fashion-forward girl, in terms of not conforming to fashion norms [of the era].” The bold graphic prints she wears are meant to evoke her passion — “”If you look close enough, [the print] looks like a comic strip.” 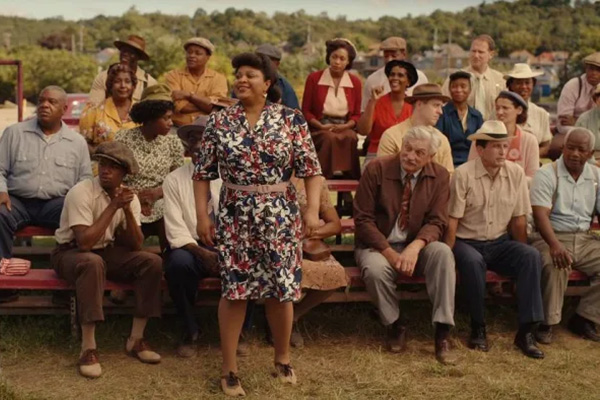 Clance in a print dress.

Field also used vintage clothing throughout the series, noting: “If it’s actually from the ’40s and it’s not disintegrating, let’s use it.”

I don’t really want to talk more about the plot or even more of the costume specifics because that could give away some very interesting things that happen. I just hope folks watch it and enjoy seeing these characters figure out their lives! Feel free to dish some spoilery talk in the comments though ;)

Have you watched the new A League of Their Own series?