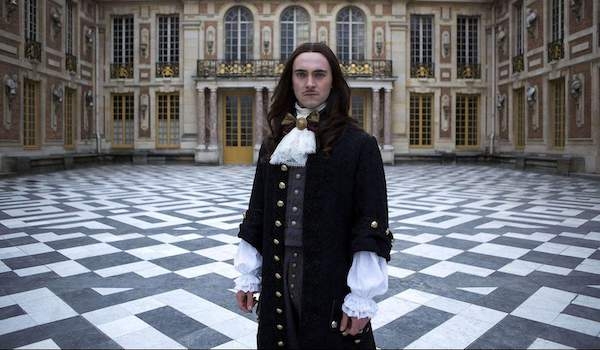 We’ve been eagerly awaiting the U.S. premiere of the TV series Versailles pretty much since we started the Frock Flicks blog. No lie — August 2014 was our first post about it, the month we launched! We’ve posted regular updates ever since, and now, this weekend, after having aired in France in late 2015 and in the U.K. last summer, Versailles will finally come to the states via Ovation. Whew.

Of course, we have high expectations after all this build up. It’s like two years of foreplay, so there better be a money shot! And yes, the euphemism is appropriate because this series promises to be super sexy, dealing with Louis XIV’s rapacious sexual appetite plus the long-rumored homosexual affairs of his brother, Philippe I, Duke of Orléans. One of the key relationships is the triangle between the King and his brother’s wife, Henrietta of England — it was suggested that her and Philippe’s first child, Marie Louise, was actually fathered by Louis XIV (although Philippe did have three more children and founded both the House of Orléans and the House of Bourbon). Anyway, there’s legit historical anecdotes for all the sexytimes Versailles will focus on.

But what else can we expect from this 10-part show? Frock Flicks is planning a podcast and some in-depth articles about the costumes and such, but let’s just start with the basics, in case you’ve missed out. Make sure to click all the links if you really want to prep for this crazy thing. 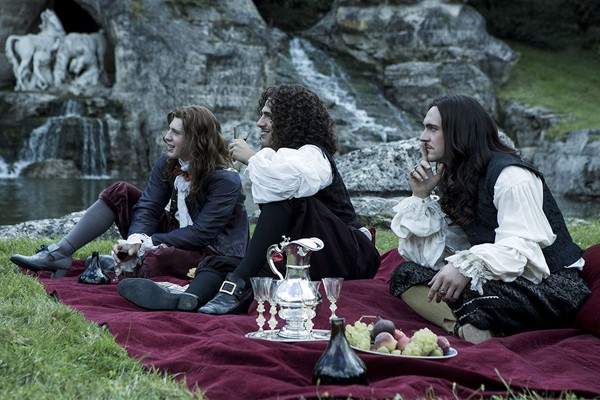 They’re fairly unknown! Unless you’re deeply familiar with British and Canadian soap operas and teen shows (Degrassi: The Next Generation, anyone?), you probably won’t recognize many of these actors. George Blagden, who plays Louis XIV, had a small part in Vikings for a few years , and Alexander Vlahos, who plays Philippe, was Mordred on the BBC’s Merlin, so yeah, they were working actors. But not household names a la Maggie Smith in Downton Abbey.

2. The Costumes (and the Hair) 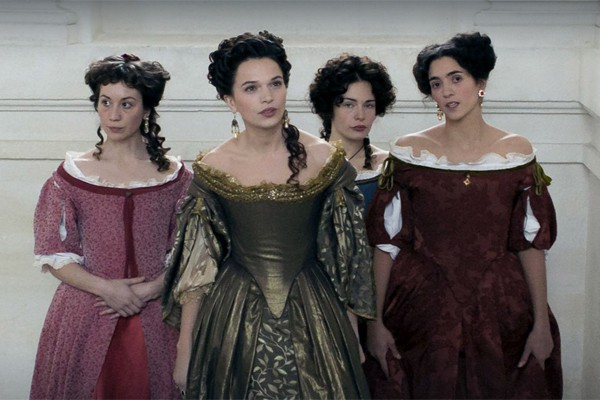 Striving for historical accuracy, but we don’t know what the results are yet! As we reported earlier, the production spent lavishly on the costumes, so they’ll at least be shiny. Costume designer Madeline Fontaine told Women’s Wear Daily that she and her team made about 100 of the costumes for the principle actors, and she had costumes for the extras farmed out. We’ve already spotted some recycled costumes too. Each costume required a great deal of yardage, which was problematic for Fontaine. She said:

“We spent a lot of time sourcing fabrics, across France and Europe. Fabric-makers in France are closing down, so it was hard to find enough. We wanted great-quality fabrics.”

That may account for a few things we see on screen. But she tried not to skimp on the layers. According to the actors, the costumes seemed less-than-modern, FWIW. Said Blagden of his royal robes:

“We were filming outside in summer, it was 27 degrees and I was dripping with sweat. I said to the costume designer, ‘I’m wearing five layers and you can only see two of them. Can’t I take some off?’ She said, ‘No, George. If you do that, the jacket won’t sit right.’ No one was willing to cut any corners.”

Hold on, we’ll be the final judge of that. Oh yes, we will. But you’ll have to wait for our upcoming podcast and articles (there’s 10 weeks of this after all!). I will note that, Blagden / Louis XIV promoted Bumble and Bumble styling products on Twitter for the King’s handsome long locks. #HairGoals 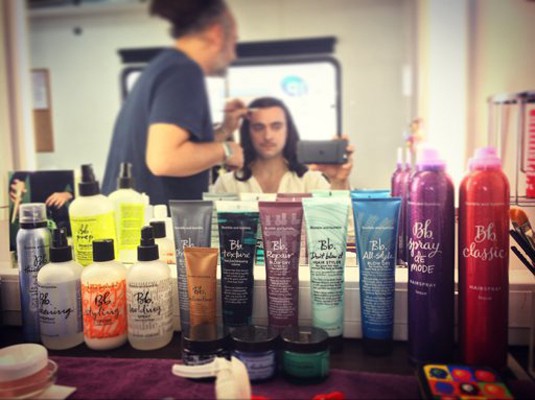 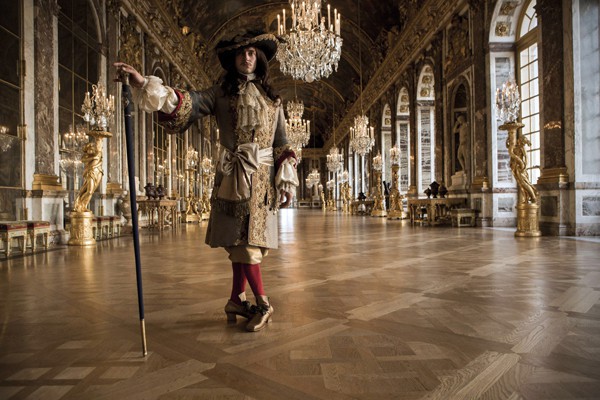 Some of the series was filmed in Versailles itself, such as the iconic Hall of Mirrors, the grand courtyard, and some of the gardens. But, as producer Claude Chelli notes, the palace doesn’t have an especially accurate 17th-century look these days. He blames Marie-Antoinette and said, “She loved flowers so they adorn the walls it’s nothing to do with Louis. So we had to find other palaces around Paris to film in a real 17th-century setup.”

Thus, the bulk of the show was filmed in the more period-appropriate Vaux-le-Vicomte. Some of the big party and dancing scenes were filmed at ballrooms in the very 17th-century chateau Maisons-Laffitte, while the comparatively less impressive Lésigny was used for the lower nobles quarters. Other French chateaus that stood in for parts of Versailles include Pierrefonds, Vigny, Janvry, Sceaux, Rambouillet, and the gardens of Champs-sur-Marne. 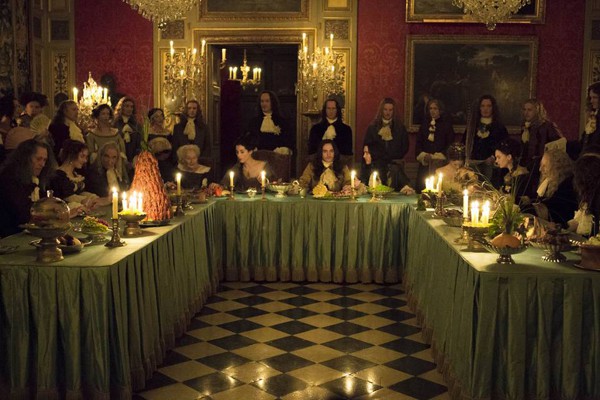 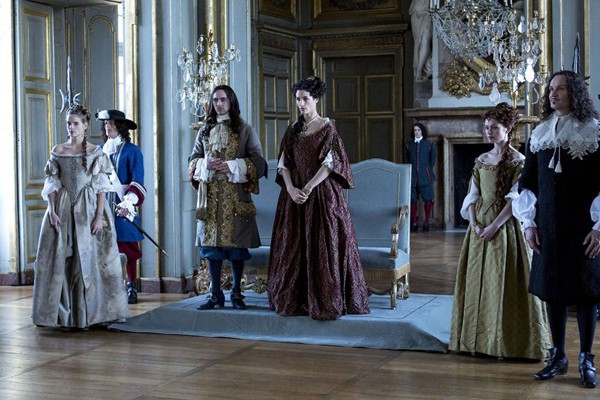 Shades of The Tudors, eek! While all the main characters are legit historical figures and their basic story arcs follow what really happened, “dramatization” seems to have snuck in. Watch out for all these totally made-up villains:

Y’know, there were plenty of real people they could have thrown into the mix, but whatever. If you want to pre-nitpick the history (other than the costumes), the U.K.’s Telegraph runs through Versailles TV vs. history point-by-point.. 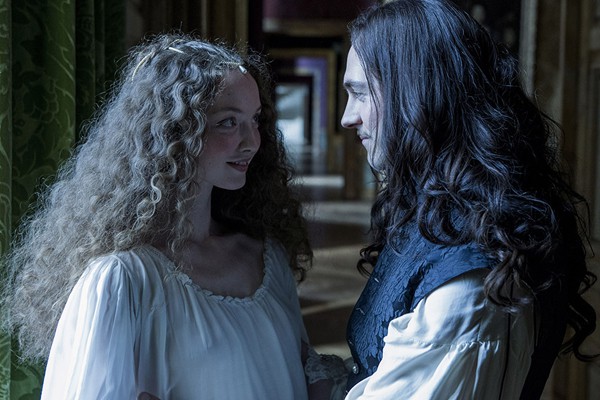 Yep, we’re getting Versailles season one in the states right now, but season two has been filmed, and season three is already commissioned! And after season one airs on Ovation (which is a basic cable channel that you may have otherwise ignored, but I’ve written about here before), Versailles eventually goes to Netflix, which helped fund the production. So strap yourselves in and get ready for more sex and wild hair, baby.

Will you be watching Versailles? Have you already seen it in France or the U.K.?