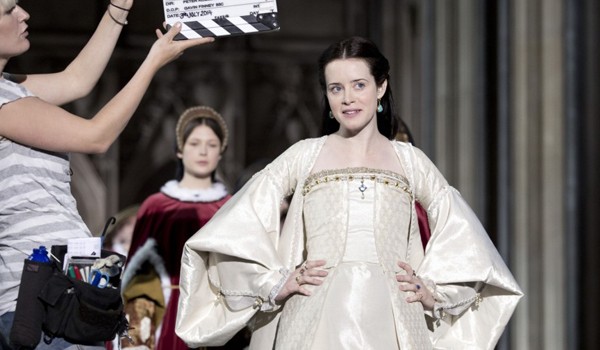 Listen up, Hollywood. You need more films that focus on awesome female protagonists, and I have a list of worthy real women of historical import right here! We love Wolf Hall, but Anne Boleyn is overdone on screen, and so is her glorious daughter Elizabeth I — it’s time for movies about some different, equally amazing 16th-century women. If you’ve watched The Tudors, you know that Henry VIII had a bitchy sister named Margaret (played by the angular Gabrielle Anwar), whom he married off to the King of France Portugal, and she ended up banging a hot commoner named Charles Brandon, who she eventually marries after she murders the French Portuguese king in his sleep, the end. OK, first of all, Henry had TWO sisters, Margaret (who the character is named after, apparently) and Mary. Margaret was married off to the Scottish king, and Mary was the one sent to France to marry the French king, and it was she who marries Brandon. Also, there was no murder. This is why you should never get your history from a TV show. That said, a movie about the actual history of the real 16th-century woman would kick much ass. Let’s review…

Mary was one of the three surviving children of Henry VII, and arguably one of the most beautiful women of her age. Hell, she was allegedly so hot in bed that the aging Louis XII basically killed himself within three months of their marriage trying to produce an heir with the 18 year old. Left a dowager queen without children, Mary pretty much had it made at the age of 18. Her status as a queen of France, her youth, and the fact that she was the favorite sister of the English king, meant that she was still politically important enough to spur the next French king, Francis I, to attempt to marry her shortly after his predecessor died.

However, Mary was a Tudor, and Tudors were shrewd, intelligent masters of working the system in their favor. Banking on the fact that her brother was going to waste little time in arranging another marriage for her, Mary decided to take matters into her own hands and play the wealthy widow’s “get out of a second arranged marriage free” card and swiftly married her brother’s favorite, Charles Brandon, who had recently been created Duke of Suffolk on the condition that he pursue marriage with Margaret of Parma. Obviously, this did not go over well with Henry VIII, and the couple was punished for their insubordination with a cripplingly huge fine and a temporary exile from court. Wrapped up in all of this drama was Mary’s increasing distaste for Anne Boleyn, who had been sent to France as part of her wedding entourage and who was now moving in on her brother. Mary openly opposed Henry VIII’s divorce from Catherine of Aragon, which caused a major rift between the siblings that never really healed.

2. Tullia d’Aragona – The Sun in Her Glory Beauty and brains, what’s not to love? Tullia was alleged to have been the illegitimate daughter of Cardinal Luigi d’Aragona and his courtesan mistress, Giulia Ferrarese. Whatever her true parentage, she was raised in 16th-century Rome and given quite the Renaissance education at the expense of the cardinal who saw to it that Tullia was rigorously schooled in the arts of philosophy and letters. As the illegitimate daughter of a courtesan with a sharply honed intellect, Tullia herself became a courtesan and quickly rose to fame for both her looks and her skill with words (among other things). She lead a highly mobile lifestyle, traveling between the courts of Siena, Rome, Florence, Venice, and Ferrara, all hotbeds of intellectual activity, attracting admirers and enemies the whole way. Her fame paved the way for a later courtesan, Veronica Franco, on whose memoirs the film Dangerous Beauty is loosely based.

Tullia was known to have had a particularly fierce competition with the noblewoman Vittoria Colonna for Italian hearts and minds, and a poem by Benedetto Arrighi commemorates their opposition to one another in both rivalry and style, declaring “Vittoria is the moon, and Tullia is the sun.” Though it’s not certain that either woman met in real life, they certainly sparred with one another through poetry with Vittoria taking a more conventional approach and Tullia a more sensual attack. Obviously, Tullia wins because who doesn’t love a sexy, smart girl willing to throw down with one of the most respected noblewomen of her day? It’s intellectual cat-fight city, ideal for movies about 16th-century women, with plenty of sex thrown in to keep everyone interested between sonnets.

3. Christina of Denmark – I Regret I Have but One Head to Serve My Country

Christina of Denmark, Duchess of Milan, in mourning by Hans Holbein, 1538, National Gallery

It might be hard to see it in this portrait by Holbein, but the 16-year-old widow of the Duke of Milan here, Christina, was considered one of the most beautiful — and eligible — women in Europe. After the death of Jane Seymour, Henry VIII sent his artist to Brussels to paint Christina’s portrait as part of a diplomatic mission to feel out the young duchess on the topic of becoming his next wife. Christina famously laughed at the idea with the following words, “If I had two heads, one should be at the King of England’s disposal!”

In all likelihood, she was well aware of what had become of her great-aunt Catherine of Aragon, Henry’s first wife (honestly, you had to be living under a rock in Europe at that time to not know) and astutely judged that if Henry had no problem with divorcing the aunt of the Holy Roman Emperor, declaring himself Head of the Church of England, and then executing his second wife on obviously thin legal grounds, he probably wouldn’t hesitate to get rid of her in a similar fashion if it became politically — or dynastically — expedient. Yet, Henry pursued her for two more years until Christina’s aunt, the Dowager Queen Mary of Hungary, made it patently clear that her niece was absolutely not going to accept Henry’s offer. The King of England backed off and, two years later, Christina married the soon-to-be Duke of Lorraine, who ironically had been forced back onto the marriage market when his betrothal to Anne of Cleves was broken by her acceptance of Henry VIII’s marriage offer. He, too, dies within a few years of their marriage leaving Christina once more a widow, but this time she’s regent of the Duchy of Lorraine in her young son’s name.

After France invades Lorraine in 1545, Christine is pressured to abdicate and give up her son to France as a hostage. Fleeing to the Netherlands, Christina lays low for another 10 years until she and fellow badass 16th-century lady Margaret of Parma appear in the English court, on a rumored mission to take Princess Elizabeth with them back to the mainland to be married to the Duke of Savoy. Was this going to be a willing abduction or a hostage situation? The world will never know because Christina returned to Lorraine sans one English princess and focused her energy on campaigning for the Governorship and Regent of the Netherlands, a position that her dear auntie Mary of Hungary held and which ultimately went to her ally Margaret of Parma.

Loads of political intrigue! Women in positions of power and authority! A potential kidnap plot to marry the future Elizabeth I to the warrior Duke of Savoy! Where do I sign up for this kind of movie about 16th-century women?

4. Bess of Hardwick – No Lady Better in This Land Whoa, where do I start? Elizabeth Talbot (more famously known by her nickname Bess of Hardwick) is one of those larger-than-life characters in history, whose life and legacy was so monumental that it’s tough to really encapsulate it in one take. A striking redhead (so you know Kendra will be all over this), Bess was born around 1527 into a large well-to-do, but relatively minor gentry family in rural 16th-century Derbyshire, England. Almost anyone born into her circumstances at that time would have had it pretty good, all things considered, just living out their lives comfortably on the family lands. Maybe someone in the family would get a knighthood, or be appointed to the household of the local nobleman, but nothing on the order of magnitude of what Bess managed in her lifetime.

Through a succession of four increasingly advantageous marriages, Bess rose from daughter of a gentleman farmer to Queen Elizabeth I’s lady in waiting to the Countess of Shrewsbury, managing to establish the future Cavendish line of Devonshire dukes which is still going strong today, as well as being entrusted by Elizabeth I to oversee Mary, Queen of Scots, during her 15 year English imprisonment. Bess and Mary formed something of a friendship while the Scottish queen was under Bess and her husband George Talbots’ watch, and the textile collection of Hardwick Hall contains many embroideries and tapestries that the women worked on together.

However, being that Bess was ambitious, she increasingly ran afoul of Elizabeth as her dynastic pretensions escalated. Among other things, she found herself grandmother to a legal claimant to the Scottish and English thrones, one Arbella Stuart, and that realization lead Bess down a path that estranged her and Elizabeth I when Arbella was covertly married to another claimant, the future Duke of Somerset. Additionally, she became embroiled in a feud with her husband whom she suspected of having an affair with Mary, Queen of Scots, even going so far as to allege that Mary had born two illegitimate children fathered by the Earl of Shrewsbury during her imprisonment. Marguerite was given a strong classical education. After her brother became king, she married Charles IV of Alençon, remaining at court and serving as its shadow queen and intellectual leader in place of her sister-in-law, Queen Claude. She was known throughout Europe for her salon (through which she encouraged many writers and artists, including Rabelais) and her own writings. Under her leadership, the French court became a center for intellectualism and art, and debate was encouraged. She advocated reform of the Catholic church (although she was not a Calvinist). It’s quite possible that she shaped Anne Boleyn‘s education when Anne was at the French court. She wrote a collection of short stories, the Heptameron, which is considered a classic, as well as numerous works of poetry. And she participated in the intellectual debate-by-correspondence that was engaged in by all the leading thinkers of the era, exchanging letters with Erasmus, John Calvin, Vittoria Colonna, and more.

In addition to being an intellectual giant of the era, Marguerite was involved in high-level diplomacy. She negotiated the release of her brother, King François I, when he was held captive by the Hapsburg emperor. She later harbored evangelicals (including Calvin) in her chateau in the southwest of France. She also represented France in negotiations with Henry VIII’s ambassadors.

Marguerite became queen of Navarre by marrying Henri II. At that time, Navarre was an important independent kingdom in between France and Spain (it’s now located in northern Spain, right along the border and near Basque country). However, the country had been occupied by Spain, and Henri tried to retake the country. Thus, Marguerite continued to frequent the French court and participate in its intellectual life.

So, you’ve got a brilliant woman, highly placed in the French court, who hangs with (and shapes) Anne Boleyn, marries twice, becomes a queen of an occupied country, and who harbors intellectual renegades. What’s not to love?

OK, Hollywood, no more excuses, it’s time to show one of these fascinating women some screen love!