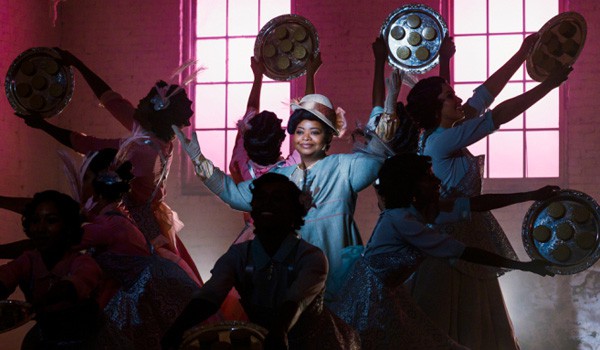 We know about some historical movies and TV shows premiering this year — Sandition is already on PBS (and ripe for snark!), the long-awaited Miss Fisher full-length movie (yes, we’ve heard of it) is coming to the big screen next month and then to Acorn TV, and literary retreads Emma and David Copperfield are headed to theaters in spring/summer.

But is anything new and interesting on the frock horizon? We’re always updating the upcoming movies list, and so many titles have vague or no dates because filmmaking is a flakey business. So here are five frock flicks tentatively scheduled for 2020 that I really hope do happen. Per IMDB: “1840s England, an infamous fossil hunter and a young woman sent to convalesce by the sea develop an intense relationship, altering both of their lives forever.”

Kate Winslet stars as Mary Anning, a British fossil collector and palaeontologist, and Saoirse Ronan co-stars as Charlotte Murchison, a geologist married another (obviously famous because he’s male) geologist. The film seems to include a romantic interest between Mary and Charlotte, and I’ve no idea if there’s any historical basis for it, but I’ll reserve judgement until I see more. Costumes are by the excellent Michael O’Connor, so even though it’s the sometimes dorky-looking 1840s, I’m sure everything will be spot-on. The film’s status is still listed as “post-production” with just “2020” as the release date. Per IMDB: “A royal woman living in rural Austria during the seventeenth century is forced to choose between her own personal happiness and the future of Russia, when she marries an Emperor.”

Catherine the Great is on a lot of people’s minds, eh? When I first read about it, this Hulu series sounded like Reign gone Russian, and I am HERE for that! I loves me a trashy historical soap opera. Elle Fanning plays Catherine, and Nicholas Hoult is Peter, so Hulu is doubling down on the pretty faces. Costume designer Holly Waddington’s only other major credit is Lady Macbeth (2016), which I hated the story but those costumes looked sharp. There are some really crappy Daily Mail behind-the-scenes shots out there online, but I think this press photo of Fanning and Hoult gives a better hint at what the costumes might look like. Per IMDB: “The inspiring story of trailblazing African American entrepreneur Madam C.J. Walker who built a haircare empire that made her America’s first female self-made millionaire.”

An actual release date was just announced for this four-part miniseries, so it’s less of a ‘hopefully coming’ and more legit, but I’m leaving it on my top five because I’m excited about the story. Octavia Spencer stars as Sarah Breedlove, aka Madam C.J. Walker, and Blair Underwood is featured as her husband  C.J. Netflix has assembled some major acting chops for this period piece, so I have high hopes this will do the story justice. IMDB doesn’t list a costume designer, but the promo pix look decent so far. Per IMDB: “Series inspired by ‘Penny Dreadful, set in 1938 Los Angeles, exploring a mix of supernatural and reality with characters connected to the deity Santa Muerte and the Devil.”

I adored the original Penny Dreadful, and while much of that was due to the Victorian gothic aesthetics, I’m intrigued by the Mexican-American flavor of this new series, given that I’ve lived in California most of my life. Frock flick fave Natalie Dormer plays a “shape-shifting hell queen” called Magda, which sounds fun! No costume designer listed on IMDB yet. Per IMDB: “A story of the scientific and romantic passions of Marie Sklodowska-Curie (Polish scientist) and Pierre Curie, and the reverberation of their discoveries throughout the 20th century.”

I tried to watch the 1943 Madame Curie biopic starring Greer Garson and was sorely disappointed, so I have high hopes for this one. Rosamund Pike stars, while Sam Riley plays Pierre Curie, and the costume designer is the amazing Consolata Boyle. It has to at least look good, right? The film festival reviews were pretty decent, but still no wide release date.

What frock flicks are you hoping come out this year?