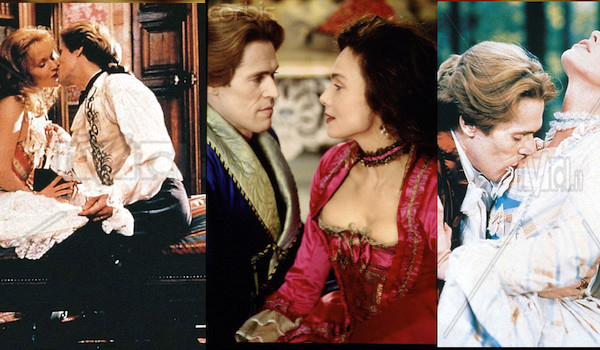 I had never heard of The Night and the Moment (1994) until scrolling through Netflix last night, but as soon as I saw it I said, “aha! 18th-Century Quest!” and hit play. The film stars Willem Dafoe and Lena Olin as 18th-century French aristocrats. Dafoe tries to seduce Olin’s character by telling her stories of past loves, interspersed with a lot of flirting. It was obviously supposed to be in the vein of Dangerous Liaisons (1988) and (particularly, given its upbeat mood), Valmont (1989) — 18th century, aristocrats, worldy seduction, what more could you want, right?

Well, how about a lead actor who doesn’t look like a serial killer? I’m sorry, but Willem Dafoe is NOT a Casanova. Talented he may be, but I kept expecting him to turn into a vampire. 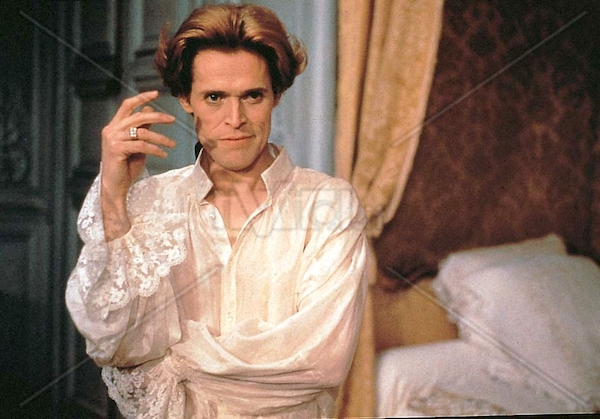 Willem is contemplating which of your organs to have for dinner, I’m sure of it.

Lena Olin wasn’t bad, but she was very clearly channeling both Annette Bening and Glenn Close, and there was a lot of hair throwing and throaty laughter. 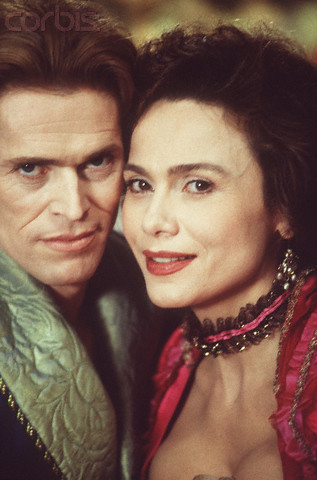 Miranda Richardson plays a supporting character and is the one breath of fresh air. 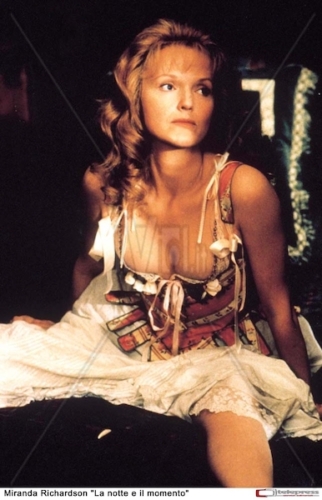 Thank god for Miranda … minus the bangs, which we’ll come back to!

There’s a lot of similarities to Dangerous Liaisons, especially given that both are taken from 18th-century French novels, this one written by Crebillon. Part of the problem with the film lies with how self-consciously everyone tries to be Sophisticated(TM), aping the knowing repartee that came so effortlessly in Dangerous Liaisons. Another part of the problem lies in the whole “storytelling” frame: The plot jumps back and forth from different stories, not all of which are fascinating. For example, one of the major stories has to do with Dafoe’s character being imprisoned. In the next cell is a mysterious masked woman with whom he falls in love. There’s a long scene where the governor of the jail pointlessly explains and demonstrates no-longer-used torture devices for an unnecessarily long time. 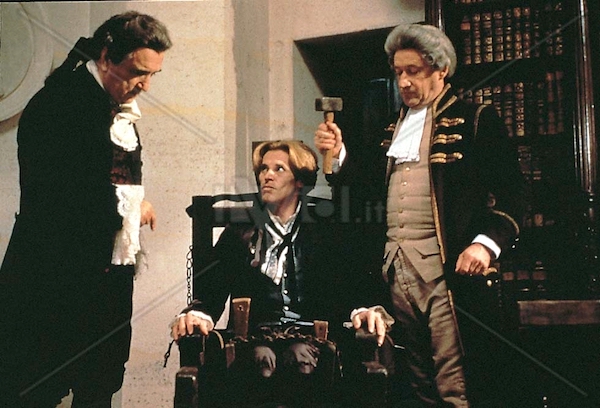 Let’s spend 10 minutes on this, even though it has no relevance on the plot whatsoever, shall we?

The only part that’s really any good is when Dafoe’s character seduces Miranda Richardson, who is interested in science. It happens on a very hot day, and she argues with him that heat “slows the blood” … and he aims to prove her wrong. This all happens on a chaise lounge where Miranda is wearing this: 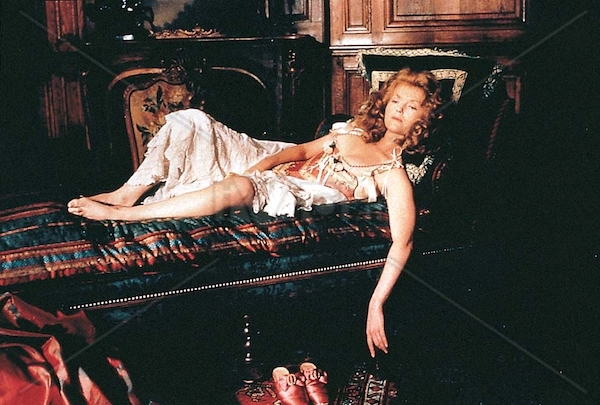 Dafoe DOES prove her wrong, and Richardson has hilarious reactions as she’s clearly mentally taking notes on the experiment.

The film tries to be eroTIQUE without going for full-on shagging. There’s a lot of kissing and fondling of cleavage, while the owner of said cleavage throws her head back and moans. 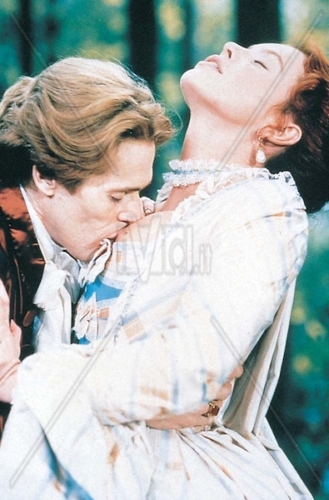 During the final “sex” scene, it’s a lot of leg/butt fondling shots underneath the sheets, which sounds like it could be interesting, but isn’t. Nothing in this film is going to be a contender for the Top 10 Historical Costume Movie Sex Scenes, that’s for sure. 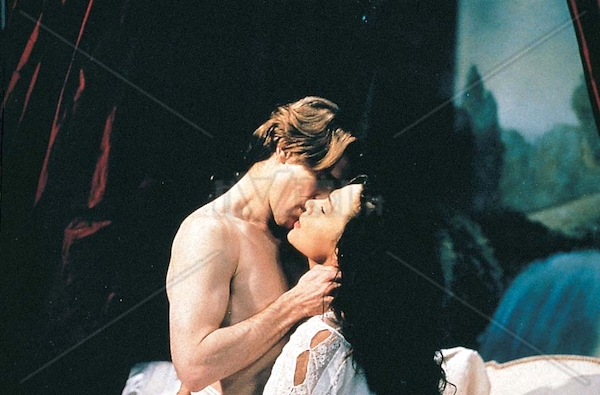 Now, on to the costumes, which were designed by Gabriella Pescucci, who also designed Penny Dreadful (2014), The Borgias (2011), Dangerous Beauty (1998), and The Age of Innocence (1993). Importantly, she worked with the famous Tirelli costume company (based in Italy) to make at least some of the costumes, and they make good stuff. You could tell things were well made and certainly beautiful, they just weren’t 100% accurate. And I wonder if Tirelli was involved at all in Valmont, because I got a very similar vibe, and spotted at least one dress that was originally in Valmont and reworn in this film.

For about 50% of the film, Dafoe and Olin are shown in deshabille as they banter in Olin’s room. Dafoe wears a very 19th-century style robe, although I did like the colors (dark blue with green trim): 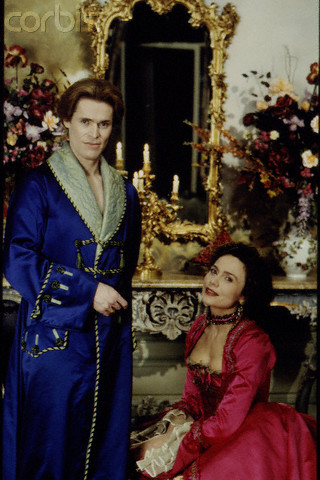 Olin wears a very stupid Laura Ashley-style white nightgown with too much lace. 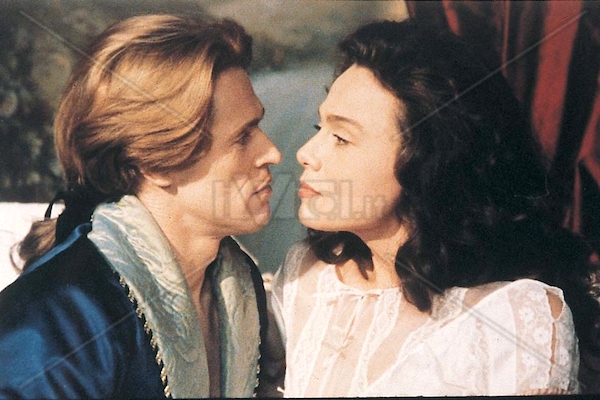 Luckily, the various stories include people in clothes, though, so there’s still something to look at! In general, I’d give the rest of the costumes a sold B.

Lena Olin’s main dress was a fuchsia number that was VERY pretty: 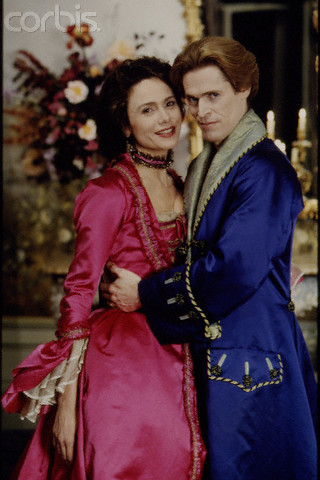 Great color, and I liked how most outfits featured the very-typical-of-mid-century lace/ribbon chokers. For some reason, the sleeves were too long on a number of dresses, this one included — they should stop at the elbow, and then the ruffles hang from that point! Image by © Richard Melloul/Sygma/CORBIS 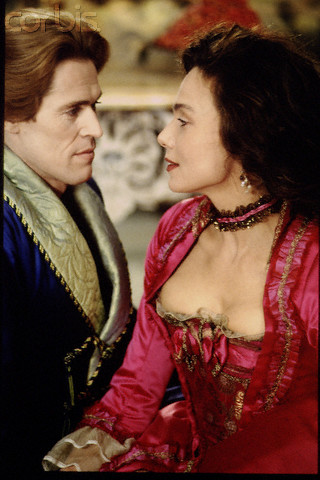 The serpentine, layered trim is nice, and I like the stomacher trimming. Image by © Richard Melloul/Sygma/CORBIS 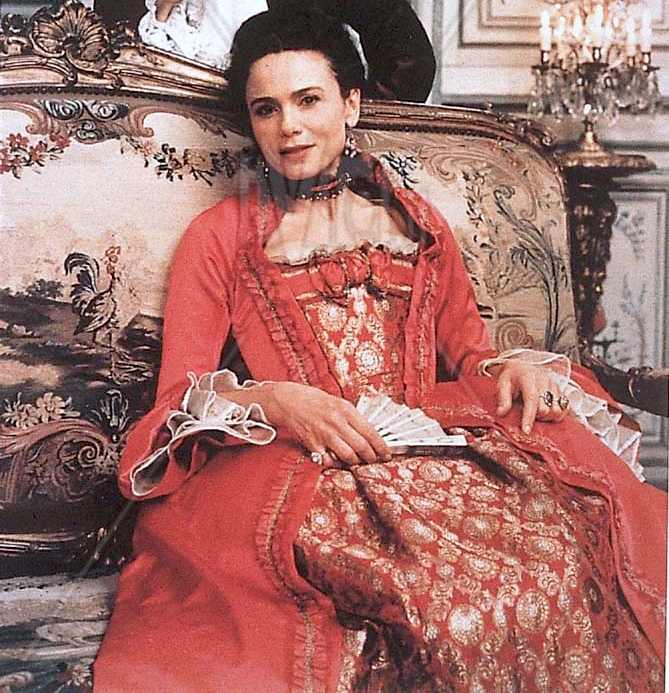 Here you can better see the stomacher and petticoat fabric, although why the dress looks red here I don’t know. 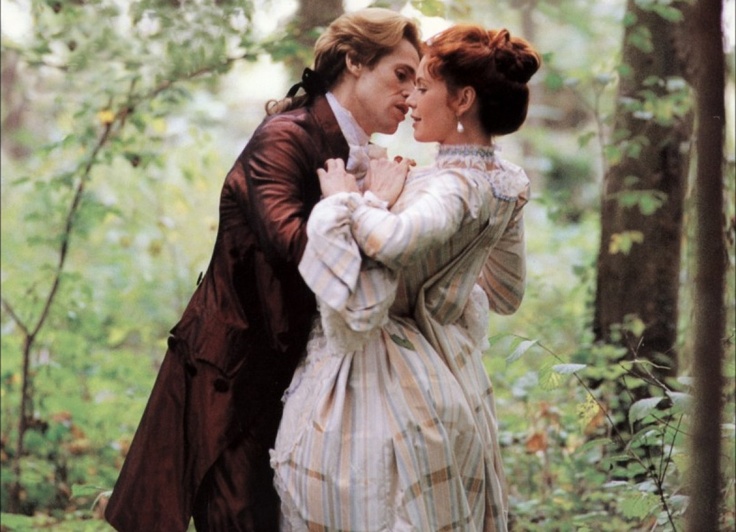 This stripey robe à la française was very pretty, minus the too-long sleeves and… 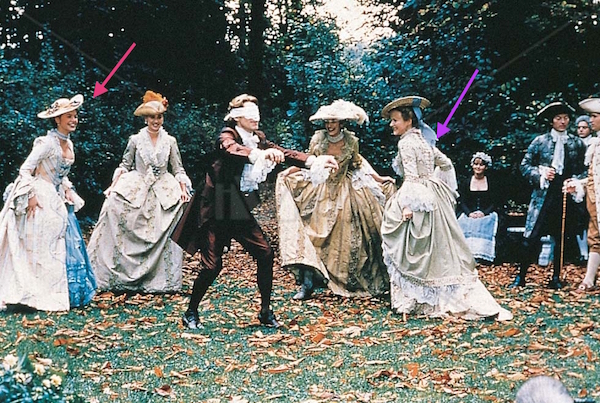 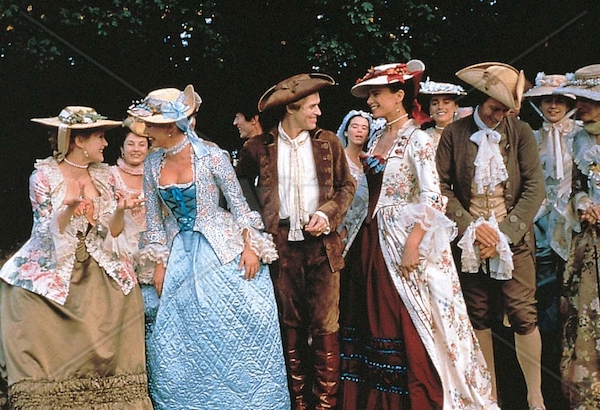 Lots of nice jackets and gowns in here. I like the menswear-inspired collar on the red dress on the right-ish, although I question whether it really works with that style of dress. However, WHAT IS WILLEM WEARING? Some kind of suede suit??!! 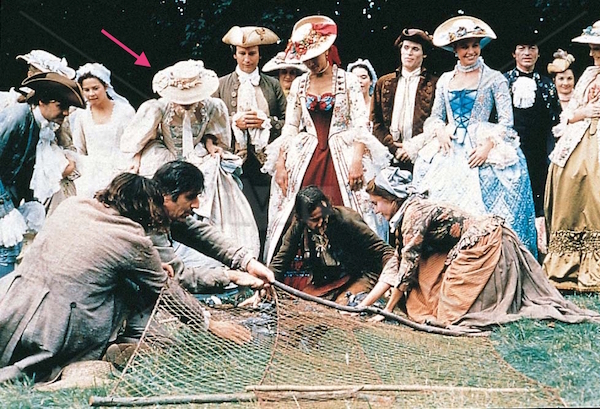 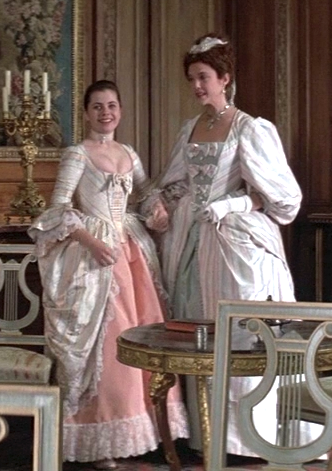 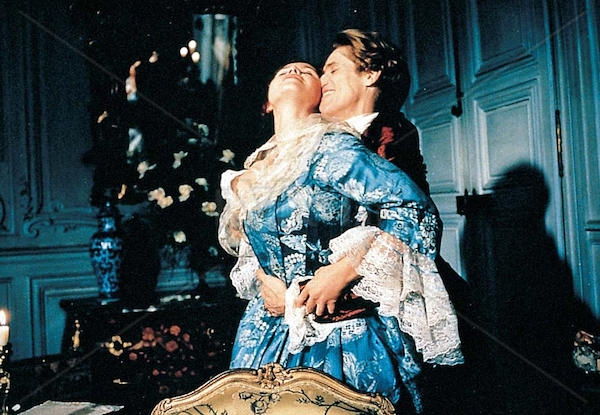 I like the fabric on this blue dress, although I’m not totally sure about the bodice seaming. 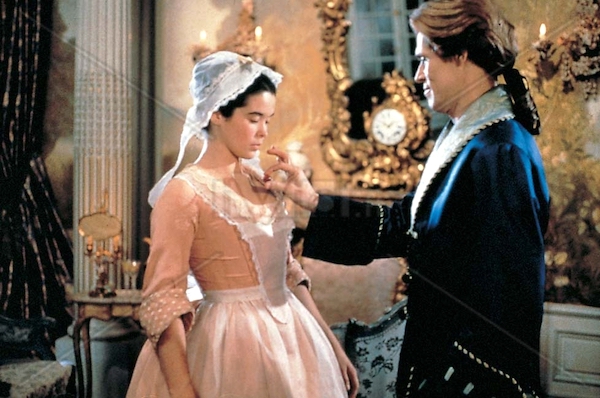 Supposedly these two dresses were worn in the film too — they came from the Tirelli costume company’s website: 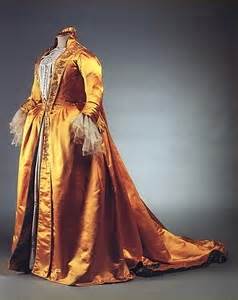 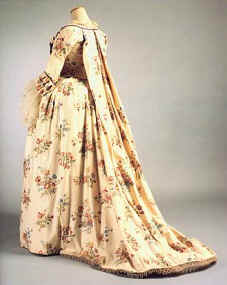 The biggest problems I had were hair-related (you’re surprised, aren’t you?). Miranda Richardson rocked BANGS: 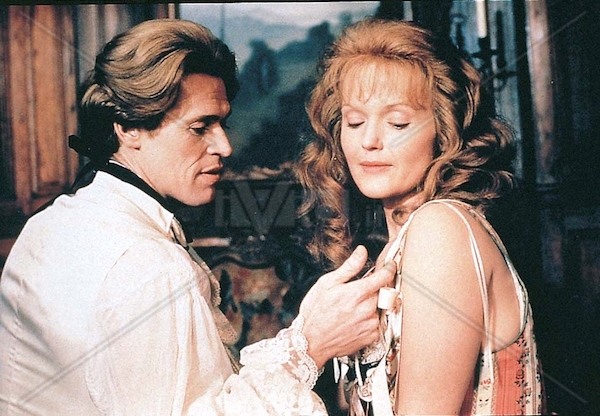 And while I LIKE the fabric of her stays (corset), it’s not really a fabric that seems stays-appropriate. But whatever. BANGS.

But far more offensive, because I had to look at it for so long, was Willem Dafoe’s hair. I can live with the fact that he wasn’t wearing a wig or powder in an era in which his character SO would have. But he had it long in back in a queue (very good), but waaaay too long on the sides in this weird, demonic version of the Dorothy Hamill (famous 1970s figure skater) wedge cut:

Let’s look again at that image of Willem above, where his hair FLIPS UP AND MAKES KENDRA CRY:

WHY DO YOU MAKE KENDRA CRY, WILLEM?

So, yeah. Maybe give it a whirl if you’re a big fan of Willem Dafoe? Or a completionist like me?