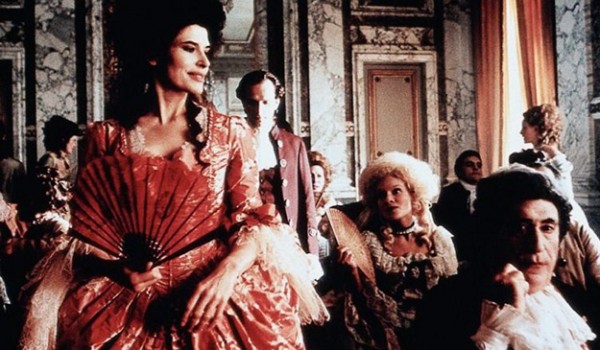 However, this is his Court Suit (on the left) that he his mentor has made for him, and other than being nicer fabric, it’s pretty unexciting. Moire. Woo | (c) Miramax The Abbé de Vilecourt is Ponceludon’s main rival. I like that they show just how worldy priests could be in this period, and his outfits worked for me. What the hell is the woman on the back left wearing, though? Despite a scene in which Fanny Ardant is stark naked in order to be powdered by her servants, she wears her own brown hair color throughout the film… until this weird, two-tone wigs show up. WHAT THE ACTUAL HELL IS GOING ON HERE. Occasionally you see real 18th century hairstyles where there’s more powder around the face, and so the hair is lighter there, but never the reverse, and NEVER this stark contrast.