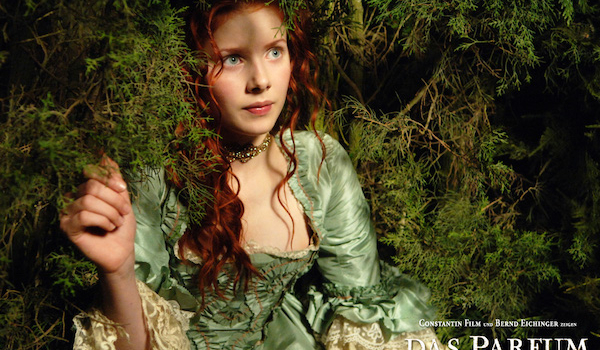 I will completely admit that I put off watching Perfume: the Story of a Murderer (2006) until a few weeks ago. Lots of people were excited when it first came out, and while I was vaguely intrigued by a few of the costumes, I was put off by the idea of watching a movie about a guy who was going to go around sniffing and murdering women. It sounded very Silence of the Lambs, 18th-century-style, which just isn’t my bag. But now that I have this quest to watch “every” 18th-century movie out there, I decided it was time to fire it up.

Overall, yes, there is definitely some gross elements to this, and some unattractive focus on sniffing, and views of the seedy side of the 18th century. On the other hand, it’s not scary or disgusting. The film is well made, and the story is interesting enough. So, I admit, I was probably silly to avoid it … but I don’t know if I’d watch it again! 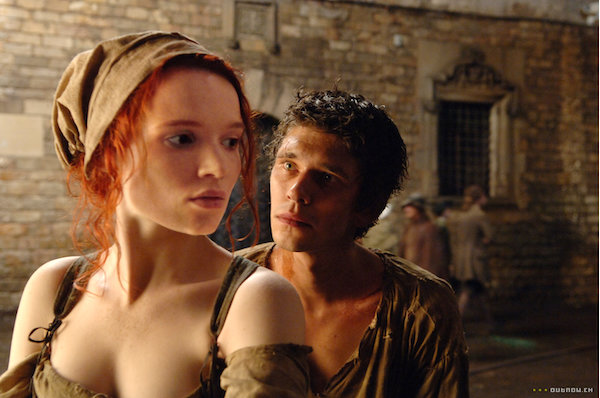 There’s nothing creepy about a guy quietly standing behind you and smelling you. Not at all.

The story is set in mid-18th-century Paris and concerns Jean-Baptiste Grenouille, who is literally born in filth but with a super-human sense of smell. He trucks along in life until he discovers perfume and the lay-deez (okay, their scent more than anything else). He manages to apprentice himself to a perfume maker and, as the title implies, also starts killing people — women, specifically, in an attempt to capture their scent. Later, he goes to Provence in an attempt to further improve his scent-capturing abilities, and things go downhill.

There are a couple of big name performers — Dustin Hoffman plays the perfume-maker who takes Jean-Baptiste on as an apprentice, and Alan Rickman is the Provencal town official whose daughter becomes Jean-Baptiste’s obsession. I particularly enjoyed Hoffman, mostly because they did a great job putting him into 18th-century-appropriate makeup: 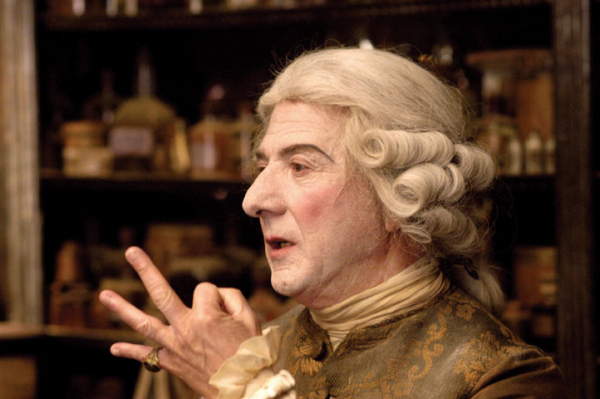 Dustin rocking the powder and paint. 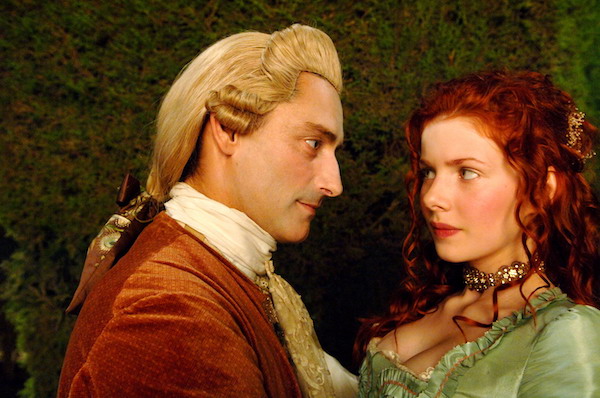 The slightly ominous marquis — check out the very obvious wigline around the face and the dark hair showing in back. Both are very historically accurate! The peacock wigbag, not so much. 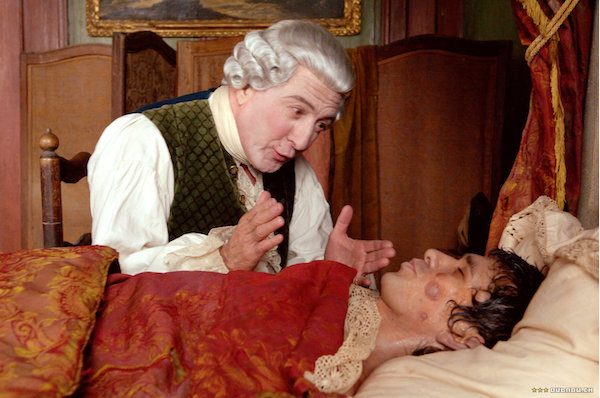 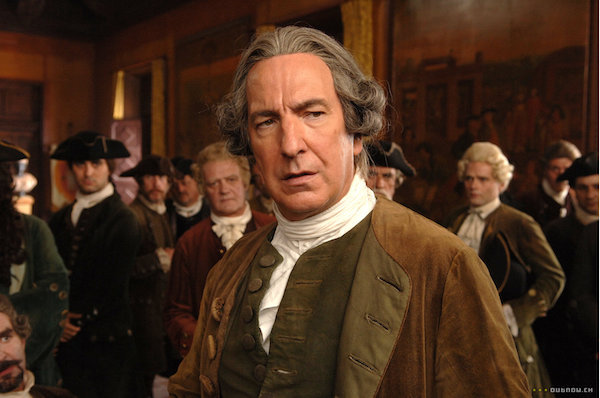 Alan in a nice grey wig with two buckles (side rolls).

You can guess that I rolled my eyes at the ingenue’s hair. I can accept that if you’re a dirt poor street urchin, there isn’t anything you can do about your red hair: 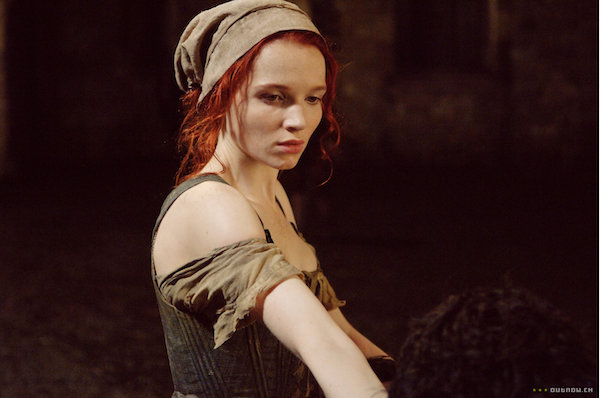 But while it was GORGEOUS, Laura’s red hair was 1) painfully unfashionable and 2) RINGLET-ING ALL OVER THE PLACE. I’m sure they were trying to show that she was natural and innocent and un-artful. 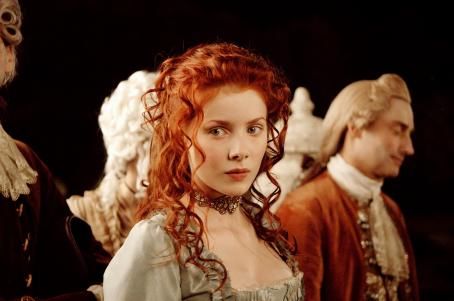 Those are a LOT of (beautiful) very modern ringlets.

Costumes in Perfume: Story of a Murderer

Overall, the costumes were nicely done! I wished Laura (uh, maybe we could call her Laure and have her sound vaguely French?) would have had a few more outfits, but those that she did were very pretty: 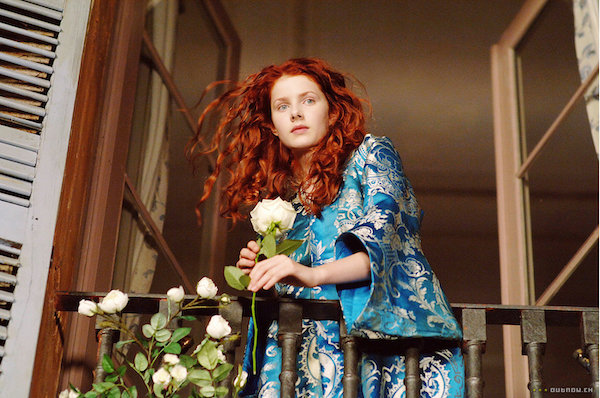 A very nice Orientalist lounging robe or banyan. GREAT color on her! 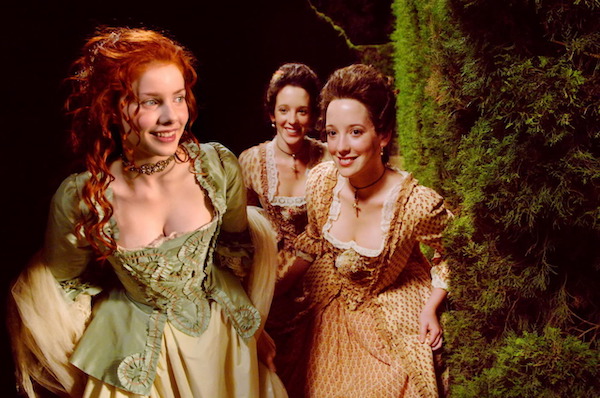 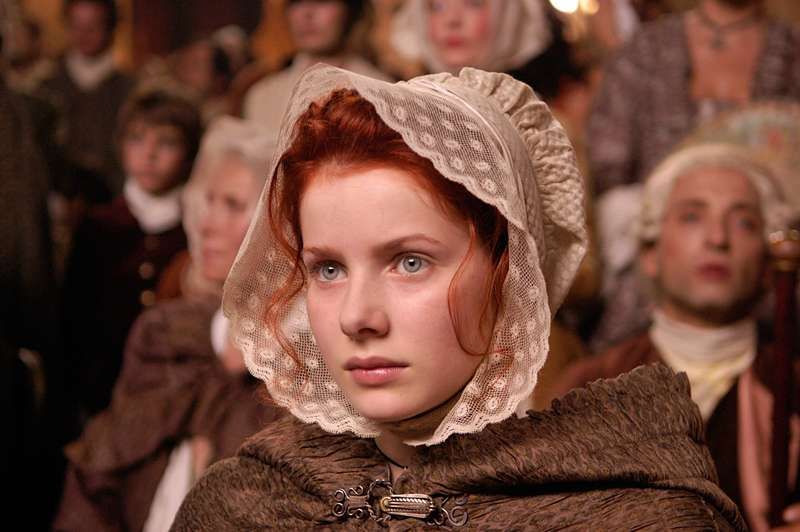 This cap is beautiful and very appropriate to 18th-century Provence. 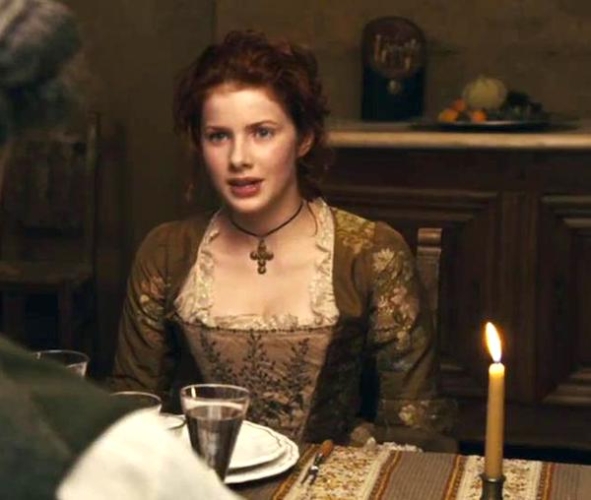 A mis-step — the fabric is fine, but the stomacher is clearly sewn into the dress. I’ll bet there’s some back-lacing lurking in there! It seems like something out of Valmont, although I can’t find it on any of the main characters. 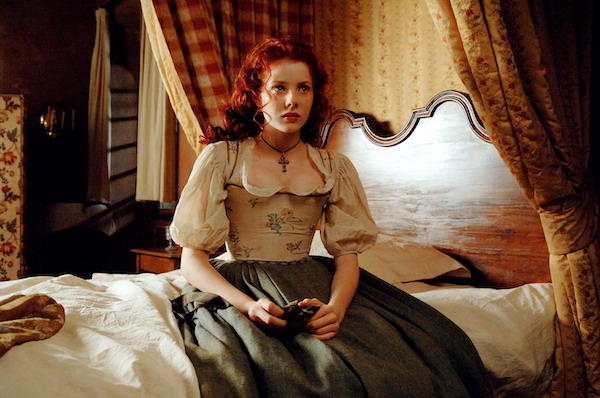 The stays are nice, but what I REALLY liked was the cross necklace, which was an ubiquitous style in the south of France in this era (you can find a bunch of similar styles here).

What got me particularly excited were all the Provencal prints on minor characters and extras. The south of France was a leader in terms of wearing cotton prints, which were imported via the port of Marseille. Many of the prints that we today think of as Provencal can be seen as far back as the mid-18th century in paintings and surviving garments from southern France. It was slightly strange that Laura never wore them, but maybe the filmmakers were trying to show that she was a class above everyone else?

Again, great Provencal cotton prints on the twins on the right. 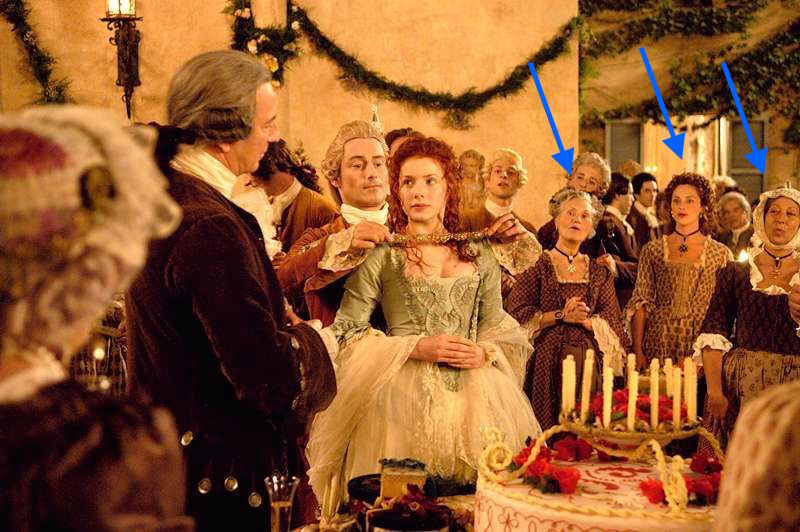 Three ladies in great prints — the one on the far right looks straight out of a period painting. 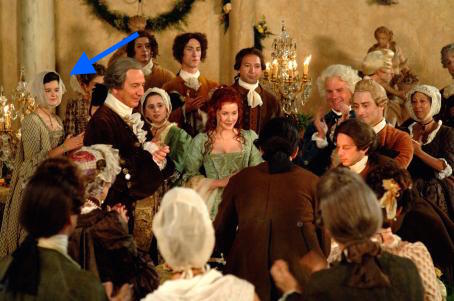 Compare them with a painting by Antoine Raspal, who painted women in Arles (in southern France) in the late 18th century: 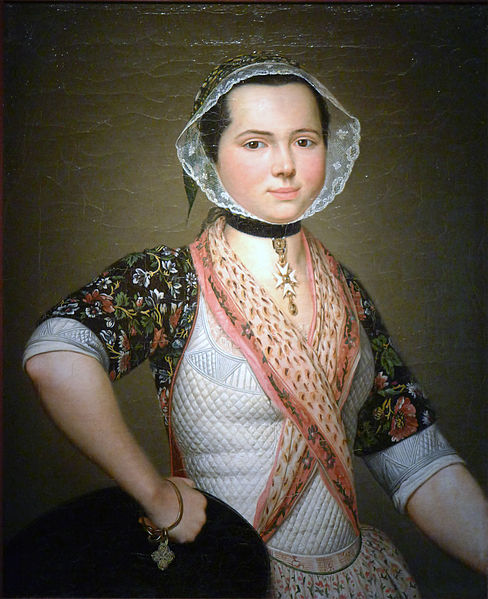 Settings in Perfume: Story of a Murderer

I’ll also add that there was some great scenery and locations. First, check out this great matte painting showing of one of Paris’s bridges: 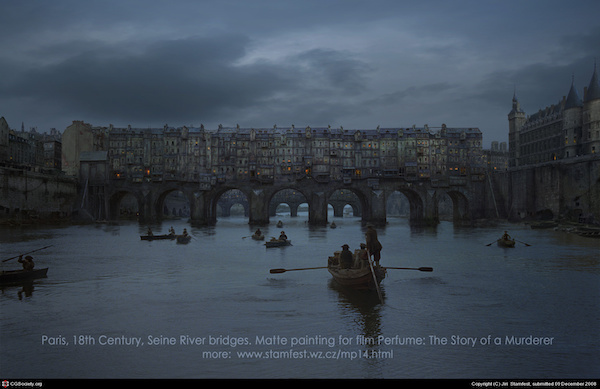 And anyone who has traveled in Provence knows it’s all about the landscape and the flowers and the colors. They had some beautiful shots that really captured that magic: 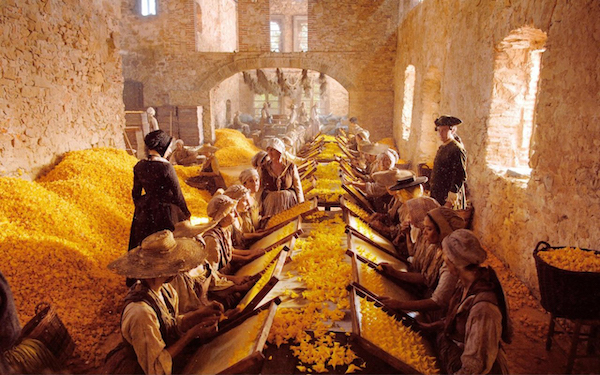 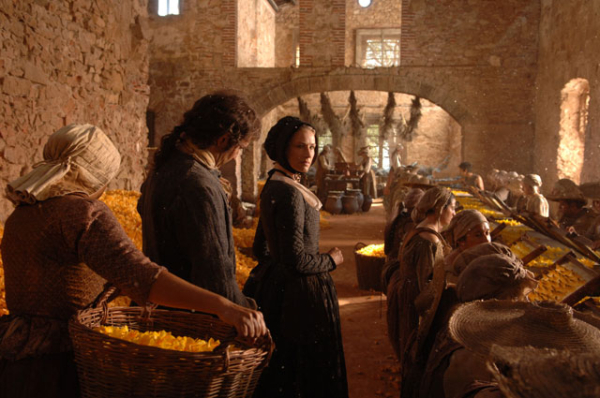 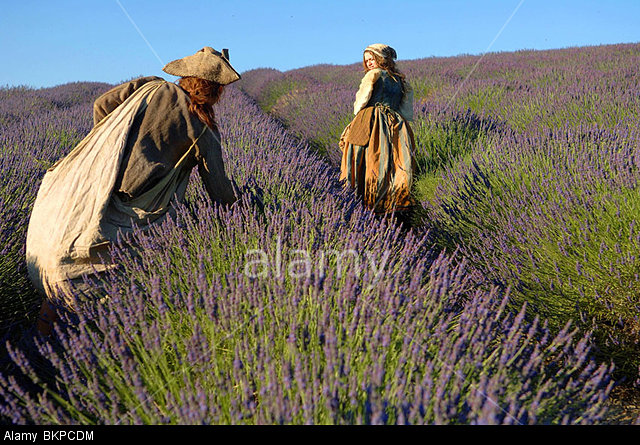 As soon as I saw him/her, I know s/he was done for. 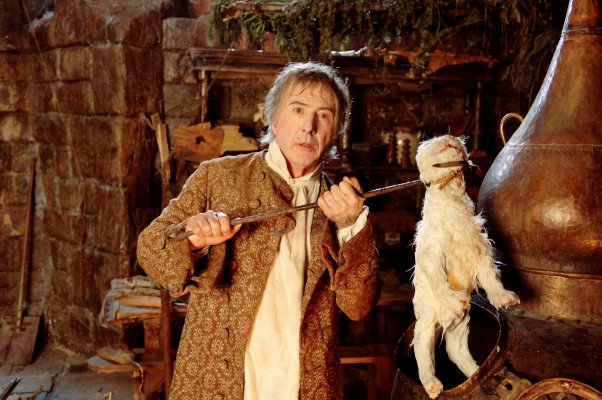 I spent the entire second half of the movie stressing about this poor puppy, and it’s never resolved, and so I am traumatized. 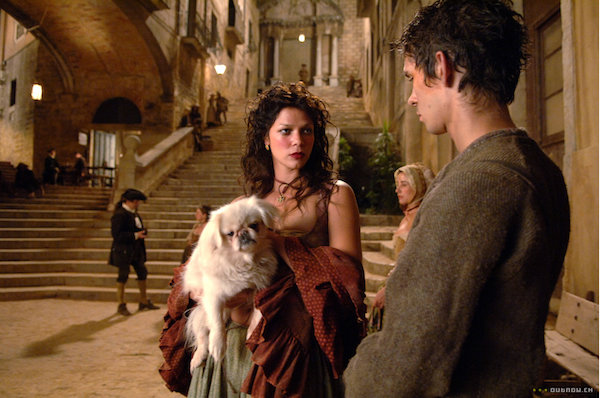 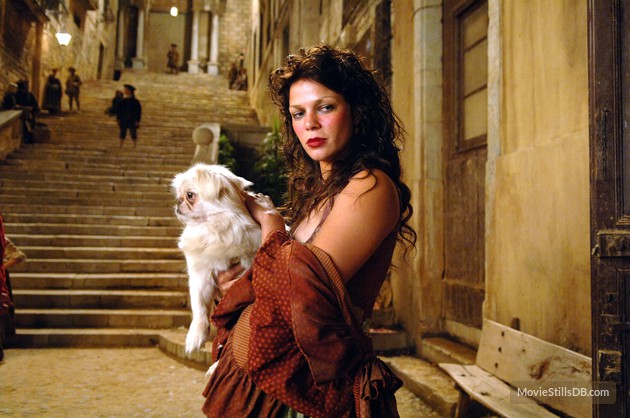