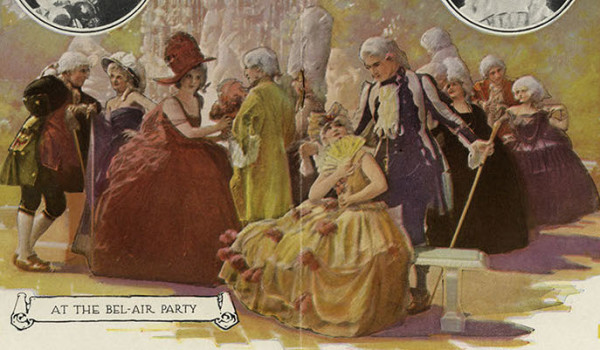 As a connoisseur of all things 18th century, I frequently come across images from Orphans of the Storm, a 1921 silent film starring Lillian and Dorothy Gish and set during the French Revolution. I didn’t know too much about it, but most of the images look fabulous, so I knew I had to watch it as part of my 18th-Century Quest.

The problem, of course, is that silent films can be difficult to watch. The acting and pacing are so different from modern media, that it can feel like work to get through a whole film. In some ways, this held true — I had to split up watching the film into two different viewings (it’s 2.5 hours long), and there were times when I wished that the film would hurry up. On the other hand, I did find the story interesting and was semi-invested in things, so it wasn’t all pain and suffering. So if you like silent film, you’ll LOVE Orphans of the Storm. If you’re not convinced, then just watch the party scene (see the video below).

The film was directed by D.W. Griffith (Birth of a Nation, Intolerance) and is considered his last major box office success. It stars real-life sisters Lillian and Dorothy Gish as adoptive sisters in revolutionary France. The basic set-up is this: an aristocratic woman marries a commoner and has a baby, but her family doesn’t approve. The family kills the husband and abandons the baby girl (Louise) on the steps of Notre Dame. A poor man is planning to abandon his own infant daughter (Henriette) because he can’t afford to care for her. He reconsiders and takes in baby Louise as well to raise. The two girls grow up as sisters, but when they are adults Louise gets sick and goes blind. Hoping to cure her blindness, Henriette takes Louise to Paris … and then things go very, very wrong. And then the French Revolution happens. I don’t want to give away the whole plot, so I’m going to leave it there!

Ah, classic movies, where blindness strikes suddenly and can be easily but mysteriously cured.

I also wanted to mention that the sets were really nicely done. They were built on Long Island, and according to the film’s press kit, “The reproduction of Paris covered 14 acres, the largest studio set ever built. Three of the houses are reproductions from three now standing, past which the death-carts filed over 100 years ago.”

There is a quick shot of the French court at Versailles. The press kit writes, “The room in which the [tiny, hard to make out] King appears is an exact replica in size, paintings and minute detail of the grand salon in the Palace at Versailles. It is the largest room ever built in a studio.” Costumes in Orphans of the Storm

The best thing about this film are the costumes … which, no, of course, aren’t the least bit historically accurate. I admit that I have a soft spot for 18th century reinterpreted through the current era (so long as that era is pre-1970), and I’m particularly charmed by the 1920s take on 18th century. Obviously you have to go into watching this movie knowing that that’s what you’re going to get, and if you’re hoping for anything else, you’re going to be sorely disappointed.

The (uncredited) costume designer is Herman Patrick Tappé. He was a fashion designer who also did some theatrical costume design; Orphans is his only film credit.

Henriette and Louise are dressed identically in the parts of the film when they are together. They’re from a middle-class background (when their father rescued Louise, he found money inside her swaddling), so they’re dressed nicely. Their initial dresses are sort of Snow White meets the 18th century — fitted velvet bodices over short, puff-sleeved blouses; taffeta skirts over side panniers; aprons and knitted gloves (which actually, I want); and Mary Pickford hair with caps and straw hats. Aside from the panniers and the fitted bodices, these dresses seem very “rustic maiden/ye oldey timey,” and nothing more specific.

First, en route to Paris, the sisters meet the Marquis de Praille who immediately gets the hots for Henriette. He wears a really-not-bad ensemble of coat (with fabulous velvet revers and cuffs with huge buttons), stripey waistcoat, knee breeches, and tricorn hat.

De Praille throws a party which is just AMAZEBALLS — it’s basically The Great Gatsby Goes 18th Century. There’s froofy dresses and huge wigs and champagne and laughing and fountains and flirting and all sorts of fabulosity. Of course, the women’s gowns and many of the wigs are completely whack, but if you can keep an open mind, there’s a whole lot of froof to enjoy.

Here’s a pretty clear shot of the mish-mash that is the women’s costumes. They’re big and fabulous if you can handle this sort of thing! The lady on the far right is actually in a pretty decent (if bust-dart-y) française, while the lady on the left is pure 1920s fantasy. We analyzed the hair, by the way, in one of our historical hairstyle posts. I love all the patches. Lillian Gish doesn’t actually wear this on-screen (that I’m aware of — unless they snuck her in, in another role, in the crowd), but it’s a good representation of the kinds of dresses that are worn in this scene. If only her wig didn’t eat her face…

The Marquis de Paille gets an AWFULLY spiffy striped coat!

The film is clearly pre-Code because there are BOOBIES.

More nips on one of the girls frolicking in the (literal) wine fountain. The press kit says, “The fountain of wine is an actual fact, done with the permission of the prohibition agents.”

Moving on … Henriette’s love interest is the Chevalier de Vaudrey, a sympathetic aristocrat. His wig is a good example of the kinds worn by most of the aristocrats in the movie — they’re not too bad, with the exception of the Marcel wave on top, but I admit I find that sweet in a vintage-y way. I love his crescent moon patch. Until during the revolution, when he ditches his white wig for this Bettie Page/Prince Valiant mash-up, which is just Not Flattering. And who, I’ve just discovered, is the same actor who plays the Ponciest Ponce EVER — the Duc d’Orléans — in Marie Antoinette (1938). WHOA. Mind blown!

Other key aristocrats are the Count and Countess de Linières: The count. Nice embroidery on that jacket! And hey, they didn’t do the rows-of-shitty-lace-bib instead of a cravat. The countess. Again, I want the mitts. Notice how Henriette is wearing a cross-over fichu — a nice 18th-century touch.

They have a servant who is the film’s comic relief:

You can tell he’s wacky because of his BIG BOW… But the best is that they wired the queue (tail) of his wig, so it sticks up and bounces around.

However, we also see how the other half lives. Louise falls in with a beggar woman, who dresses very ragamuffin/gypsy style. She dresses up Louise and forces her to beg with her, so Louise goes full beggar too.

The beggar woman has a mustache, which was a hilarious touch.

And when the Revolution gets going, we see multiple revolutionaries. The women all seem suspiciously flapper-esque despite their Phrygian (revolutionary) caps. There’s a whole scene where Henriette gets caught up with a dancing mob, and it’s very interpretive dance. These women don’t show it, but most of the revolutionary women have bobbed hair!

A crowd scene at the guillotine. This must be a behind-the-scenes shot, otherwise why the guy in the boater up on the platform, and the guy with super modern 1920s hair in the bottom right corner? Notice the head-on-a-pike in the crowd in the bottom left corner.

At the end of the film, some indeterminate time after the Revolution, there’s a happy ending with Henriette and Louise reunited. I’m unclear whether these dresses are supposed to be chemise gowns or Regency dresses — they kind of work either way, if you squint! Scoop neckline, short puffed sleeves, full skirts, wide waistbands — could be 1790s, could be 1810s! Who knows! I guess the hair is more Regency?

So, if you’re in the mood for a really vintage take on historical costume, check out Orphans of the Storm for a nice story and some great visuals.