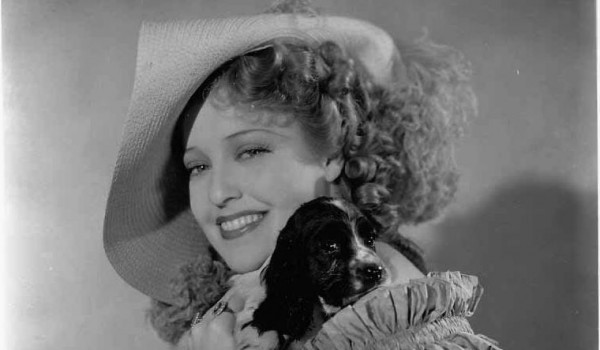 Naughty Marietta (1935), starring Jeanette MacDonald and Nelson Eddy, is about an 18th-century French princess who runs away to Louisiana and hooks up with a crooner/Davy Crockett mashup. I’m serious. There are coonskin caps and fabulous faux 18th-century gowns designed by Adrian. Would I lie about such a thing?

It’s based on an operetta, and so involves singing — you may know “Ah! Sweet Mystery of Life” (“at last I’ve fooooound youuuuu”), which is from this. It also involves Elsa Lanchester as the best-dressed baddie evah. Oh, and there’s a puppy, a lamb, and a squirrel in here, which improves any movie, IMHO.

“Princess Marie” (Jeanette MacDonald) is a French princess who is Down With the People. She doesn’t want to live a stuffy life and instead likes to hang out in the po’ part of town, rubbing elbows with the unwashed masses. 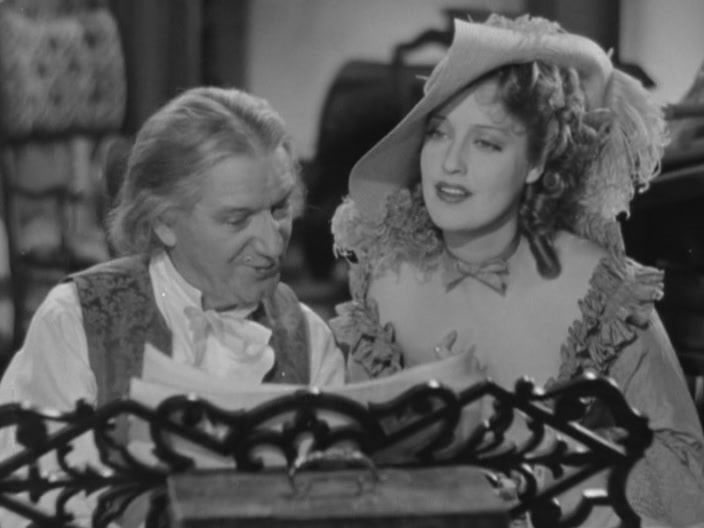 First up, a music lesson… 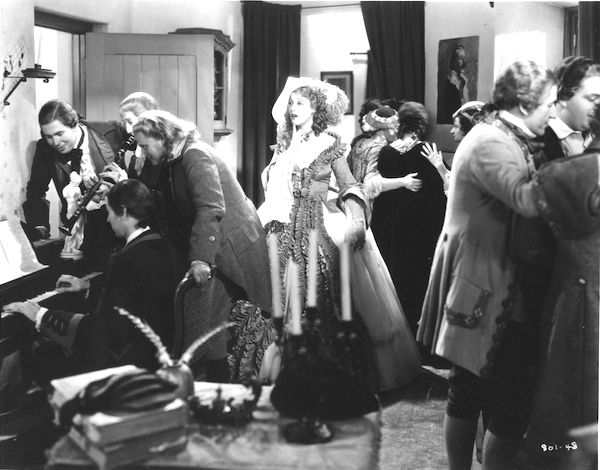 … which turns into Marie, scampering through a tavern and singing with her peeps there… 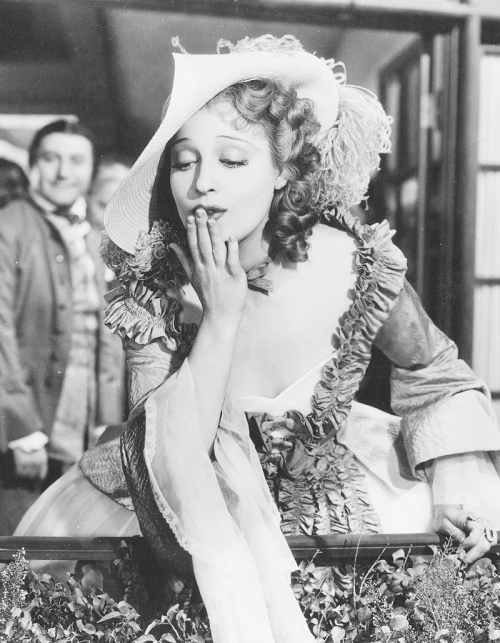 …then opening a window and singing with the crowd, who sing back at her. It’s very Snow White.

Probably the best part of the whole movie is when Marietta’s music teacher gives her a super flopsy PUPPY:

When she heads home, Marie is in for some bad news — she’s an orphan, you see, and she lives with her uncle, and he’s decided to marry her off to an elderly Spanish noble without consulting her. 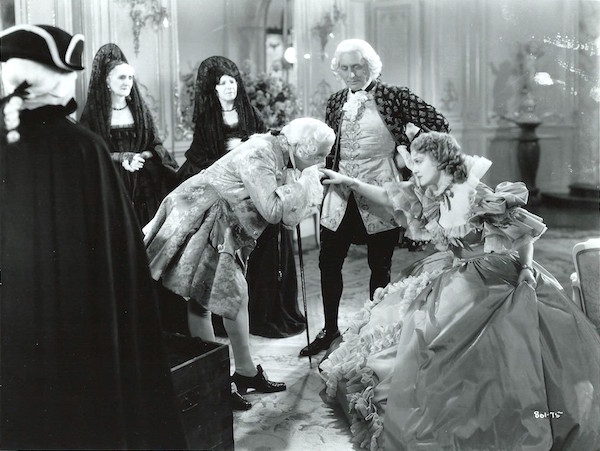 You’re going to be shocked when I tell you that Marie wants to marry for love … and her opportunity comes when her lady’s maid, Marietta, comes by her room that night to say she’s sorry, but she’s moving to Louisiana. See, Marietta is in love and wants to get married, but she and her beau can’t afford it. So instead of doing anything rationale, Marietta decides to chuck him and head to Louisiana as a “casquette” girl — women shipped out to Louisiana to marry whichever raging bag of male hormones is up for it. Marie offers Marietta a solution: let Marie take her place on the ship, and she’ll give Marietta enough money to get married. Done! 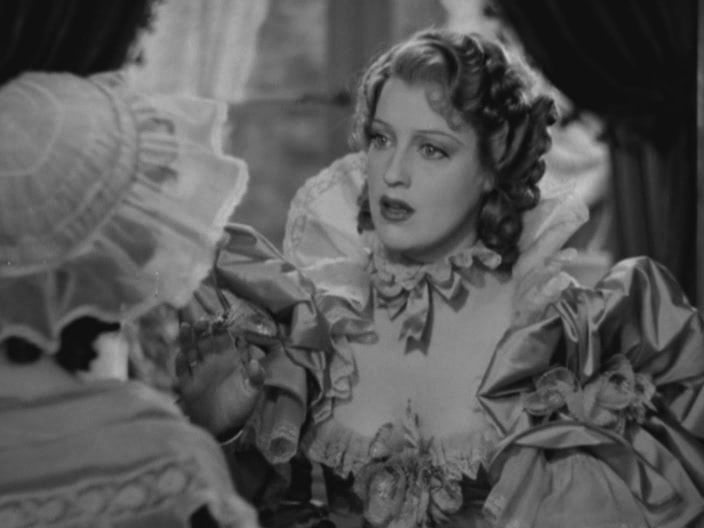 “No, totally, nobody’s going to notice that I’m gone. LOLZ.”

Marie sneaks off to the ship, where her Clever Disguise as Not-a-Princess consists of a mob cap, glasses, and obnoxious chewing:

On board the ship, contrary to the whole general idea of being a casquette girl, she announces that she’s never going to get married. I’m not sure how that works entirely.

Who cares, because when they’re almost to Louisiana, the ship is attacked by pirates! 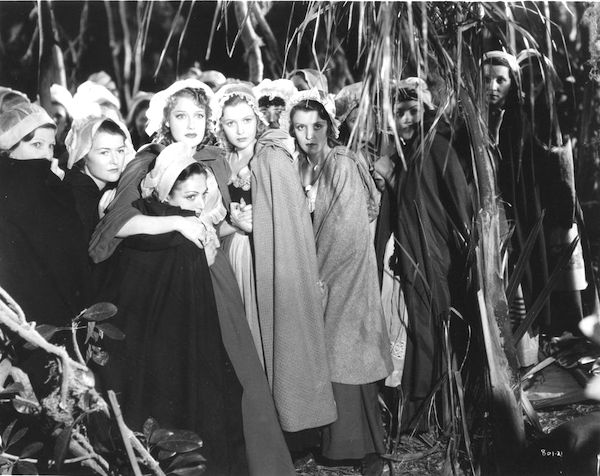 But never fear, Captain Warrington (Nelson Eddy) and his “Yankee Scouts” are here! Seriously people, here he is, arriving in his Davy Crockett gear, with his manly men. I need you to look at this picture, but also while listening to this song: 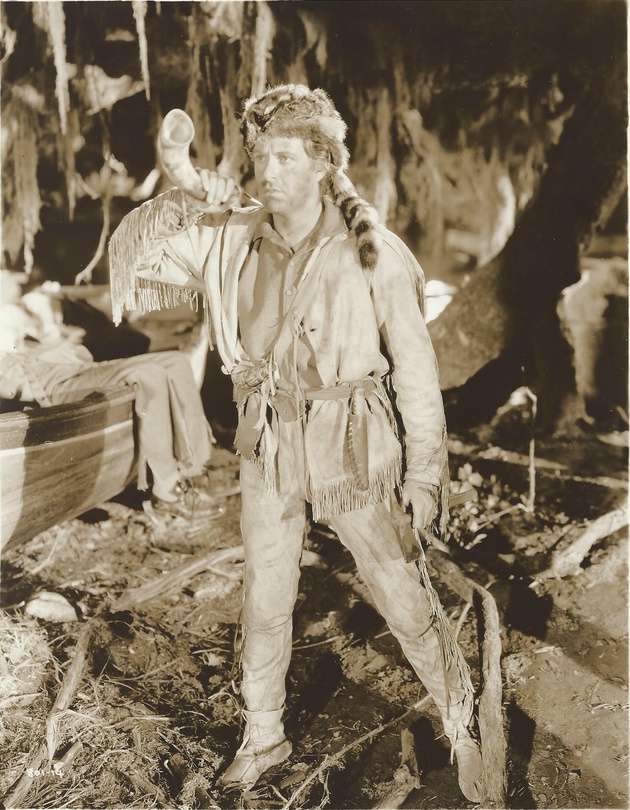 While you listen to this…

Marietta calls for help, and then Captain Warrington (and his men) swashbuckle around, saving the ladies. They then all get to hang out by the campfire while Warrington, king of mixed messages, croons a manly song to the ladies, then acts annoyed when the ladies get all fluttery.

He informs faux-Marietta that he’s never going to marry: 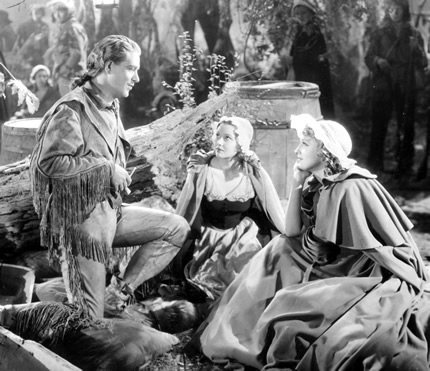 “No chix for me, no sirreebob. I know you want me, though.”

Which, of course, lays down the gauntlet. 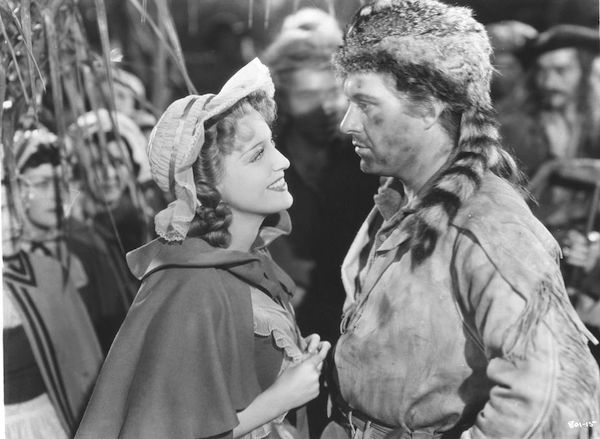 THE SEXUAL TENSION. It can be cut with a coonskin cap.

The “Yankee Scouts” (which, I question: what are Yankees doing in 18th-century, pre-Contract, French-owned, Louisiana? Besides crooning, of course) take the girls into New Orleans, where an old-fashioned meat market takes place. 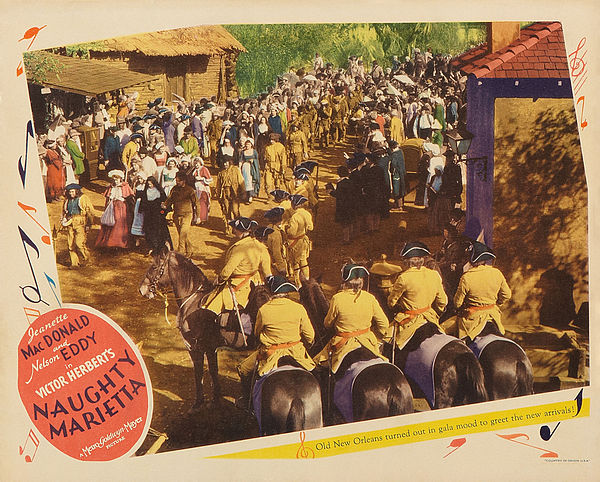 Arriving in New Orleans. Where, apparently, everything is yellow.

First the ladies are taken to a convent, then the local men show up, say “You!” and then bob’s your uncle, they’re married. Except, Marie/Marietta. All the guys are hot to trot, but she’s having none of it, so she informs the governor (who’s in charge of this meat market, and who suspects he recognizes her from back in the day in France) and his wife (played by Elsa Lanchester) that she’s an “immoral” girl. Apparently this is a deal-breaker, because the governor has her hauled off by guards.

The governor’s wife isn’t too happy with pretty Marietta’s existence, but why I have no idea, given that she is wearing THE BEST STRIPEY DRESS EVER CREATED. 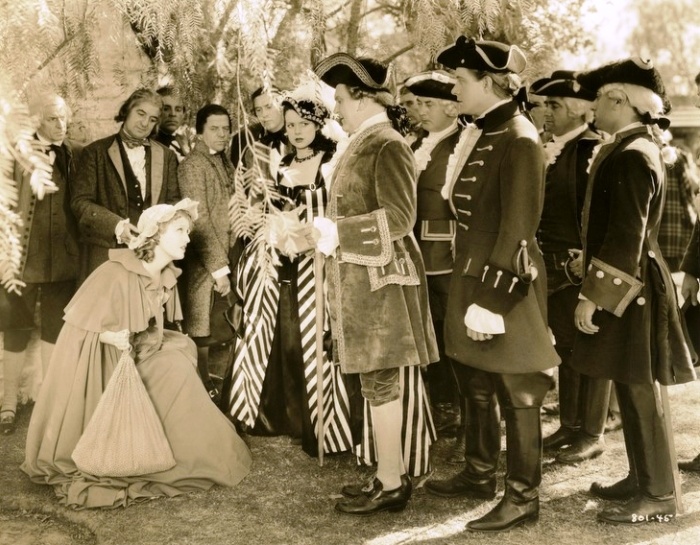 Yeah yeah, she’s “immoral.” WHO CARES WHEN YOUR WIFE IS WEARING THAT OUTFIT. 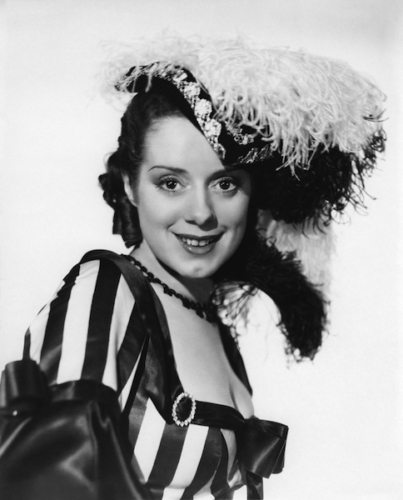 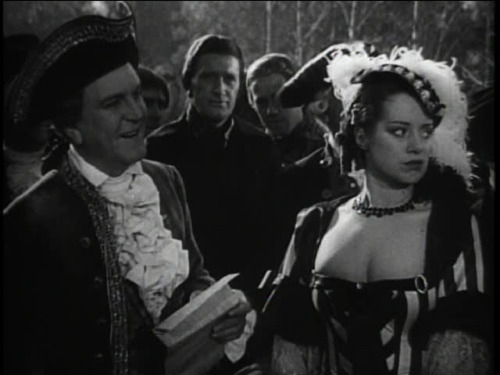 Also, Elsa Lanchester has the best bitchface ever.

Captain Warrington decides to intervene. He rescues Marietta from the guards and gets her a place to stay, even paying her first month’s rent. It’s clear he thinks she’s a hoooooooooor (the St. Pauli Girl outfit kind of contributes), and Marietta is NOT pleased. 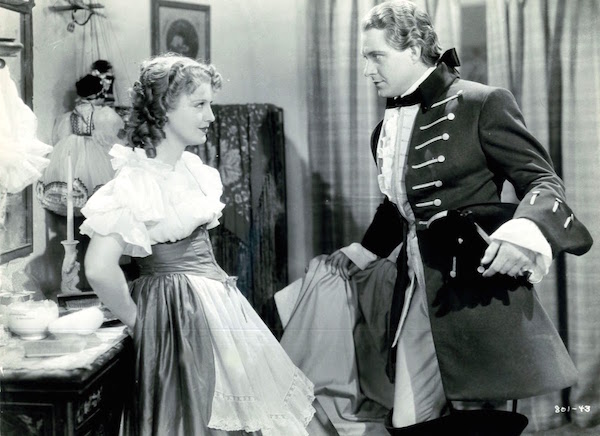 Just then, some super stereotypical Gypsies wander by playing music. Marie/Marietta succumbs to her OCD compulsion, wrenches open the window, and sings with them. Of course, she’s warbling like a nightingale, and so the Gypsies hire her to join their … marionette show. No, that’s not a euphemism. I kind of wish it was.

Warrington starts getting all stalker-y, following Marie/Marietta around town, but she seems into it. They hang. 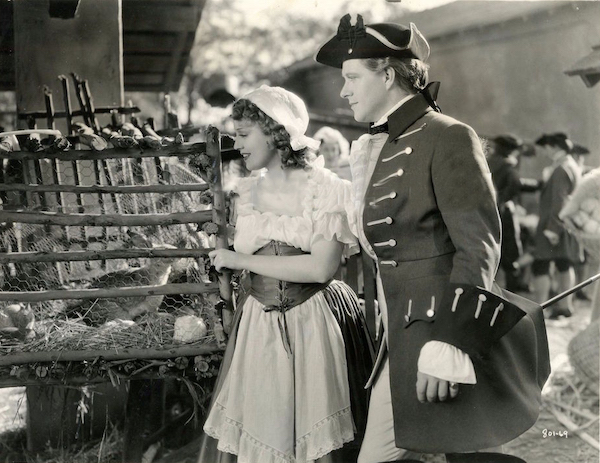 “Allow me to show you all of New Orleans’s glories. Like her chickens.”

Apparently at some point there is a lamb and a bunny. I don’t remember these in the movie, but I very much approve, and so you need to look at photos of each: 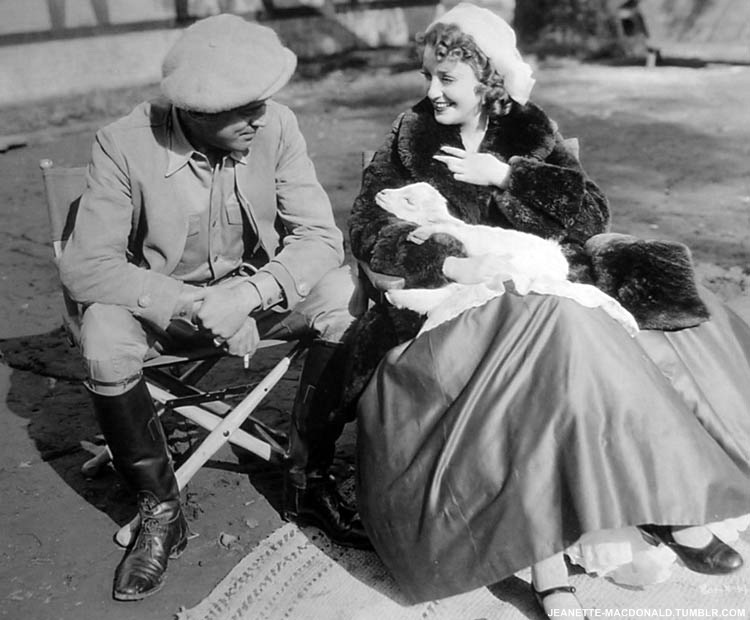 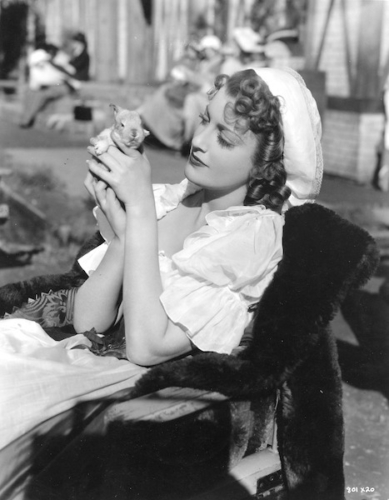 However, in the meantime, her uncle and Spanish fiance have figured out where she is, and the town is on alert. Warrington doesn’t yet know who she is, just that she’s on the run, so he takes her off for a romantic swamp rendezvous where they croon love songs at each other while, I presume, leeches attach themselves to their nether regions. 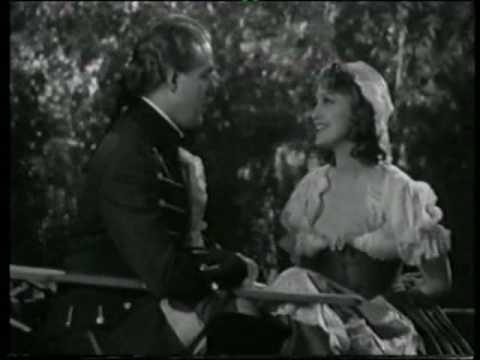 Swamp crooning. What could be more romantic?

Of course, soldiers find them, and Marietta is unmasked as Princess Marie. Her uncle and fiance have SAILED TO NEW ORLEANS to collect her. Damn. That’s commitment.

Of course, when the governor (aka the Great and Powerful Oz) and his wife discover who she is, they get all bow-y and scrape-y. 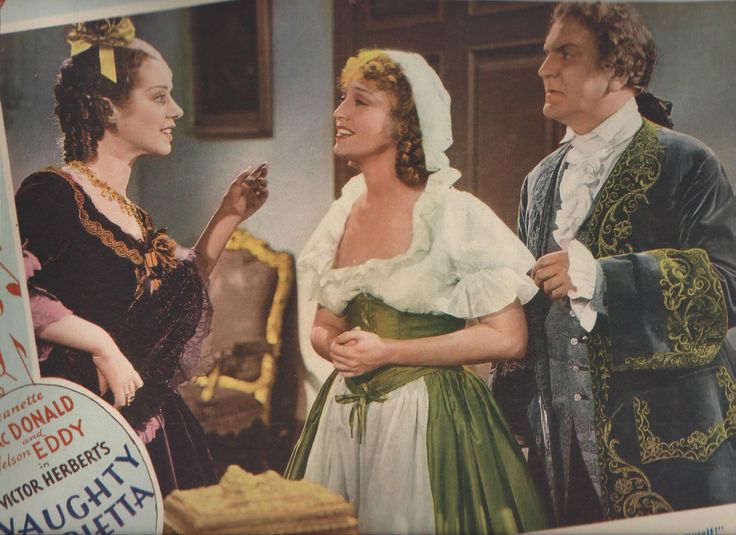 Don’t ask me about Elsa Lanchester’s Shirley Temple hair here. I have no idea.

Her uncle and fiance show up, and of course, the colonials have to throw a ball in honor of all this fancy-pants-ness! But Marie’s uncle warns her that if Warrington shows up, he’s going to get shot. Well, he does show up, but nobody shoots him. 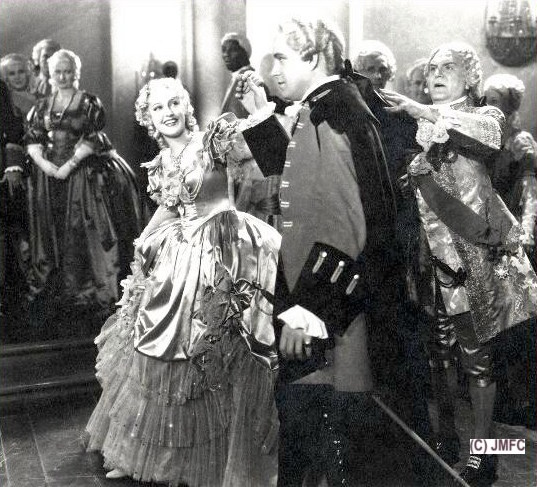 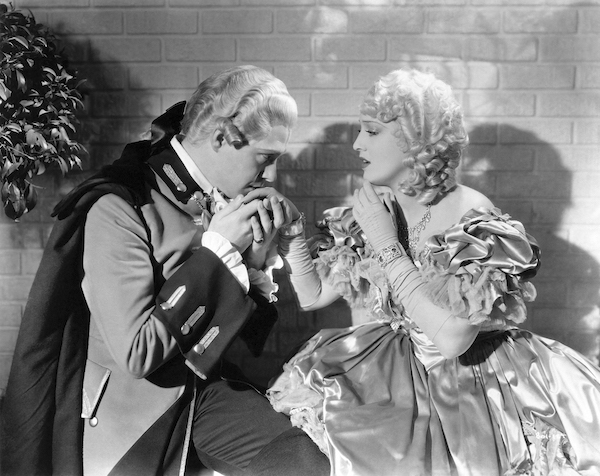 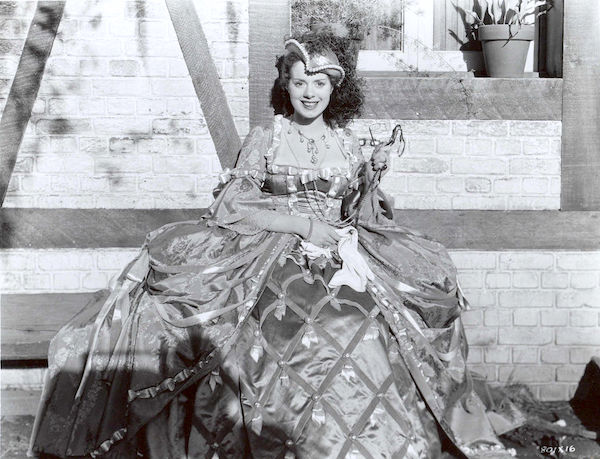 Poor Elsa’s ball dress is a big step down from her stripey number.

Instead, Marie decides to sing a song to him, just to let him know she loves him before she breaks his heart and ditches him for France. Because, you know, she apparently has no ability to reason with her uncle, nor does her uncle understand that RUNNING OFF TO LOUISIANA IS NOT A MINOR THING TO DO.

But Marie’s song is SO GOOD that the two manage run off to the frontier … with Marie wearing this oh-so practical number: 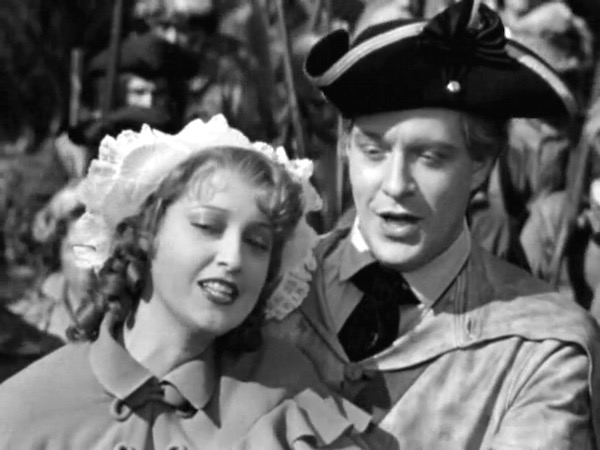 Crooning our way into the wild…