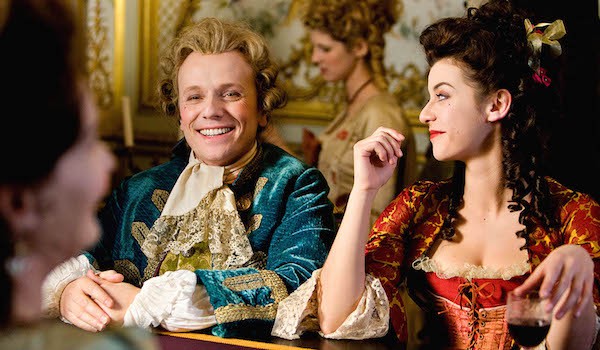 Manon Lescaut is a weird (TV) movie, guys. It’s based on a 1731 French novel by the Abbé Prévost, and the summary is supposed to be “woman ruins relationship/lives because she’s too attached to luxury” but instead it plays out as “woman has sketchy relationship with brother, is pimped out, ruins love affair.” I don’t know, I think something that had Great Cultural Meaning (i.e., the moral implications of luxury and consumption) in the 18th century didn’t translate well here.

Meet the Chevalier des Grieux, who is studying to become a priest and looks like Jamie Fraser’s younger brother. 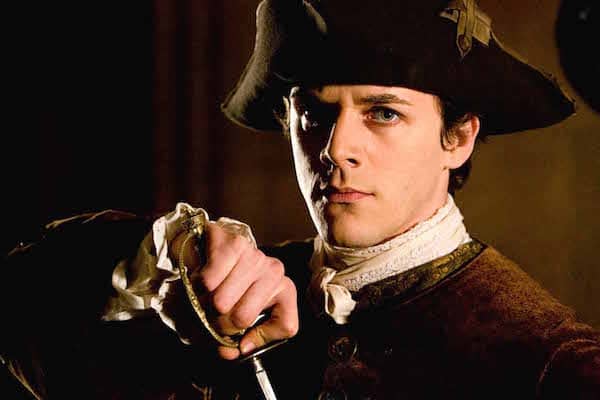 He’s hanging out in front of an inn, and despite it having been established that no floozy can distract him from his studies, spots a floozy from afar and is just In Love Done Over No Contest No Nothing. 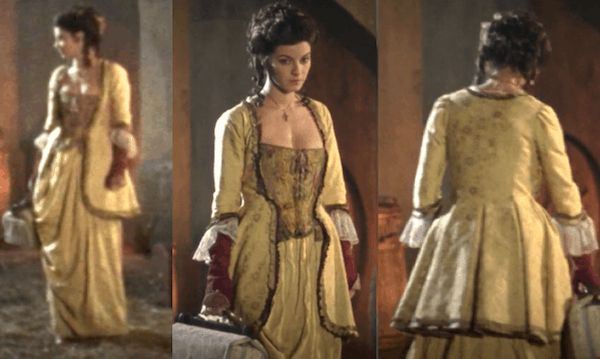 Okay, I like this outfit for 1730s! Nice woven pattern in the fabric, the casaquin jacket style checks out, and I like the shabby gold trim.

He comes over to say hi, she apparently NEEDS TO STRIP IMMEDIATELY STAT RIGHT HERE IN THE INNYARD, he holds up his cloak in some ludicrous moment of chivalry, she drops trou, and he’s hooked. 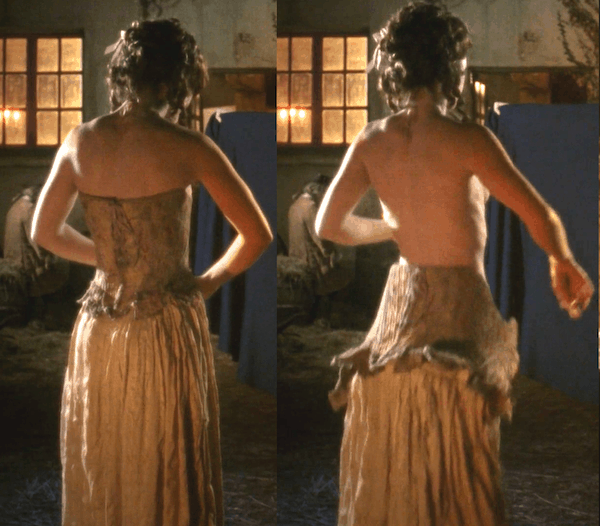 Under her jacket ensemble, she is apparently wearing stays (possibly backwards? Note the V point at the waist?), which she unhooks and then POOF, everything comes off as one garment. No chemise, of course. Gotta get starkers in the innyard. 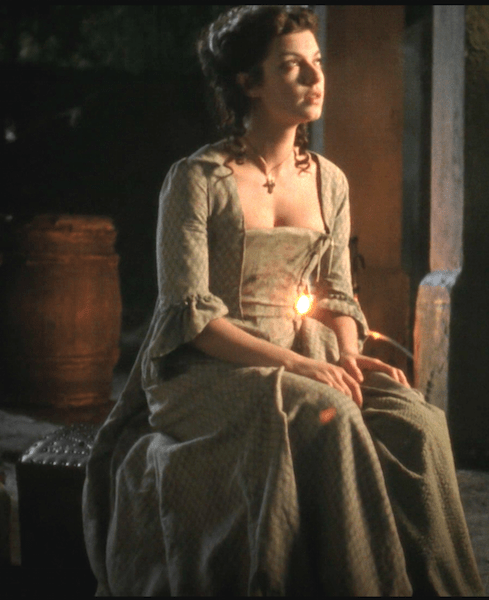 She then shimmies into this boring number. I have no idea why, other than so she could show the chevalier her hooters.

The next day, he shows up in civvies to run off with the floozy — Manon — who is back in dress #1 and wafting Edwardian panties around. 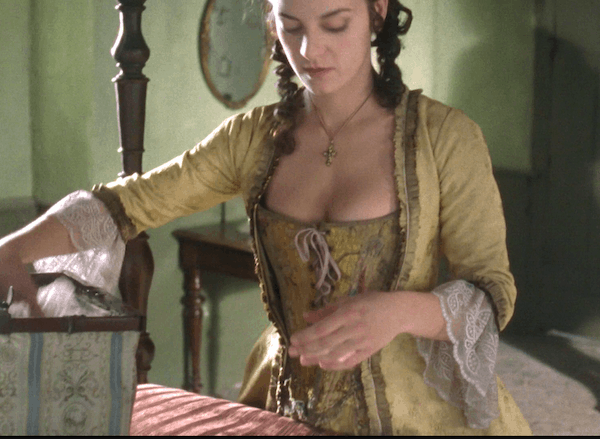 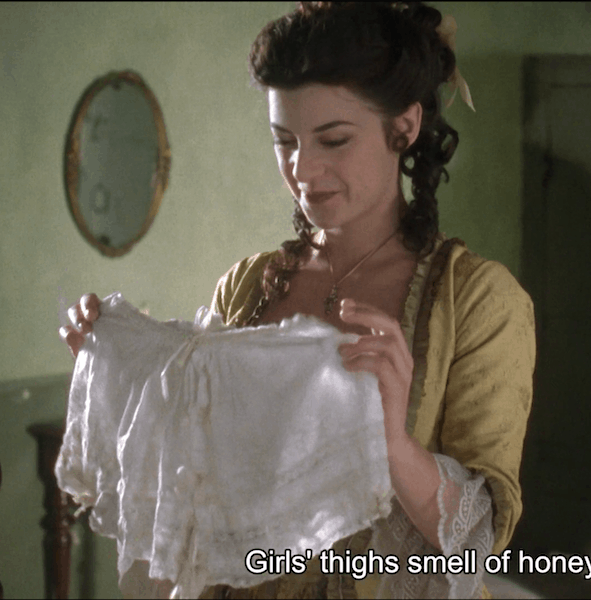 SHE LITERALLY SAYS “GIRLS’ THIGHS SMELL OF HONEY,” SAYS SHE NEVER WASHES THESE, AND THEN HUCKS THEM AT THE CHEVALIER. And I wonder why my milkshake doesn’t bring any boys to the yard.

The costumes were designed by Florence Sadaune (The Queen and the Cardinal, Asterix and Obelix Meet Cleopatra), and they’re sometimes okay, sometimes very odd. Manon is sometimes chemised, sometimes not: 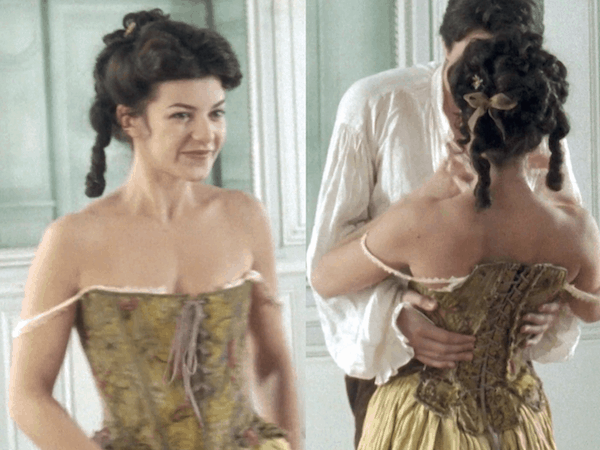 That teeny strap on the chemise is also very Edwardian. Also, I was right about the corset being worn backwards before — note now it has a wide lacing and tabs at the back. 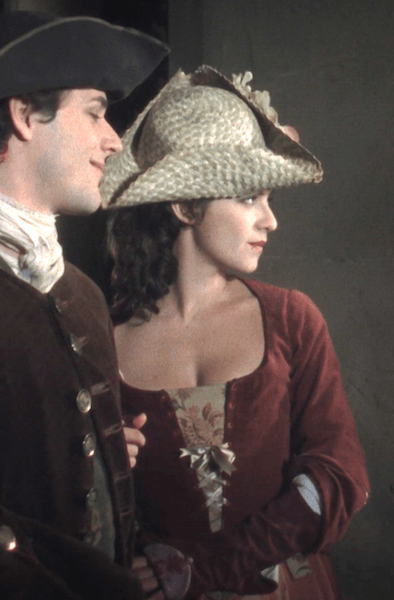 She’s WAY TOO CLOSE to her brother, but decently dressed in a française-type number: 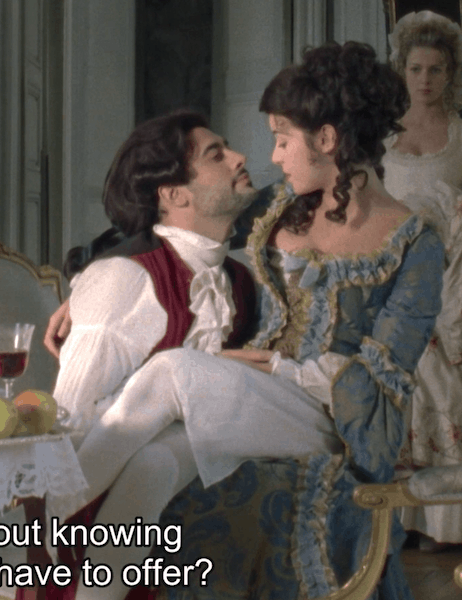 Why isn’t there more of this? 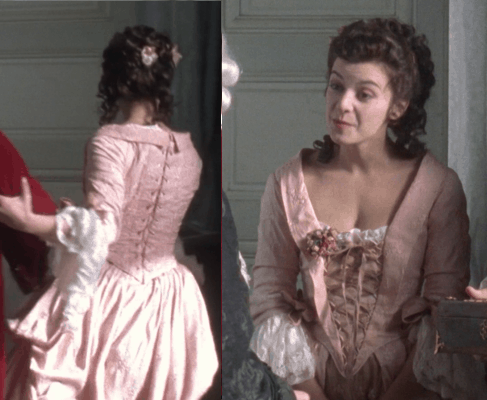 Her brother sells her off to an aging aristocrat: 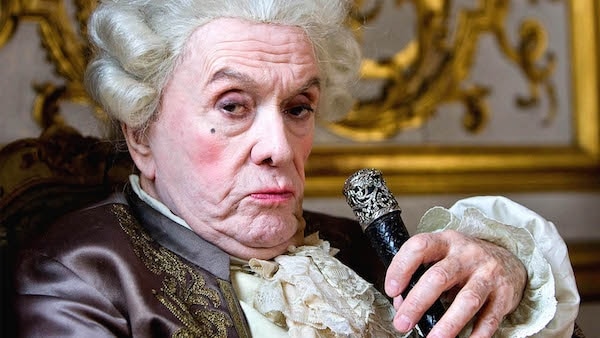 He only gets one suit, but it’s nice.

The maid is Team Zipper: 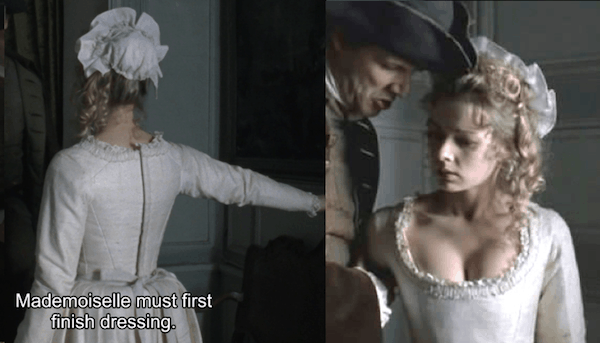 Manon wears a polonaise-type thing as a dressing gown: 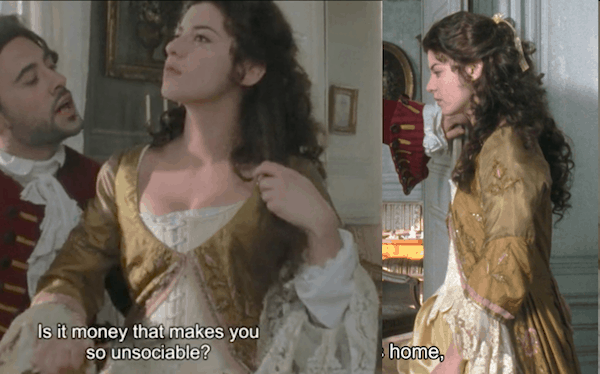 She goes to a ball where her hair goes to center-part crazytown: 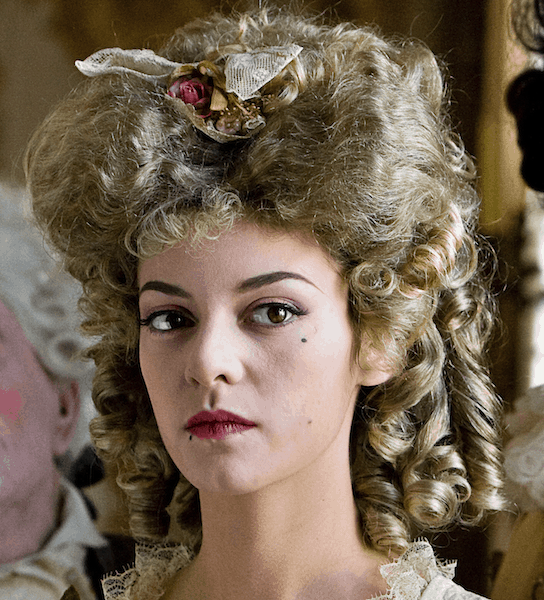 People. PEOPLE!!! 1. Powdered hair does not go from “dark brown” to “ash blonde.” 2. 18th-century hairstyles do not have a center part. 3. Women did not wear full wigs, or if they did, they tried to hide that fact. 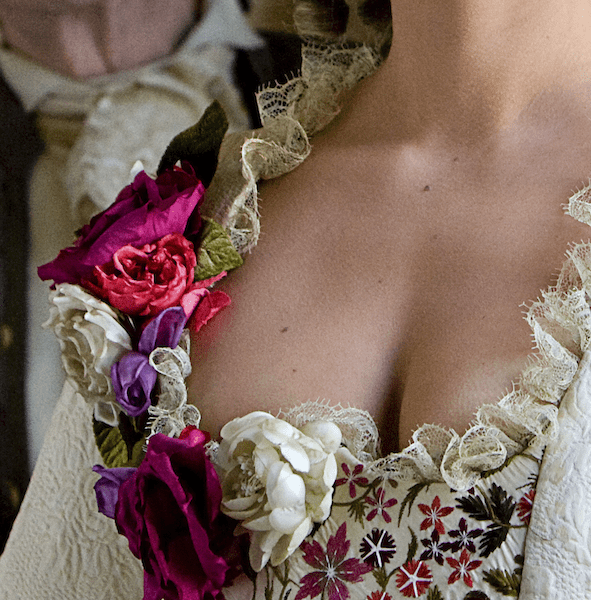 The flowers and embroidery are pretty, they’re just not very period-appropriate. 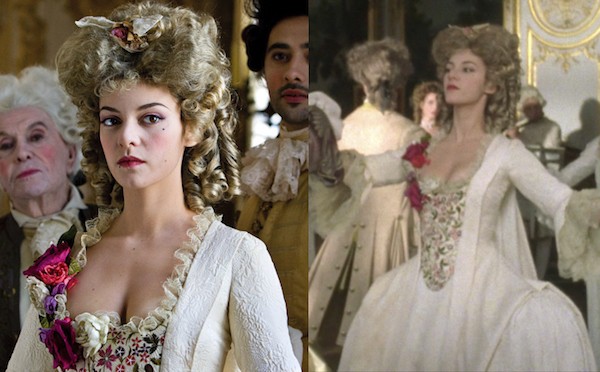 Looks like a decent robe à la française, however. 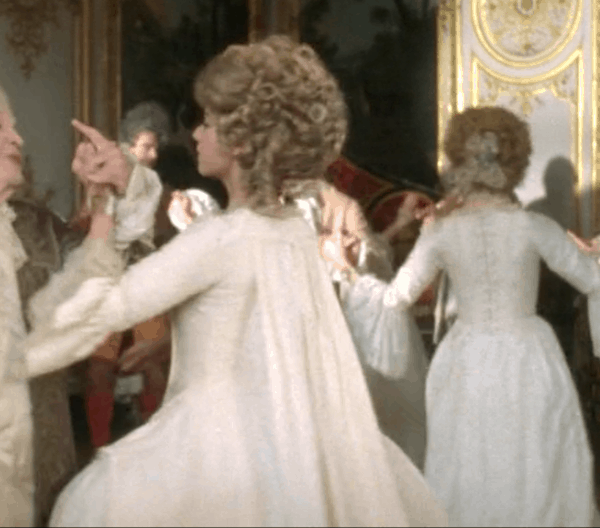 Note back-lacing on the right.

Her brother refuses to shave, even for a poncy event: 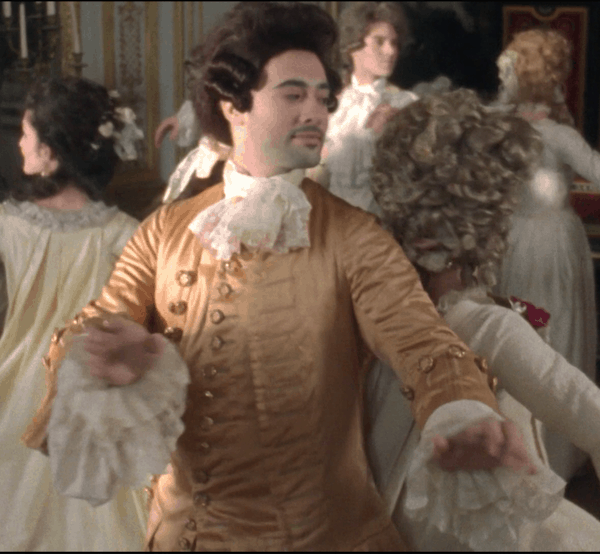 I am poncy! I have a nice satin suit! 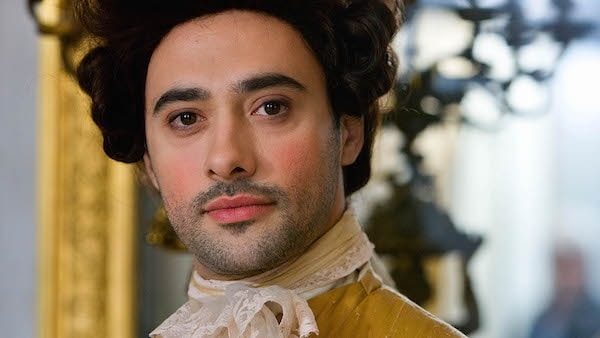 But I am committed to my Miami Vice stubble. 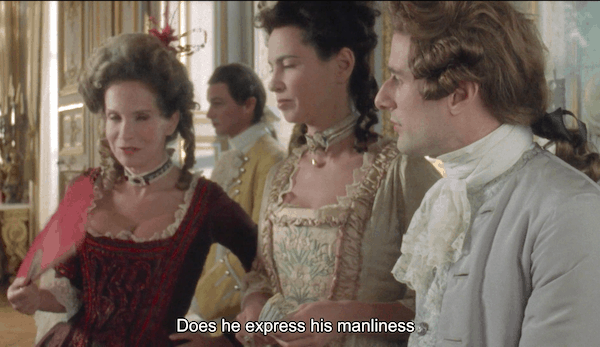 Lookers-on. Questionable hair on the left there. 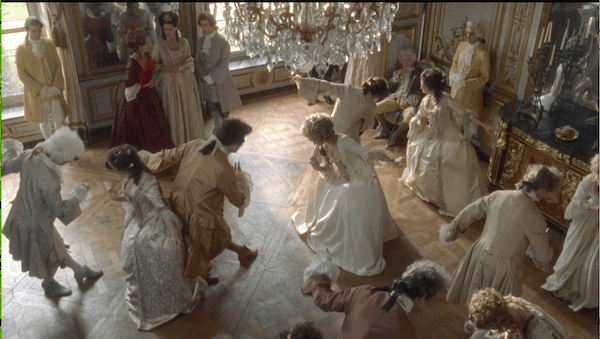 She shacks up with her aging aristocrat lover in a machine-embroidered-fabric dress: 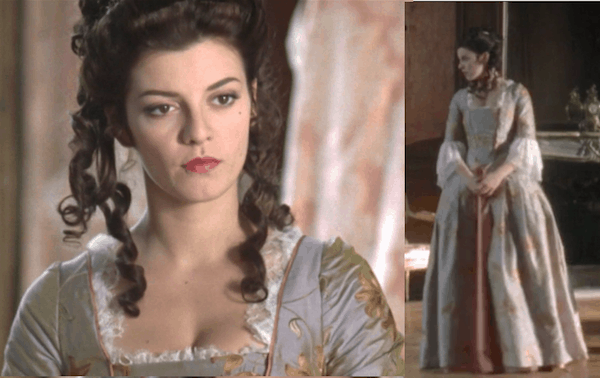 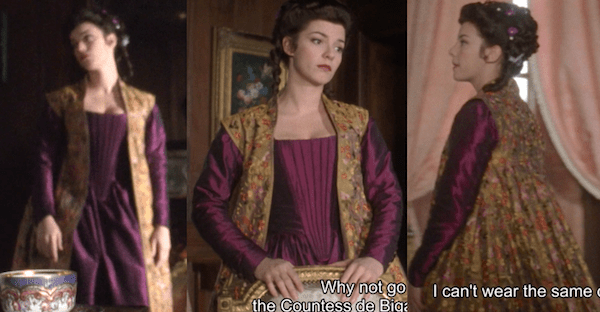 I feel like someone wandered into the costume stock warehouse and got deeply, deeply confused.

Ends up in prison, where she’s rescued by the chevalier and the son of the jailer: 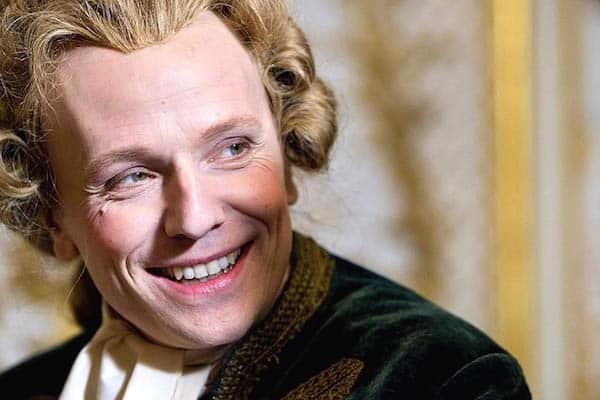 The chevalier has to become a card shark in order to support her and her brother: 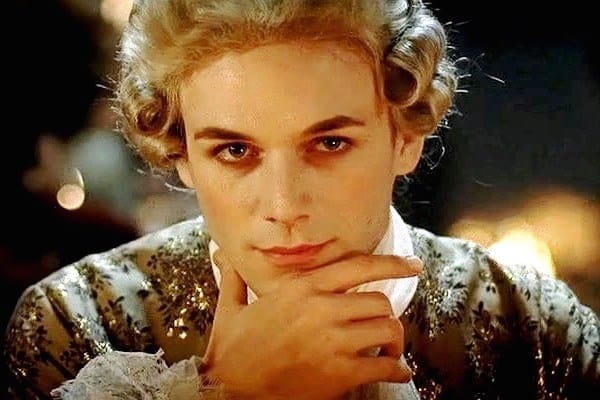 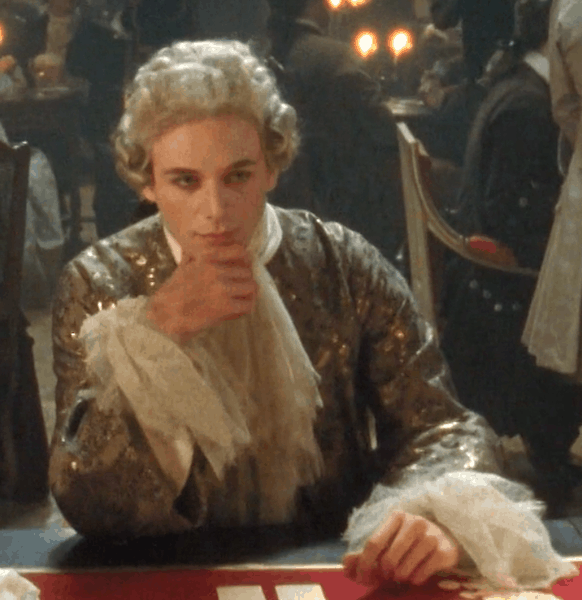 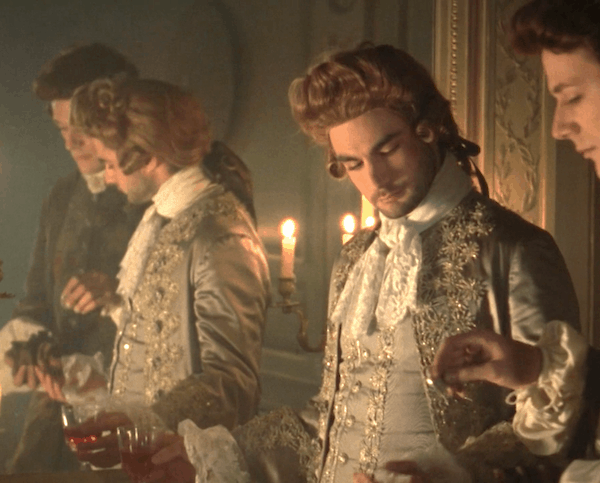 She decides to sleep with the jailer’s son just to be friendly: 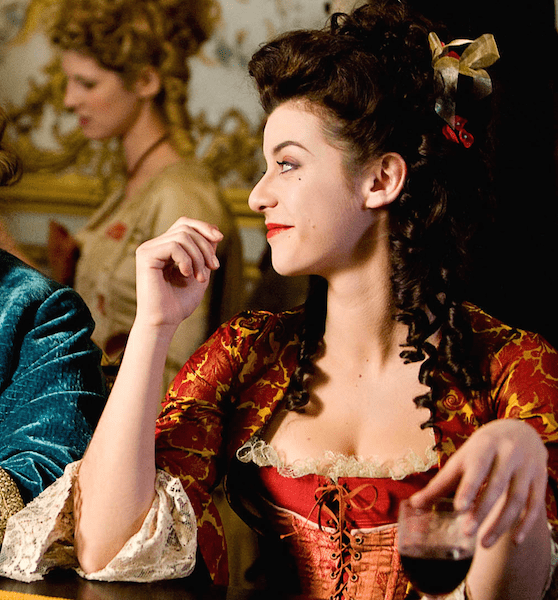 SO MANY QUESTIONS. She’s got two different front-laced corsets? stomachers? with wildly different necklines on under her damask gown. Did they try on the outer layer and realize they needed more boob control?

And things end badly, but I’ll leave something to the imagination.

Can you explain any of these costume choices to me?