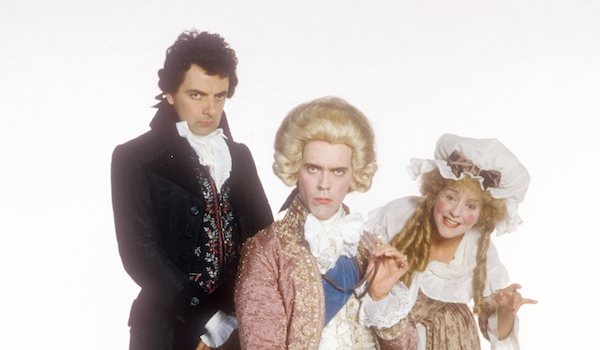 Please, try not to hurt me when I tell you that while I’ve seen bits and pieces, I’ve never sat down and watched ANY of the seasons of Blackadder all the way through. Which is ludicrous, because what I’ve seen is hilarious and also has damn good costumes! So I finally sat down and watched Blackadder the III, the very-late-18th-century set third series, and I laughed and laughed — and at the same time, was reminded of how accurately this series managed to do history AND costumes without losing a drop of the comedy!

As in every series, Rowan Atkinson plays Blackadder — this time, he’s the butler to an INCREDIBLY stupid Prince of Wales, played by Hugh Laurie (known to today’s kids as House). Blackadder is smart and sarcastic; the prince is enamored of extremely large pants. Baldrick is still around as Blackadder’s lowly servant and general punching bag. And then there’s Mrs. Miggins, who runs the pie shop (apparently a joke from the second season, which I have yet to watch most of. I suck!). 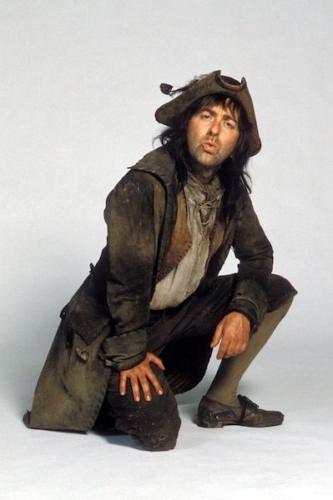 Baldrick: the best butt-of-a-joke EVER.

This show is seriously comedy gold. Atkinson does sarcasm like nobody’s business, and Laurie shines as the stupidest man in the universe. Plus, there’s lines like, “Oh, something’s always wrong, Balders … the fact that I’m not a millionaire aristocrat, with the sexual capacity of a rutting rhino, is a constant niggle.” 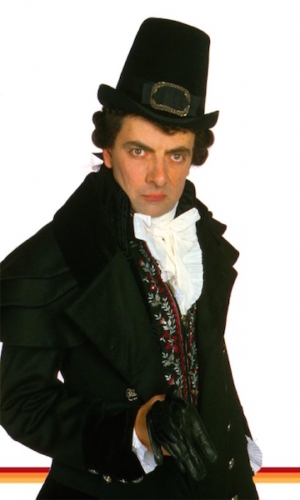 Do not irritate Blackadder. He will cut you down to NOTHING while we all laugh at you.

You’ve got also cameo appearances in different episodes by hilarious actors like Stephen Fry as the Duke of Wellington and Miranda Richardson as an heiress with a secret. 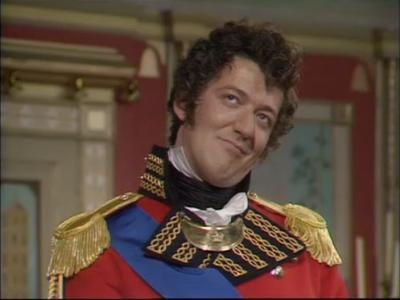 I was seriously impressed at how well this show managed to make the plots be all about historical events and themes and yet still absolutely hilarious. Most modern filmmakers are so concerned with making things “relevant to a modern audience” and “accessible to a modern audience.” They really should go back and watch this series for a major lesson in how actually (gasp) sticking to the history can WORK. You’ve got plots about royal funding, rotten boroughs, the Enlightenment, the French Revolution, and highwaymen. And they are HILARIOUS.

The costumes were designed by Annie Hardinge, who also designed for Austenland (2013) and a whole bunch of modern-set British comedy TV and films. The wardrobes are somewhat limited — the prince is pretty much always in the same suit — but they are well made, historically accurate, and suit the characters, so it’s really not a big deal. 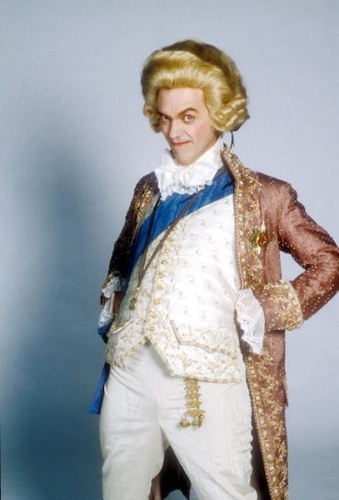 Hugh Laurie as the Prince of Wales. CHECK OUT THAT EMBROIDERY. STUNNING.

The hair is a little bit (ahem) interesting — in particular, the prince’s wig is really shiny and overly large, although I think it’s for comic effect. 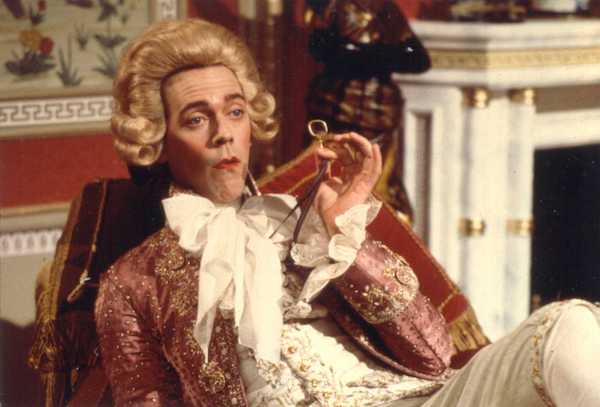 Prinny’s wig is bordering on 1960s bouffant. The poufiness IS appropriate, as are the side rolls (buckles) — it’s just too big on top, and has a weird Marcel wave (1930s), and needs powder. 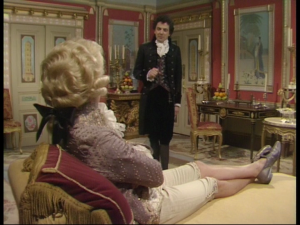 Here you can see that Marcel wave better.

Other foppy characters, like these two actors, get ridiculously OTT wigs too: 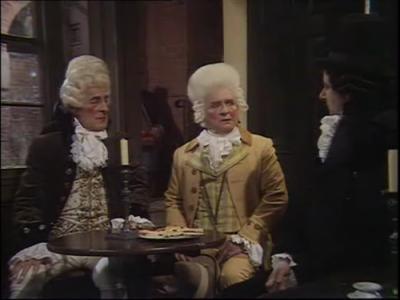 I did get twitchy at that giant roll around the face on the Comte de Frou Frou’s wig (see my rant about face-eating wigs): 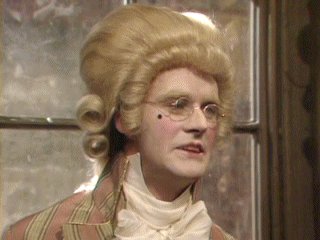 The women’s costumes are quite well done. Mrs. Miggins gets two main dresses: 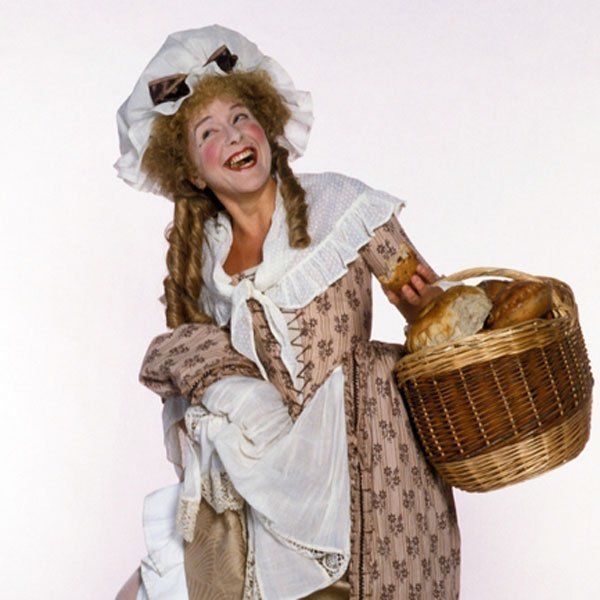 This one is fine, although it doesn’t EXCITE me. 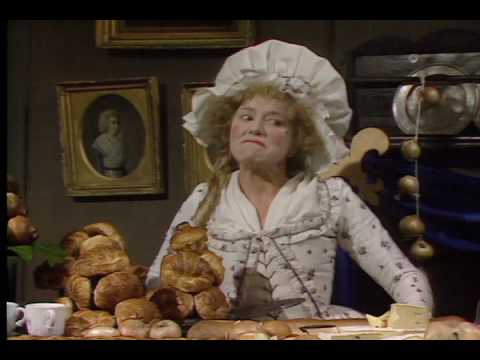 This one, however, I LOVE. The fabric! The trim! The waistcoat effect! Sadly it’s incredibly hard to find a full-length shot of this dress, which was reused in many other productions. 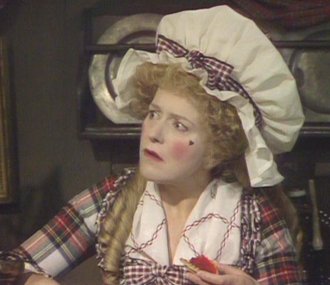 And in one episode, she goes all Scottish.

And Miranda Richardson gets a GREAT blue and white stripey dress in her episode, again with a waistcoat effect and a lovely quilted petticoat. This dress was also reused multiple times, including in The Affair of the Necklace! 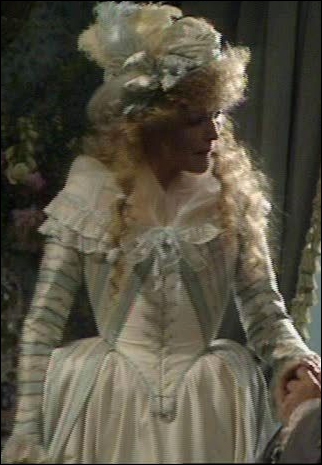 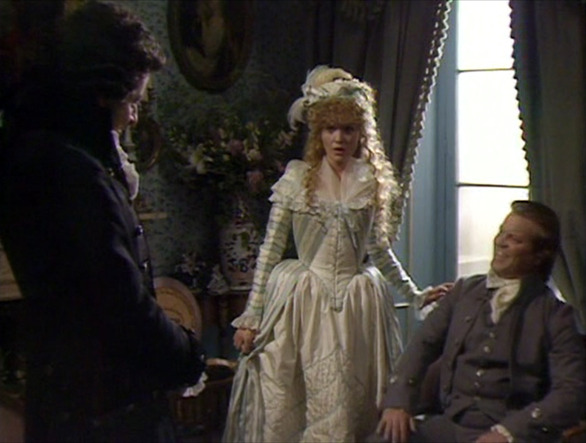