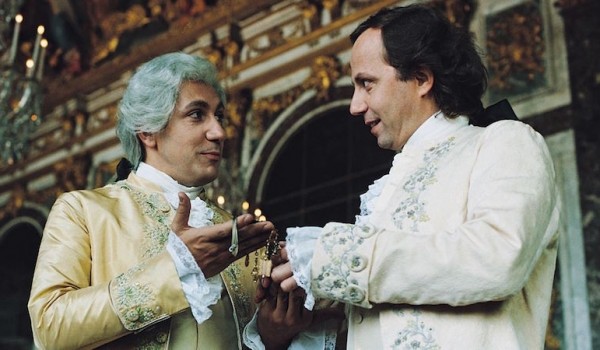 Beaumarchais l’Insolent — aka Beaumarchais the Scoundrel — is a 1996 French film about the life of Pierre Beaumarchais, a late 18th-century intellectual, inventor, playwright, and spy. He’s best known for writing the three Figaro plays (including “The Barber of Seville” and “The Marriage of Figaro”), which were culturally influential in promoting the anti-aristocratic thinking that led to the French Revolution.

I’m in Paris on vacation, and the Petit Palais museum is hosting two 18th-century art exhibitions and showing 18th-century films as an accompaniment. Since this movie has been on my 18th-Century Quest list for a while, and I’ve yet to find a decent copy in the States, I thought I’d better see it while I had the chance. Unfortunately my French isn’t quite fluent enough to keep up with rapid fire dialogue, so I definitely missed a lot of nuance (I made a point to read up on Beaumarchais before seeing the film, which helped).

Overall, I found the film entertaining if not overly inspired. Beaumarchais is, as the title of the film suggests, a scoundrel. He writes plays that get him in trouble with the government, has amours with actresses that land him in duels, and is a generally saucy wit. After a legal battle, he ends up deprived of his civil rights, and King Louis XV enlists him to be a spy in London in order to have his rights restored. So there’s lots of banter and theater and general shenanigans. 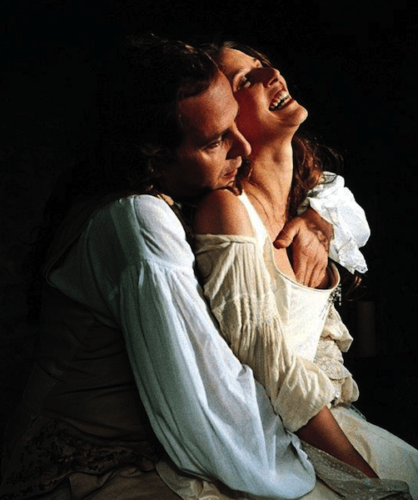 Are you getting the shenanigans vibe yet?

Costumes and Hair in Beaumarchais l’Insolent

The costumes were designed by Sylvie de Segonzac, who also designed Marie-Antoinette, la Véritable Histoire (2006) and Murderous Maids (2000). And here’s where I tell you it’s the proverbial mixed bag: some things they did very well, others were somewhat odd, and only two things made me WTF.

The film spans 1773-75, and therein lie some of the problems. First, let’s look at French fashions of that period. In both images below, note the women wearing silk dresses — robes à la française and anglaise (check my rant on back-lacing if you need a guide to women’s dresses of the 18th century) — open in front over stomachers with some level of hip fullness. Everyone’s hair is powdered, and the men are either wearing wigs or at least have their hair styled short in front, rolls over the ears, and long in back: 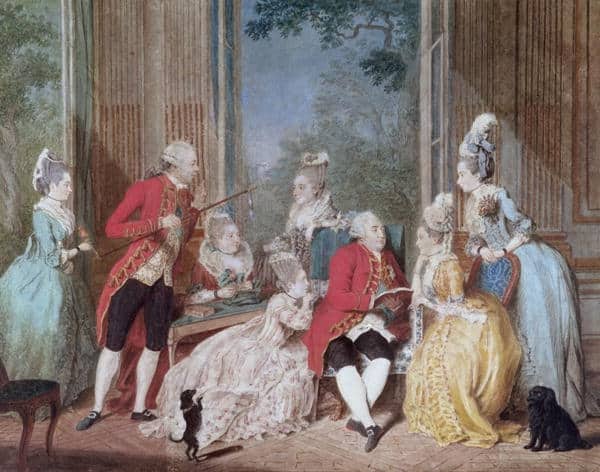 The salon of the Duke of Orléans (sitting); he is with his son (standing) by Louis Carrogis Carmontelle, c. 1770 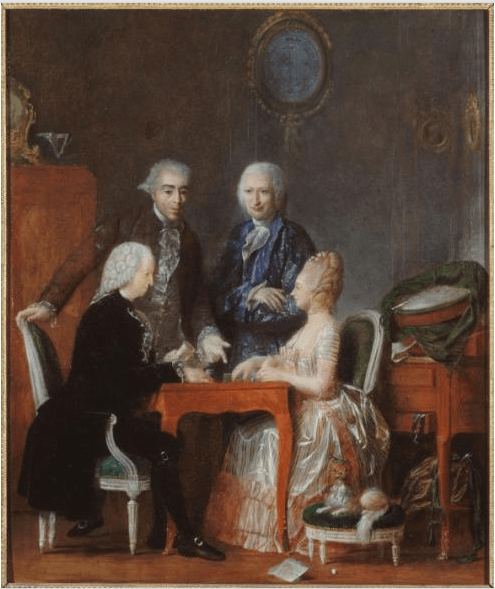 La partie de trictrac by Jean François Garneray, c. 1780 [I’d be shocked if this was really that late, I’d say early 1770s myself based on the hair], Musée Carnavalet 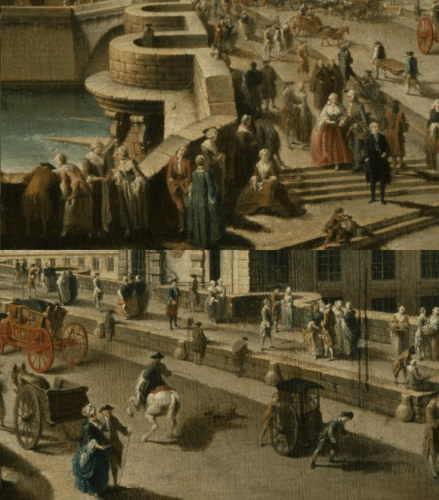 Now let’s look at the film: 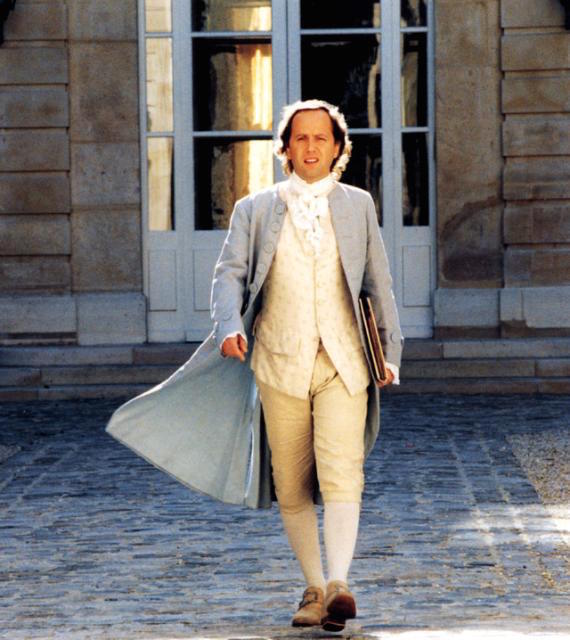 In general, the menswear was nicely made and appropriate to the period… 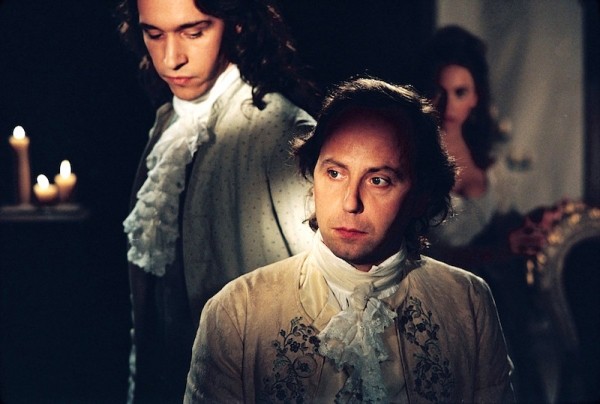 with nice details like embroidery, good shirt ruffles, and more. 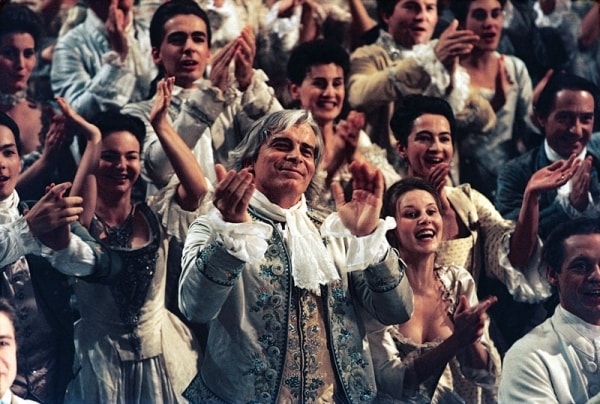 Loooove the embroidery on this coat! 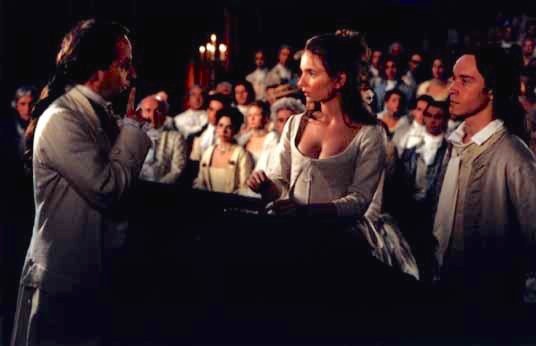 However, most of the women were dressed in more 1780s wear, like this cutaway bodice seen here… 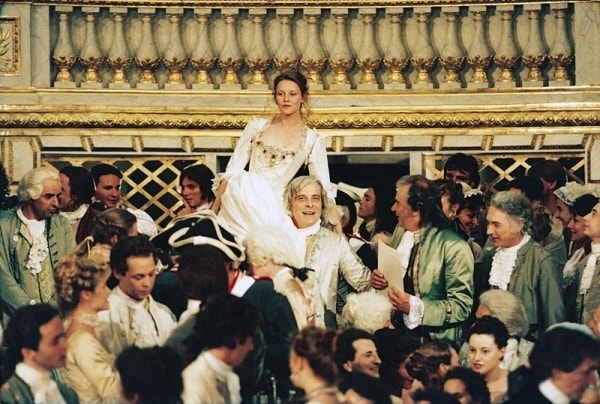 Except for this number, which had, I shit you not, FRONT, BACK, AND SHOULDER LACING. AND I SWEAR THEY USED A SHOELACE FOR ALL THAT LACING.

Plus there was waaaaay too much chemise-off-the-shoulder in casual situations, like on this actress during rehearsals…

And at least wife Marie-Thérèse’s chemise is on the shoulders, but why is she sitting around in her stays while hanging out with Beaumarchais’s assistant?

Side note, Marie-Thérèse, Beaumarchais’s wife, was a dead ringer for a young Celine Dion. 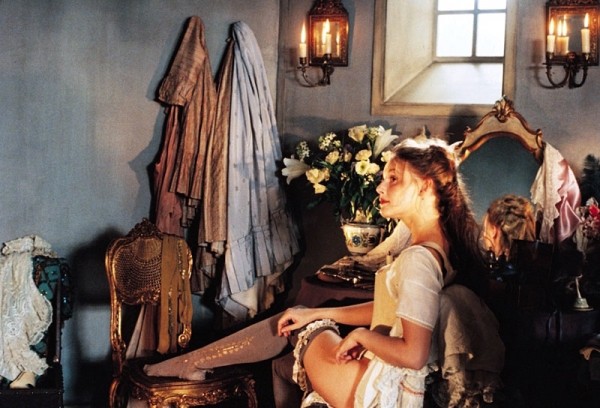 I did like this scene of an actress in her dressing room, as she’s in historically accurate undies — chemise, stays, stockings, and nothing else! 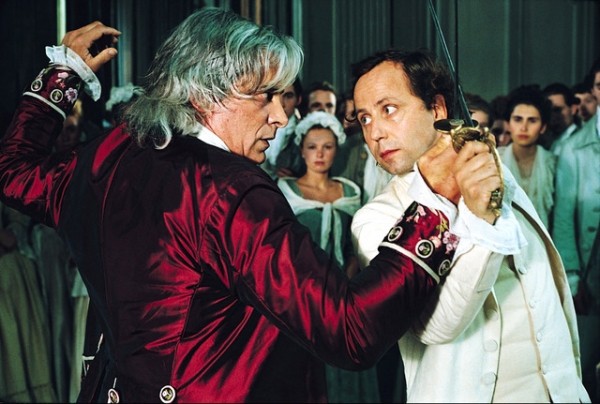 The color palette was also super neutral, which seemed weird. This red coat was really the ONLY splash of color in the entire film. 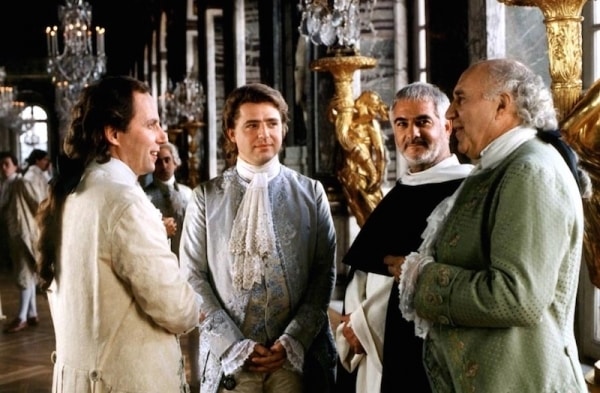 I had a lot of problems with the hair (you’ll be SO surprised). This is at Versailles. Beaumarchais is on his way to meet King Louis XV. Notice anything missing?? 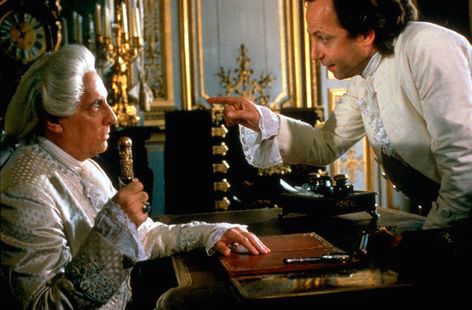 Only very few characters ever wore wigs in an era when wigs would be de rigueur. At least the king (left) is wearing one. 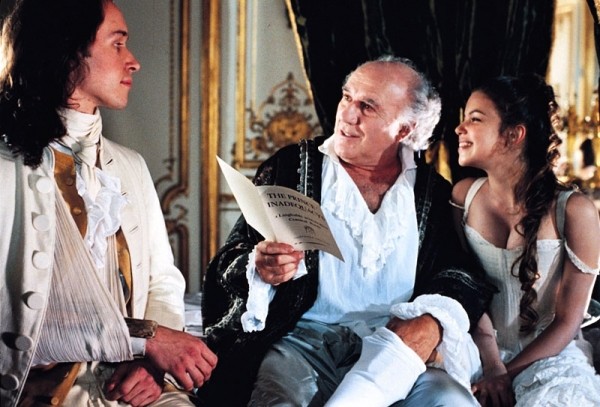 The further problem I had was that NONE of the men wore their hair styled into an 18th-century appropriate style (with side curls at the ears). Many of the men would have long or long-ish hair, but it was just shaggy and laying there. 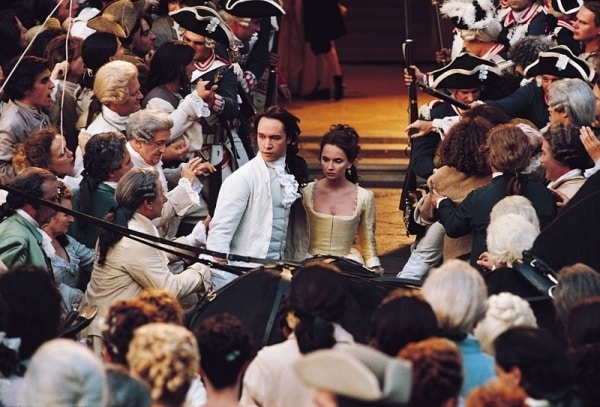 Crowd scenes were better for showing wigs, but then WHYYYYY didn’t anyone ever wear a hat??!! 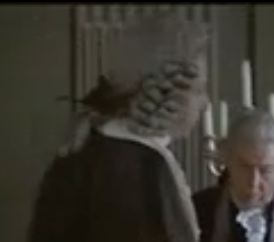 Beaumarchais DID wear a great wig while working as a magistrate, so they clearly had the technology. I did like how he very clearly put this wig on as a professional accessory. 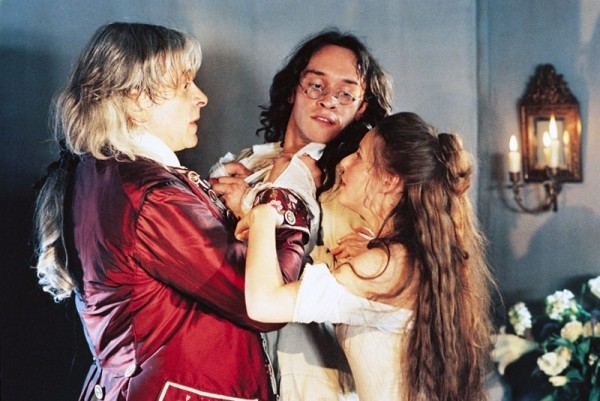 The women’s hair was Not Great. She’s mid-dressing, so she can have a pass for all that hair down.

But almost all of the major female characters spent their time in vaguely 1740s-50s updo’s, some with more unnecessary tendrils than others. 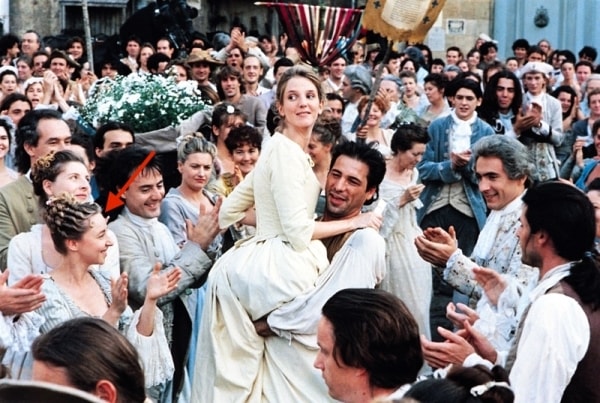 And then the occasional extra would have fabulous, if 1750s, hair! 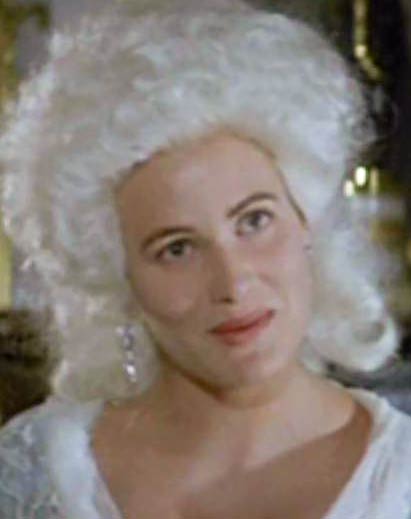 And DON’T even get me started on the hair on Judith Godrèche (in a bit part) as Marie-Antoinette.

And now, finally, I want to talk about two specific female characters:

When Beaumarchais goes to London as a spy, he meets the famed Chevalier d’Eon, a French spy who first lived as a man and then as a woman. First, let’s look at the real Chevalier: 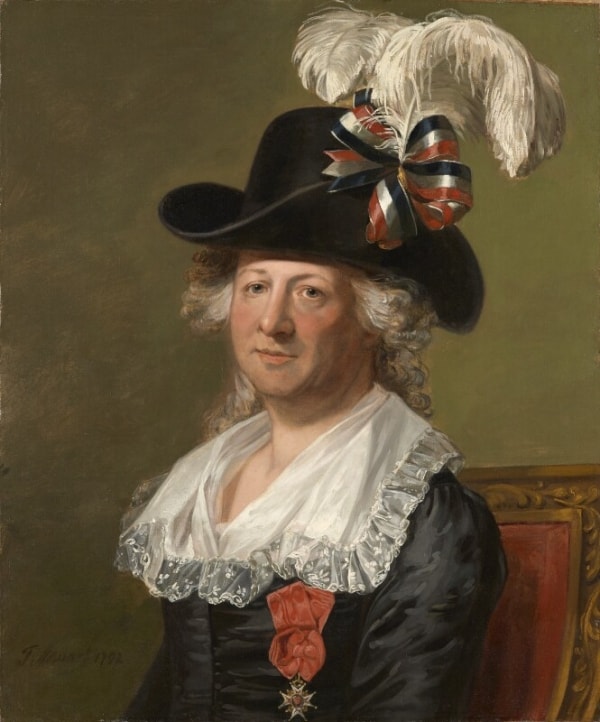 And then compare them to the film version: 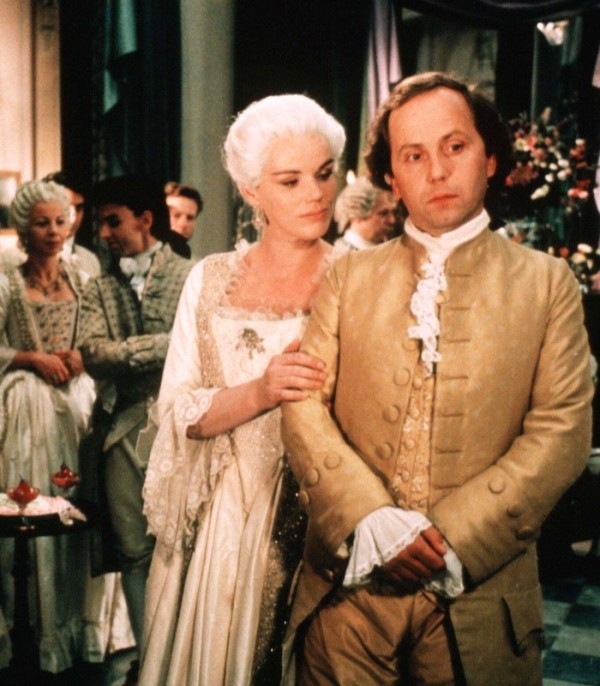 SUPER feminized, I think in order to help the audience deal with the fact that Beaumarchais flirts with them.

AND WHAT WAS UP WITH THE CHEVALIER’S EYEBROWS. That is not On Fleek by 18th-century standards.

And then, there are two quick scenes featuring famed court painter Elisabeth Vigée Le Brun. Once again, let’s look at the real deal: 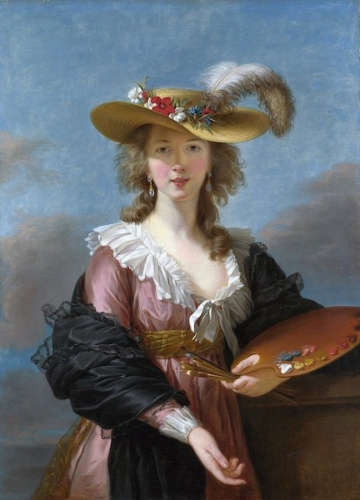 And again, the film version:

I literally LOLed when this came on screen. 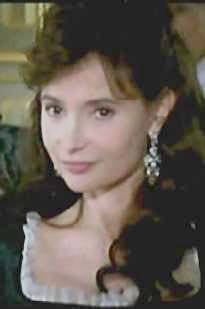 I feel like I’m looking at Susanna Hoffs of The Bangles!

Have you seen Beaumarchais l’Insolent? Which other French 18th century-set films should I make sure to track down?