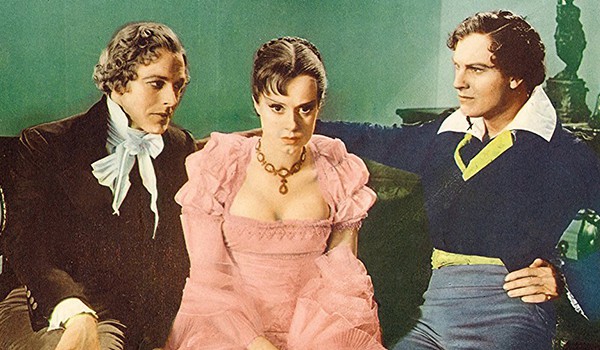 It may well be the Ur-Story for goths and horror fans — that fateful summer in 1816 when Mary Godwin Shelley and Percy Shelley crashed Lord Byron’s villa at Lake Geneva, Switzerland. Along with hangers-on, Claire Clairmont (pregnant by Byron) and Dr. Poldori, the group formed a somewhat debauched and bored party during the endlessly rainy season. They started reading ghost stories, and Byron suggested they each write their own spooky tales. The most famous result was the first draft of Mary’s Frankenstein, although Poldori’s short story The Vampyre deserves a nod for at least helping inspire Victorian vampire fiction like Carmilla and Dracula.

That summer by the lake and the birth of Frankenstein has been immortalized in historical costume movies several times, briefly and in depth. With Mary Shelley’s own biopic finally coming to theaters this weekend, let’s remember this seminal moment that helped make her famous. This sequel to the popular monster movie is framed by a historical flashback of Mary Shelley, Lord Byron, and Percy Shelley discussing her novel on a dark and stormy night. Nobody says it’s Lake Geneva 1816, but I’m including it for the resemblance. Mary (played by Elsa Lanchester who also plays the eponymous bride) tells the gentlemen that her Frankenstein story isn’t finished, and thus the movie begins. The first feature film to really go to town with that 1816 summer, and director Ken Russell does his Ken Russell-y best to make it freaky and acid-trippy (if you’re not familiar with his work, this flick is a prime example of his indulgent histrionics). Natasha Richardson plays a straight-laced Mary Shelley, while Gabriel Byrne is a crazed mastermind Byron and Julian Sands is a very pretty Percy Shelley. A cheaply made, weakly scripted take on the Lake Geneva summer and its aftermath, less about Frankenstein and more about Lord Byron’s womanizing. A young and mullet-haired Hugh Grant plays the feckless Byron, while Lizzy McInnerny is the struggling writer Mary Shelley. It’s the ’80s Brat Pack second-stringers as Romantic Poets! OK, it’s not that bad, that’s just what it looks like with Eric Stoltz (Mask, Some Kind of Wonderful) as Percy Shelley, Alex Winter (Lost Boys, Bill and Ted’s Excellent Adventure) as Dr. Polidori, and Laura Dern (Mask, Blue Velvet) as Claire Clairmont. Oddly, it’s the principle actors, Philip Anglim as Byron and Alice Krige, who aren’t as obviously ’80s teen stars. Anyway, this movie is a more romantic telling of story than Gothic, and maybe it was trying to be less art-house freaky. Lastly, and coming full circle, Mary Shelley, Percy Shelley, and Lord Byron appear in this horror flick to reengage with Mary’s Frankenstein tale. In this twist on the tale, a mad scientist goes back to 1817 Switzerland, meets both the Romantic poets, and discovers that Frankenstein is a real monster. Not exactly the Lake Geneva summer, but it’s reminiscent enough so I’m including it. Also, it amuses me that the lead singer of the band INXS, Michael Hutchence played Percy to Bridget Fonda’s Mary.

Are you familiar with the 1816 Lake Geneva summer of Byron, Mary, and Percy Shelley?